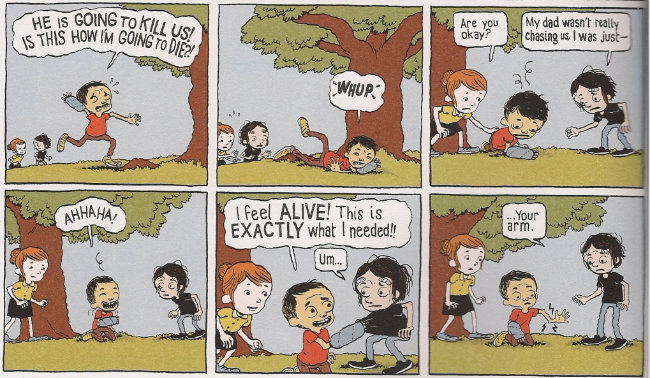 Talk of Richard Thompson's retirement from his Cul de Sac newspaper strip brought to mind the above romping kids comic from Joseph Lambert, whose Annie Sullivan and the Trials of Helen Keller, a biographical comic presented by the Center for Cartoon Studies, has achieved an unexpected unanimity of critical praise in the past year, including fresh plaudits just yesterday from Rob Clough. I read and enjoyed the book myself, though the intuitive techniques Lambert employs to convey sensation's data might have the effect of overshadowing his lively straight-on cartoon chops, as demonstrated here.

It's a detail from Lambert's contribution to the recent Nobrow 7: Brave New World, the latest edition of the house anthology for UK publisher Nobrow, at or near the fore of the present leap of interest in British independent comics. Appropriately, the Nobrow anthology has assumed the position of Big Prestige Book, presently standing at 9" x 12", with 128 color pages split between comics and illustration; unlike the Blab! of yore, Nobrow takes on a flip format, segregating its two halves and betraying, perhaps, some anxiousness about the all-illustration format it observed until Nobrow 6. I generally don't pay so much attention to the illustration half -- my tastes run more toward the Le Dernier Cri end of things -- but the comics section has grown to encompass quite a lot of impressive talents, including Joost Swarte, Anders Nilsen, Jillian Tamaki, Eleanor Davis and Michael DeForge in Nobrow 7 alone. 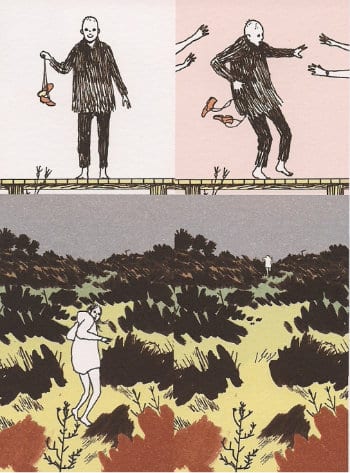 Still, there is a little in the way of speculative crossover, evidenced by this unsequential detail from a piece by Henry McCausland, a UK-based illustrator and animator whose comics work are totally unfamiliar to me; I don't even know how much exists. Still, there's strong hints of C.F. and Blaise Larmee in his story, at least to his character designs, which float delicately above patchwork color fields - the stark b&w of his character art additionally leaves a certain Al Columbia impression. Strange to see such strong commonalities only arise in a comic. 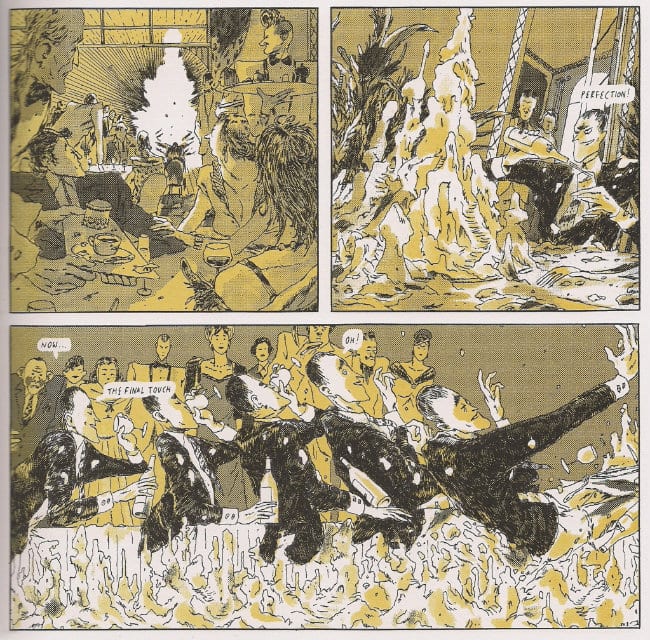 Otherwise, I greatly enjoyed the above piece (detail, again) from Belgium's Sam Vanallemeersch, who shows a fine command of movement in detailing diner Franz's journey into his supper with the aid of pills and wine. The Brave New World theme is often raised by the contributing artists as an ominous future, though Lambert focuses on the simple promise of childhood discovery. Only Vanallemeersch, however, seems especially concerned with diving into the properties of motion in comics, a most applicable subject matter for an artist working in an illustrational vein in an anthology still halfway between illustration and comics. That is the future of Nobrow, it seems, that and a secret narcotic kingdom of mashed potatoes, to which I long to escape on every lunch break I can find. 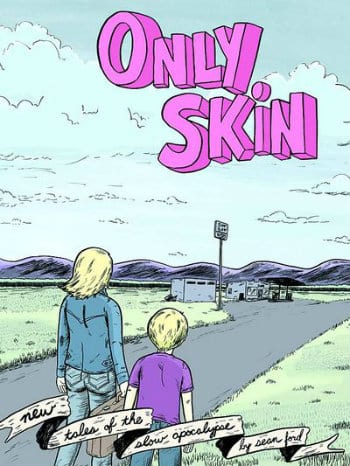 Only Skin: Talk of the Center for Cartoon Studies and anthologies raises the issue of the student/alum-edited Sundays series (presently up to vol. 5), to which Joseph Lambert was a contributor. Among the editors is Sean Ford, who is just now seeing his debut book collection released by Diamond, an 8.5" x 11", 272-page Secret Acres-published "...grim exploration of the hallucinatory and tragic landscape of modern rural America, as seen through the eyes of a pair of orphaned siblings, searching for answers in a world filled with terrible, terrible questions." It's compiled from a seven-issue self-published comic book series of the same title, but with 40 new pages and extensive edits and re-draws, which makes it very much flip-worthy at your adventurous shop tomorrow. Samples; $21.95. 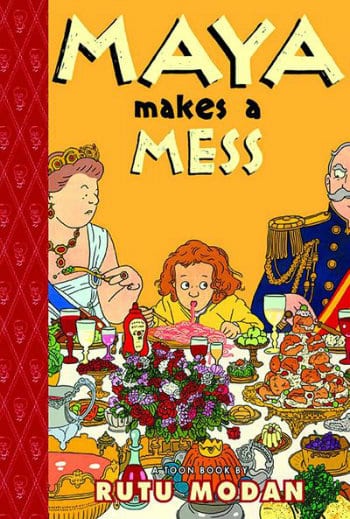 Maya Makes a Mess: DAMN IT, MAYA. Yet, in her juvenile sloppiness, Maya reveals some truth, i.e. the facts about what Israeli cartoonist Rutu Modan has been doing, having released the graphic novel Exit Wounds to eruptive acclaim in 2007, and followed it quickly with a New York Times magazine serial (The Murder of the Terminal Patient) and a short works collection (Jamilti and Other Stories), both in '08. This one's a 32-page hardcover children's comic from Toon Books about a little girl whose sloppy-ass manners cause a kid-appropriate uproar at a royal function. Don't underestimate the Toon Books line; R. Kikuo Johnson's The Shark King was secretly among the best action comics of 2011 in terms of sheer visual bravura, though I suppose the children's storybook pricing as much as the subject matter kept it out of the hands of adult connoisseurs of the stuff. Samples; $12.95.

glamourpuss #26: I am now finding absolutely no external confirmation of this, but unless I'm completely misreading writer/artist Dave Sim's applicable Kickstarter updates this appears to be the final issue of his fashion magazine parody/history of photo-realism comic strips project, with the ongoing story to be eventually collected and completed as a graphic novel under the title of The Strange Death of Alex Raymond. Do not expect a replacement comic book series, as Sim's attentions seem to have turned to the digital arena for the time being; $3.00.

Economix: How and Why Our Economy Does and Doesn't Work: Anybody who's ever wondered about the legacy of Larry Gonick will want a look at this 304-page Abrams release, a Michael Goodwin-scripted tour of economic function that's very much in the Cartoon Guide to... mold (more from the Journal's Chris Mautner here). Art by Dan E. Burr, whom you'll recall from Kings in Disguise with James Vance. Preview; $19.95.

Classics Illustrated Vol. 16: Kidnapped: I don't keep very close track of what NBM/Papercutz is doing with the Classics Illustrated brand, though I know they've retained some interesting names. For example, here's a 56-page Robert Lewis Stevenson adaptation by 2nd gen. underground/"ground level" comix artist Mike Vosburg (Death Rattle, Bizarre Sex, Star*Reach), whom I remember best as artist of the old Christy Marx-written Epic fantasy series Sisterhood of Steel. I do believe this material was initially slated for First Comics' old Classics line in the early '90s, and is just now emerging from the crypt. So yeah: color, seafaring, etc. Preview; $9.99.

Dorohedoro Vol. 7: Not an awful lot in the way of manga this week (or, rather, not too much that catches my eye; I mean, new Gantz, for instance), so I'll just draw attention to the new Viz release from Q Hayashida. Having read through the entirety of Joe Daly's Dungeon Quest the other week, I was struck by how much its 'ambling interrelationships in an off-handed fantasy world' reminded me of this ostensibly more straight-ahead fantasy genre piece; certainly Dorohedoro inhabits a more specific publishing niche -- the 'indie'-flavored mainstream seinen magazine Ikki -- but I wonder if the North American scene is so much smaller that publishers can take on multiple comparative guises? Regardless, they'll be plenty of time to ponder these issues in the future, as vol. 17 of this ongoing series is due in Japan next month; $12.99.

The Rocketeer: Cargo of Doom #1 (of 4): Yep, all those anthology comics could only culminate in a brand-new longform storyline's worth of stuff from publisher IDW, presumably still working with estate of the late Dave Stevens, who created the character. The creative team is writer Mark Waid and artist Chris Samnee, both of Marvel's well-regarded Daredevil series; they can be expected to deliver an efficient ration of derring-do in this 'something big, getting loose' danger scenario. Preview; $3.99.

Prophet Vol. 1: Remission: How much attention has this Brandon Graham-fronted revival of the old Rob Liefeld character attracted? Enough so that the book collections are starting from #"1", marking a symbolic departure from the comics' continuation of the old Extreme Studios numbering (they began with "21"), transferring the locus of identification from the character and its studio to the new creative team. Truly a story of today's comic books. Anyway, this is a low-cost collection of issues #21-26 (read: #1-6) of the new stuff, a modular space-faring journey of humankind's dubious revival in the far future where everyone appears to be a copy of the titular adventure guy. Drawings by Simon Roy, Farel Dalrymple, Giannis Milonogiannis and Graham himself; $9.99.

The Invisibles Omnibus: I think everybody over in our still-going Flex Mentallo comments thread will want to be aware of this new Vertigo release! Unless they already know! They probably do. But if they (YOU) don't, this is a comprehensive collection of writer Grant Morrison's '90s magnum opus, 1,536 pages of scattershot confrontation and interrogation of rebellion, conspiracy, adventure and freedom with a variety of artists. Amy Poodle elaborates; $150.00

Rip Kirby Vol. 5: Speaking of Alex Raymond -- or, we were, kind of, a few entries up -- here's IDW's newest 296-page collection of his detective creation, actually picking up in 1956 subsequent to Raymond's death as John Prentice took over the strip's visual aspect; $49.99.

Starstruck: And we'll wrap up today with another IDW reissue, this one a softcover edition of Elaine Lee's & Michael Wm. Kaluta's expansive space exploration, currently in the process of manifesting itself online; if you've been waiting to look at this very fine stuff, your options are multiplying; $34.99. 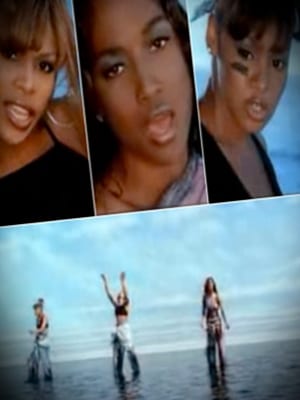 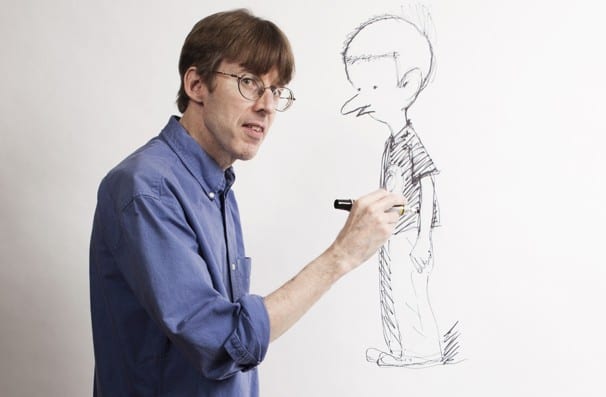