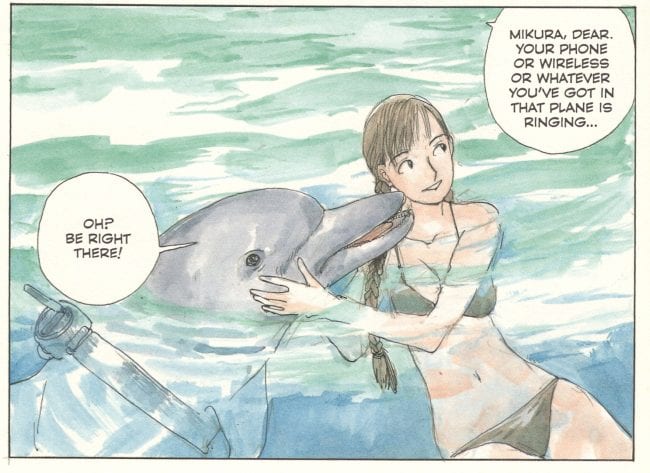 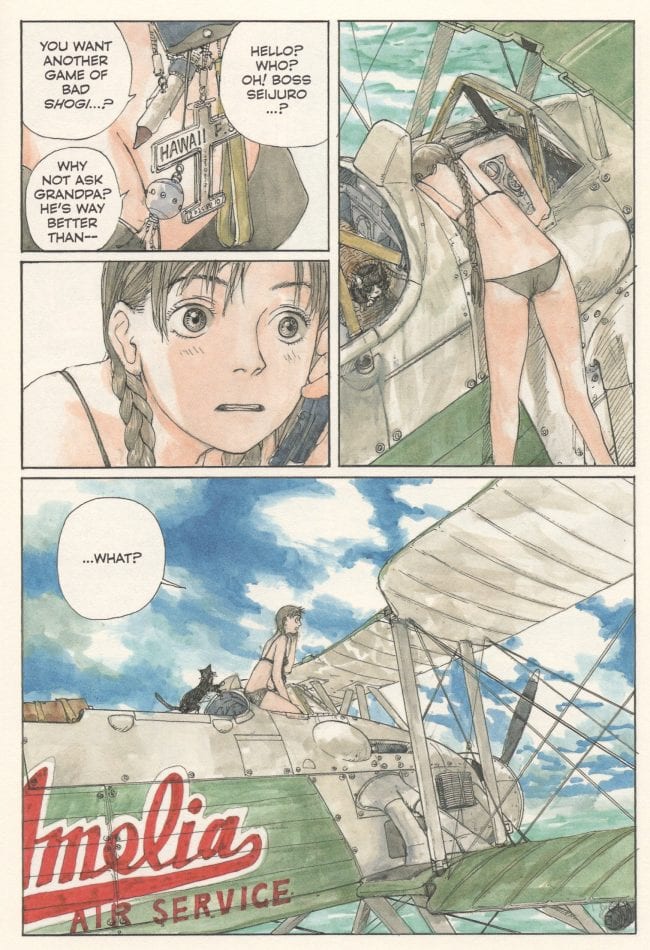 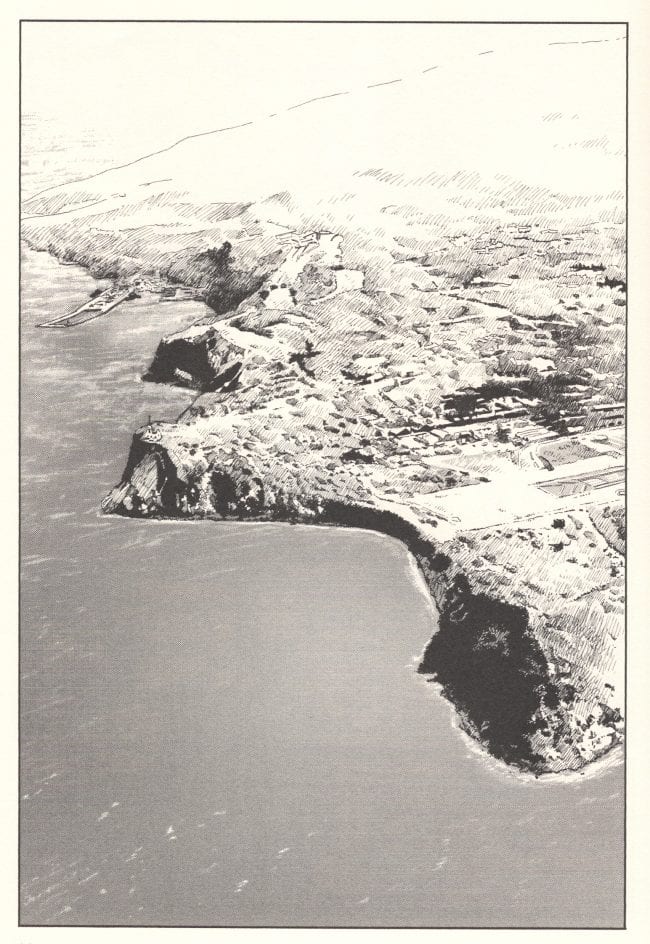 We're all familiar with the transition between the opening color pages of a manga project and the b&w remainder of the work, but few artists make use of this (quite enormous) visual shift for any substantive effect. Above we see an exception, from Dark Horse's recent release of Kenji Tsuruta's 2011 book Wandering Island. A delivery pilot active in the multitudinous islands outside of Japan's major population centers, young Mikura lives a frolicsome life in the air and sea, spontaneously leaping out of her just-docked plane in a swimsuit to swim with a research dolphin... until she gets the news that her beloved grandfather is dead, and BOOM the whole of the world is plunged into a monochrome from which we and Mikura shall not emerge.

Taken this way, it is almost fitting that Wandering Island is an unfinished series - a fact that Dark Horse has chosen to omit from its promotions, presumably because Tsuruta isn't dead or anything and might publish a second volume at some point, though after half a decade there's still nothing scheduled. Nonetheless, because this is a series about grief, it can function as a testament to the lingering of just that. Gradually, Mikura becomes obsessed with the idea that her grandfather went away to a mysterious and unusually mobile island somewhere in the ocean, the search for which consumes three years of her life. Moreover, three years before her grandfather died, another teacher of hers departed the world of the everyday in proximity of the island. On the sixth year, then, will Mikura herself be the third to vanish? Which is to say, is she merely waiting for death to take her too?

No answers are given, though the book does not feel as complete as an allegorical story should if it was indeed meant to never resolve; I have an issue of the Kodansha magazine Afternoon with some additional art in it anyway, so I am guessing Tsuruta intended for there to be more at some point. Instead, we are left with many sequences of intent study and severe melancholy, bags growing under the heroine's eyes as she neglects her work; at one point the power company shuts off her electricity, and she is left studying a massive, conspiratorial wall of theories naked from her bath in the dark. She is generally not wearing much; it's hot out, so often she wears a bikini top, if not bottoms too, or underwear, or less. Tsuruta is notable for his drawings of women as well as SF scenes or aeronautic machines, and so, combined with the devastated emotional state of his heroine, the book takes on a distinctly voyeuristic quality, by which the reader frequently observes the severe vulnerability of this woman, whether laying depressed and immobile on the ground or consulting a map while covered in bandages from an expeditionary misadventure. The translator of the book is Dana Lewis, who was associated for a long time with Studio Proteus, the localization company largely responsible for Dark Horse's reputation as a quality publisher of Japanese comics; they worked on an earlier Tsuruta series, Spirit of Wonder, way back in the 1990s, and Wandering Island, with its oceans of ink and meticulous architecture and gestural, idiosyncratic character designs, feels like a 'Studio Proteus' pickup.

But in his determination to have you curl your guts over the dismay of kind Mikura, I sense the lingering presence of moe, the aesthetic that encourages a protective attachment to young cartoon ladies, which has existed for a long time but became a powerful and explicit commercial force after Spirit of Wonder. It's not in the way Tsuruta draws, but in the attitudes expressed in what he draws and the story he's telling. In terms of marshaling the form, he is sophisticated - and I admit that even the voyeurism here is more interesting than the superheroine panty flashes on offer for North American delectation of late. That's not the stuff they teach you at manga fanservice school, man... that's the stuff you draw in hopes of admission. 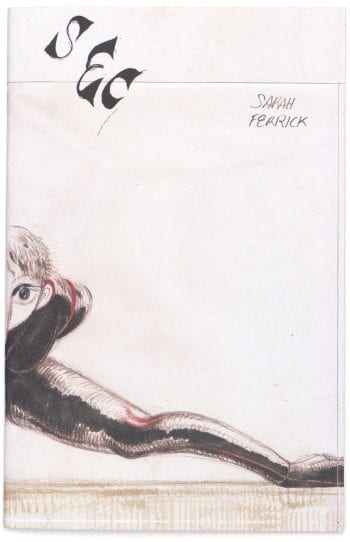 Sec: Being a 2dcloud release of new work from the artist Sarah Ferrick in the form of a 32-page comic book - the distribution to comic book stores is happening via Alternative Comics. For the record, this is one of the books funded through the Kickstarter campaign prior to the publisher's most recent crowdfunding effort, so I think backers of that should have their printed matter already. It's a love letter, by the publisher's description, in which the artist matches (often) page-filling color drawing with snatches of (often) calligraphic text, the division between words and pictures growing sometimes thin; $5.00. 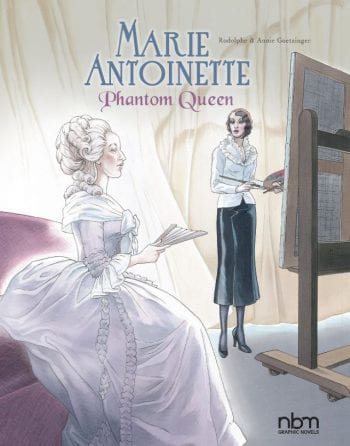 Marie Antoinette: Phantom Queen: And somewhere on the other side of comic aesthetics, we have Annie Goetzinger, respected veteran of exceedingly well-composed French comics aimed popularly at a mainline adult readership. NBM released her Girl in Dior last year, and now translates a 2011 album co-written by 'Rodolphe' (a longtime BD scenarist), on the topic of a 1930s artist haunted by the hungry ghost of the famed monarch. Basically a window into a full-blown counter-mainstream, polished for your perusal. The hardcover is 8.5" x 11", with 68 color pages. Preview; $18.99.

Hellbound Lifestyle: New generation gag cartooning from Retrofit/Big Planet, collecting 72 pages of Alabaster Pizzo comics adapting smartphone Notes from comedy writer Kaeleigh Forsyth (whom I believe is or was a contributor to the Reductress website) into four-panel sequences. Super-heavy colors on these japes; $10.00.

Dylan Dog: Mater Morbi (&) Slate: The Last American Superhero: Two here from Epicenter Comics, specialists in releases from Italy and other non-French/Spanish European areas. The creation of Tiziano Sclavi, Dylan Dog has been around since 1986, previously seeing a fat collection from Dark Horse about seven years ago. Mater Morbi is a 112-page story from 2009 (or thereabouts) re: the titular occult investigator dealing with a mystery illness, notable for art by Massimo Carnevale, whose done many covers for North American comic books. The writer is Roberto Recchioni, a Dylan Dog regular. I don't know very much about Slate, though it appears to come from Balkans-area creators Davor Radoja & Nenad Cviticanin, concerning a journalist's investigation into superhuman stuff. It's 64 pages; $11.99 (Dylan), $10.99 (Slate).

All-Star Batman #1 (&) Deathstroke: Rebirth #1: Whoa, simmer down, no no - All-Star Batman is not a revival of the Frank Miller/Jim Lee opus from many goddamn years ago, it's a totally new thing trading in a bit on name visibility from the popular Bat-writer Scott Snyder, who will be collaborating with high-profile artists for stories concerning franchise villains. For the debut he is joined by penciller John Romita, Jr. and inker Danny Miki, concerning Two-Face. Deathstroke: Rebirth is a mainline DC series, notable for scripting by Christopher Priest, a widely-admired writer of superhero comics since the 1990s, whose work in the genre has become less frequent of late. Art by Jason Paz & Carl Pagulayan; $4.99 (Batman), $2.99 (Deathstroke).

Providence #10 (of 12): Nearing the end of this Alan Moore/Jacen Burrows-headed Lovecraftian historio-metafiction series from Avatar, and let me state one thing clearly - the dialogue given to Lovecraft (a character in the book) as an exceedingly self-cultivated eccentric, addressing people orally in a pastiche of the real author's plummy personal correspondence, is some of the funniest shit Moore has written in ages, maybe since the Stan Lee parody bits of 1963. I don't think the laughs will continue for too long, though, as hapless protagonist Robert Black proceeds toward a probably-awful fate; $4.99.

Judge Dredd: The Complete Case Files Vol. 12: Continuing the Simon & Schuster line of 2000 AD chronological reprints, a long ways behind the UK editions from Rebellion but targeted specifically at North America. These 336 pages are miscellaneous stories from the late '80s, right after the writing team of John Wagner and Alan Grant split off into individual works; $25.00.

The Comics of Hergé: When the Lines Are Not So Clear: Your book-on-comics-cum-amusing-title of the week is a University Press of Mississippi release of an anthology edited by one Joe Sutliff Sanders, discussing aesthetic techniques and the artistic context of his era, among other topics. Andrei Molotiu, of Fantagraphics' 2009 Abstract Comics: An Anthology is among the contributors, a list of which can be viewed in full at the preceding link; $60.00.

Study Group Magazine #4: And finally, a CONFLICT OF INTEREST SPECIAL, as this 100-page Study Group release (distro via Alternative) contains writing by meeeeee - the theme of the issue is 'adventure', with a focus on gaming, so I decided to write a whole weird thing that smashes up my reading of a Golgo 13 comic as a child on Easter Sunday with my younger brother's creation of a card game (instructions included!) to embody my death by drug overdose in college within a fictive history of his own life for the purposes of securing a job in math, all of which ties in to medieval philosophy of gaming as an allegory for humanity's quest to control fate. Needless to say, it all makes perfect sense and will offer eons of laughter and tears. Other contributors to this characteristic blend of comics and text include Farel Dalrymple, Dylan Horrocks, Noah Van Sciver, David Brothers, Tucker Stone and many more; $15.95. 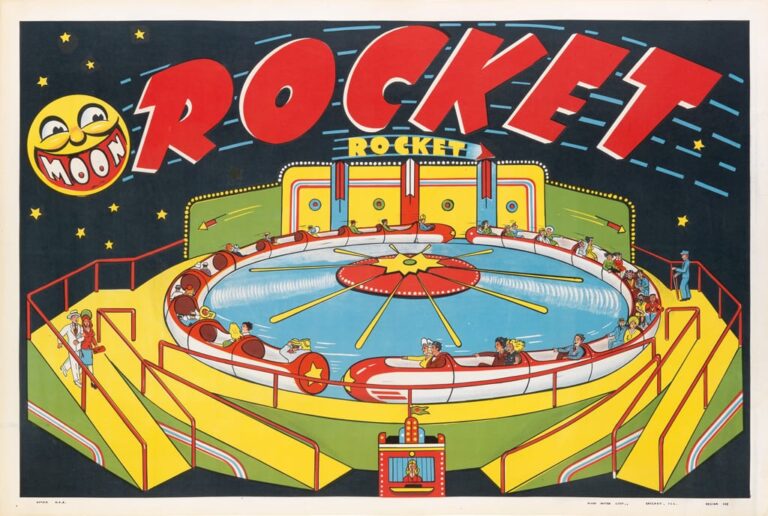