Well, it's the day after Independence Day here in the U.S., and while I'm absolutely wiped out from my demanding patriotic regimen of swilling wine at the horse track while fireworks go off, I will nonetheless remind you that the week's new comics are likely to appear on Wednesday, despite the holiday. You might want to check with your store ahead of time, but 'normal' service appears to be the general intent.

Meanwhile, I will now risk the Statue of Liberty's tears by posting an image captured from a BFI Region 2 dvd imported out of sheer impatience with Criterion or someone releasing the stuff stateside: 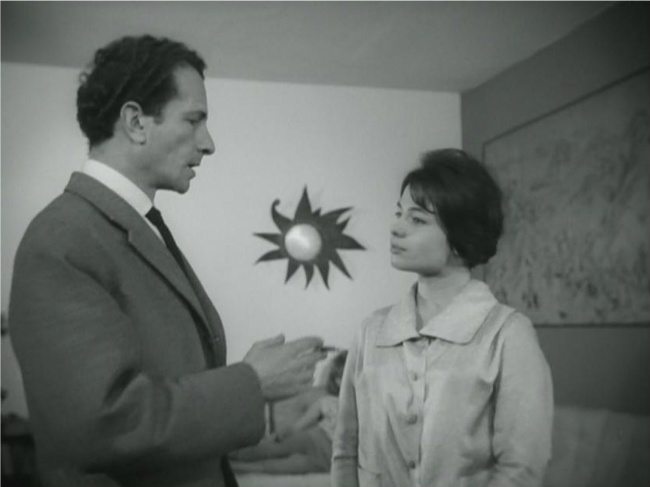 This is from the 1961 Jacques Rivette film Paris Belongs to Us (Paris nous appartient), begun in '58 as one of the first feature-length film projects headed by a contributor to Cahiers du cinéma, although it didn't see release until after the success of The 400 Blows and Breathless. Despite its excellent, almost jaunty title -- prepping you right up for some buoyant, revolutionary Nouvelle Vague stylings -- Rivette's film is actually rather sick with creepy frustration, a bit proto-Lynchian with its pure-hearted young protagonist playing detective against an ugly, violent, and frankly obscure conspiracy-or-is-it(?) that rapidly emerges as the gnawing Fear Itself behind the life 'n times.

Naturally, when I think creepy frustration, I think of the supporting and villainous characters of Steve Ditko, so imagine my delight at seeing character actor Jean-Marie Robain sporting what is very clearly the notorious Norman/Harry Osborn wave haircut from The Amazing Spider-Man - his monied, elite character invokes capitalism as a conjoined decadence and conservatism, denouncing a dead artist's radical music while his grinning teenage "ward" slithers barefoot around the room. It's the best scene in the movie, and while Ditko certainly wouldn't gel with the politics, and likely didn't have a look at some New York screening -- though he'd have had time -- it's interesting to see such a consummately individual signifier appear years before as decoration in a not entirely dissimilar context. 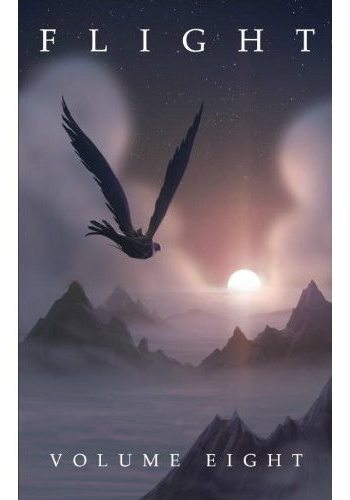 Flight Vol. 8: Most of the comics that caught my eye this week -- and believe me, with new issues of both the Fear Itself and Flashpoint superhero crossovers, sales will be made without my benediction -- fall into the categories of "looks nice, don't know much about it" and "reprints." Concerning the former, I'm a bit startled to realize exactly how little I know about this final edition of the popular Kazu Kibuishi-edited comics anthology; its official site hasn't even been updated since October of 2010. Make no mistake, back in '04 the first Flight (then an Image release) made a big splash with its glossy, animation & illustration-inspired visuals and simple, ultra-light stories, though I admit it's not been quite to my taste. Maybe the moment has simply passed, as Kibuishi suggested last year ("The original book was created to serve a need. That need was to get our core group published, to have our work be seen, and to get enough practice under our belts to be able to do books of our own."), and further works in the vein are more likely than ever to just appear online. Still, 288 more Random House-published color pages await the interested, with further installments of the related, kid-targeted Explorer anthology planned. List of contributors; $27.00. 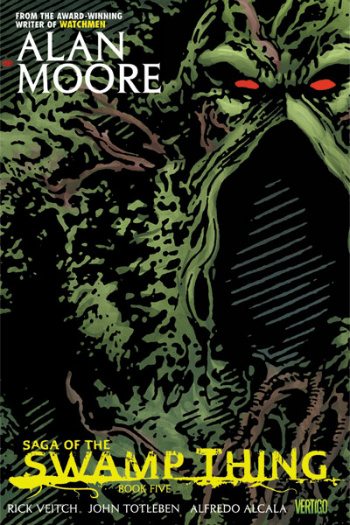 Saga of the Swamp Thing Vol. 5: And from the other end comes the penultimate volume of DC's hardcover reissue of writer Alan Moore's influential tenure on the shambling vegetation showcase, both an inquiry into comic book and wider popular horror and fantasy tropes, and a seared-brain hangover from a long '70s and its disillusioned counterculture. By this late in the run (issues #51-56), penciller Rick Veitch and inker Alfredo Alcala were firmly installed as the regular art team, with John Totleben -- soon to take up full art duties on Moore's Miracleman -- popping in to draw a well-remembered Batman guest appearance (#53); $24.99.

Rodd Racer: Being the first of several comics this week that I don't know anything about but look nice in online sample form - an 80-page b&w/color Image release of a 2010 self-published work by artist Toby Cypress, concerning a future racer blowing through a deadly city event. Preview; $7.99.

Vic Boone #1: And from publisher 215 Ink comes a continuation of one of DC's Zuda webcomic projects, although I'm interested in the pulsing colors of French-born artist Geoffo, illustrating a sci-fi PI scenario from writer Shawn Aldridge, under a cover by the great David Lloyd. Samples; $2.99.

Vengeance #1 (of 6): Speaking of pulse, artist Nick Dragotta and colorist Brad Simpson look to having fun with some pages of this latest Marvel project from writer Joe Casey, an expansive state-of-superhero-villainy thing that looks to continue some of the themes from his 2009 Dark Reign: Zodiac project with Nathan Fox (a gadfly type of superhero crossover tie-in that mostly served to critique the style of antagonist popular with Marvel at that moment) while roping together prior works at the publisher, dating back to his notorious run on Uncanny X-Men simultaneous to Grant Morrison's line-driving millennial New X-Men. Preview; $3.99.

Shame Vol. 1 (of 3): Conception: From my extensive 'out of nowhere' file comes a new project by veteran comics painter John Bolton, a 64-page horror production from Canada's Renegade Arts Entertainment: "When the purest woman on earth allows herself one selfish thought it is enough to conceive the most evil woman the world has ever known." Written by Lovern Kindzierski; $9.99.

The Secret History #15: It is my sworn duty to report on all known Igor Kordey activities, and so here's the latest English-language Archaia release of this extensive Jean-Pierre Pecau-written immortals-fucking-around-in-famous-times project; $5.95.

Magic Knight Rayearth Omnibus Edition: Being a 656-page all-in-one Dark Horse edition of a very prominent millennial Tokyopop license, one of the series that fed into the eventual manga boom of the '00s and helped seal the fan-favorite status of four-person art collective CLAMP. It's a 1993-95 "magical girl" series -- the group's Big Three manga publishing breakthrough on the home front, immediately followed by a sequel project presumably forthcoming in another omnibus -- seeing a trio of students falling into another world as legendary magic knights on a mission to free a captured princess, although things aren't quite as straightforward as expected. With color pages and all the modern publication trimmings; $19.99.

Showcase Presents: Doc Savage: Muck monsters aside, DC also has a considerably less-expected reprint project out this week, via the magic of licensing - a 448-page complete collection of one of Marvel's entries in the '70s b&w magazine sweepstakes, an eight-issue run for ye olde pulp hero, written by the very prolific-on-the-scene Doug Moench and pencilled by John Buscema, Tony DeZuniga, Marie Severin and Val Mayerik. Given the Showcase Presents branding, I presume the contents will be reduced to trade paperback 'phonebook' size; $19.99.

Garth Ennis' The Complete Battlefields Vol. 2: And while not a DC release, be aware that these finished-for-now historical battlefield comics from Dynamite are essentially the continuations of writer Ennis' War Story line of books from Vertigo, expanded into longer narratives with recurring protagonists. This is the hardcover second half of the sum total, with art by P.J. Holden, Carlos Ezquerra and Russ Braun (who's back to drawing Ennis' The Boys starting with this week's issue #56); $29.99.

Jack Magic: The Life And Art Of Jack Kirby Vol. 1 (of 2): Finally, your book-on-comics for the week - a look at Kirby by Greg Theakson, released by his own Pure Imagination Publishing; $25.00.

CONFLICT OF INTEREST RESERVOIR: A new English-language hardcover release kicks off for artist Shimura Takako's 11-books-and-counting chronicle of a boy that wants to be a girl and a girl that wants to be a boy with Wandering Son Vol. 1; $19.99. Also: a new edition of an early works collection for Megan Kelso with Queen of the Black Black; $19.99. 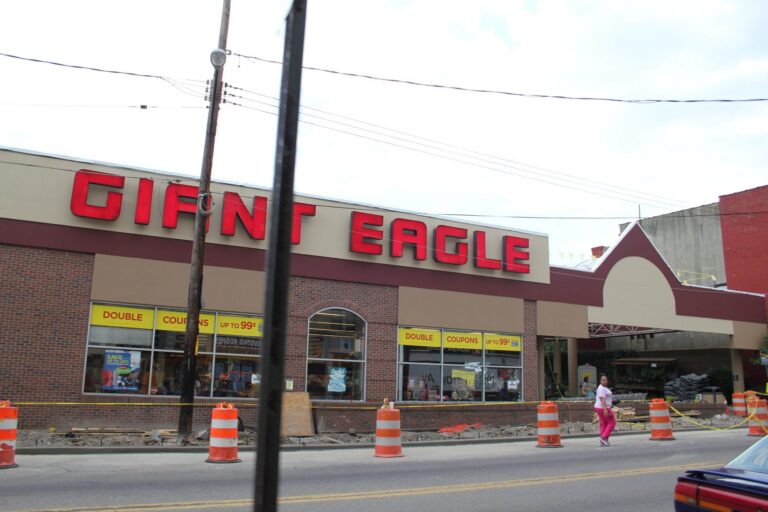 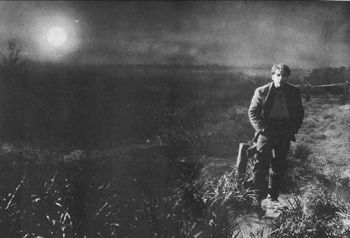