If you've been following the publishing news out of the now-concluded San Diego Comic-Con International 2011, you might have heard that DC/Vertigo is planning to release another (and apparently final) installment of writer Max Allan Collins' Road to Perdition series: Return to Perdition, illustrated by frequent Collins collaborator Terry Beaty. I couldn't help but notice how this new project neatly ties neatly into a movie-known property, while several other Vertigo series -- most recently the Jason Aaron-written crime comic Scalped -- are nearing the end of their publication, with little indication as to what DC plans to publish in the future that can't somehow be folded into a work-for-hire superhero franchising opportunity or a preexisting multimedia brand.

It's funny to remember that the original Road to Perdition had its origins in DC's old Paradox Press line, a successor to the yet-older Piranha Press line initiated in hopes of attracting 'alternative' talents with the promise of creator ownership. Moreover, the initial book was a distinctly international-minded affair, held out by its writer as a mayhem-kissed tribute to the classic Kazuo Koike/Goseki Kojima manga Lone Wolf and Cub, certainly a quality dialed down in the eventual Sam Mendes film. And if you go a little further back in Paradox history, the influence (and mayhem) seems even stronger. 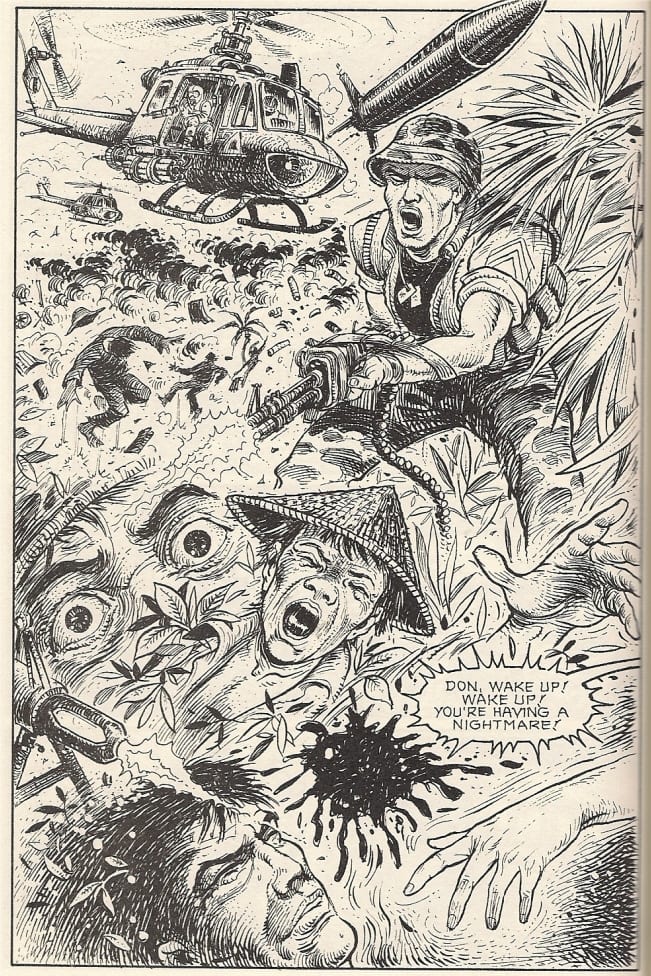 This is from the very first of Paradox's crime comics, La Pacifica, released in 1994 and 1995 as a series of three small paperback books. The artist is Anatolia-born Tayyar Ozkan, a veteran of Heavy Metal and World War 3 Illustrated, along with a number of erotic comics. La Pacifica remains his biggest longform work available in the North American mainstream, however, written by novelist Joel Rose and filmmaker Amos Poe. Ozkan's art has always been the attraction for me, specializing in big moments of violent impact and teeming pages filled with dozens of characters, often with little or no dialogue to get in the way. 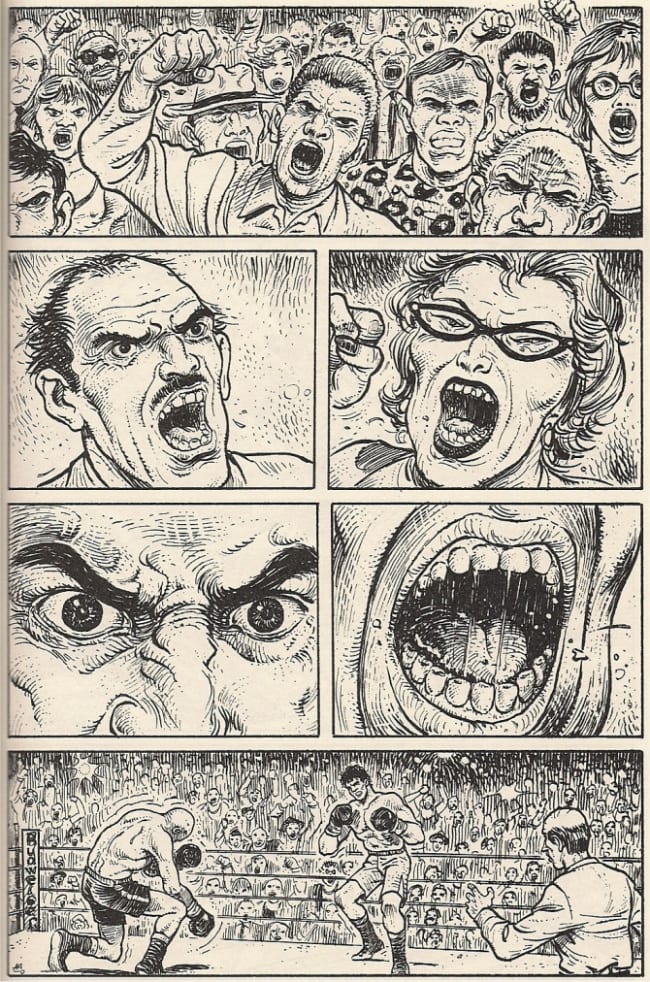 There's something about the art that reminds me of seinen manga, like a Western-minded Jiro Taniguchi look to the characters' stolid faces, made scratchier and wrinkled a bit like Francisco Solano López. It's compelling, fitting in b&w and perfect for setting Paradox's line of crime comics apart, despite the action-oriented nature of the scripts keeping them from straying too far from a fighting-bred aesthetic. It's not the kind of thing you associate with Vertigo anymore, to the extent it and DC remain separable at all. 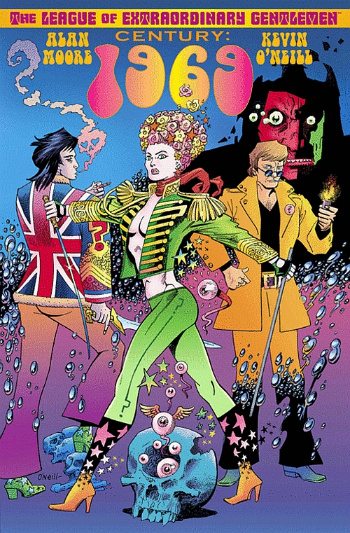 The League of Extraordinary Gentlemen: Century #2 (of 3): 1969: In which Top Shelf and Knockabout bring another 80-page semi-self-contained episode of the Alan Moore/Kevin O'Neill saga of appropriated and approximated characters from fiction navigating a cultural terrain divined from their very mashing together. Divining the plot from various interviews the writer has given, I presume this one's about the death of Brian Jones, the psychedelia-tinged resurgence of turn-of-the-century occultism (see: issue #1's 1910), an acid trip Moore took in Hyde Park as a teenager, the failure of the '60s counterculture to effect lasting sociopolitical change, the perils of longevity, and more stuff on the moon from that text serial in the back. With fully authorized Michael Moorcock and Iain Sinclair character appearances, and enough unauthorized chicken fat tucked away in O'Neill's pages you'll wish it was printed as big as the French comics albums it's on the schedule of. Preview; $9.95. 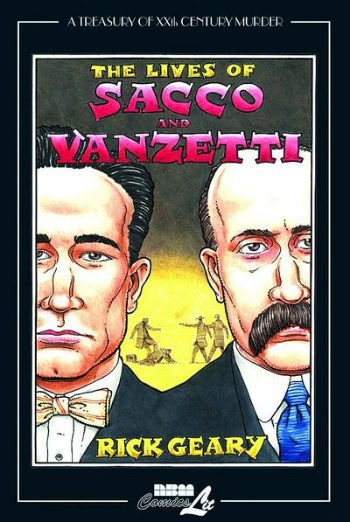 A Treasury of XXth Century Murder Vol. 4: The Lives of Sacco and Vanzetti: Elsewhere, Rick Geary -- whose own account of the Jack the Ripper murders was once solicited as a compact, just-the-facts alternative to Moore's and Eddie Campbell's From Hell -- brings the latest in his historical reportage line of books with NBM. Always worth a look, these. Preview; $15.99.

Defiance: New from First Second, this is the second in a series of three YA-tuned books from writer Carla Jablonski and artist Leland Purvis (the first being 2010's Resistance) focusing on the participation of children in warding off Nazi forces in occupied France. Preview; $16.99.

Seeds: An 80-page Com.x publication, in which artist Ross Mackintosh relates his experiences with a father dying from cancer. The Journal's Nathan Wilson called it "[d]eeply thoughtful and profoundly heartfelt" a few months back, and the art looks attractive; $10.99.

Amazing 3D Comics!: Another hardcover Craig Yoe production for IDW, this time necessitating the inclusion of special glasses. Comics by Jack Kirby, Steve Ditko (kinda hoping for his early '90s stuff in 3-D Substance here, 'cause boy can I not find those issues), Alex Toth, Bob Powell, Russ Heath, Al Jaffee and others. It's 176 pages, with an introduction by Joe Kubert; $39.99.

Alex Raymond's Rip Kirby Vol. 4 (of 4): Another Library of American Comics production for IDW, 280 pages rounding out Raymond's tenure on the detective strip he created, with the John Prentice-drawn concluding material necessitated to wrap up the story left by Raymond's untimely death in 1956; $49.99.

glamourpuss #20: Meanwhile, Dave Sim continues to investigate the events of September 6, 1956, in the midst of much panel-tracing and photo-reference; $3.00.

The Bombyce Network: Being the 144-page latest in Humanoids' line of all-in-one English releases for completed French comics series, this time a 1999-2010 suspense project from Cristophe "Cécil" Coronas -- working with veteran writer Éric Corbeyran for all but the final episode -- set in a fantastical early 20th century of Art Nouveau and snuff movies. Preview; $19.95.

Metal Hurlant Collection Vol. 2 (of 2): Also from Humanoids, rounding out their compilation of stuff from the short-lived revival of the famed comics magazine, published in English from 2002 to 2004. There's a really nice Guy Davis piece in here, created in extended homage to Jacques Tardi. The rest is hit-and-miss, though Richard Corben and David Lloyd both make appearances over 208 pages. Samples; $29.95.

Alan Moore: Storyteller: Your book-on-comics for the week #1, containing the bonus reemergence in North American comic book stores of Gary Spencer Millidge, who published the slow-burning, unfinished suspense comic Strangehaven from 1995 to 2005. Pertinently, he also put together a short comics biography of Alan Moore for the 2003 publication of Alan Moore: Portrait of an Extraordinary Gentleman, a 50th birthday tribute book which Millidge co-edited. Now comes a 320-page hardcover survey of Moore's career, which Millidge has put together with his subject's participation - archival materials are to be expected, as well as a CD sampling audio works from throughout Moore's career (though I don't believe any of the songs from the never-released The League of Extraordinary Gentlemen: Black Dossier audio component are included, just to bring it full circle here). From Rizzoli; $45.00.

Supergods: What Masked Vigilantes, Miraculous Mutants, and a Sun God from Smallville Can Teach Us About Being Human: Your book-on-comics for the week #2, which... I mean, clearly it's something of a cliché at this point to compare Alan Moore and Grant Morrison, but sometimes life just seems to will it, eh? This is Morrison's own prose work, however, a 464-page reflection on superheroes as he sees 'em, folded into something halfway between breezy autobiography and an infomercial by Grant Morrison for Grant Morrison. I've read it, and I'll have a proper review up soon-ish, but know that it rather interestingly reads a lot like some of Morrison's actual, recent superhero comics, blending moments of insight with ideas that permeate more than develop, galloping along at a clip that registers as both zippy and awkward, and positing no small amount of superhero triumphalism, which raises some troubling issues when plucked out of superhero continuity itself and applied to a real, market-driven popular culture. From Random House; $28.00.

Comics on Trial Vol. 1: And finally, your book-on-comics (or perhaps book-from-comics) for the week #3, a 184-page compilation of testimony given at public hearings before the United States Senate Subcommittee on Juvenile Delinquency in April and June of 1954. Walt Kelly, Milton Caniff, William Gaines and Frederic Wertham are averred to appear. From Pure Imagination; $25.00. 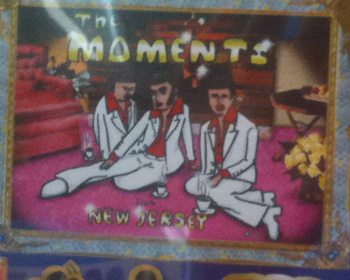 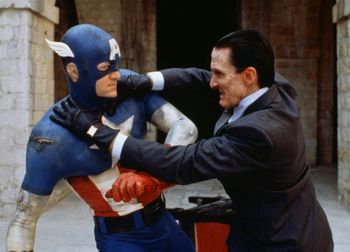