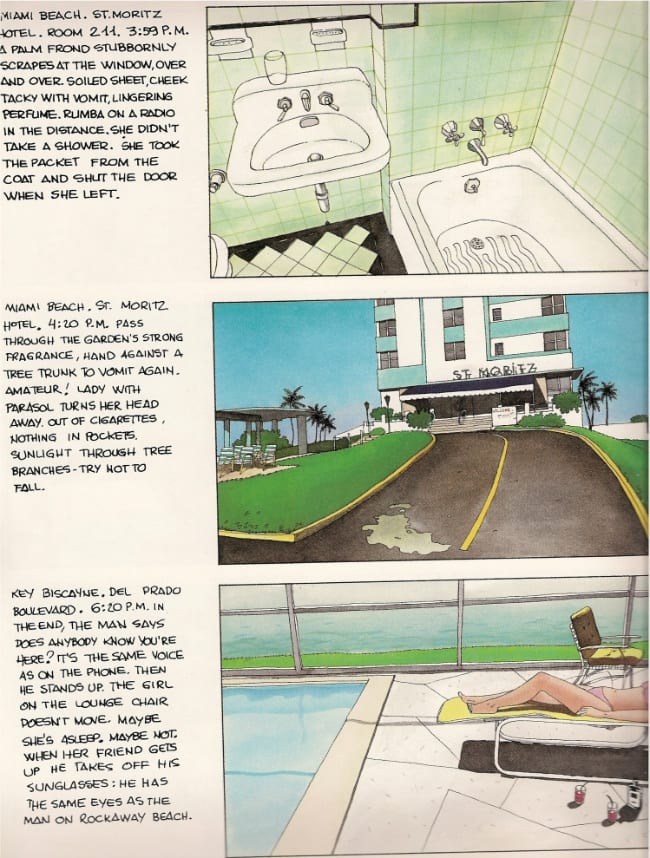 I'm traveling at the moment -- no exciting comics finds in the field, save for the dawning realization that random volumes from the middle of manga series are now a used bookstore staple -- so it seems appropriate to post some work from frequent collaborators Jacques de Loustal and Philippe Paringaux, who enjoyed a series of English-translated album releases years ago; everything up here is from New York/Miami, a collection of short stories from Catalan. Extensive use is made therein of separated text and pictures, as you can readily see, lending Loustal's rectangular images a postcard-like quality. This isn't just a matter of visual composition, however; there's a dispassion to the artist's contributions that allows Paringaux's curt, noirish text to color them. Activity is not depicted; rather, the frozen nature of comics panels creates ambiguity as to what is, in fact, occurring, while narrating characters steadfastly allow for only partial disclosure, privy to sights obscured by Loustal's pretty surfaces. It's like seeing a place, and having it described to you, but not really understanding - a tourist's POV, even in terms of human relationships.

Paringaux, a music journalist and editor, seems to enjoy such disconnection. The available collections of his work -- always with Loustal, as we see it -- are filled with one-sided homoerotic longing and misread signs; one story in New York/Miami gazes neutrally at a young girl hanging out in the mostly dull environments surrounding (as opposed to in front of) a rock show, as her running commentary vacillates between an imagined, life-changing hookup with a superstar and worries and despair over her futile, irresponsible behavior. Even the simplest, most sensational stories are distended in word-picture mix: as a vacationing (temporary, consuming, non-understanding, fitting, perfect) man picks up a pretty mystery woman for a sexy drive in his fine car, Loustal mostly studies their faces, broad and heartbreakingly desperate and revealing on the man's end, and barely mobile and mysterious for the femme fatale. An omniscient narrator sparsely informs on the woman's delight in driving, and then hitting animals with the car, and of course that can't signal much care for human life either, but the man can only sense a very taboo thrill. In the end, he can't say much about her, and, by careful design, neither can we. 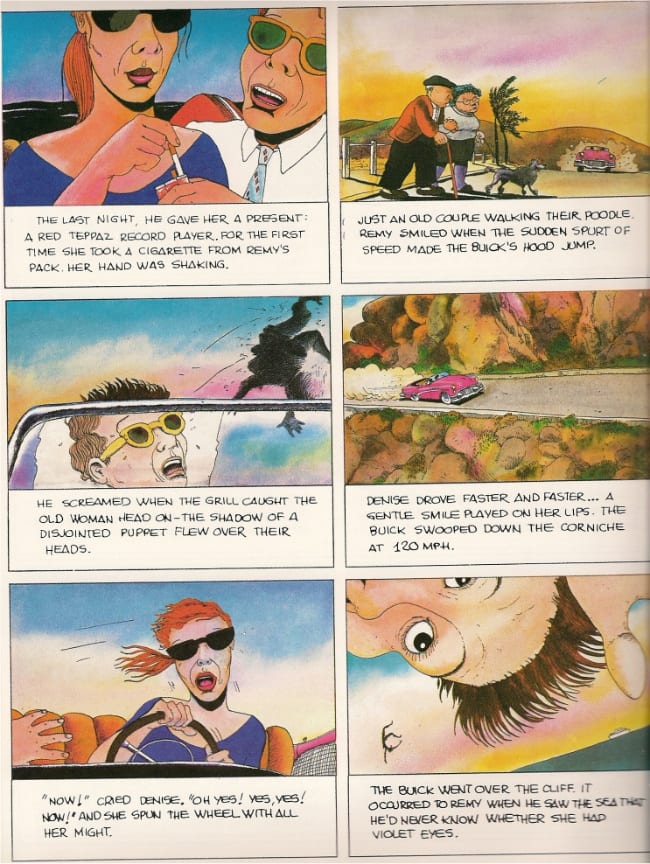 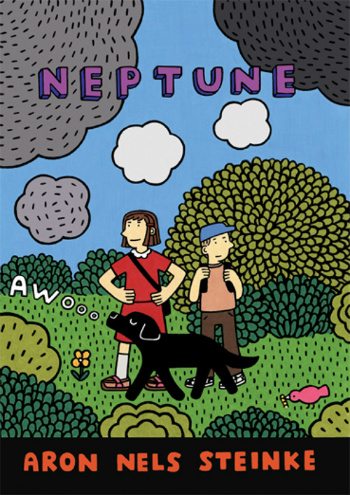 Neptune: Two straightforward 'looks neat, little else known' picks this week ('neat' being an unexpectedly pliable concept, it turns out), with art samples provided via links for your delectation. First, there's a cutely-drawn 160-page debut book from artist Aron Nels Steinke and publisher Sparkplug, about a pair of kids and their possible fantastic dog. Preview; $14.00. 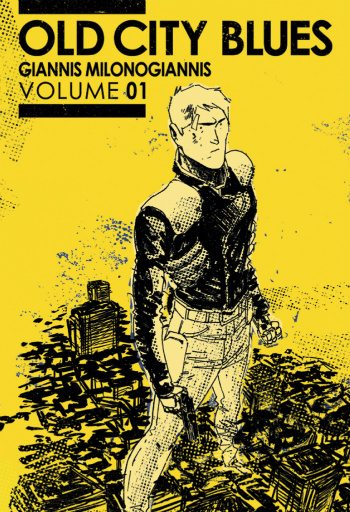 Old City Blues Vol. 1: Then, from artist Giannis Milonogiannis comes an Archaia collection of a future tech webcomic, drawn in a very interesting blend of zip-dotted spare-line cartooning and circa '80s manga detailing in artificial surfaces and machines. Homepage here; $14.95.

Sergio Aragonés Funnies #1: So, I didn't pick "Bongo" in the who's-going-to-launch-a-new-old-timey-one-man-comics-anthology-series in the office sweepstakes, yet here's a new monthly showcase for Aragonés' inimitable style, promising autobiographical anecdotes, gags, puzzles and more; $3.50.

La Quinta Camera: Having gone through a good bit (but not all) of artist Natsume Ono's back catalog -- including the vigorously admired House of Five Leaves -- publisher Viz reaches all the way back to the young artist's 2003 longform debut, a 208-page piece (initially a webcomic) concerning a new tenant's arrival in the lives of the population of an Italian apartment; $12.99.

Ōoku: The Inner Chambers Vol. 6: Meanwhile, your continuing series choice is the latest from Fumi Yoshinaga's epic of a gender-reversed feudal Japan. Note that vol. 7 just came out in Japan last month, so you might have a while to wait for more; $12.99.

Bleedout: I'm not 100% sure on this, because technology puzzles me -- I actually only got the wireless in my room working about an hour ago, most of these entries are total fiction -- but I believe this 104-page Archaia hardcover collects art related to a 12-episode expansion (Bleedout) to the online game CrimeCraft. Notable for its list of participating artists (explorable at the preceding link), including Nathan Fox, Glenn Fabry, Tim Bradstreet, Howard Chaykin, Gary Erskine, Ben Templesmith, Trevor Hairsine and others; $14.95.

The Boys: Butcher, Baker, Candlestickmaker #1 (of 6): This is the start of one of those stretches -- the last, actually -- where writer Garth Ennis' world building extravaganza/superpower agony drama effectively goes biweekly, now with the particularly non-optional slant of revealing the background of major character Billy Butcher, while seeing co-creator Darick Robertson return to interior art contributions. Preview; $3.99.

DC Retroactive: Wonder Woman - The '70s: In what can't help but seem like an accessory to its upcoming, endlessly discussed line-wide continuity reboot plan, DC kicks off its Retroactive line - a three-comics-at-a-time run of 56-page packages composed of 1/2 vintage reprints and 1/2 new work from writers (and sometimes artists) associated with particular characters in particular decades, set to continue weekly through the end of Flashpoint. This looks to be the most potentially appealing of the initial batch, with Dennis O'Neil teaming with slick cartoon stylist J. Bone for a tale from the Diana Prince white costume era. I am unaware of what the reprint is, but Dennis O'Neil is again the writer; $4.99.

DC Comics Presents: The Metal Men: On the other hand, this reprint package -- primarily concerned with a Keith Giffen/J.M. DeMatteis/Kevin Maguire Metal Men backup feature from the initial issues of the most recent incarnation of Doom Patrol -- most certainly contains some Bob Haney material, albeit a latter day piece from one of DC's prior new-looks-at-old-stuff, the 2000 Silver Age project (specifically Silver Age: Brave and the Bold, also drawn by Maguire); $7.99.

Rocketeer Adventures #3 (of 4): Finally, completing the 'looks neat' circle - by now I'm expecting the scenarios in this Dave Stevens tribute anthology to be light enough to float without the benefit of movie serial rocket power, but the participating artists continue to provide an interesting mix of throwback-styled cartooning and heavier realism. This issue's participants are Ryan Sook, Tommy Lee Edwards and Bruce Timm, with stories by Joe R. Lansdale and Jonathan Ross (who also sees an oversized, Steranko-pinned-up hardcover collected edition of his Turf series with Edwards this week from Image); $3.99. 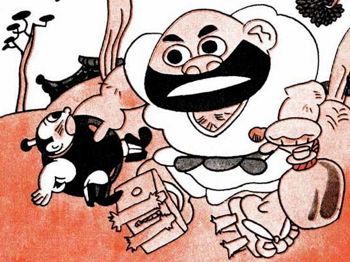 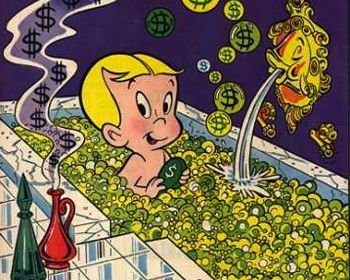