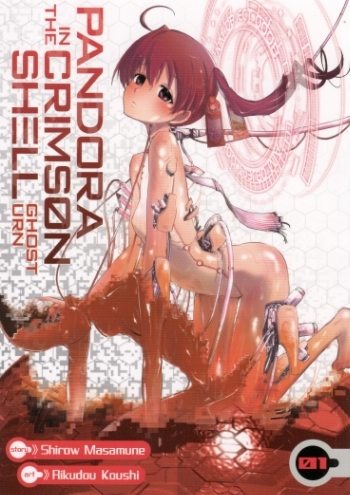 Wow, another Comic-Con has come and gone! I had a lot of fun this year, insofar as I was vacationing elsewhere, but I am nonetheless cognizant of my duties to summarize all the latest and greatest news updates. For example, did you know that Frank Miller is now drawing part of The Dark Knight III: The Master Race? I mean, who knows what that actually involves, but now my interest is very slightly higher than it would be for a sequel project Miller is otherwise only co-writing with Brian Azzarello.

See? There's plenty of stuff at Comic-Con that doesn't involve movies. Looking over the panels, I notice there was a Best & Worst Manga presentation, which definitely gave me a laugh for the presence of Pandora In The Crimson Shell: Ghost Urn, a comic that was only actually released to the Direct Market last Wednesday yet has already won a place among the "Worst Manga for Anyone, Any Age." It is also, for our sins, the return to comics of Masamune Shirow, an artist held in perhaps as much esteem by a slightly younger generation as Frank Miller was a few years before. Shirow's return, however, hasn't really attract much of any attention in general global comic book circles - maybe everyone has sort of presumed the comic isn't going to be very good, or wrote it off entirely when they heard Shirow wasn't actually drawing it, but that's never stopped Frank Miller, right?

Now, make no mistake: Ghost Urn is a *terrible* comic. In the abstract, it's sort of like the later volumes of Shirow's Appleseed, in that some early scene-setting bits give way to what's basically a really long action scene with breaks for exposition, but all it really does is underline how integral Shirow's obsessive attention to detail is to the value of his comics. I don't just mean this visually, in terms of how heavy and adorned Shirow's environments are, but also in the way his plots are so laborious in laying out political motivations and barely-comprehensible off-page machinations; to read Shirow's comics is to become very quickly (and, with luck, happily) lost in the Shirow world. My favorite of his works remains 1995's Dominion: Conflict, which forestalls the action long enough that the work as a whole feels more like a hang-out comic, where the reader is invited to linger on Shirow's innumerable fancies and whims. 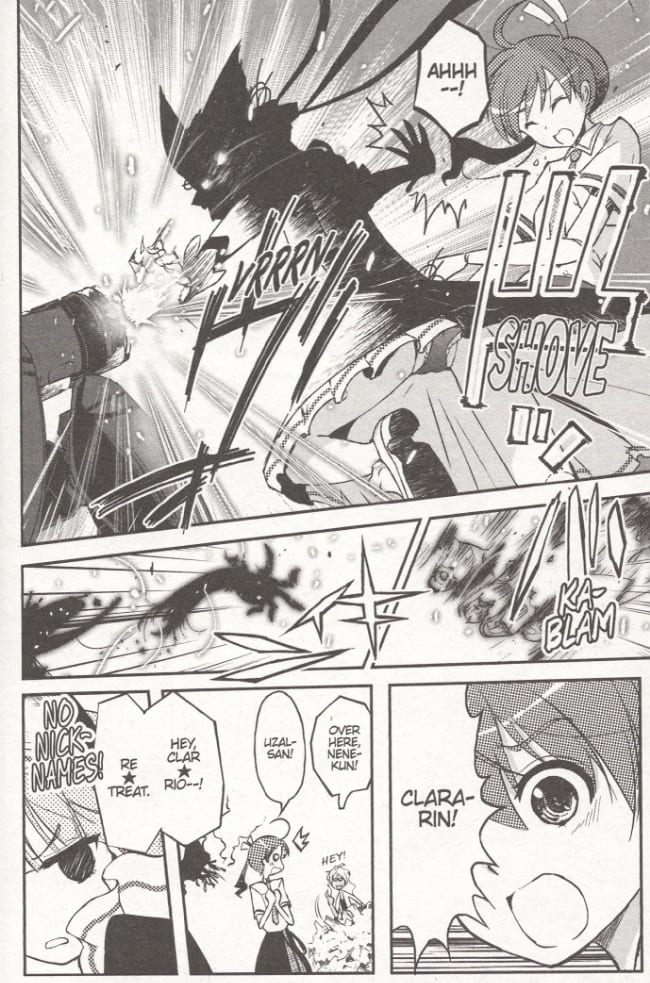 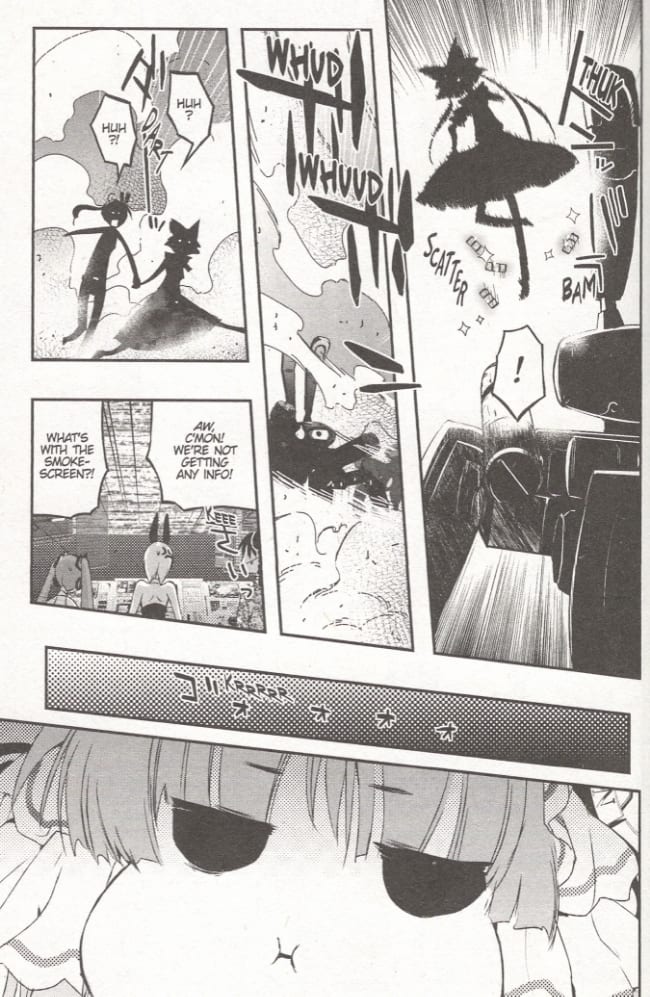 I'm a charitable enough reader that I can almost always eventually figure out what's going on in a comic, and Ghost Urn is no different, but I also feel a superior action comic can access the reader's emotions; excite them. This comic, in contrast, feels very aloof, because it employs all manner of (presumably) time-saving shortcuts that simply indicate information. I don't really *feel* anything from that second panel of tone-y robot dismemberment, which appears to be some sort of 180 degree pivot from panel 1, although we never actually see any reaction from the maimed combatant, nor do we get a sense of how her body is responding to the force. Usually I'm kind of annoyed by sound fx translations sitting on the same page as the Japanese originals, but they are necessary here to even sort out that the shadow figures at the top of page two are even moving, so isolated they are in seas of helpful background-obscuring smoke. And I have no idea why the bottom third of page two -- representing a mid-page scene transition, as denoted by the very particular manga trait of a double-wide gutter -- is teasing some sort of segue from crackling screen to crackling screen when the POV for the final panel is that of a character who isn't looking through a screen, nor apparently has been having any problems with her vision, although... how can I even really tell?

In an afterword, Shirow confesses that he did not draw the comic itself because his art looks "old", his pacing is slow and he has a difficult time making things "cheerful and fun." Ghost Urn was actually supposed to be an anime series -- frankly, it plays out more like an anime desperate to become a video game -- so it's also likely that Shirow's general style wouldn't be considered something appealing to the (mostly) devoted anime nerds reading Newtype Ace, where the serial originated. There's a lot of really hackneyed otaku bait sprinkled throughout: maid costumes; schoolgirls; a would-be idol; bunny ears. That's before you hit the central hook, in which the naive schoolgirl cyborg heroine frequently updates her firmware by plugging her finger into another robot girl's vagina - it plays out like an oft-repeated magical girl transformation scene, but with a bluntly sexual, utterly pandering connotation that, moreover, is on loan from an earlier robot vagina access concept by CLAMP, the superstar all-woman art collective behind Chobits, a (let's say) 'mature audiences' series for men back in 2000.

But Ghost Urn, like Chobits, and Dark Knight III, is also something of a collective effort.

Here are the formal credits; Shirow, in collaboration with "Crossroad", is credited with only the original story. In his afterword -- which, depending on one's cynicism, can read like a vigorous effort at distancing himself from the final product -- Shirow notes that this only really involved a rough story flow and pacing, with the rest left to Rikudō Kōshi, artist of the popular comedy manga Excel Saga. Yet Kōshi is mainly credited with "production", which suggests a supervisory role; he's only the third-credited artist, behind Masahito Watari (himself an established artist of manga adaptations for illustrated novels) and Rin Hitotose, who are also availing themselves of two further assistants. Not that this level of delegation is necessarily unique in commercial manga, but I'm not even sure what exactly the cover-credited Kōshi is doing here save for acting as an intermediary between the rest of the art crew and the editor; probably he's drawing something, but maybe he feels the majority of his time is better spent on some other, more personal project, i.e. something the rights to which he doesn't have to share.

And the results of such tumult is obvious... a splendid success running to six volumes and counting! Ah hell, lots of people are gonna buy that new Batman comic too... 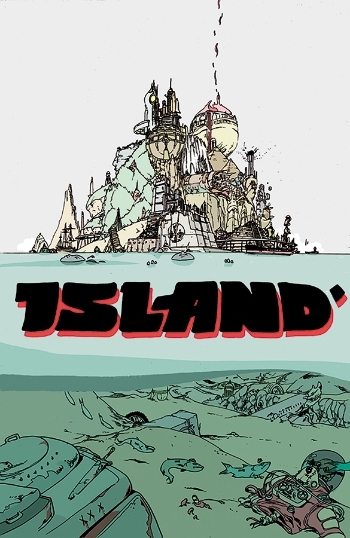 Island #1: Image produces a lot of first issues these days, but this one has some added potential - it's a 100+ page magazine dedicated to serials and short works, prominently featuring contributions by Brandon Graham, Emma Ríos and Marian Churchland, all of them connected to the 8House series of linked fantasy comics. There's also a prose contribution by Kelly Sue DeConnick (recently profiled in Vanity Fair) and the comics debut of illustrator Ludroe. Future issues should arrive monthly, with contributors including Farel Dalrymple and Michael DeForge, and features such as a revised iteration of the Fil Barlow comic Zooniverse, which Eclipse published in North America back in the mid-'80s. Details & samples; $7.99. 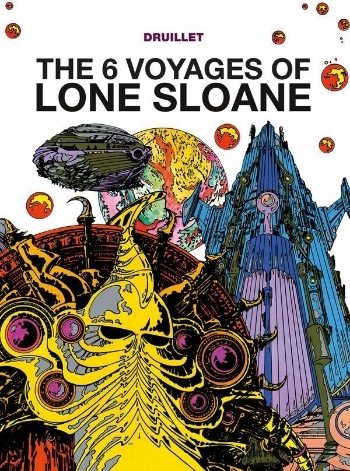 Lone Sloane Vol. 1: The 6 Voyages of Lone Sloane: Connected to all of this, I suppose, is the announcement that Grant Morrison will be taking over as editor in chief of Heavy Metal magazine. I took this as a signal that the magazine is probably cashing out entirely from the bande dessinée scene, which perhaps will spark some new movement in terms of albums' direct localization (or, as with Delcourt, a big digital translation strategy). But until we know for sure, we can at least voyage off into history with this Titan Comics edition of Philippe Druillet's maddeningly detailed 1972 story suite, among the loudest harbingers of shifting expectations on the French popular comics scene. Druillet, of course, would later co-found Les Humanoïdes Associés, and contribute prominently to Métal Hurlant, but unlike the similarly-positioned Moebius his work seems very much keyed to this particular era (though it of course endured after), a maximal design aesthetic less eternal than quintessential. I hope much more of it returns to print after this 9.6" x 12.9", 72-page hardcover, which is already set to be followed in translation by 1973's Delirius later this year; $17.99.

Poetry is Useless: Being a new deluxe sketchbook release for artist Anders Nilsen, covering a period from 2007 through roughly the present, and incorporating many types of off-the-cuff narrative formats, from captioned life drawings to word-ballooned portraiture to multi-paneled comics. The simple comparison is to Drawn and Quarterly's old ACME Novelty Datebook releases with Chris Ware, and indeed it's D&Q behind this 7" x 8", 224-page hardcover. Samples; $29.95.

The Divine: Probably the highest-profile of all the comics I'm listing this week, The Divine marks what I believe is the first longform comics collaboration between the very popular sibling illustrators Asaf & Tomer Hanuka (who, 15 years ago, collaborated on the Alternative Comics anthology series Bipolar, albeit mainly on their own discreet serials). It's a mystic contemporary war comic involving military contractors and child soldiers in southeast Asia, written by Boaz Lavie, an Israeli filmmaker and video game designer. First Second I'm sure will ably get this 160-page, 4.06" x 8.44" softcover into North American stores, following up on a January release in French via Dargaud. Preview; $19.99.

Godzilla in Hell #1 (of 5): As if flattening all those cities would carry no metaphysical tax! Yes, it seems Gojira has finally gone downtown, and though reasons why will be gradually revealed, this IDW miniseries really looks to be more of an anthology project with a through-line plot, since every issue will be handled by different creators. First up is James Stokoe, creator of Orc Stain and writer/artist of 2012-13's Godzilla: The Half Century War, who has stated that his issue will demonstrate an "all monster, no human viewpoint", likened to Masashi Tanaka's wordless dinosaur manga Gon. Preview; $3.99.

An Entity Observes All Things: A rather extensive (152-page) Retrofit/Big Planet collection of SF comics by the very prolific Box Brown, also of First Second's recent Andre the Giant biography; $12.00.

Dörfler: I can't say I'm all that familiar with Jeremy Baum, though he has been profiled by Rob Clough on this website; the Pittsburgh-based artist is apparently a "furious" self-publisher of comics and drawings, and his prolific variations on essentially the same woman (and repeating environments/visual phenomena) put me slightly in the mind of Daisuke Ichiba, if considerably more fantasy-toned and waaay heavier on filling up space with color information and environmental setting. Anyway, Fantagraphics is now publishing his latest longform comic, a 96-page, 7.5" x 12" hardcover concerning totalitarian systems and revenge and landscapes and stuff; $22.99.

The Incredible Herb Trimpe: Finally, your book-on-comics of the week - a 160-page TwoMorrows hardcover from writers Dewey Cassell & Aaron Sultan, drawn from conversations with the late Marvel mainstay, with additional comments from peers, collaborators and family members; $34.95. 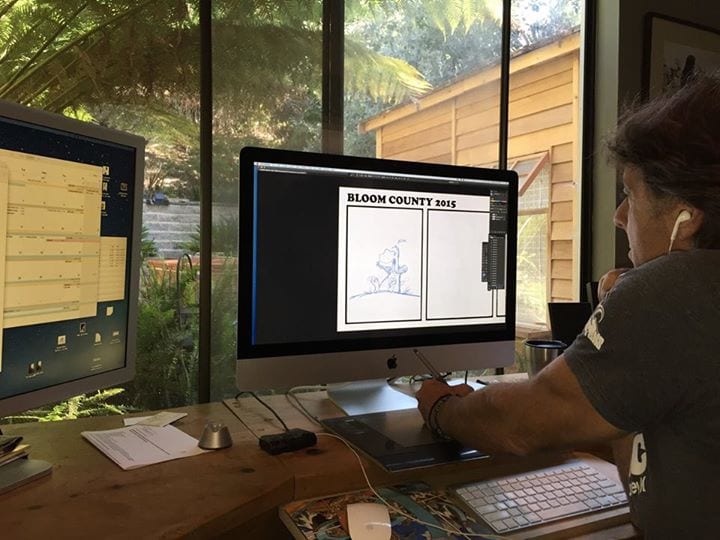 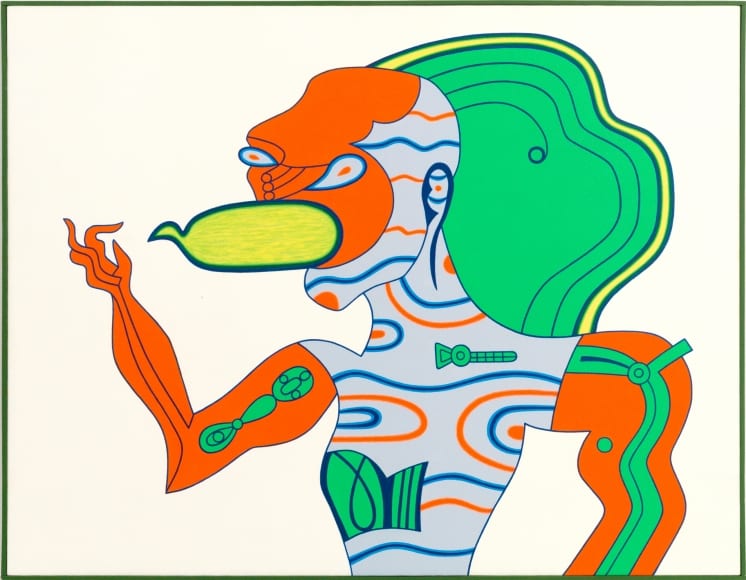