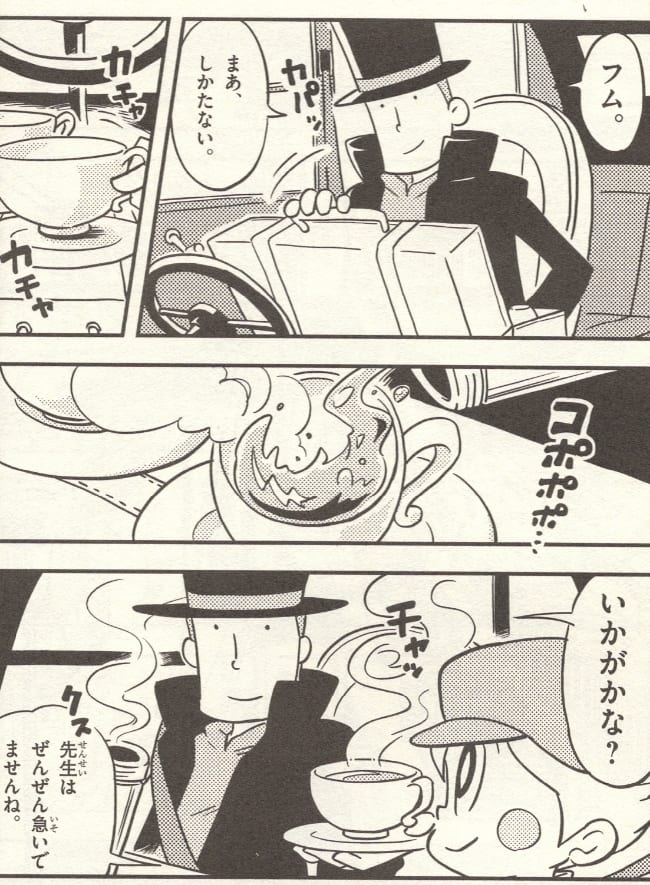 If you're like me -- and, as always, allow me to express my deepest condolences in advance -- your social media feed has probably been dominated with updates from the Electronic Entertainment Expo, which is an event where all the big video game people offer previews of upcoming works and then everybody talks about those previews online; anyone with experience riding the annual hype swirl around Comic-Con International already has a good idea of what it's about from the perspective of a common enthusiast, or even just an acquaintance of enthusiasts. I'm not much of a gamer myself, but I did get a New Nintendo 3DS the other month - it's a handheld video game system you can sort of treat like a pet, in that it records how much you walk with it and responds to anyone you encounter with a similar system in their bag or pocket, and obviously it also plays several hundred video game cartridges, many of them originating in Japan and benefiting from all sorts of cross-platform tie-ins.

Above, for example, you see the most recent collected comic for the Professor Layton series of puzzle games, in which a top-hatted archeologist and his adolescent weed carrier solve extremely unlikely and sentimental mysteries by aiding dozens of nearby townsfolk with puzzles: mathematical word problems; riddles; mazes; chess games; sliding block conundrums; etc. The series is effectively in retirement for now, but in the three years following its 2007 debut it managed to rack up four complete games, three manga series, a line of novels, a theatrical animated movie and countless toys, phone straps, doodads and whatsits. It was a true flash success, powered in part by the games' generous usage of fully animated scenes reminiscent of the works of Studio Ghibli (with which the same studio, Level-5, would later formally collaborate on a different game, Ni no Kuni). This isn't to say that the characters look very much like Hayao Miyazaki's art or anything -- and, it's not like he's the only artist ever active at Ghibli -- but the game does adopt a fantasy European setting, unstuck from time, and that does beg some comparison.

So imagine my surprise at finding Professor Layton and the Little Mystery (2013), a Nana Seino comic that extends the notional international influence into the comics realm. There's something rather Dupuy-Berbérian about the Professor in this one, even as he interacts with his now-furiously chibi boy assistant Luke. France has done much exploring in the realm of manga influence (see the recently-translated Last Man), so it's nice to see the door swings both ways, although I wonder if we're also not seeing a symptom of marketing. This comic was released under the brand of Coro Coro Comic, Shōgakukan's long-lived manga magazine for (roughly) 8 to 12-year old boys. Coro Coro is somewhat distinct from mainline shōnen manga -- ostensibly children's comics aimed at males, but actually read far more widely -- in that it skews a little younger, leans more heavily on humor, and makes vivid use of media licenses, particularly gaming licenses. Japanese comics have a way of putting things in boxes; if you specialize in gag manga, or sports manga, or mahjong manga, those are the projects editors are going to approve, and those are the professional connections you are going to build. Coro Coro was built in the '70s as a vessel to hold Fujiko Fujio's Doraemon, which will doubtlessly endure, but more often today the artists participating in this magazine's comics don't break as wide or general as someone working in less specialized shōnen or shōjo manga. And under this limitation, perhaps, an artist like Seino can explore a slightly more international flavor, under the guise of officiating a global kids' comics aesthetic. Professor Layton is not a bad venue for that, although clearly it's not a limitless platform. Level-5's big hit right now is Yo-Kai Watch, a monster collection game, and nothing is planned for the good Professor beyond a branded card game for mobile phones and tablets. I don't know if this or any related comic is still running. 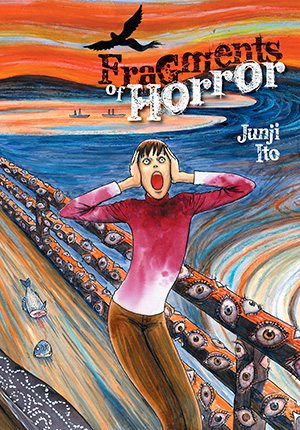 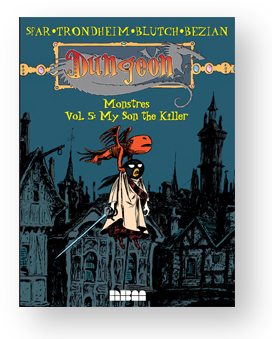 Dungeon Monstres Vol. 5: My Son the Killer: But if it's REAL FRENCH COMICS you want, Dungeon is always there. "Wait, didn't Dungeon end?" Yes, but NBM didn't get around to all of the corollary albums, and I don't think there's gonna be too much argument when half this book is drawn by Blutch, one of the revered masters of world comics. Walter Pezzali is the colorist, and Lewis Trondheim & Joann Sfar are the writers. As usual, two albums are included in this 96-page, 6.5" x 9" softcover edition, with the second half drawn by Frédéric Bézian. Samples; $14.99.

The Summit of the Gods Vol. 5 (of 5): Junji Itō isn't the only one whose comics have had a long wait for translation. It's hard work getting these books out, especially if you're as small an outfit as Fanfare/Ponent Mon. Nonetheless, they are dedicated to promoting the works of Jirō Taniguchi, he of the heavy cartoon realism. It was 2009, I think, when the publisher began releasing this millennial mountain climbing collaboration between Taniguchi and writer Baku Yumemakura, and finally here we see the 304-page conclusion; $25.00.

Child of the Storm (&) Redhand: Twilight of the Gods: But getting back to Eurocomics, here are two releases from Humanoids. Child of the Storm is a 2003-13 fantasy series about an orphan who can harness the force of the weather, and the many travails he suffers. The writer is Manuel Bichebois and the artists are Didier Poli (also of the Elric series Titan Comics is releasing) and Giulio Zeloni. Redhand was a 2004-06 series about a powerful fighting man from Kurt Busiek and Mario Alberti, American and Italian creators known in English for high-end superhero work, but very recently a third album appeared with the participation of writer Sam Timel and artist Bazal - Humanoids' edition will collect everything; $34.95 (each).

Master Keaton Vol. 3: BUT GETTING BACK TO MANGA, here is VIZ again with another 320 pages of exploits starring the world's most competent guy every drawn by Naoki Urasawa, with scenarios by Hokusei Katsushika and Takashi Nagasaki; $19.99.

Clover Honey (&) Me Likes You Very Much: Two here from Alternative Comics (sort of). Clover Honey is actually a 20th anniversary edition -- "heavily revised, redrawn, and expanded" -- of early crime comics work by Rich Tommaso, now 136 pages. Me Likes You Very Much is specifically Alternative's distribution of a Hic and Hoc release of humorous daily webcomics by Lauren Barnett, filling out 192 pages; $14.95 (Clover), $14.00 (Me Likes).

Library of American Comics Essentials: Tarzan 1929: Few formats are more fun than this IDW line of 11.5" x 4.25" landscape hardcovers, presenting one vintage daily newspaper strip per page. The strips in question this time are the first dailies every produced from the Edgar Rice Burroughs jungle character, with art by Hal Foster and Rex Maxon. Expect 344 pages; $29.99.

The Complete Eightball 1-18: And finally - well, there's a lot of Fantagraphics reprints out this week. A mid-'90s volume of The Complete Peanuts. A new edition of mid-'80s Robert Crumb stuff from The Complete Crumb Comics. A collection of Graham Ingels horror comics. Aw, but let's face it - the main event here can only be a 560-page, two-volume slipcased hardcover set of eighteen issues of Dan Clowes' signature series, preserving the original issues as they appeared with multitudinous shorts, bits of serials, rants and everything. It may be that the very essence of the alternative era of comic books is right in here; $119.99. 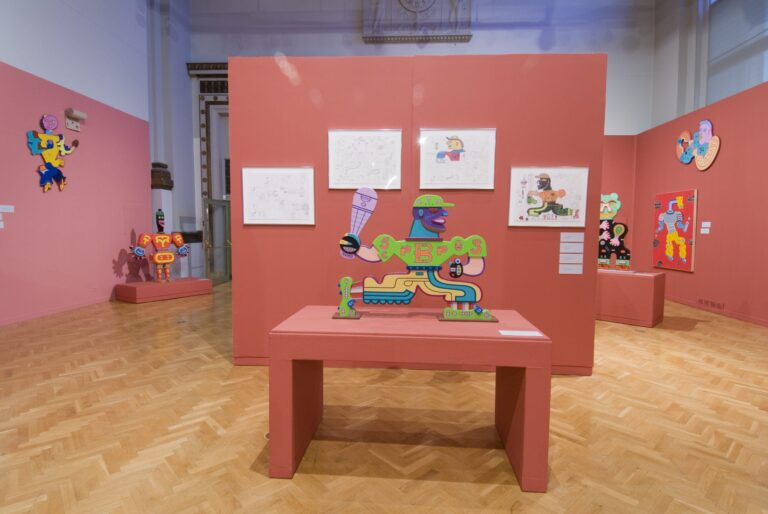 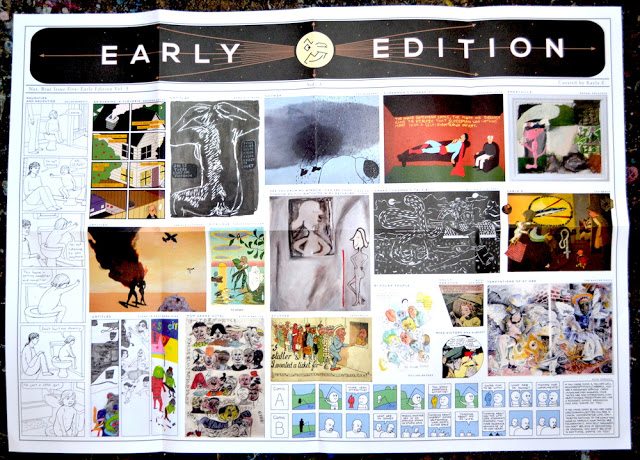