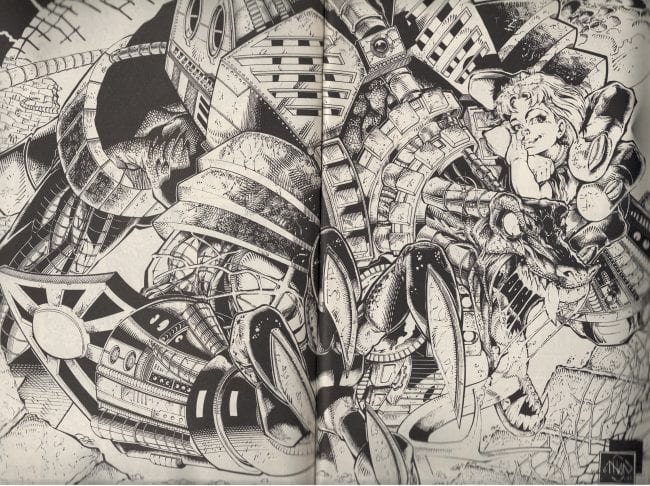 Found this cute little critter skittering around 1997's Hall of Heroes #0, the revival of an earlier house anthology for an Indiana small-press publisher of the same name. Like Aircel before it, Hall of Heroes worked with some extremely young artists - I think Trent Kaniuga, of the well-traveled series CreeD, was only 15 when he started. Similarly, the artist of the image above, Ethan Van Sciver, was 19 when he debuted his Cyberfrog comic at Hall of Heroes in '94; Van Sciver is now predominantly known for his DC superhero art, but for a few years he worked in this rather post-Image funny animal vein, taking Cyberfrog to Harris and camping there until, as indicated in a 2010 interview, he was essentially starved out the door once the Vampirella impresarios realized they weren't sitting on a new media franchise goldmine. But anyway, this is not Cyberfrog above, it is "Salamandroid", who must balance his mission of vengeance with being a dad. Quite a funny little piece -- scripted by Patricia Breen from a story by Tom Sniegoski, though the creation and concept appear to be Van Sciver's own -- with a very keen sense of how this type of extremely 1990s approach can be pushed into an absurd and comedic realm by simply broaching different subject matters. At the same time, we can see how such a skill set is readily applicable to superhero comics, wholly on-the-level.

As for Hall of Heroes, its principal, Allen Stewart, eventually re-purposed the name for a superhero museum he founded in 2007, making this perhaps the only comic book publisher to specifically *become* a museum, rather than just feeling like one... 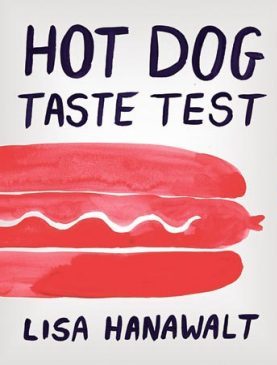 Hot Dog Taste Test: Being the new book release from Lisa Hanawalt, one of the most distinct humor stylists of the '00s small-press scene -- hers are the sort of comics you can readily identify from somewhere across the room -- who has since emerged onto a wider plain of internet and cinematographic comedy, without surrendering the grotesque and melancholic aspects of her approach. I would expect a blend of cartoons, illustrations, and illuminated essays from these 176 pages. A Drawn & Quarterly hardcover, 7" x 9"; $22.95. 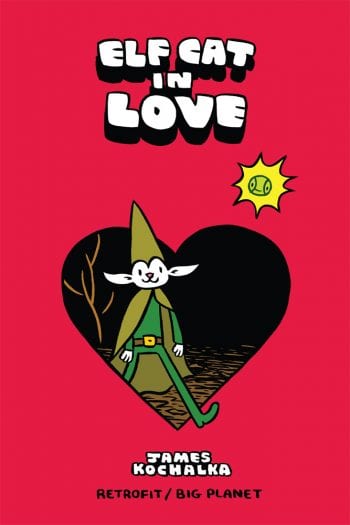 Elf Cat in Love: The publisher's website tells me that this is the first-ever hardcover book release from Retrofit/Big Planet, which has mainly concerned itself with the fading trade of alternative comic books, although projects like last year's NA release of Olivier Schrauwen's Mowgli's Mirror (a bookshelf-ready paperback in Europe) have pushed against the edges of that anyway. James Kochalka is the artist here, with 100 b&w pages of passion and conceit in a fantasy realm; $15.00.

Compass South: Four Points Vol. 1: Your YA selection of the week is a new 19th century high seas adventure series from writer Hope Larson -- veteran of many broadly-aimed comics projects -- and artist Rebecca Mock, an illustrator known for co-organizing 2014's Hana Doki Kira anthology of Japanese-influenced short comics. The story concerns a pair of twins who seek to reunite somewhere on the high seas - vol. 2 is due next year. A 224-page color hardcover from Farrar, Straus and Giroux. Samples; $17.99.

Showman Killer Vol. 2 (of 3): The Golden Child (&) Alexandro Jodorowsky's Screaming Planet: Two here from Jodorowsky, who recently completed work on his new feature film Endless Poetry, a sequel to 2013's The Dance of Reality - something tells me these small-scale autobiographical fancies don't command quite the nerd culture cachet as speculations upon the man's proximity to expensive genre blockbusters. Comics, however, march forward with SF offerings. Showman Killer is Titan's ongoing release of a 2010-12 series created with artist Nicolas Fructus; it tells of the life of a space assassin who finds his life changing... not unfamiliar territory! Screaming Planet is Humanoids' new softcover edition of shorts Jodorowsky wrote for an '00s revival of Métal Hurlant - contributing artists include Igor Baranko, Jerome Opena, J.H. Williams III and José Ladronn (who is now working on Sons of El Topo, the first volume of which was released in France last week); $15.99 (Showman), $19.95 (Planet).

Judge Dredd: Titan: Hey, it's a more-or-less simultaneous NA/UK release of the newest Judge Dredd collection. Specifically, this is the 144-page Simon & Schuster North American edition, which appears to be slightly shorter than Rebellion's 158-page UK package, going by the individual websites - nonetheless, both should include a 2014-15 sequence of stories by writer Rob Williams and artist Henry Flint, notably concerning activity on and from a space penal colony; $19.99.

Godzilla: Treasury Edition: In addition to the super-deluxe oversized releases of its Artist's Edition line, IDW is also known to put out the occasional orthodox color comics reprint at the 8.5" x 13", roughly approximating the old mega-sized comics put out by Marvel, DC, etc. in years past. This one is notable for leaning exclusively on the art of James Stokoe, who can't not benefit from as large a presentation as possible. Contains 2013's Godzilla: The Half-Century War #1 and 2015's Godzilla in Hell #1 -- both serial chapters, but relatively self-contained -- as well as "all of Stokoe’s assorted Godzilla covers over the years" across 64 pages; $9.99.

Tales from the Darkside #1 (of 4): One of the notable serial comics successes of the last few years was Locke & Key, an IDW fantasy/horror series from writer Joe Hill and artist Gabriel Rodriguez. This is their new comics project with the same publisher, a revival of the '80s George Romero-created television horror anthology series that will explore something of a connected world through its various installments. Note that Hill completed several scripts for an aborted TV revival of the property as well - those will be collected by IDW later this year, with illustrations by Charles Paul Wilson; $3.99.

Sandman Mystery Theatre Vol. 1: Kinda chuckled involuntarily at this one - nothing against the content, which is perfectly fine Suggested for Mature Readers pulp detective fare set in the 1930s, but DC has tried to collect this stuff several times in the past, and I don't believe has ever gotten the entire 1993-99 run finished. At twelve issues per volume, though, it's now got a better shot than ever before. Written by Matt Wagner, with art by Guy Davis (whose look would eventually come to define the title), John Watkiss and R.G. Taylor; $29.99.

Fritz Leiber's Fafhrd and the Gray Mouser: The Cloud of Hate and Other Stories: The title obscures it a bit, but this 136-page Dark Horse softcover appears to be a full collection of the 1973 DC series Sword of Sorcery, primarily comprised of Dennis O'Neil adaptations of Leiber's stories, penciled by the green likes of young Howard Chaykin and Walter Simonson, and inked by a wide variety of helping hands, among them Bernie Wrightson and Al Milgrom. There's some early Jim Starlin art in here too - generally a fun series, from what I can remember. Samples; $17.99.

Dark Knight: A True Batman Story (&) The Dark Knight Returns: The Last Crusade: Batman - he still makes money. Enough so, that DC is prepared to go in different directions with the character. A True Batman Story, for example, is not a superhero comic at all, but a Vertigo-released autobiographical comic scripted by Paul Dini, in which the longtime writer for superhero comics and animation relates the story of a severe beating he endured in the early 1990s, and the imagined conversations he subsequently had with various Batman characters. Eduardo Risso of 100 Bullets is the artist. The Last Crusade, meanwhile - well, you didn't think ol' DC was gonna stop with that Dark Knight Returns sequel, right? No, now we've also got a 64-page prequel on our hands, written by Brian Azzarello & Frank Miller -- I am just going to presume the writing on the page will read like Azzarello's, as it did in the one issue of DK3 I finished -- and drawn by John Romita Jr.; $22.99 (True), $6.99 (Crusade).

Neil Gaiman's How to Talk to Girls at Parties: Finally, here is a new prose-to-comics adaptation from the extremely capable team of Fábio Moon and Gabriel Bá, translating a Gaiman original from 2006 about curious boys of limited experience learning all the wrong(?) things from uniquely unworldly girls. I'd also like to take a moment to commend Dark Horse on exploring the "From a Tweet by" blurb in its solicitation copy - I hope that one day my tweets will appear on a book as well. Preview; $17.99. 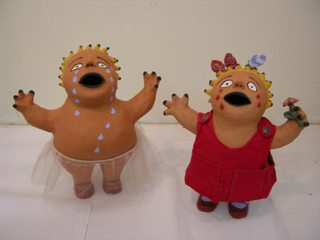 Krypto and the Dogs 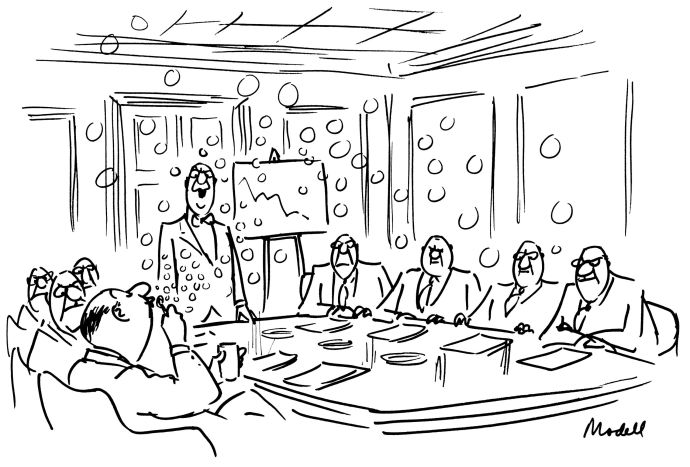