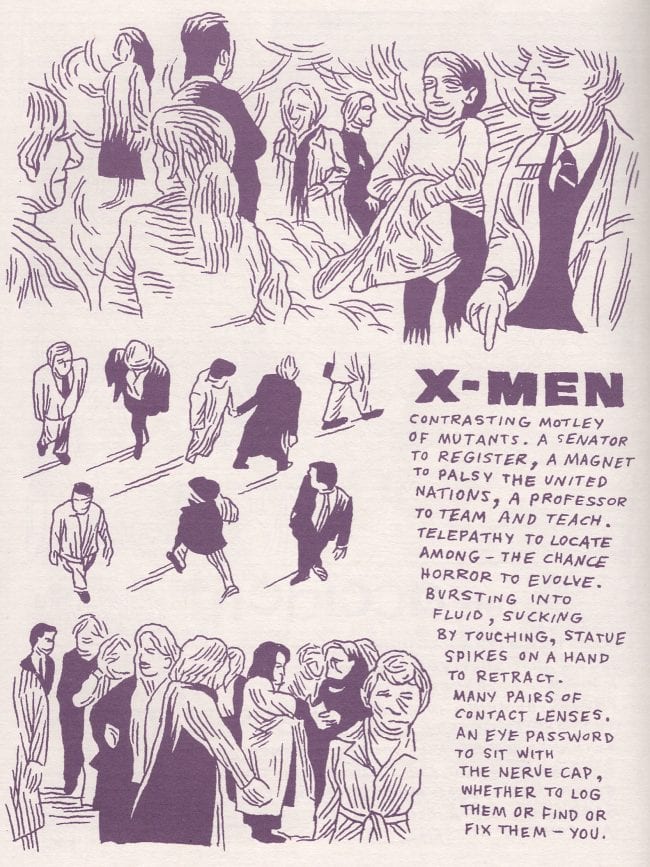 I was going to put some really timely Captain America & Bucky content up here, but I can't seem to find a video of the two guys waltzing at the end of Salò without resorting to time codes, so here is an Tim Hensley impression of the X-Men motion picture franchise, from the pages of his movie drawing zine Ticket Stub, as collected by Yam Books in 2012 - earlier work than Wally Gropius, and quite different in approach from the recent, film-filled Sir Alfred No. 3, but nonetheless filled with the artist's passion for phrasing. Bryan Singer is back now too; please look to your local movie listings, and realize that I am still extremely on top of things. 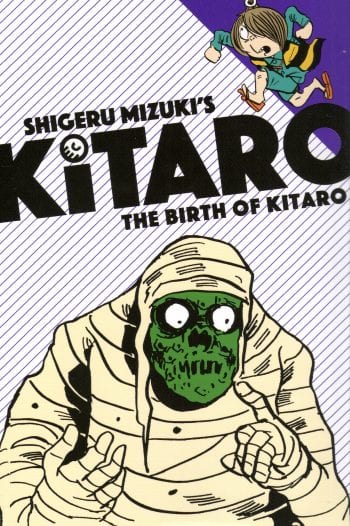 Shigeru Mizuki's Kitaro Vol. 1: The Birth of Kitaro: We begin with your manga pick of the week, a rare presentation of '60s youth comics in the popular softcover digest form. Yet publisher Drawn and Quarterly has known success before with the Mizuki oeuvre, and the yōkai-driven supernatural adventure stuff represented here remains tightly associated with his name in Japan. Note that this is a non-chronological arrangement of episodic materials from Garo and Weekly Shōnen Magazine, selected by translator Zack Davisson (who also contributes various supplementary texts) - its contents are distinct from the 400+ page Kitaro collection D&Q released in 2013; $12.95. 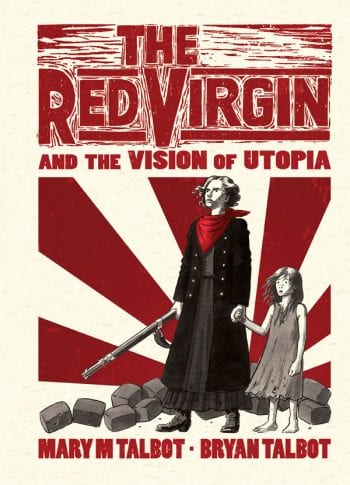 The Red Virgin and the Vision of Utopia: Being Dark Horse's North American near-simultaneous release of a book handled by Jonathan Cape in the UK - the latest from writer Mary M. Talbot and artist Bryan Talbot, the collaborators behind 2012's Dotter of Her Father's Eyes, which won a Costa Book Award for biography. I was more taken with their follow-up, 2014's Sally Heathcote, Suffragette (with artist Kate Charlesworth), an often bracing depiction of the pragmatism and pleasure of political violence, seguing into a trenchant chronicle of radical activists splitting into factions and devouring each other. These 144 pages concern Louise Michel, a Paris Commune activist deported to New Caledonia, where she embraced anarchism and supported an 1878 revolt by the indigenous Kanaks. As usual, I suspect these bookshop-ready items fly under the radar of Direct Market consumers -- the prominent positioning of Bryan Talbot in British SF/action comics history notwithstanding -- so be alert! Preview; $19.99.

Hellboy in Hell #10: As much as I laughed at this headline to a recent Mike Mignola interview, I was impressed by the artist's candor regarding the capricious structure of Hellboy in Hell; when I read issue #8 I thought "how is he even going to continue this," and it turns out Mignola had thought the same thing at the same point. But then, while the rest of the Hellboy line rumbles forward on the shared-universe tread known well to comic book stores, this series behaves still like a private island of personal obsessions, just Mignola writing and drawing under Dave Stewart's colors. And now this is the final issue, with Mignola planning to focus on strictly personal painting and drawing for the immediate future. Excellent cover; $2.99.

Andre the Giant: Closer to okay, no, that's not the plot of Yotsuba&! - actually, grandma visits! Kiyohiko Azuma's slice-of-early-childhood-life series is beloved for the sunny day clarity of its boisterous heroine's interactions with anything and everything, and I do not expect much of a departure from that very fertile subject matter at any point. Yen Press publishes; $13.00 (to repeat).

Andre the Giant: Closer to Heaven (&) James Joyce: Portrait of a Dubliner: Two biographies here; fundament for those bookstore walls. Closer to Heaven is a 104-page Lion Forge/IDW release, in which writer Brandon Easton and artist Denis Medri detail the life of the professional wrestling icon - the second such comic after Box Brown's Andre the Giant: Life and Legend (First Second, 2014). Portrait of a Dubliner is Arcade Publishing's North American edition (following a 2013 release by The O'Brien Press of Ireland) of Spanish-born artist Alfonso Zapico's 2011 biography of the literary great, 240 ink-washed pages and winner of the '12 National Comic Prize from Spain's Ministry of Culture; $12.99 (Andre), $22.99 (Joyce).

Talk Dirty to Me: No, this is not a reissue of the classic Matthias Schultheiss porn album Talk Dirty (Eros Comix, 1994), it's the second AdHouse book collecting work from the 2014-15 anthology Maple Key Comics - the first was Sophie Goldstein's well-regarded The Oven, so eyes will definitely be on artist Luke Howard, a CCS grad and 2014 Ignatz nominee for Promising New Talent. The 128-page softcover -- I think the artist's first collection with an established house, following a number of self-published works -- follows a young woman as she takes a job as a phone sex operator, apparently with little in the way of psychological reward. Preview; $14.95.

Providence #9 (of 12) (&) Cinema Purgatorio #2: A rare double-shot of Alan Moore in comic book format as June looms. Providence is now beginning its third and final act, with H.P. Lovecraft himself introduced as a denizen of the world Moore has created with artist Jacen Burrows to position many of his works in a mutual history. Also, last issue had some dialogue transposition techniques reminiscent of Chris Ware's Thrilling Adventure Stories, which I think is a first for Avatar, though admittedly I have yet to obtain issue #1/2 of 2002's 10th Muse/Demonslayer crossover. Cinema Purgatorio pairs Moore with longtime cohort Kevin O'Neill for social terror in the movie house, along with four continuing serials from assorted Avatar veterans; $4.99 (Providence), $5.99 (Purgatorio).

Master Keaton Vol. 7 (&) Goodnight Punpun Vol. 2 (&) Franken Fran Omnibus Vol. 2 (&) Neon Genesis Evangelion 2-in-1 Vol. 5: Yeah, I'm just gonna line these manga series up, 'cause there's a lot of them. Master Keaton is the episodic and tender-hearted men's adventure series Naoki Urasawa created with Hokusei Katsushika (and Takashi Nagasaki, who seems to have dropped off the covers of recent volumes). Goodnight Punpun is Inio Asano's signature work, which my friend Chris Mautner described as "sort of a normal bildungsroman, but then stuff happens that makes you go what the hell?!". Franken Fran is a lurid gore comedy that my Twitter feed talks about and is probably not going to be stocked on the shelves at Barnes and Noble, so support your local comics shop, pervert. Neon Genesis Evangelion is the concluding omnibus volume (all of which have been 3-in-1 until now, with only 2 left to collect) of Yoshiyuki Sadamoto's looooooong-running (1994-2013) adaptation of the famous robot and youth agony television cartoon, in case you prefer this sturdier format; $19.99 (everything except Punpun), $24.99 (Punpun is *always* excluded).

Judge Dredd: The Complete Case Files Vol. 27 (&) Vampirella Archives Vol. 14: Voluminous caches, brought to light. Complete Case Files covers 2000 AD and Judge Dredd Megazine stories from late 1997 and early 1998, with writer/co-creator John Wagner in firm command. A UK import from Rebellion. Dynamite's Vampirella Archives, meanwhile, must be nearing the end of its run - there were only 112 issues, and this book covers #97-103. Archie Goodwin returns briefly as writer in here, although Rich Margopoulos handles most of the other stories, with art by the familiar crew of José González, Rafael Auraleón, José Ortiz, Gonzalo Mayo and others; $26.99 (Dredd), $49.99 (Vampirella).

Tullus: The Adventures of a Christian Boy in Roman Times #1: Deep, deep cut here from Manuscript Press -- they of Comics Revue -- reprinting a weekly adventure strip that started in WWII era Sunday School periodicals. The creator was one Joseph Hughes Newton, who apparently writes these installments for artist Bob Magnusen, per Diamond's solicitation: "Tullus and his friends are captured and enslaved by the wolf clan, but Tullus, thanks to his Christian faith, earns the respect of his captors." I don't know much beyond that, but 'wolf conversion narrative' definitely flips some switch in my brain; $4.99.

Hellboy's World: Comics and Monsters on the Margins: Getting back to Hell - here, finally, is your book on comics of the week, a 280-page University of California Press theoretical work by longstanding writer on film and comics Scott Bukatman, exploring "how comics produce a heightened 'adventure of reading' in which syntheses of image and word, image sequences, and serial narratives create compelling worlds for the reader’s imagination to inhabit," and demonstrating "the pleasurable and multiple complexities of the reader’s experience, invoking the riotous colors of comics that elude rationality and control and delving into shared fictional universes and occult detection, the horror genre and the evocation of the sublime, and the place of abstraction in Mignola’s art." Journal contributor and noted comics academic Charles Hatfield called it a masterpiece of comics criticism the other day, and I don't hear that about everything; $26.95. 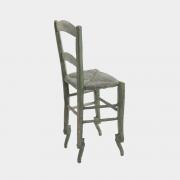 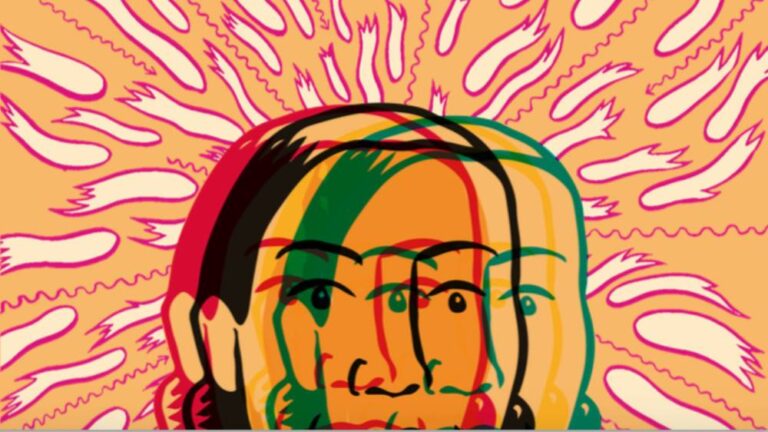