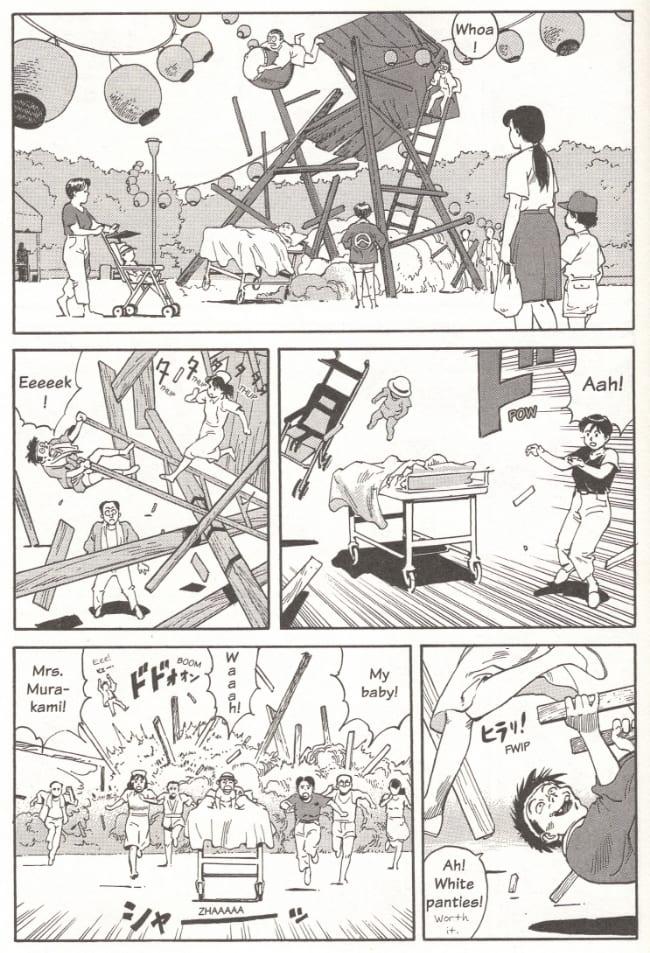 Just a little comedy up here today, from the 1988 story "Beyond the Sun", as collected in Vertical's recent Dream Fossil: The Complete Stories of Satoshi Kon. I really enjoyed Dream Fossil, which represents not only a comprehensive collection of an artist's shorter comics, but a glimpse into the desires of a young artist, eager to emulate his favorites and working out his problems on paper. Not everything in here is especially good -- at one point there are dozens of pages' worth of an unpublished contest submission, sourced apparently from photocopies on file with the hosting magazine -- but all of it communicates a distinct sense of evolution, which is a sensation not typically found in the serial-driven, very commercial world of slick mainline manga.

Kon, who died in 2010, is obviously better known as a revered anime director; in manga, he worked as a studio assistant to Katsuhiro Ōtomo, and many of his earliest animation ventures likewise occurred under the Ōtomo umbrella. Which immediately brings to mind "Beyond the Sun" - concerning the madcap flight of an ancient grandmother on her hospital bed toward her family at the beach, the story is remarkably similar in its broad contours to Roujin Z, a 1991 anime film written by Ōtomo, which marked Kon's debut in animation with the very glamorous role of background design. Ōtomo's script offers a good deal of SF decoration, as well as a considerably stronger sense of social satire, but it is still the story of a pensioner on an out-of-control bed racing toward the beach, much to the frustration of a compassionate nurse. Immediately, questions are raised: did Kon actually dream up this story, only for Ōtomo to supplement it as his own original work, taking his assistant along for the animation job that effectively launched the career for which he's remembered?

Or, did Ōtomo discuss this idea with Kon, the latter of whom elected to draw it as a straightforward comedy? "Beyond the Sun" was originally published under the banner of Young Magazine, which was still serializing Ōtomo's Akira at the time, so it doesn't seem too unlikely that collaborators would discuss and riff on one another's ideas in effectively the same forum. And certainly, Kon's 22-page story is not particularly ambitious, functioning mainly as an experiment in depicting movement. As is typical with Kon's manga, I'm not really convinced; his fidelity to the sort of clean, cartoon realism popularized by Ōtomo ("New Wave" manga, per Hisashi Eguchi, who also worked on Roujin Z as a character designer) greatly inhibits his sense of motion. If you look at panel one above, elements with which to communication movement are present (clouds of dust, etc.), but characters and debris just seem to hang frozen; this was not generally a problem with Ōtomo himself. Still, I laughed at the sheer who-gives-a-shit character of panel 3, in which Kon just pastes down his loyal nurse in mid-air, relying on proximity and sound effects to communicate her navigation of that teetering ladder - this is a lark! There's an upskirt joke in panel 4! From Satoshi Kon! To take this too seriously is probably to elide the possibility of artists who just want to fuck around a little... unaware, no doubt, that revealing volumes like this will commemorate their every gesture and scratch. 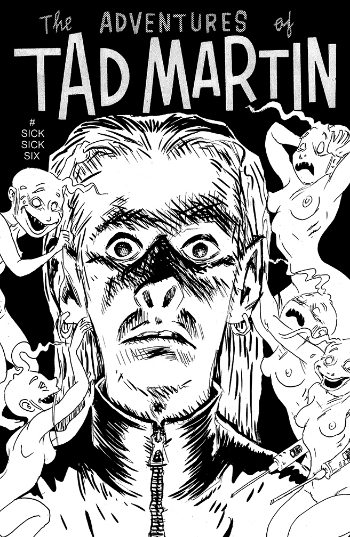 The Adventures of Tad Martin #Sick Sick Six: It's possible there is no comic more readily built for this spotlight than what we've got here, a 66-page magazine-sized release of art and stories by Al Frank, aka "Casanova Frankenstein", whom the late Dylan Williams of Sparkplug Comic Books praised fulsomely as "another totally fucking amazing punk comic artist.... Al took Pettibon[] and combined it with a different aspect of street art and came up with another, completely unique style." The Tad Martin series was previously published by Caliber's Iconografix line, along with Dave Cooper's A Big Someplace and Dame Darcy's pre-Fantagraphics Meatcake; issue #5 was released in 1993. Frank[enstein] subsequently self-published The Negronomicon (Comics drawn while I should have been working) 1996-2006, although this item arrives via Teenage Dinosaur/Profanity Hill. Review by Brian Nicholson; $6.66. 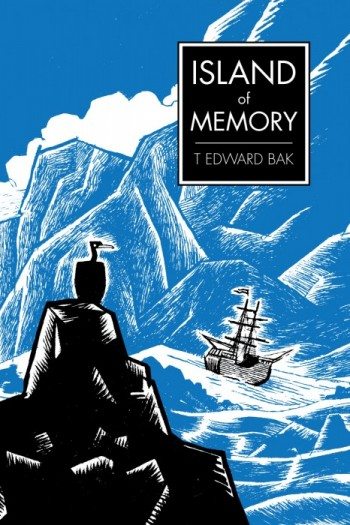 Island of Memory Vol. 1: I'm having a lot of trouble recalling if this 72-page color book has been made available via Diamond before (Alternative Comics is handling the distribution), but it's worth another mention regardless - a 72-page Floating World Books edition of comics by T. Edward Bak, not so much collecting but spinning out of stories from Fantagraphics' Mome anthology to depict the naturalist Georg Wilhelm Steller, both at home and in the midst of a perilous expedition. Very much worth your attention. Reviewed on this site by Rob Clough; $11.95.

The Secret Voice #2 (&) It Will All Hurt #1 (&) Titan #1: More comic books? Sure! All three of these arrive from Study Group Comic Books, as distributed to Diamond by Alternative Comics. (I am a contributor to Study Group Magazine, warning. COMICS = INCEST, WARNING.) The Secret Voice presents 48 pages from the adventuresome series by Study Group publisher Zack Soto, which originated (in print) from AdHouse in 2005; don't be confused, however - there's another, more recent #1 from Study Group itself. It Will All Hurt is a now-concluded series from Farel Dalrymple, of last year's very well regarded The Wrenchies; two more issues exist, just not in Diamond-reliant stores. Titan is a 32-page comic by François Vigneault concerning intrigue on a moon station. You can also read all three series as webcomics; $8.00 (Voice), $8.00 (Hurt), $4.95 (Titan).

Blubber #1 (&) Grip: The Strange World of Men: And since it's a COMIC BOOK JAMBOREE this week, why not take in an all-new 24-page pamphlet by Gilbert Hernandez? Six stories are slated for Blubber, purportedly leaning toward the surreal and grotesque, without the burden of all that much text. But obviously this is not Beto's virgin foray into 'difficult' comics, as evidenced by the fact that Grip, a 2002 Vertigo miniseries, is only now seeing a collected edition via Dark Horse, stripped of color and expanded with new story pages. I liked Grip, although I couldn't even tell you what it's about without reading it all over again - there's a skinless guy, a little kid... Blubber sample, Grip preview; $3.99.

21st Century Tank Girl #1 (of 3): Being a new 32-page comic book featuring art by Jamie Hewlett - wow, everyone's showing up this week! Mind you, Hewlett is but one of several artists connected with this project, also involving Philip Bond, Jim Mahfood, Warwick Johnson-Cadwell and others; it originated as a Kickstarted anthology, although the miniseries iteration arrived via Titan Comics. Written, as usual, by Alan Martin; $3.99.

Towerkind: A new Conundrum Press edition of YA-appropriate work by Kat Verhoeven, "an oblique end-of-the-world story seen through the eyes of a diverse group of children in Toronto’s St James Town, a neighbourhood of densely populated high rise apartments," per the publisher. There's supernatural abilities at play too in these 164 pages, previously released as minicomics and nominated for Outstanding Series at last year's Ignatz Awards; $15.00.

Mike's Place: A True Story of Love, Blues, and Terror in Tel Aviv: Your based-on-true-events topical comic of the week, coming from First Second and filmmakers Jack Baxter & Joshua Faudem, recounting a 2003 blues bar bombing in Israel. A documentary film iteration, Blues by the Beach, has also been produced. The artist for the comic is Koren Shadmi. Preview; $22.99.

Jack Kirby's Kamandi, The Last Boy on Earth - Artist's Edition: And finally, this looks to be the most excellent and extravagant among vintage compilations out tomorrow - 160 pages of Kirby's 1972 post-apocalyptic savage land creation, including issues #1-2, #5-7 & #9, inked by Mike Royer. It's 12" x 17", uncolored line art reproduced in color; $100.00. 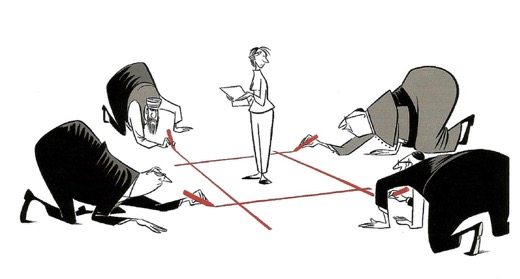 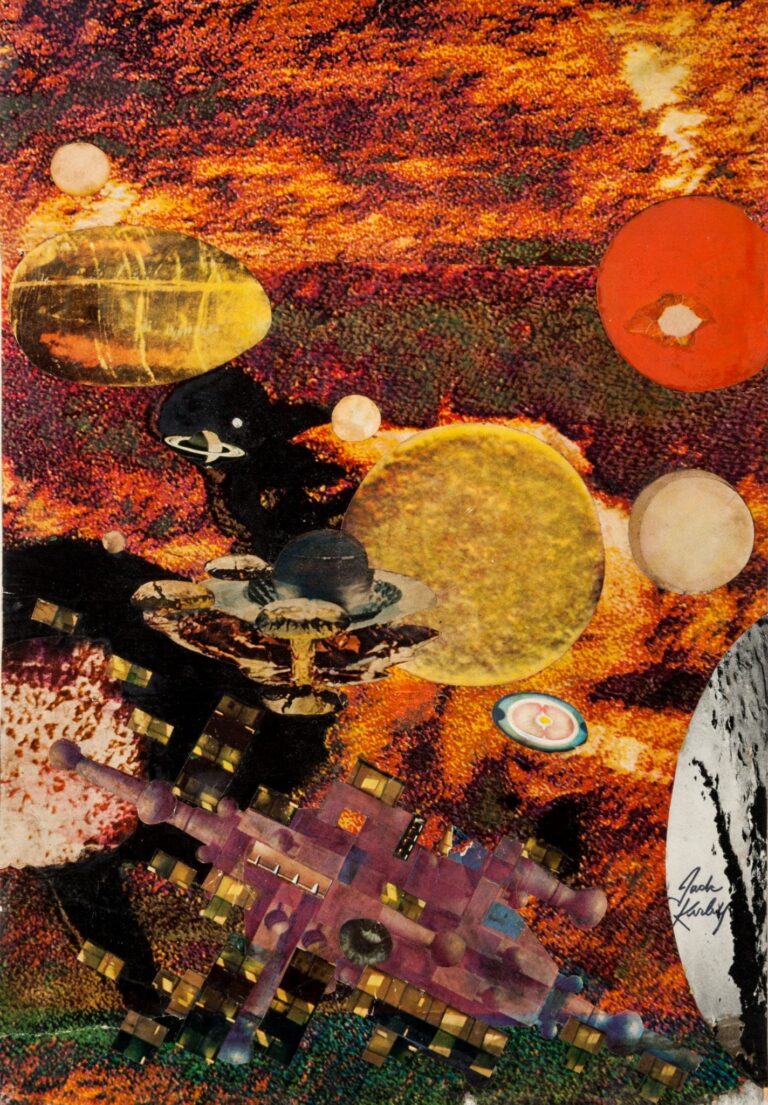