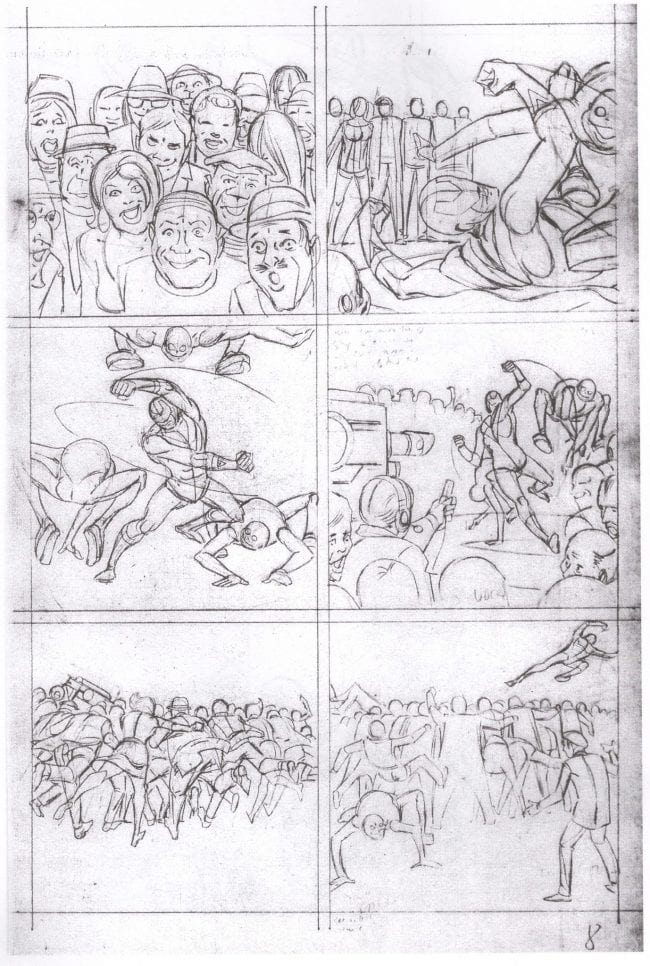 An acrobatic test amidst the scrumming mob, from a specialist in need of no identification. I knew I was a pretty far gone Steve Ditko fan long ago, but it's great to have new confirmation: a 48-page comic I backed on Kickstarter with no idea as to the contents, 17 pages of which turned out to be pencils for an unfinished story from an unknown period, and I was delighted. Most of you know that Ditko maintains an ongoing series of all-new comics as published by himself and Robin Snyder -- issue #26 is forthcoming, hopefully in time for the artist's 90th birthday in November -- but the pair has also been releasing a parallel series of miscellaneous, reprint-heavy comics with a separate, continuous system of numbering. The first such-numbered comic is Mr. A. #15 from November of 2014, though I prefer to think of it as "#15: Mr. A.", since the issue number is the key identifying factor, with the individual comics' repeating titles often drawn from older series. Thus:

(Ordering info here; the publishers are silent as to the contents, retroactive or otherwise, of issues #1-14.)

The Mr. A. issues probably hold the most interest, as they are comprised in significant part of never-before-published complete stories intended for a Mr. A. series in the early 1990s (#24 has already been announced as another Mr. A. issue). The image above, however, comes from The Hero Comics, which collects a pair of stories from the Ditko "Packages" of the millennial period, along with an '09 piece from one of his older all-new 32-page comics, and some assorted one-page images. And, of course, the aforementioned 17-page no-letters, no-inks story, "V? vs. Frog Man". Ditko ultra-fan Nick Caputo has identified the V? character from a lineup of forthcoming characters in Charlton Action: Featuring Static #11 (Oct. 1985), so it's probable (though not certain) that the art originates from around that time.

The new comic's introduction invites the reader to "have a field day imagining what it is all about," so I've decided the titular Frog M[e]n are a gang of internet-bred nihilists who've abrogated all moral responsibility to behave in the manner of animals, luxuriating in their own debasement as a sick statement on the futility of living in a rotten society. V? is a human bystander in a sharp hat and tie who can't help but take action in the fact of injustice, leading to his acquisition of a high-science power belt and a superheroic rebirth in a test chamber not unlike that of noted Superman adversary Doctor Manhattan, a derivation of Ditko's & Joe Gill's early '60s Charlton character Captain Atom. But while D.M. slides into the DCU as a means of justifying chronological aberrations brought on by confused publishing strategies, Ditko here gives us the power of viewing time and space outside of the sequential boundaries of perception. Is this story from before or after Watchmen? With a copyright date of 2017, the answer could be both - such is the creator's Victory. 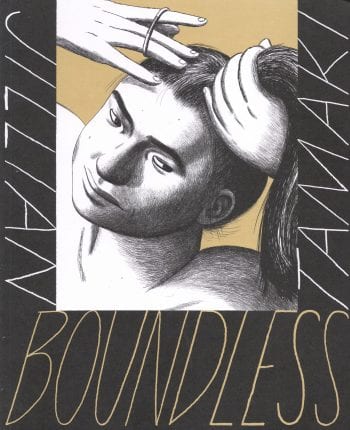 Boundless: Jillian Tamaki is a big enough deal right now that I can sit down in an NYC subway car -- I think it's the E train, probably not just that one -- and see a comic strip-like illustration of hers hanging among the ads, and I don't think it's especially strange at all. This 7" x 8.7" Drawn and Quarterly softcover collects 248 pages of short comics, many of which appeared on the Hazlitt website in 2015 & 2016, though there's also some new stuff, as well as Tamaki's contribution to the 2012 anthology Nobrow 7, and the entirety of her issue of the Youth in Decline showcase series Frontier (#7). Interesting to see how her art expands and contracts given the venue, while the stories remain concerned with people navigating life through the gauzy filter of media, be it television, internet or literature; $24.95. 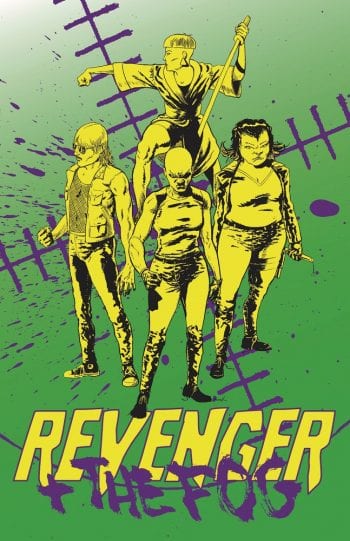 Revenger & The Fog: This is a Bergen Street Comics Press release -- which is to say it's co-published by somebody I do a podcast with, BE WARNED, STAY SAFE -- collecting all of the issues released in the Oily Comics vigilante action series from writer/artist Charles Forsman that were not collected in the prior Bergen Street book Revenger: Children of the Damned. I like this later material more... it's less 'in quotes' (i.e. no Russian cyborg nudity), and applies a more sophisticated back issue rot box coloring scheme to the increasingly feverish character emotions at play, ecstasies of betrayal and loyalty; $18.95.

Canopy: The latest Retrofit/Big Planet release, an 80-page wordless color comic from Karine Berdou, a French artist who's worked with publishers ranging from BD behemoth Delcourt to the Swiss arts-focused publisher Atrabile, which is where this piece originated in 2011. Many small figures caught in various states of motion on unpaneled pages, with themes of family and coming-of-age in a folkloric world; $15.00.

Paklis #1: A new Image debut, and a one-man anthology at that. Dustin Weaver has been working in a very rich & heavy style for a variety of Marvel comics projects for a while (I think he first attracted wide attention in 2010 through the Jonathan Hickman-scripted series S.H.I.E.L.D.), but this is his first creator-owned work, claiming sturdy Euro-Japanese influences a la Moebius, Miyazaki & Ōtomo. New issues are scheduled to arrive monthly at least through #4, so expect more soon. Preview; $5.99.

The Egyptian Princesses: Very direct title for this 2010-11 series from Ukrainian-born artist Igor Baranko, who published a few pieces with SLG early in the '00s (and pencilled some Simpsons comics at Bongo), but really hit his stride with a set of fiercely eccentric historical genre works with Les Humanoïdes on the French market - Jihad (aka "The Horde"), 2003-04, and Shamanism, 2005-06. (He also drew the 2003-08 Exterminator 17 revival for writer/co-creator Jean-Pierre Dionnet.) The Egyptian Princesses, a 244-page b&w softcover, follows the daughters of Ramesses III and their exploitation of "forbidden knowledge of necromancy and black magic" in defense of the throne; $19.95.

Lennon: The New York Years: A Eurocomic of a different type, this 2015 release is based on a '10 biographical novel by author and filmmaker David Foenkinos, adapted by the enormously prolific bit-of-everything BD writer Éric Corbeyran and an artist known only as "Horne". IDW presents the English edition as a 156-page, 8" x 11" b&w hardcover album; $19.99.

Xena: Warrior Princess - The Classic Years Omnibus Vol. 1: C'mon, you remember Xena, right? Syndicated adventure series, ran throughout the second half of the '90s? I'd forgotten that Dark Horse had put out a licensed comic book toward the tail end of the show's run, 1999-2000, and imagine my surprise when I found out it was one of those American projects headed up by a 2000 AD mainstay. No less than Judge Dredd co-creator John Wagner writes most of these 14 comics, now collected into a 360-page Dynamite softcover. The most frequent artist is Mike Deodato Jr., with turns by Joyce Chin, Clint Hilinski and Ivan Reis, while Ian Edginton (who, truth be told, worked on a number of Dark Horse license projects and other American comics prior to doing a lot of work under the 2000 AD banner) scripts the later chapters; $24.99.

Mister X: The Archives (&) Starslayer: The Log of the Jolly Roger: Two actual Dark Horse releases now, collecting works with origins in the 1980s Direct Market (like Dark Horse itself). Mister X is an oddball design-y dark fantasy/noir-ish series created by Dean Motter and published by Vortex Comics beginning in 1984 (a significant delay from the earliest conceptualization of the series from Motter and artist Paul Rivoche). The early issues are notable for the participation of Jaime, Gilbert and Mario Hernandez, after which there's an episode with Ty Templeton & Klaus Schoenefeld, and then the appearance of the young artist Seth, who drew eight issues. The first 14 numbers are collected in a 384-page softcover, with an added story by Neil Gaiman & Dave McKean. Starslayer is a Celtic-warrior-in-space concept from writer/artist Mike Grell, which was initially released by Pacific Comics in 1982-83 before moving to First Comics, and eventually different creative teams. What Dark Horse is collecting is its 224-page softcover is the 1995 Acclaim Comics "Director's Cut" of the Pacific material, which Grell amended with a good deal of new and revised content; $24.99 (each).

Providence Act 2 (of 3): Finally, lest we be misled by the top of this column - the writer Alan Moore still pursues pastiche today, most recently in this Lovecraftian series from Avatar with artist Jacen Burrows. This comic book-sized hardcover collects issues #5-8 (of 12), in which a reporter's meetings with various 'real' supernatural inspirations for fictional horror characters adopt a gruesome and awful poise. Most of my favorite bits in this series are toward the end... I *loved* the final issue, which should be collected toward the end of this year; $21.99. 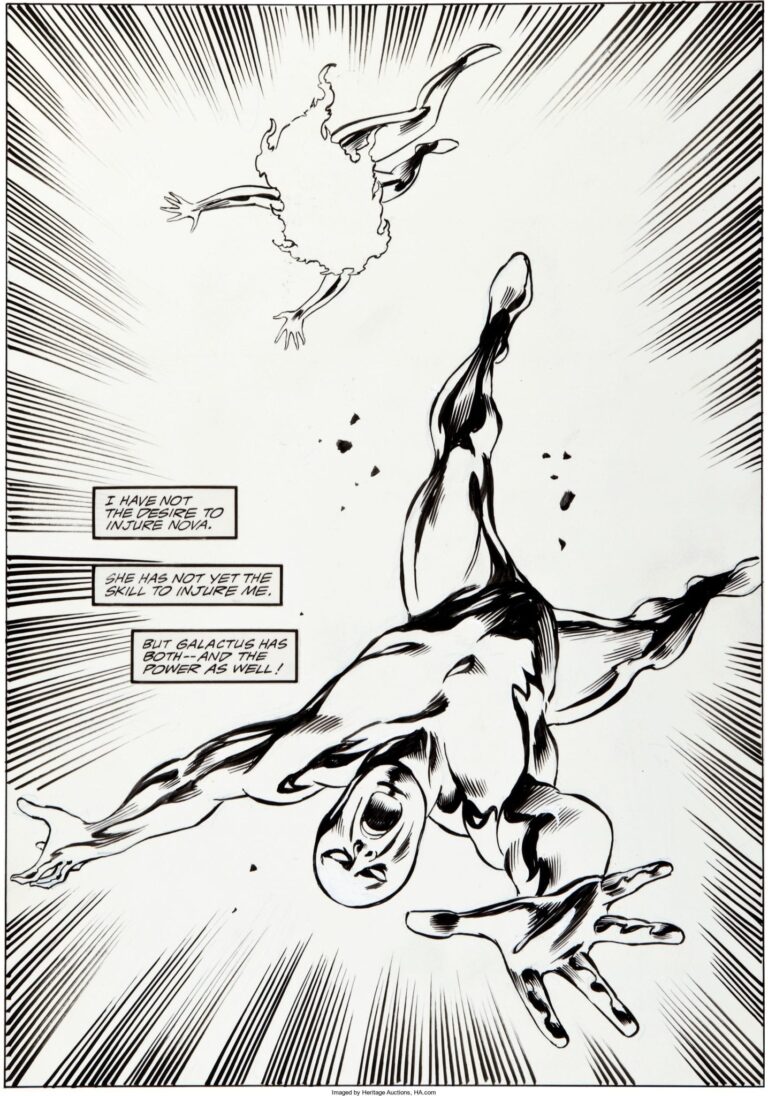 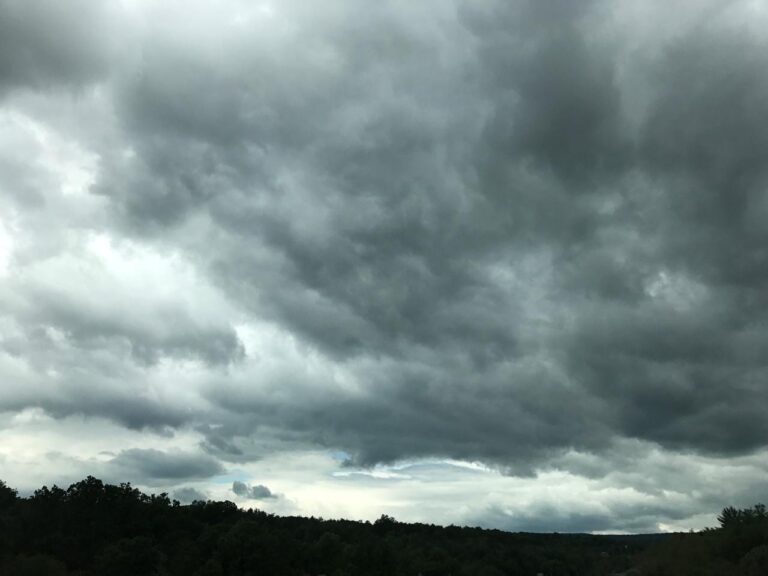