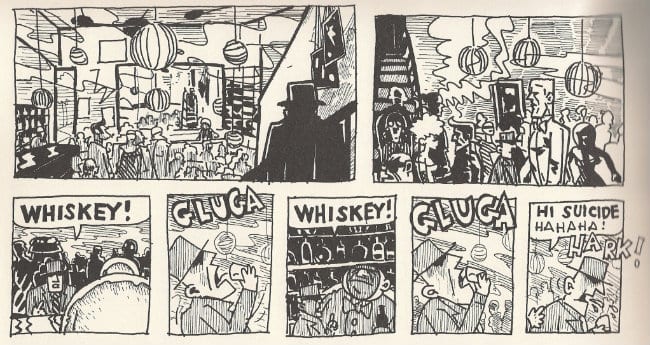 Above we see a detail from Suicide Joe, an enormous 11 3/4" x 16 1/2" comic book, just 20 pages, which I picked up from the Danish Consulate General at MoCCA the other week. I was unaware at the time that the Journal's own Matthias Wivel -- or, at least I'm presuming that's him writing -- had previously named it one of the best Danish comics of 2010, though it actually dates from 1984; I'm not sure if it was actually published back then, though it is certainly available now from Fahrenheit. There are many things I don't know, though I'm certain I like the comic.

The artist is Peter Kielland, presently a contributor to Wivel's Kolor Klimax: Nordic Comics Now collection from Fantagraphics, though some might recall the 2004 Kim-Rehr Productions release of his wordless Fish. This, in contrast, is mostly in fragmented, elliptic English, following an artist who specializes in desecrating other people's work and slashing up bodies for exhibition in his lucrative Suicide Gallery. Yet these deaths are demonstration not suicides, and Suicide Joe remains dissatisfied as his lack of comprehension of art, money, life and death, an unease that sets him down a path of discovery through bars, whores, psychologists, religion and medicine, all of it rendered in a slashing style evocative -- so Matt Seneca told me -- of classic RAW, its large pages accommodating upwards of 23 panels per shot, yet never seeming more crowded than the nervous story requires.

Matt and I are going to get into this a little more pretty soon, so I don't want to go in too deep, but I have to mention how young and anxious a comic this feels, eager to segue from noisy groupings of panels to comparative quiet, if always crossed through with shadowing lines; there's never a moment where Kielland's Joe seems to stop thinking, and so there is never a page where the artist is not anxious about art as desecration, and desecration as nonetheless a failure to grasp something profound. The ending then seems inevitable, as Joe realizes that his art can embodies stillness to him only when divorced from the reality of his creation of it, when placed in a gallery where even sensitive minds and able curators can only analyze what it could have meant to him. From there, the artist too becomes part of the exhibition, frozen in time by the narrative of aesthetics, and truly dead. If Suicide Joe is only now being published in the '10s, laid down on paper and set out for sale, then maybe it's finally dead to Kielland, though I wonder if divesting himself of such youth isn't now a relief. 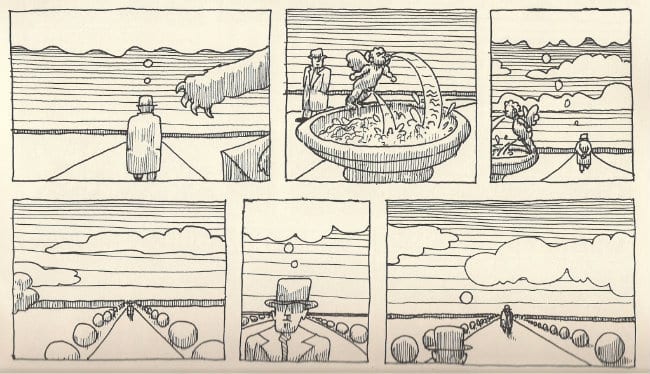 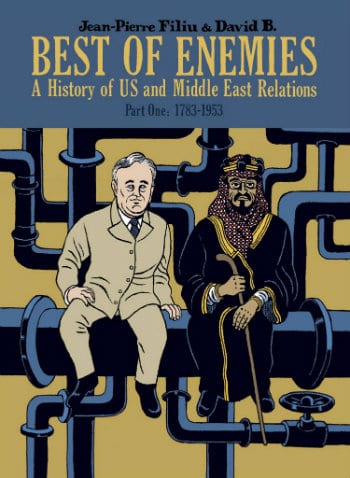 Best of Enemies: A History Of U.S. and Middle East Relations, Part 1: 1783-1953: Certainly the first thing I'd look at this week - a new 120-page SelfMadeHero translation (distributed in North America through Abrams) of a 2011 work by L'Association co-founder David B[eauchard], collaborating with Jean-Pierre Filiu to draw "striking parallels between ancient and contemporary political history," per the publisher. My understanding is that it blends some of the fable style of The Armed Garden with the essay narration of the artist's unfortunately stalled Babel, which is to say it's a completely "David B." kind of comic, despite its sober 'relevant political topic' packaging. Sample; $24.95. 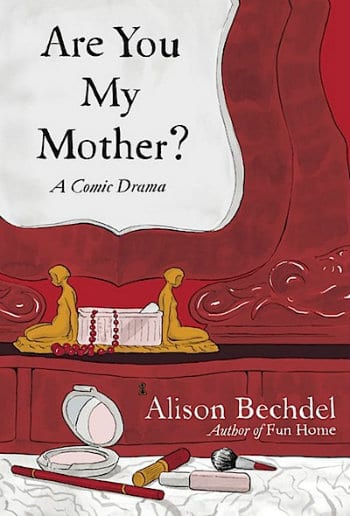 Are You My Mother? A Comic Drama: And elsewhere in big box bookstore hits & floridly digressive narration, Alison Bechdel follows up 2007's Fun Home: A Family Tragicomic with a 224-page Houghton Mifflin Harcourt examination of her relationship with her mother. Bechdel has since become something of an axiom online, so I find it helpful to recall that Fun Home was not altogether warmly received in dedicated comics crit circles upon its release, in that such chilliness was tied, I think, to the work's qualities as a constructed narrative; Bechdel is not a 'natural' cartoonist by the typical understanding, shooting photo-reference for apparently every panel and drawing her story together as if forming a scrapbook of her past, chapters organized as discreet thematic units -- often riffing off some pertinent literary exposure in that segment of her youth -- yet pregnant with images and text that recur throughout the work in updated contexts, and a narration that tends to comment reflexively on its own citations. It's an obsessively analytic approach to comics creation -- at odds with the freewheeling, hugely vivid, visceral, iconographic approach of a David B., despite working in an ostensibly similar essay mode -- inseparable from the disposition of the work itself, and I'm interested in seeing how it develops. Samples/interview; $22.00.

100 Months: I've highlighted this one before, the final longform work by John Hicklenton -- maybe my all-time favorite 2000 AD artist, with Nemesis the Warlock and Heavy Metal Dredd credits of some note -- "a parable of environmental devastation" created during his prolonged struggle with multiple sclerosis, which the artist concluded on his own volition shortly after the book was completed. Cutting Edge Press initially released the 172-page hardcover in 2010, but I believe this is the first time any edition has been made available in North American comic book stores via Diamond. Samples; $29.95.

But I Really Wanted to Be an Anthropologist: This is a second SelfMadeHero offering for the week, collecting 176 pages of humorous color comics and illustrations from the Paris-based Margaux Motin, I believe culled from her website. Very pleasing linework on this; $24.95.

The Fairy Tales of Oscar Wilde Vol. 5: The Happy Prince: Being the newest release from P. Craig Russell, an original 32-page, 8 1/2" x 11" hardcover album, its format designed to match prior installments of the series dating back to the early 1990s (though vol. 1, The Selfish Giant and the Star Child, is also seeing new hardcover and softcover editions this week). The Wilde story dates from 1888, concerning money and satisfaction; its adaptation marks Russell's Opus 66, if you're keeping track. Preview; $16.99.

30 Days Of Night: 10 Bloody Years - Treasury Edition: But as much as I like the Library of American Comics stuff, I've gotten pretty piqued by this short-form, large-sized reprint effort they've been spreading across their wares, offering samples of elsewhere-collected materials in a 9 3/4" x 13" glossy format at a pretty low price, presumably due to the already-done state of the work. This time it's the complete original 2002 Steve Niles/Ben Templesmith vampire miniseries -- arguably the work upon which the publisher's fortune was built -- getting the oversized treatment, which should prove interesting with all that blood and smudging; $9.99.

Deadenders: In which DC/Vertigo suddenly reminds you of a project you couldn't even place exact years on without help, specifically here the 392-page entirety of a 2000-01 series from writer Ed Brubaker and artist Warren Pleece (inked, at different points, by Richard Case, Cameron Stewart and Jay Stephens), concerning combative teenagers of the shitty future. Sixteen issues seems like an enviable run today, given the circumstances; $29.99.

B.P.R.D. - Hell on Earth: The Devil's Engine #1 (of 3): Notable for marking the return of the series' arguable primary artist Tyler Crook, following some really striking part-time Hellboy universe contributions by James Harren (of The Long Death) and Tonci Zonjic (over on Lobster Johnson: The Burning Hand). Written by Mike Mignola & John Arcudi, as usual. Preview; $3.50.

The Flowers of Evil Vol. 1: This is Vertical's newest manga series, an ongoing shōnen high school comedy (its sixth volume imminent in Japan) that might seem like a sop to orthodox fan tastes, until you realize that 'fan tastes' run to scenarios involving a nervous middle school kid's accidental theft of a crush object's gym clothes and his subsequent blackmailing by a foul-mouthed weird girl classmate -- apparently based on a real childhood acquaintance of creator Shuzo Oshimi -- into situations poised to needle his most severe anxieties. The result is basically male humiliation porn for junior high-schoolers that appears to have won its fit-for-12-year-olds designation solely by virtue of avoiding any on-panel nudity, an effect cheerily enhanced by the f-bombs and miscellaneous other profanities sprinkled over the English translation. Or maybe everyone down at Bessatsu Shōnen Magazine knew it'd be impossible for any real heat to rise from Oshimi's stone-boring, anime dōjinshi-looking artwork, his anti-heroine enough of a Rei Ayanami/Yuki Nagato fetish clone icon to make one wistful for draconian copyright enforcement. Nonetheless, you probably won't see another mainstream comic this week depicting a flush-faced schoolgirl ripping a screaming boy's clothes off and forcing a pair of sporty ladies' bloomers onto his writhing body, unless Hulk Smash Avengers goes rogue; $10.95.

Saturn Apartments Vol. 5 (of 7): But if that's a little too rich for you, Hisae Iwaoka has a really soft, round cartoon style I'm always happy to see, and now Viz has another 192 pages of her 2006-2011 slice-of-life-in-space series from its SigIKKI line of older-skewing series. Sample chapter from vol. 1; $12.99.

Kamen: Speaking of digital manga efforts, last year saw the launch of GEN, a monthly collection of actual dōjinshi efforts -- which, setting aside my derogatory reference above to anime fan comics, is a term encompassing any self-published Japanese manga -- aimed at older audiences. I can't say I've read any of it, but it's nearly a year old now, and Kamen appears to be the first collected edition of applicable materials, a 258-page story from Gunya Mihara concerning a masked man of justice. You can also buy a digital edition for two bucks, if you so choose; $9.95.

Walt Kelly: The Life and Art of the Creator of Pogo: Finally, your book-on-comics of the week, a 224-page Hermes Press tribute to the man of the title, promising art from the comics and animation arenas, as well as essays, appreciations and other coverage; $49.99.