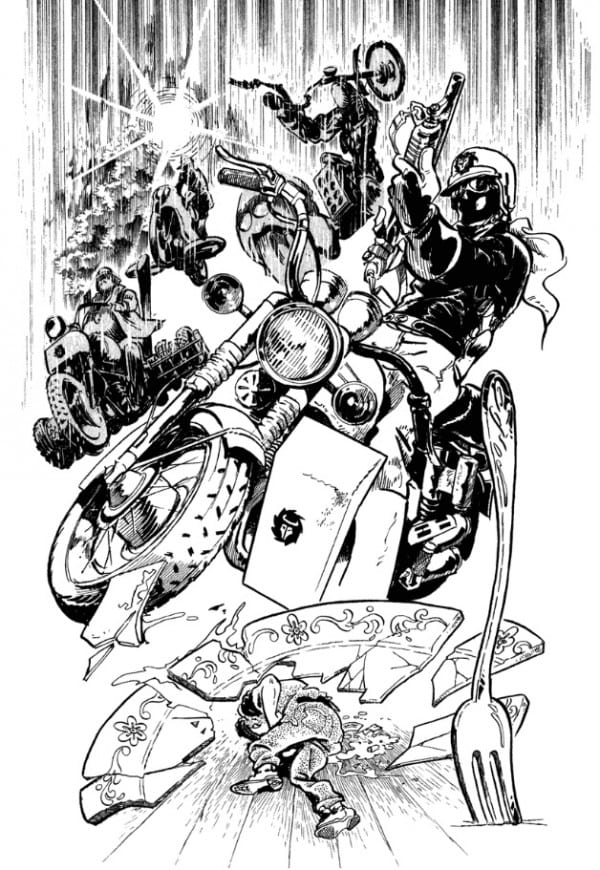 This past Sunday saw the death of Mikiya Mochizuki, a manga pro for over half a century, best known for the energetic and bullet-riddled motorcycle action series Wild 7. Debuting in 1969, and continuing in various media forms well into the 21st century -- there was a live-action film in '11, though older Japanese audiences would better remember a '72-73 television drama -- the series concerned the activities of a group of criminals recruited to battle yet-worse crime in a semi-official capacity, thus evading the needless restrictions of legality. It is not especially well-known in English, with only a 1994-95 anime video series and seven volumes of the earliest manga (via the now-defunct ComicsOne) officially released. The image above is from a 2002-03 spinoff project Hiba - Another Wild 7, which (from what parts I've seen, mind you) saw his drawing manifest in a very furious, almost caricatural form. 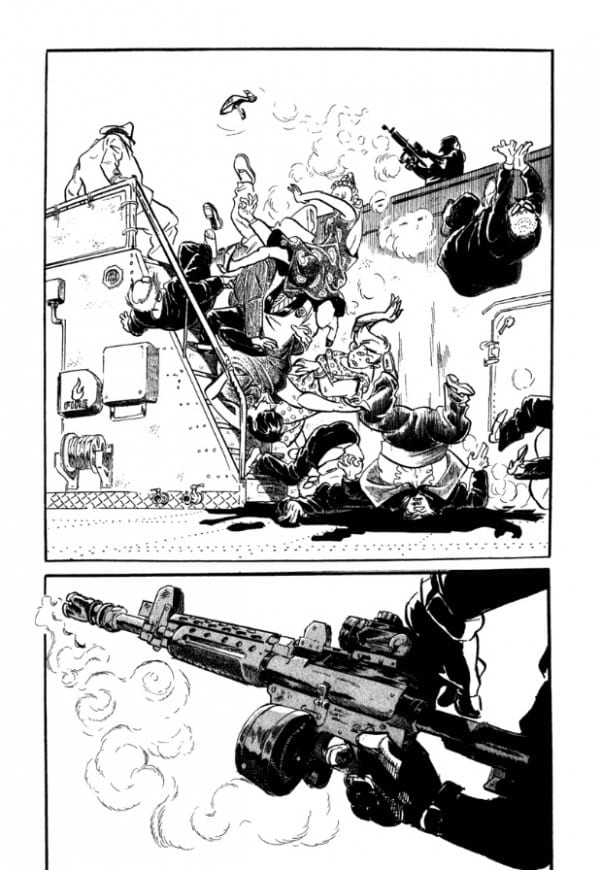 Compare this with the cleaner boys' comics style of the original manga. 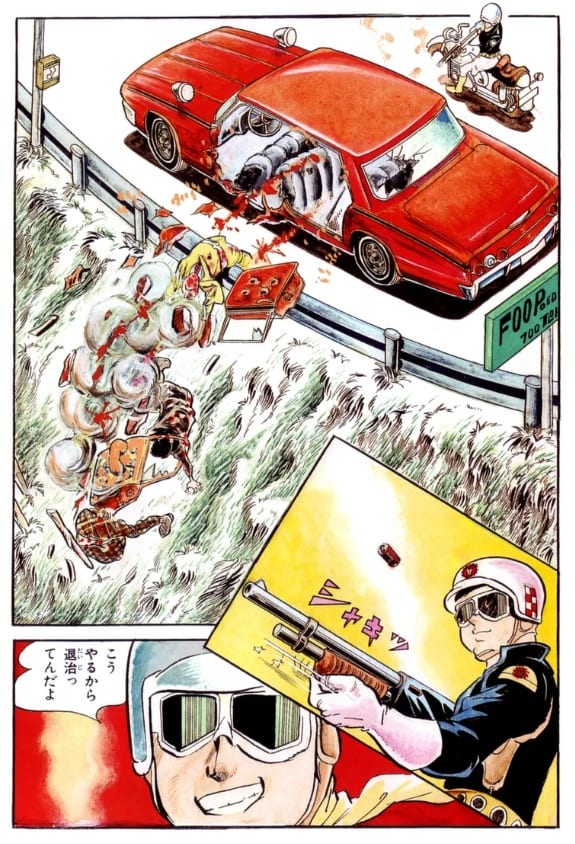 Still unnervingly brutal, but also given to cartoon fancy - years before, Mochizuki had been an assistant to Tatsuo Yoshida, co-founder of Tatsunoko Production and creator of Speed Racer; comparisons between the two franchises have proven difficult for commentators to resist, though the shell casing-strewn highways of Wild 7 are a long way off from the sprightly intrigues of Racer X and Chim Chim. 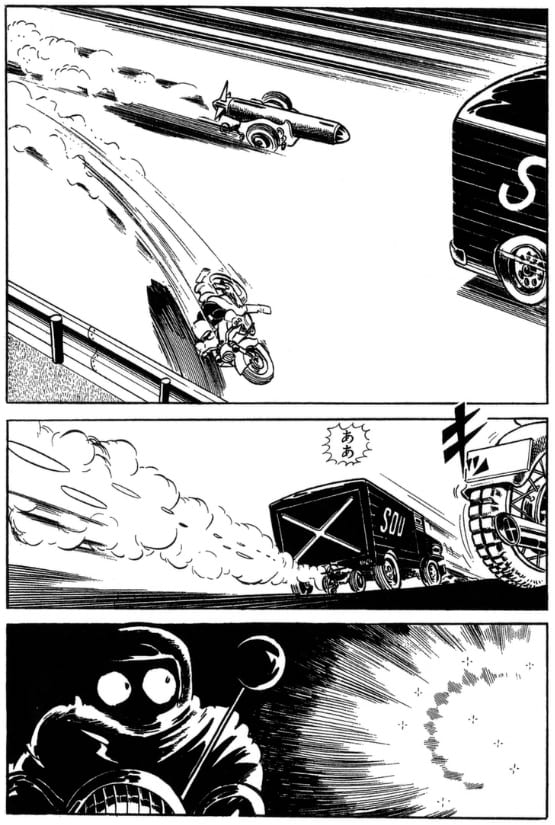 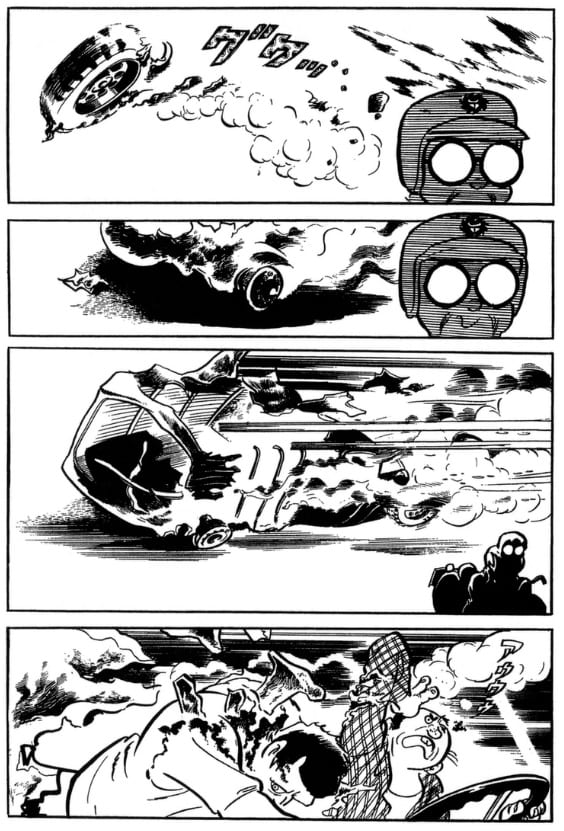 I cannot claim to be any sort of expert; for one, I am unfamiliar with the many comics Mochizuki drew that were not related to Wild 7, and even with that my experience with the art is very limited - sometimes restricted to random chapters from ongoing projects I've encountered entirely by accident. For example, in 2014, I was paging through Katana, an e-magazine I'd received for free by buying a crapload of digital manga from eBookJapan. As it happened, Mochizuki was serializing yet another installment of his signature franchise, this time direct-to-digital and in full color. It was titled W7 - New Century Wild 7, and I was astonished by the energy displayed by this 75-year old artist - probably employing studio assistants, sure, but in a manner that retains the mad velocity of an earlier manga time. 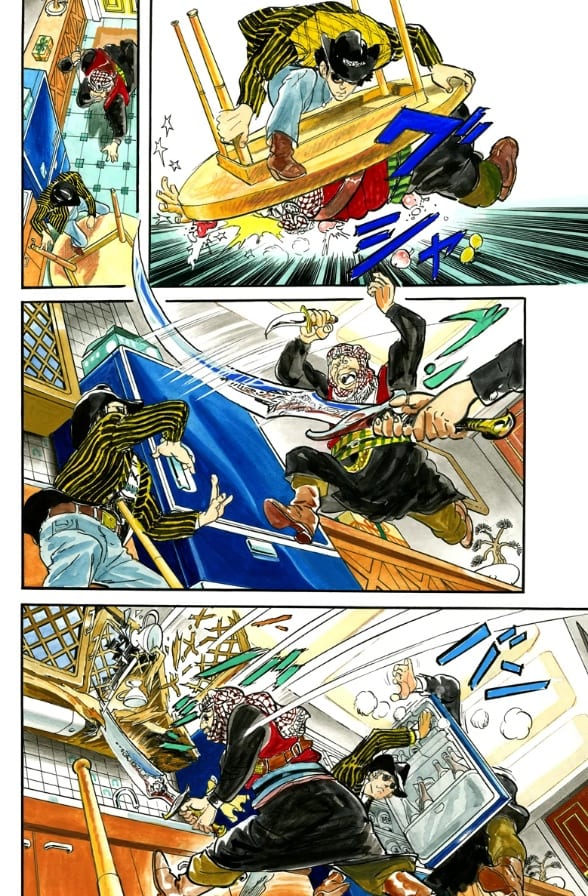 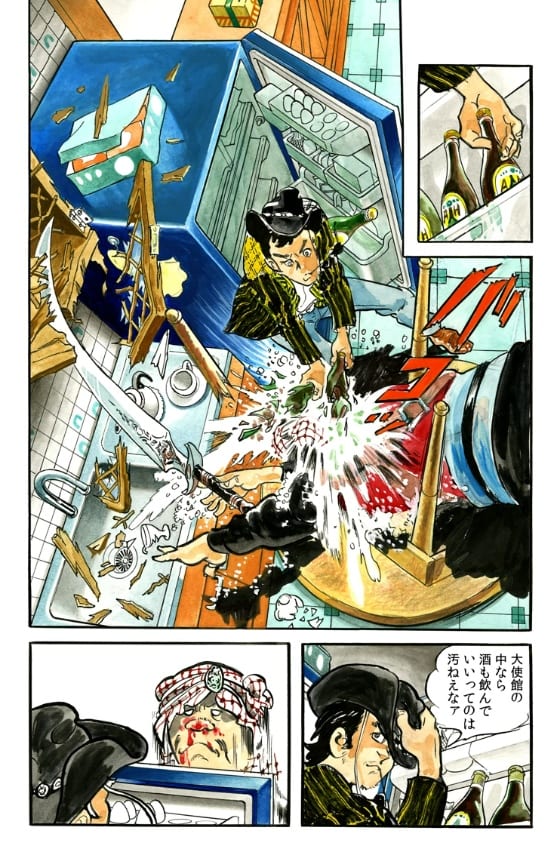 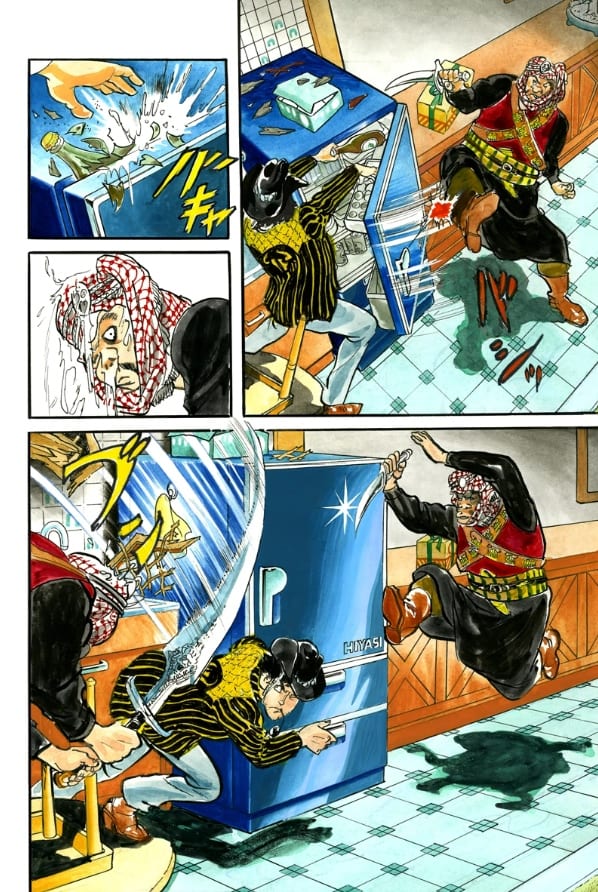 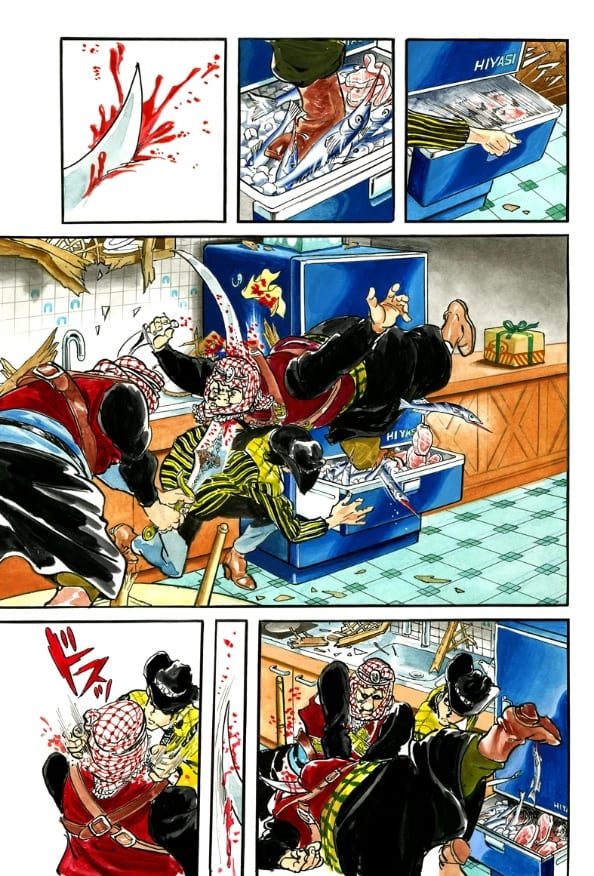 Why a cowboy is battling scimitar-wielding toughs in some sort of kitchen for global exotica is not a question I can answer, though apparently this saga weighed in at 460 pages when ultimately collected in a deluxe 5000 JPY print edition. Not likely to appear in English any time soon, but still a fearsome final monument to this history of violence. 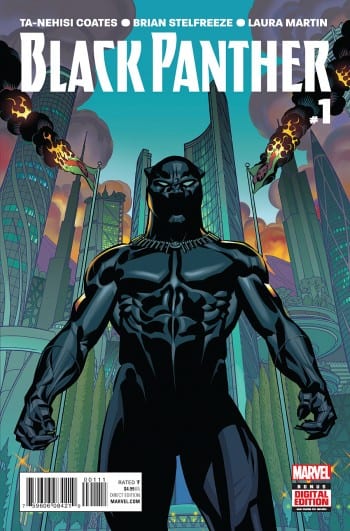 Black Panther #1: Many superhero comics will claim to be events this year, but none will actually be as attention-worthy as National Book Award-winning author and essayist Ta-Nehisi Coates taking up writer's duties on this latest rendition of the Stan Lee/Jack Kirby creation. The last time Marvel worked with a highly acclaimed superhero comics neophyte we got the superb Jonathan Lethem-scripted Omega the Unknown; unlike that sealed-off and rather 'alt'-styled project, however, Coates will be pursuing an in-continuity run, drawn by veteran superhero artist Brian Stelfreeze. Coates has laid out plans to detail the nation of Wakanda as a conflicted contemporary monarchy in addition to exploring new superpowers for the title character, while also folding in allusions to African American poetry, literature and popular art - definitely worth a look. Preview; $4.99. 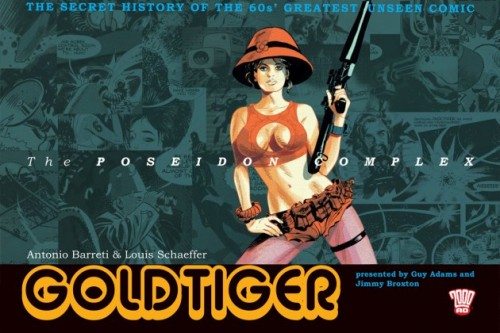 Goldtiger: The Poseidon Complex: This one is interesting in several ways. First off, it's an original graphic novel bearing the 2000 AD brand - the first of its kind, resulting from publisher Rebellion taking on the project subsequent to a 2013 Kickstarter campaign. Moreover, it's a comic 'about' the mid-century UK comics scene, in the form of a Golden Age of Reprints-type landscape-format collection of an 'unpublished' Modesty Blaise-type adventure serial pairing a mild British writer with a driven and eccentric continental artist to commercially disastrous effect. In fact, the whole thing is the invention of writer Guy Adams and artist Jimmy Broxton, who've even cooked up some cod-scholarly supplemental texts, eventually folding the origins of 2000 AD itself into the 125-page mix. Between this and Sonny Liew's The Art of Charlie Chan Hock Chye, we may be teasing a new trend for fake vintage comics-as-national histories; $27.99.

5,000 km Per Second: It's Fantagraphics that brings our Eurocomics pick - a 144-page, 6.5" x 9.25" watercolor album from Italian-born Manuele Fior that took the Fauve d'Or at Angoulême in 2011. The artist has deemed it "a fake autobiographical book," divining from fiction alternate paths and expectations from his life, along with specters of failure. Specifically, though, it's about two lovers and their encounters across several decades. Looks exceedingly sleek and pretty. Samples; $22.99.

The Odyssey of Sgt. Jack Brennan: This is a new 160-page linked-story anthology from Pantheon, informed by the work of writer Bryan Doerries, founder of the Theater of War, an organization that presents classical Greek drama to military service members and veterans in North America and Europe as a means of addressing "psychological and physical injuries." The book is framed by a Marine sergeant relating relevant tales of Odysseus, with different sections illustrated by artists drawn from several different comics spheres - Jess Ruliffson, Joëlle Jones, Dylan Meconis, Justine Andersen and Nick Bertozzi; $19.95.

The Whisper Campaign: Norm Breyfogle is perhaps best known to you all as one of the signature Batman artists of the late '80s/early '90s; last December he suffered a stroke, resulting in significant physical problems and sizable medical expenses. This 280-page ComicMix production, bolstered by a crowdfunding campaign, functions as both a fundraiser and a reprint project, presenting Breyfogle's entire 1986-88 run drawing First Comics' political action series Whisper (written by Steven Grant, with some inks by John Nyberg and Paul Guinan), along with all-new comics by the likes of First stablemates John Ostrander & Timothy Truman, among others; $50.00.

Birdsong: A Story in Pictures (&) The Real Poop on Pigeons!: Toon Books continues to supply short, kid-friendly works by experienced alternative and arts-minded comic artists. Birdsong is the new book by James Sturm, co-founder of the Center for Cartoon Studies; it's intended as a homage to kamishibai, the Japanese narrative tradition in which a storyteller spins a yarn to a gathered crowd with the assistance of pre-made sequential images. Sturm supplies the wordless pictures here, while you (or your duly encouraged tot) devise personal elaborations across 60 pages, including some historical texts on the history of this comics-adjacent practice. Elsewhere, The Real Poop on Pigeons! serves 40 pages of educational fare from artist and educator Kevin McCloskey, previously of Toon's We Dig Worms!; $12.95 (each).

Providence #8 (of 12): Hey, it's Alan Moore again. I keep bringing up this H.P. Lovecraft-informed series because it's become somewhat unpredictable in terms of release - in a January interview, artist Jacen Burrows mentioned that he was working on issue #9, so 'roughly bimonthly' seems like a safe bet for future scheduling guesses. This time around, we're likely to meet the Moore/Burrows version of Randolph Carter, perhaps further sewing together the hidden story of America as a crucible for diabolical traditions; $4.99.

Lobster Johnson: The Forgotten Man (&) Empress #1: Two big-time comic book comics, all but assuredly stocked at whatever store you choose to visit. The Black Panther spotlight up top notwithstanding, I don't read a lot of superhero comics anymore, though I do always make time for Lobster Johnson, creator Mike Mignola's ongoing tribute to guns-roarin' pulp magazine maniacs of yore. High standards for collaborators too, such as the smooth Danish stylist Peter Snejbjerg on this special one-off issue, working with frequent Mignolaverse co-writer John Arcudi. Empress, meanwhile, finds writer Mark Millar returning to Marvel -- albeit in a creator-owned capacity -- with artist Stuart Immonen, for an extended sci-fi concept (I think slated for 18 issues) about the wife of an intergalactic tyrant grabbing the kids and fleeing into a star system full of worse-than-usual perils for a woman in her position; $3.50 (Lobster), $3.99 (Empress).

Comic Book Legal Defense Fund Defender #5: Finally, your publication-about-comics for this week is this newest edition of the CBLDF's official giveaway magazine, focused on the question of: "Why are comics about diversity or by diverse creators so frequently banned and challenged?" There will also be an interview with filmmaker and comics writer Reginald Hudlin, and coverage of "Censorship on Campus", going off the cover art; $0.00. 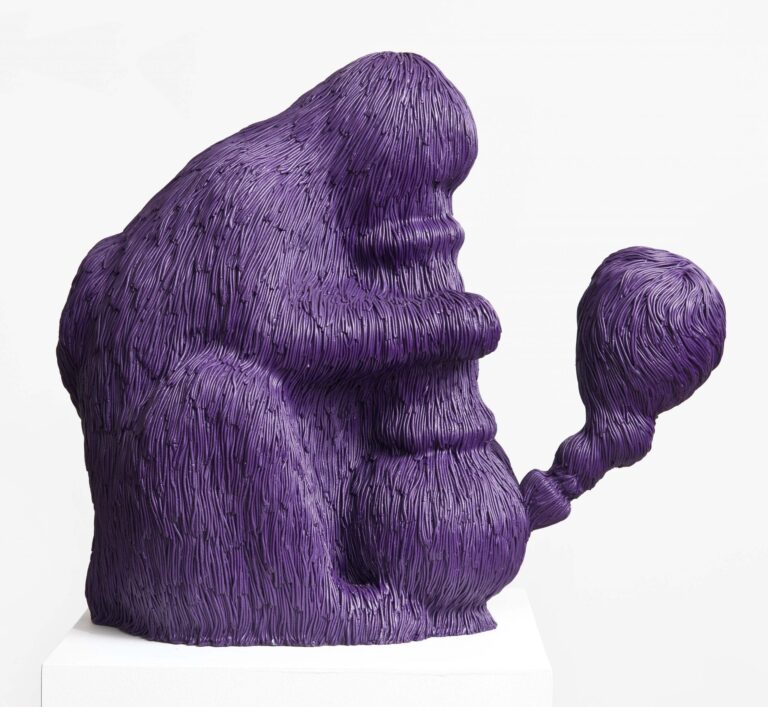 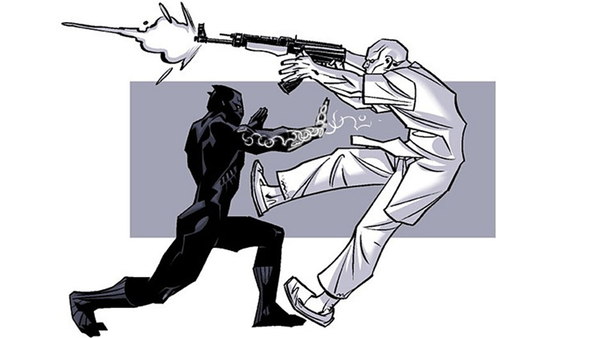