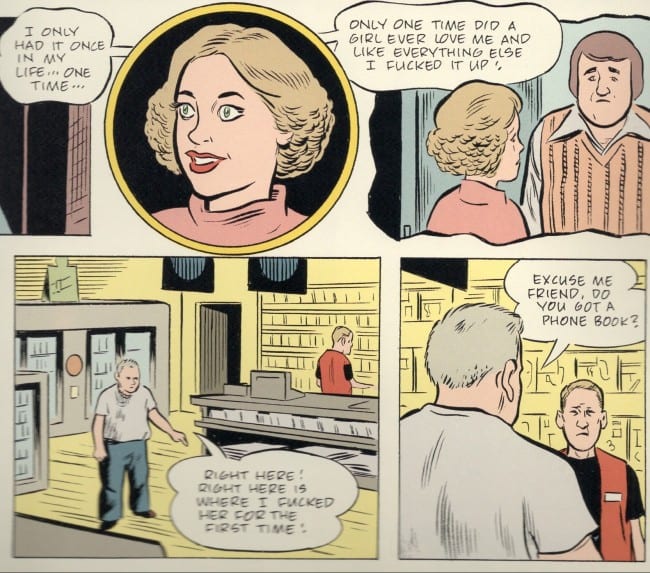 This isn't the last time you'll be hearing about Dan Clowes' Patience this week on the site, but I'd wanted to mention something while the time is right. From reading interviews, I'd gotten the idea this was going to be "Steve Ditko's Je t'aime, je t'aime," which inflated my expectations to unrealistic levels - like, the book would have to physically bring me to Paradise (which, it turns out, would be real) in order to live up to that. Pragmatically, though, I think the above image reveals a more direct predecessor, with its own set of fascinations. It's a page detail from "Sawdust", Clowes' contribution to 2008's Kramers Ergot 7, which remains an all-time blast for hoisting atop a consumer-grade scanner. Due to the enormous dimensions of Kramers 7, there is a special character to "Sawdust" - it's very much a contemporary 'take' on an EC crime comic, but the entire thing fits on one page, with one event after another heaping atop its bitter protagonist until the inevitable police intervention draws his sorry life's journey outside the prison system to a close.

In "Sawdust", we can easily discern Clowes' fascination with socially marginal, embittered men, but we can also glimpse elements shared with the later Patience: the desire to reverse time as a means of reconstructing one's romantic life, joined with the protagonist's expository, retrospective narration as he engages in bad behavior. Indeed, with the thoughts of various characters lining the tops of many panels, Patience feels even more an evocation of the Crime SuspenStories of Johnny Craig or Jack Kamen, which further brings to mind the commonalities between Clowes' work and Charles Burns' similarly-informed approach - yet while Burns' recent trilogy of hardcover albums (X'ed Out et al.) plays with varied levels of 'reality' cum genre devices, Clowes' "Sawdust" and Patience engage quite straightforwardly with genre stuff. Compared with even David Boring, mysterious three-act structure and all, or The Death-Ray, with its explicit superhero tropes, Patience feels much less distanced, and not particularly critical; it really is predominantly about a brooding anti-hero who'll go the distance to Save His Lady, its deviations into said titular lover's own psychology less subversive than narrative good housekeeping. Even the more basic mainstream comics do such self-assessment now.

Incidentally, this places Patience into a far more conventional narrative space than the weird European SF movies Clowes has mentioned as an inspiration; it's less Resnais than a midcentury comic book adaptation of same - or, is this what Resnais' movie with Stan Lee would have looked like? Regardless, if Clowes' appeal with filmmakers holds, it won't be very much trouble for some young-but-not-too-young actor to explore their Liam Neeson side through these devices. The angst of Patience is like the angst of David Boring, or The Death-Ray, but no longer so easily divisible from something like Looper, more than willing to accommodate a big Act III action climax to hose off the mess of its two-fisted hero's paternal concern and guide him, quavering, thorough the justifications for his suffering. 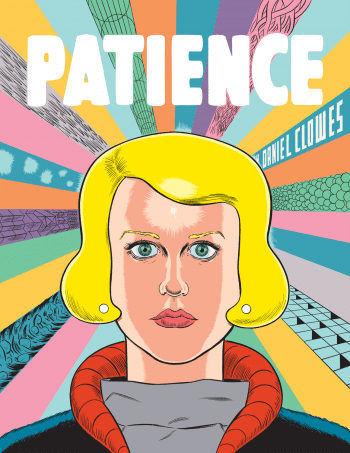 Patience: So yeah, Patience. Keeping on the movie theme, you might consider its weeks of Direct Market availability a 'limited release,' while this Diamond-acknowledged distribution to whatever comic book stores are left coincides with big box bookstore/Amazon.whatever distribution to approximate a 'wide release.' No matter how you get it, though, it remains a 180-page color hardcover from Fantagraphics, sized at 7.75" x 10"; $29.99. 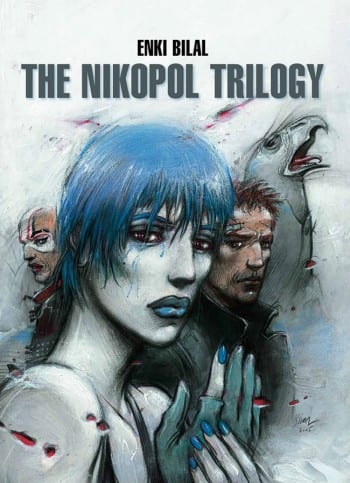 The Nikopol Trilogy: By sheer coincidence, this week offers a second large hardcover from a cinema-connected artist, representing male perspectives on an elusive woman in the midst of SF intrigue. And he's worked with Resnais! Enki Bilal, though, will not provide quite so much in the manner of narrative tidiness, working through a considerably different tradition of genre comics maturation - time spent in the French '70s with the political narratives of the writer Pierre Christin, and the visual wanderings of Métal Hurlant magazine. Running irregularly from 1980 through 1992, The Nikopol Trilogy is one of Bilal's signature bodies of work, an unruly thatch of mythology, dystopia, sex and fantasy (if not always sexual fantasy) that completely embodies his very particular aesthetic. The last time this was all readily available in English was 2004, so many will welcome a 184-page edition from Titan, presented at 9.6" x 12.8". Samples; $34.99.

Sleepless and Other Stories: David Chelsea's 24-Hour Comics Vol. 2: One of the most laudatory facets of Dark Horse's varied catalog is its continued affection for David Chelsea, one of the most unique alternative era cartoonists. This is a second compilation of comics made in one day each, 168 pages' worth, probably witty and highly varied. Preview; $19.99.

Power Button #0: This is another comic that's been out in stores for a little while, though Diamond hasn't noted its release until now - the artist is Zack Soto, creator of The Secret Voice and head of Study Group Comics (which prints writing by me, on occasion). It's the 32-page start of a new all-ages series, with space battles and creatures and such. Your Genuine Alternative Comic Book of the week, published by Study Group and distributed by Alternative Comics. Preview; $4.95.

Woody Guthrie and the Dust Bowl Ballads: I guess Patience also counts as your bookstore-mainstream comic of the week, but if you're into something more historical/biographical, there's also this Abrams release of work by UK cartoonist Nick Hayes (of 2011's The Rime of the Modern Mariner), a 272-page portrayal of the famed folksinger as he lived from the 1920s through the '40s. Record album square at 8.25" x 8.25", in hardcover; $24.95.

Mysterious Girlfriend X Vol. 1: Only this could be your manga pick. Or, *my* manga pick. This Riichi Ueshiba series was (and remains) available on the Crunchyroll digital manga subscription service, where it became a pretty big guilty pleasure of mine for a while - it's a comedy about a schoolboy who falls under the power of a weird classmate when he becomes addicted to her spit. Hi-jinx verily ensue, but drawn in a really engaging and pleasurably roughshod manner, characters sometimes little more than thick outlines adorned with facial features, and backgrounds sometimes piling with odd details. Very handmade, with some energetic page composition and pacing. Now Vertical debuts the print edition, doubled up to 404 pages from the Japanese printings, which should place the whole the series at six volumes; $15.95.

Paradise Residence Vol. 1 (&) Legend of the Galactic Heroes Vol. 1: Dawn: More Japanese stuff, from veteran creators. Kōsuke Fujishima's Oh My Goddess! was an evergreen translation favorite for the many, many years the series was in production, though I haven't heard a lot about his newer series, the boarding school comedy Paradise Residence, which has run irregularly since 2008. Now English readers can find out for themselves via Kodansha. Legend of the Galactic Heroes, meanwhile, is a mighty sprawl of 1980s SF prose novels from Yoshiki Tanaka (also of The Heroic Legend of Arslan), famous as the source material for a 110 (one hundred and ten) part anime video series, released over the course of a decade through the growth and pop of the bubble economy. VIZ handles the publication of this first installment, with two more to follow, and then maybe the rest if sales warrant; $13.99 (Paradise), $15.99 (Heroes).

Judge Dredd: The Complete Case Files Vol. 11: Of the many and varied Dredd collections, this is the Simon & Schuster North American iteration, which hits up the late '80s for what should be the expansive "Oz" storyline from writers John Wagner & Alan Grant, with art by Jim Baikie, Will Simpson, Brendan McCarthy, Steve Dillon, Barry Kitson and others. Other stories too, since this is 400 pages; $19.99.

The EC Archives: Shock SuspenStories Vol. 1 (&) Eerie Archives Vol. 21: Two weighty Dark Horse hardcovers of vintage stuff, one of some vintage itself, as the first Shock SuspenStories of the EC Archives was released in 2006 by Gemstone; Dark Horse has apparently looped around to doing their own version, with filmmaker Steven Spielberg's introduction still included. It collects issues #1-6 in a landmark series of socially aware 1950s narrative reversals. Further down the hall, Eerie Archives plunges into the final months of the 1970s with issues #100-103, with art by Jim Starlin, Alfredo Alcala, Pepe Moreno, Paul Gulacy and others; $49.99 (each).

Comic Book Apocalypse: The Graphic World of Jack Kirby (&) Alex Raymond - An Artistic Journey: Adventure, Intrigue, and Romance: And finally, a pair of books-about-comics to round out the week. Comic Book Apocalypse was a 2015 exhibition at California State University, Northridge, curated by Journal contributor Charles Hatfield - the book arriving in stores is an IDW exhibition catalog, 168 pages at 8" x 12", featuring texts by Glen Alan Gold, Diana Schutz, Howard Chaykin, Carla Speed McNeil and others. An Artistic Journey is a 10" x 13" Hermes Press production of a monograph by Journal columnist Ron Goulart, with many scans of the newspaper strip favorite's original art; $39.99 (Kirby), $75.00 (Raymond). 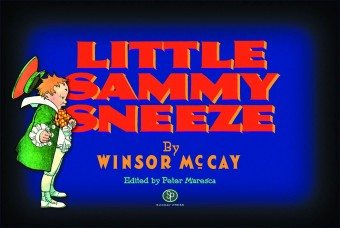 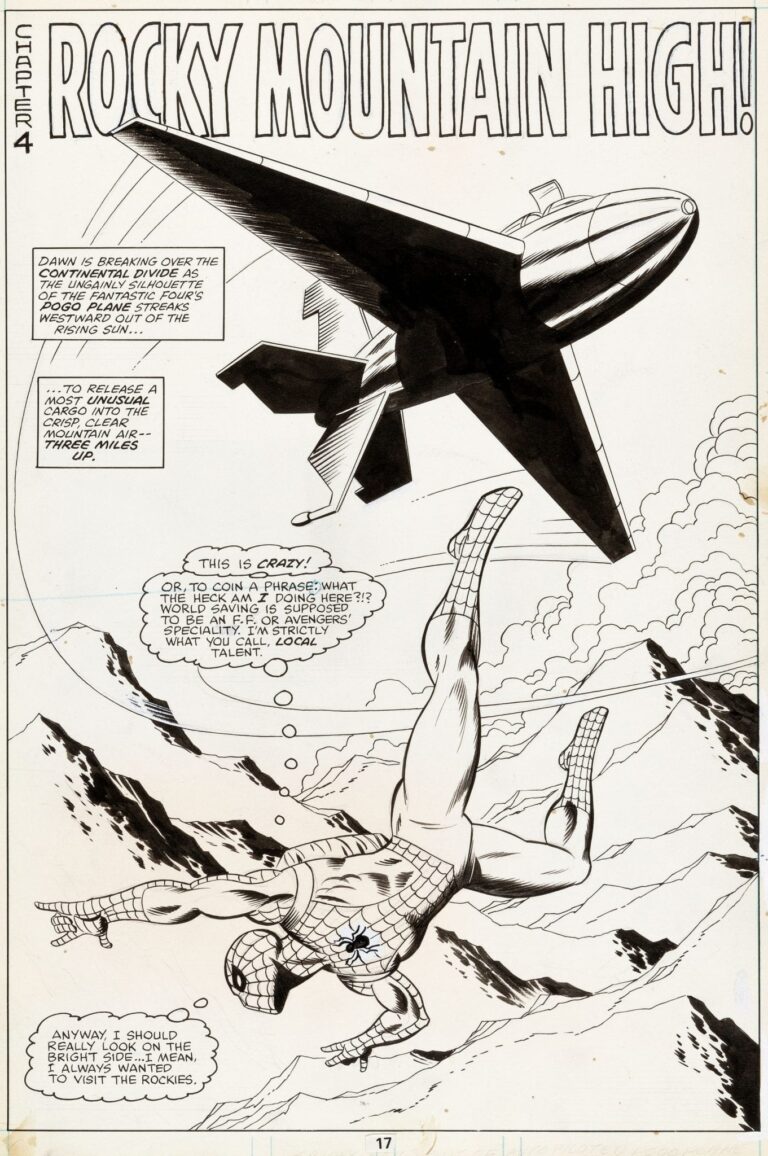