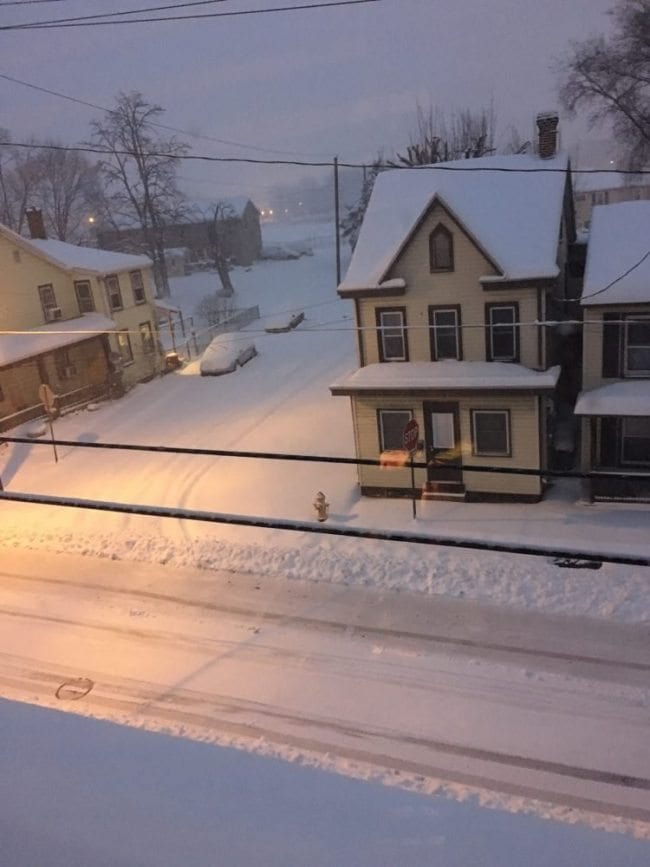 Everything is closed, but we're still open. 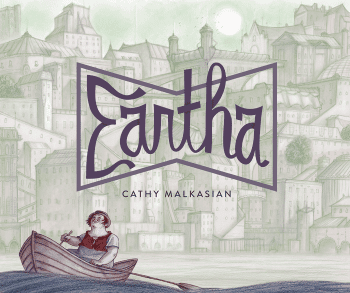 Eartha: Being the newest graphic novel by Cathy Malkasian, a longtime operator in television and feature film animation who has since carved out a strikingly assured and personal space in allegorical humane fantasy comics. The scenario involves a mystic quest to a city from where dreams emerge: "an expansive tale of pastoral life, city corruption, greed, and addictions," per Fantagraphics, which has published all four of the artist's book-format works. A 256-page two-color release, 11.5" x 9.625" in hardcover; $29.99. 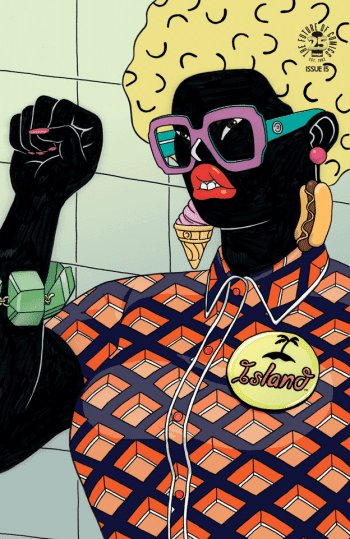 Island #15: It seems circumstances arranged themselves quickly enough that the solicitation text could not reflect it, but this is the final issue of the Image comics anthology magazine fronted by artists Brandon Graham and Emma Ríos, a forum for long-ish chunks of serial works in a primarily visually-driven SF/fantasy genre vein, with some notable delving into anthropomorphic animal drama. Or, at least *I* found it notable. I also understand that Graham himself will have some work in this one, along with Farel Dalrymple and Dilraj Mann, the latter a young artist whom I suspect found an early introduction to a wider readership through his participation in the series; $9.99.

The Metabaron Vol. 2: The Techno-Cardinal & The Transhuman (&) Siberia 56: Two French comics here in a familiar 'dark' SF vein. The Metabaron is an ongoing spinoff-of-a-spinoff sourced back to The Incal by Alejandro Jodorowsky & Moebius, now concerned with space mercenary action co-written by Jerry Frissen and drawn by various hands. The Canadian artist Niko Henrichon, recognizable from assorted DC and Marvel works, is up this time for a 112-page, 9.4" x 12.6" hardcover. Siberia 56 is a 2014-16 SF/horror series written by Christophe Bec, who's done some work for Les Humanoïdes in the past, although this Glénat series has been picked up as an early all-in-one release from Insight Comics, a new subdivision of the art book publisher Insight Editions. The artist is Alexis Sentenac, and the hardcover dimensions appear to be 8.5" x 11.2"; $29.95 (Metabaron), $24.99 (Siberia).

The Best We Could Do: An Illustrated Memoir (&) In-Between Days: A Memoir About Living With Cancer: Autobiographical comics in the bookstore-ready vein over here. The Best We Could Do is an Abrams release from Saigon-born artist Thi Bui, "[e]xploring the anguish of immigration and the lasting effects that displacement has on a child and her family," having attracted some praise from the likes of Leela Corman and Craig Thompson. A 336-page two-color hardcover. In-Between Days is from House of Anansi Press, a Canadian outfit which I haven't before associated with comics publishing. The artist, Teva Harrison, has worked extensively on the topic of living with cancer at The Walrus, and this 128-page work was apparently a finalist for a 2016 Governor General's Literary Award via the Canada Council for the Arts; $24.95 (Best), $19.95 (Days).

A Contract With God & Other Tenement Stories (&) Will Eisner: The Centennial Celebration, 1917-2017: It's a commemorative year for Eisner, as you can see, so here's a pair of items reflecting that fact. A Contract With God is a new 224-page W.W. Norton hardcover compiling various Eisner works as sourced from high-resolution scans from the original art, the centerpiece being his titular 1978 urban drama. The Centennial Celebration is a Dark Horse release - a 10" x 14", 176-page hardcover catalog for exhibitions at Le Musée de la Bande Dessinée and the NYC Society of Illustrators (through June 3rd), presented in French and English; $25.95 (Contract), $49.99 (Centennial).

2000 AD's Greatest: Celebrating 40 Years of Thrill-Power!: Meanwhile, the party continues apace for the venerable UK genre comics weekly with this 112-page themed collection, in which various contributors to the magazine from over the years select a short piece by another contributor and explain why they like it. Should be fun; $17.99.

The Legend of Zelda: Twilight Princess Vol. 1: Finally, here is VIZ with some highly-relevant video game tie-in manga. As you may know, Nintendo recently released a new title in its popular The Legend of Zelda franchise of fantasy adventures. Titled Breath of the Wild, the game draws rather extensive artistic influence from the works of animator Hayao Miyazaki -- both in terms of visual texture as well as the vaguely ecological, memento mori tone of its scenario -- while sewing together bits of game design from a wide range of recently-popular global sources (as well as its own extensive history). It is very much a magpie work, though certainly not the first time the people at Nintendo have looked to outside influence; recently, Dark Horse published an English edition of the franchise's Art & Artifacts compendium of production art, and I was very interested to find one of the primary artists, one Yusuke Nakano, alluding to the influence of "an overseas comic I was a fan of at the time" over his illustration work on the 2000 title Majora's Mask: 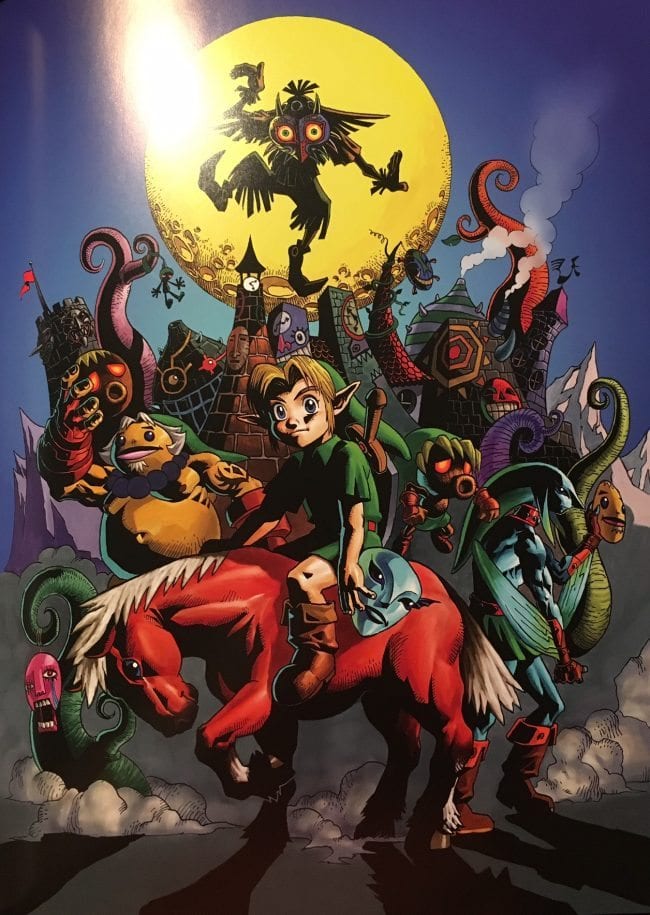 He's talking about Hellboy, right? Certainly this looks like an unusual fusion of the Zelda series' rather anime-informed design interests and the hard shadows of Mike Mignola - and imagine my surprise, then, upon reading a sidebar, to find Nakano praising the American likes of Frank Frazetta, Richard Corben(!) and Sam Kieth(!!) as artists he respects. And while Art & Artifacts does not go out of its way to clarify the identities of the people responsible for much of the art therein, further examination of the Majora's Mask section reveals some further work in a relevant vein. 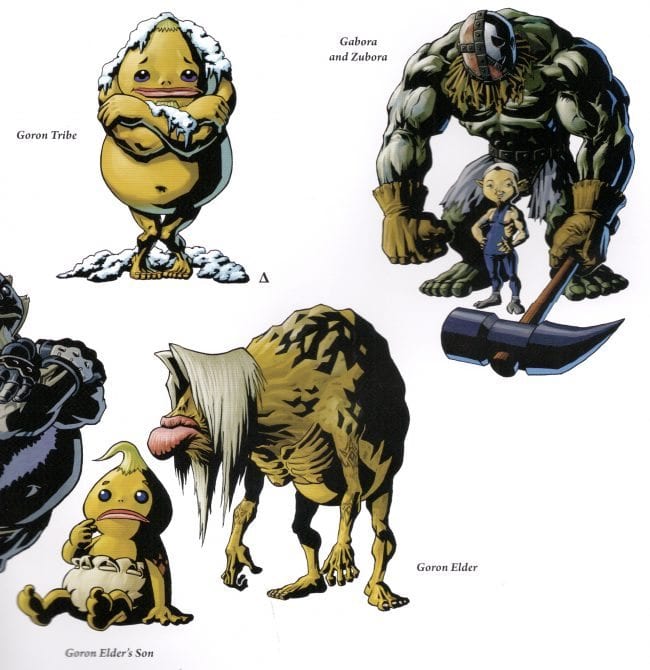 That's some Arthur Suydam shit right there! Anyway, Nakano also headed up the designs for 2006's Twilight Princess, a game redolent of a certain Tolkien calendar approach to 'realism', but this latecoming manga adaptation, begun in conjunction with a 2016 HD re-release of the game, is the work of Akira Himekawa, another longstanding figure in Zelda history - "Himekawa" is actually a pair of artists, the 'official' manga adaptation team for the franchise since the late 1990s, working in a much more distinctly (read: conservatively) commercial manga vein than the games' actual production staffs. Nonetheless, if you're hankering for more stuff, it's stuff you'll have; $9.99. 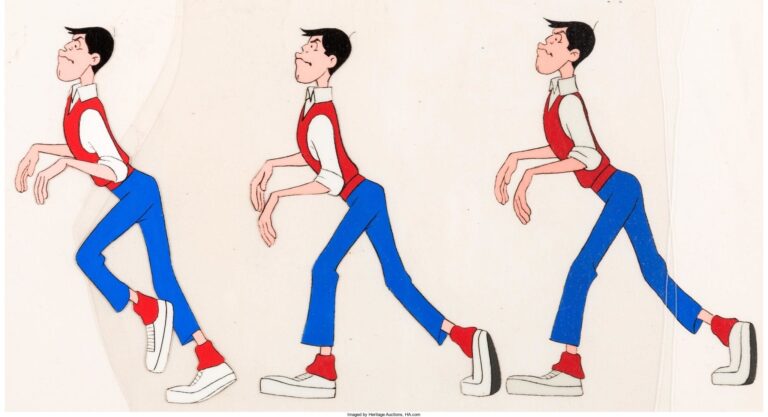