As always, Le Lézard Noir remains among France's top agents for excessive and 'alternative' manga. Having dropped three interesting releases late last year, the publisher is now anticipating the release of its ninth Suehiro Maruo compilation: New National Kid. Maruo has a tendency to revise his collections after their initial Japanese publication, but I believe some variation on National Kid was at one point home to "Planet of the Jap," the short story which, anthologized in the Blast Books compilation Comics Underground Japan, served as Maruo's introduction to many in English-reading environs.

Hey, remember this one? 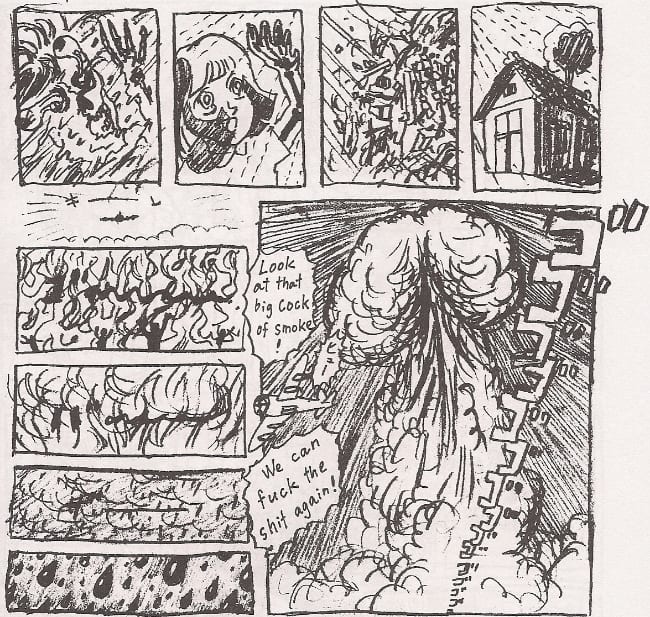 This is from Mutant Hanako, a 1998 book and the one-and-only longform manga work by renowned gallery artist Makoto Aida. A 23-page excerpt of the story appeared in a different English anthology, Viz's Secret Comics Japan from 2000.

And look at what Le Lézard has in store: 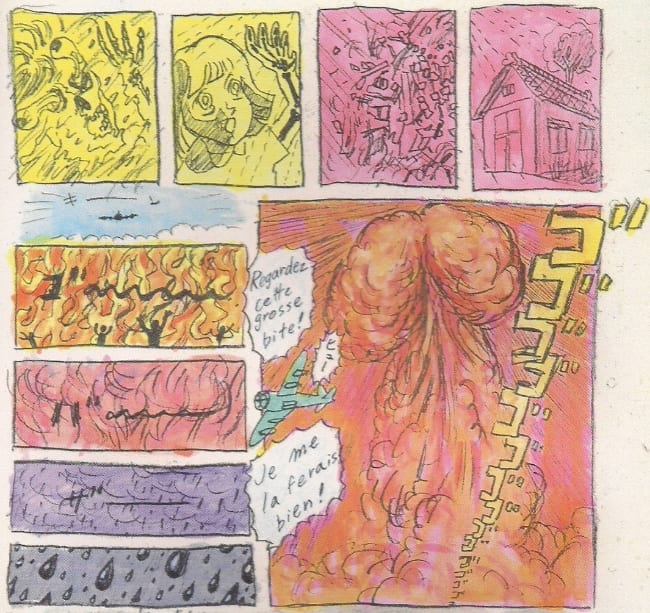 This is from 2005 - an exclusive color(!) variant on Mutant Hanako, 60 pages in length and conjoined to a 22-page survey of Aida's work in the wider arts. It's a surprising manifestation of a work initially drawn and assembled -- stapled by hand, I believe! -- and distributed to attendees of one of the artist's exhibitions. Filled with phallic imagery and vulgar violence and titillation, Mutant Hanako embodied what its creator termed "...the weapon and true essence of manga," per Secret Comics Japan editor Chikao Shiratori, translating from the afterword to a Japanese edition. 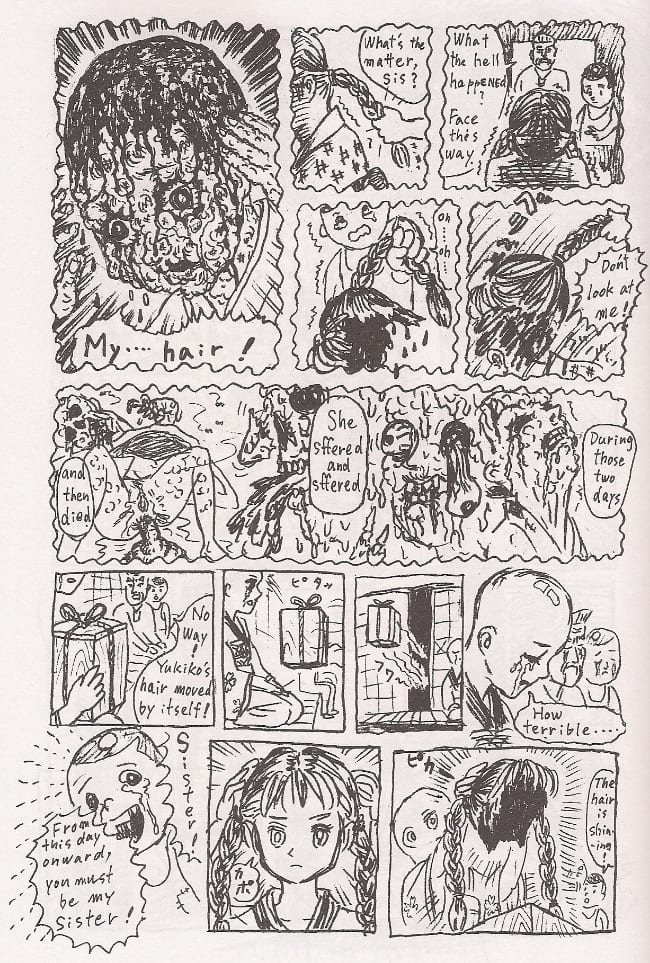 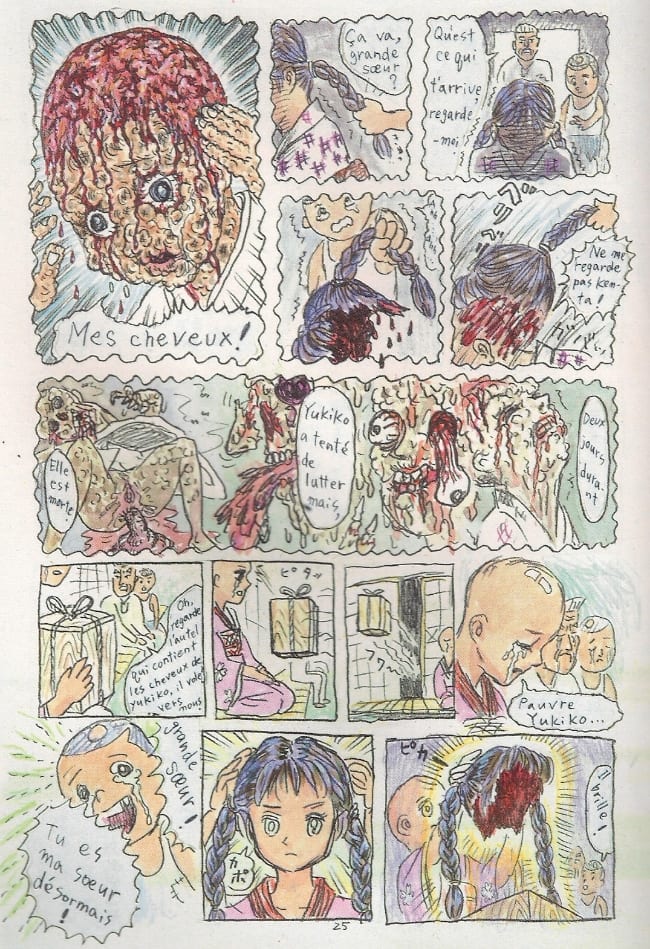 Mutant Hanako is, of course, something of a prank; it's a goof on Japanese self-pity concerning WWII, depicting American invaders as sex-crazed maniacs and literal oni, commanded by the living penis Franklin Roosevelt, who transforms into a cock-headed King Ghidorah to do battle amidst the stars. That part isn't in the Secret Comics version, though Aida nonetheless lavishes it with some attention: the English lettering is his, and the piece appears to have been edited to form a self-contained story: a distillation of the original. 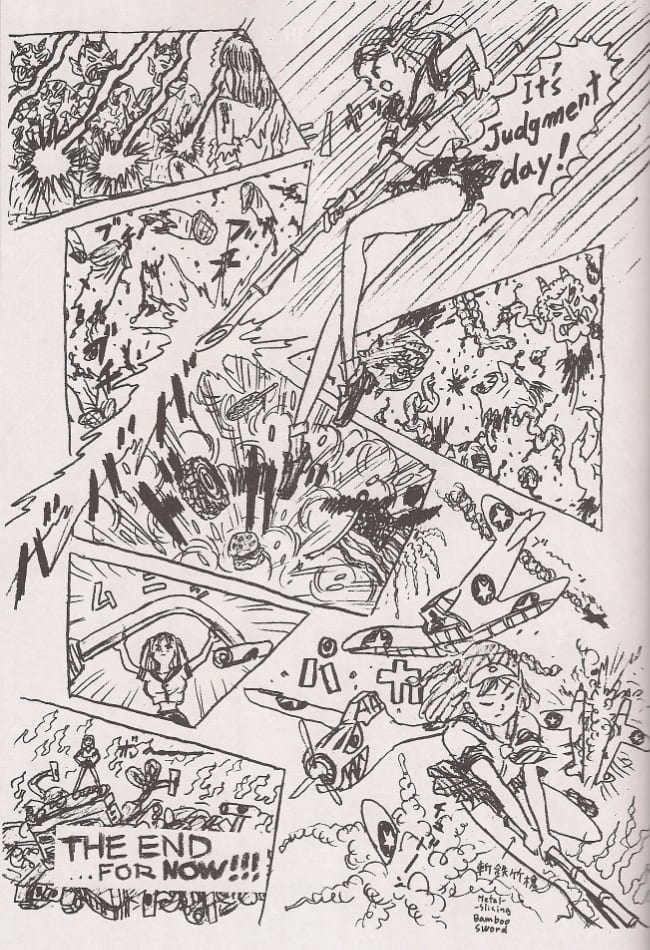 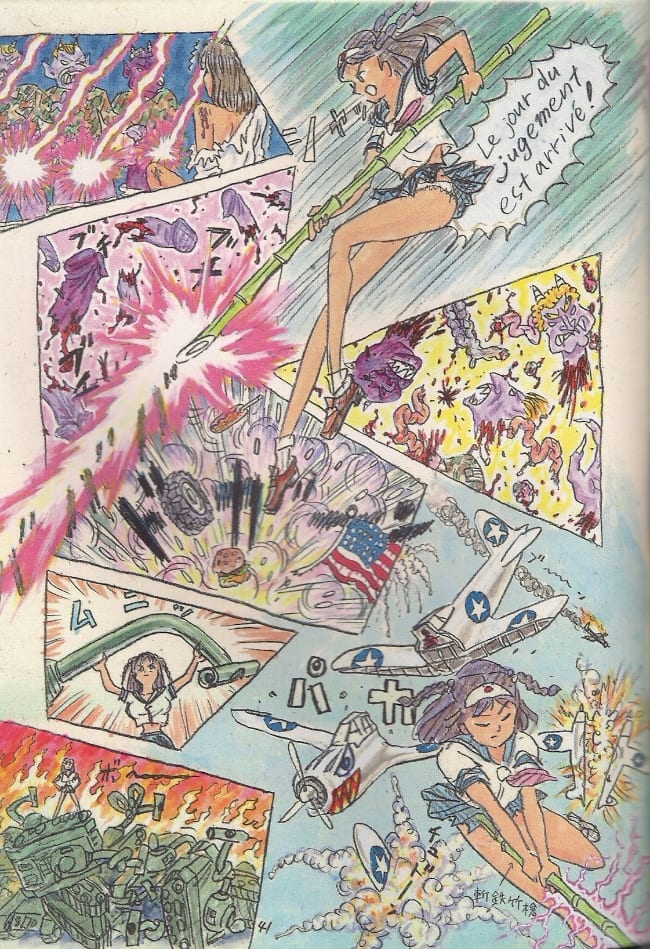 Ironically, the longer French edition (again, lettered by Aida himself) is softened a bit by the addition of color, which saps the immediacy of Aida's lines and gives everything a more considered, delicate, almost retrospective feel befitting what's basically a tiny monograph. It could be that Aida is more comfortable with that positioning; it is a mistake to assume that the joke here is entirely on his own country. Rather, Aida is just as prone to contextualizing the work, exploding hamburgers and all, as an allegorical retort to superpower hegemony and globalization, with the provincial, horny energy of manga presumably serving as a prime defense. Does it export well? If you know where to look... 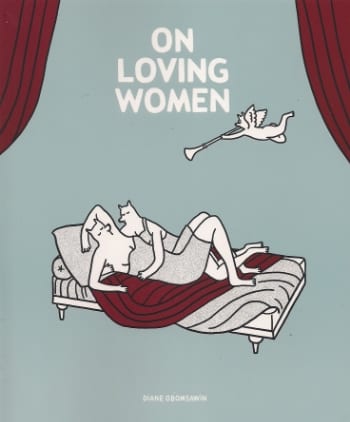 On Loving Women: Back in 2009, Drawn and Quarterly released a translation of Kaspar, a methodical variant on the story of Kaspar Hauser, a boy who claimed to have lived his early life alone in a cell. The artist was Diane Obomsawin of Quebec, and now publisher and artist return for a second English release: a 7" x 9", 88-page compendium of stories about the adolescence of lesbian women of Obomsawin's acquaintance, drawn in much the same studious, childlike manner. Preview; $16.95. 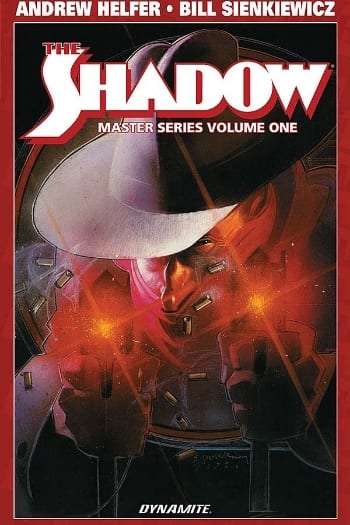 The Shadow: Master Series Vol. 1: There are few big '80s costumed action guy comics more fanatically adored by a teeny-tinier band of connoisseurs than writer Andy Helfer's 1987-89 reconfiguration of the famous radio and pulp character -- and writer/artist Howard Chaykin's immediately preceding blood & thunder comic book revival thereof -- into a sort of slapstick vehicle for violent eccentricity, particularly after Kyle Baker joined the team as regular artist. This 144-page Dynamite softcover, however, collects the series' six earliest issues, with Bill Sienkiewicz and colorist Richmond Lewis (of Batman: Year One and Rubber Blanket) providing art for a careening introductory tour of business, religion and many other period concerns, shot through with bullets and glee. Here's hoping the production values match the quality of the visuals! Note that there was also an Annual released as a side-story to this arc, drawn by Joe Orlando and inked by Alfredo Alcala, but it does not seem to be included in here, per the solicitation. Preview; $24.99.

A Connecticut Yankee in King Arthurs Court: Being the fourth adaptation of world classics by veteran graphic designer Seymour Chwast to be published in hardcover by Bloomsbury. This time it's a 144-page take on Twain - far more streamlined a source material than the artist has worked with in this manner before, compared to Dante, Homer and Chaucer; $22.00.

Magic Wind Vol. 3: Lady Charity: I've not had the chance to flip through any of these Epicenter Comics releases of late-period José Ortiz work, but he is an artist I generally like. Written by Gianfranco Manfredi, this package of white shaman adventure stuff should be 100 pages, if it's anything like prior volumes; $12.99.

Vampirella: The Essential Warren Years Vol. 1: Two José Ortiz releases in one week?! Frankly, this isn't among his more characteristic stuff; José González cast a very long shadow over the "Vampirella" strip proper - and this 452-page Dynamite horse-choker is concerned with *only* that eponymous feature, and not anything else which ran in the first 37 issues of the Warren magazine. Expect plenty of Tom Sutton too, as well as a veritable parade of writers (among them Archie Goodwin and Steve Englehart) attempting to manufacture some approximation of mythos for a jokey 'sexy girl' horror host. I personally prefer the irregular tenure of British writer Mike Butterworth (of The Trigan Empire), who treated the whole thing as dark-hearted camp, and maybe half of it can be found in here; $24.99.

No Matter How I Look at It, It's You Guys' Fault I'm Not Popular! Vol. 2: Probably nothing classically transgressive from your manga pick of the week, though there's a rueful, wounded, raw nerve comedic energy to the work of artistic duo "Nico Tanigawa" that I find interesting. It's an account of a hopeless nerd's sometimes-deluded attempts to fit in. From Yen Press; $11.99.

Perfect Nonsense: The Chaotic Comics and Goofy Games of George Carlson: Finally, in this rather small week, Fantagraphics brings a 9.25" x 12.25", 320-page hardcover survey of the career of the poet and illustrator behind Jingle Jangle Comics among other zany pursuits of the type which often wouldn't capture the eye of comic book aficionados. Biographical text and timelines will be included. Edited by Daniel Yezbick. Preview; $49.99. 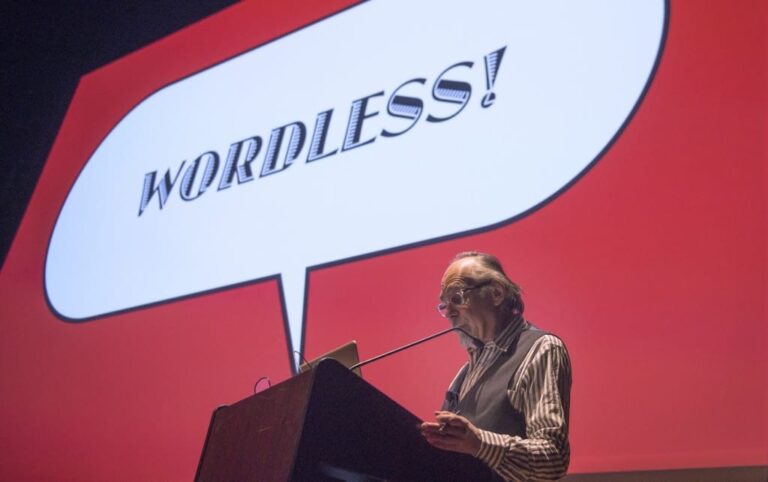 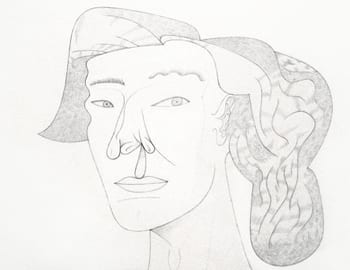