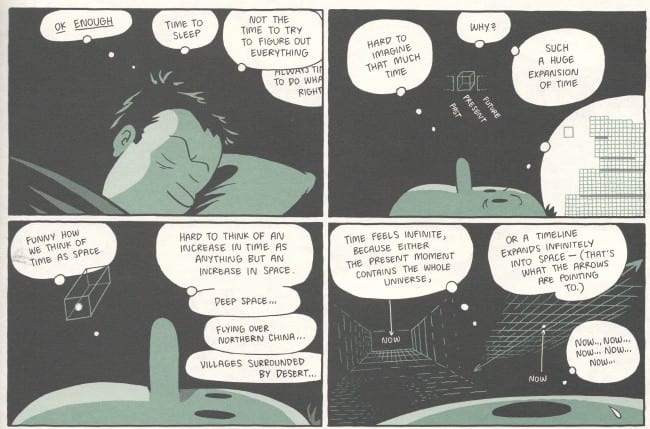 Usually in these columns, when a comic doesn't appear on Diamond's release list but nevertheless appears to be obtainable, I just hold off and wait; it rarely takes more than a week for the big distributor to come around, and thus I am spared again from acknowledging the fundamental chaos of comics availability. However, I think it's now worth pointing out a recent book of particular interest that's maybe available at your local shop, maybe not - certainly you can buy it online, if you so choose. I refer to Ganges #5, the penultimate issue of a series by Kevin Huizenga, and the sole survivor of the "Ignatz" line of magazine-sized deluxe comics from Coconino Press & Fantagraphics Books, which saw over 40 items released from the mid-'00s through the first years of the 2010s.

Ganges #5 does not come from Coconino or Fantagraphics (though the latter is handling distribution); it's self-published. Moreover, it doesn't exactly match the Ignatz format, lacking a dust jacket and that really heavy paper, and coming in slightly smaller in terms of height. Yet it openly presents itself as of the "Ignatz" collection, and it absolutely continues the story last seen in 2011, with some references going right back to 2006's issue #1 - and it's fortunate, then, that Ganges adopts a modular, displaced narrative approach, all the better for serving the series' fascination with time and perception.

Broadly, Ganges is the story of a man, Glenn Ganges, who wants to go to sleep, but cannot. But it's also about remembering days in the past and flashing forward to days in the future, about processing history through video games and capturing conflict in art, about reading books and also the recollection of having read books, and the myriad alternate realities we warp our minds into while attempting to navigate the present. In an essay I wrote for the Drawn and Quarterly 25th anniversay book -- where I think I brought a real sense of gravitas to pgs. 380-382 -- I suggested that the core of Huizenga's work is in the interaction of the conscious and subconscious; not as a latent characteristic of the comics form, but as an explicit and literal visual/narrative focus, as a means of communicating the process of ascertainment. In this way, he continues the work of Chris Ware, though Huizenga's emphasis falls less on plumbing the mindset of his characters than riding with them as they encounter the coexistence of the natural and the artificial, the superstitious and the scientific - never at Manichean odds, but observed in states of coexistence.

This latest comic pushes everything hard in the direction of self-reference, winking at the gap between issues #4 & #5 by having Wendy, Glenn's cartoonist wife, abandon a story about a man trying to go to sleep because she can't come up with an ending less obvious than 'he falls asleep.' This segues into Glenn's attempts at anticipating something grave Wendy is about to say to him, which connects backward to Glenn's hopeless failure as a studio assistant on one of Wendy's comics, which is actually Huizenga's Fight or Run (notably manifested IRL as a 2008 Buenaventura Press one-shot). Both Glenn and Wendy carry elements of the comic into their daily lives as perceptual shorthand, though by the end of the sequence, we've switched from following Glenn to following Wendy and her thought processes, though this may well be Glenn imagining what Wendy is thinking in retrospect, again from the position of trying to get to sleep.

After that, the story launches into what may be the heart of the whole series - the shock revelation of the geology book Glenn has been (recalling himself) reading since issue #1: an expansive treatment of the theories of James Hutton, and how his discernment of geologic principles were reliant on the filters of his preconceptions, built from the intellectual and social environment in which he lived, nonetheless touching upon something fundamental, shifting only gradually, as with the Earth itself - heavy work to ponder, as Glenn tries to rest, aware perhaps that the dream of sleep is itself a way of processing the world, meaning that there is no escape until death. Certainly falling off a publishing schedule didn't black him out; this is the kind of comic only Kevin Huizenga can make, so immediate and sharp it's like no time has passed at all. 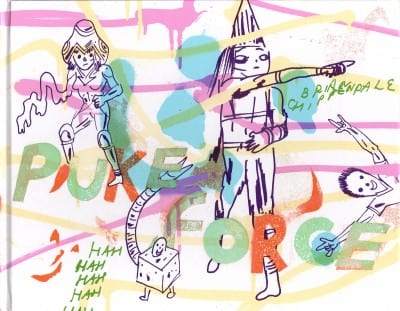 Puke Force: An extra-special conflict-of-interest warning is probably necessary for a book comprised in significant part from digital chapters posted (beginning in 2009) to the website of a publisher run by one of the editors of this column, but I think the occasion of a new book by musician and comics transformer Brian Chippendale more than warrants a high placement. A broadly satiric adventure through a craggy and stained world not entirely unlike our own, Puke Force leans into the episodic nature of webcomic postings (or Sunday strips, or alternative weeklies, if you want) by not only breaking the story up into vignettes, but presenting updated layout guides at the top of nearly every page to guide the reader through Chippendale's more-varied-than-ever pages without breaking eyesight - which also ensures the reader 'rests' between episodes, if only for a few seconds, to prepare them to enter each new vista without the preconceptions of accrued panels. Drawn and Quarterly is the publisher of this 120-page, 10.9" x 8.1" landscape hardcover. Preview; $22.95. 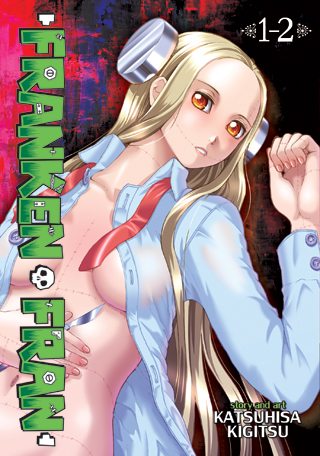 Franken Fran Vols. 1-2 (of, er, 7-8, which is to say 4): "Joe, what are you doing? Why is this up here?" Okay, you see, here's what happened - yesterday, former Journal editor Dirk Deppey tweeted a link to an article he wrote back in 2005 on the topic of scanlations, and it got me thinking about how pirate translation favorites of the time like Naoki Urasawa and Kyoko Okazaki now enjoy a degree of popular or critical success apart from the 'manga' label. And, given that, logic would suggest that certain later scanlation hits would only now be appearing in official translation, which leads me, inevitably, to this 2006-12 Katsuhisa Kigitsu project about a reanimated girl who fulfills the wishes of people she encounters via fantastically disgusting exercises in miraculous surgery, like Osamu Tezuka's Black Jack helming an episodic horror series a la Kanako Inuki's Presents or Matsuri Akino's Pet Shop of Horrors. I also hear the cover art is mostly to rope in the punters. Anyway, while I don't know if this will prove as interesting or lasting as anything else, it has undeniably been very well known to download enthusiasts for a while, and now Seven Seas brings it to print as a set of two-in-one editions - which is to say that this is one book, comprised of the first two Japanese volumes, in case you found the numbering as weird as I did; $19.99.

Dungeon Monstres Vol. 6: The Great Animator: Your Eurocomics pick of the week marks the end of the line for this 'various artists' spin-off of the popular Lewis Trondheim/Joann Sfar fantasy series. Both the past and the future manifest across two albums: 2007's "The Great Animator" features Trondheim's fellow L'Association co-founder Stanislas Barthélémy (don't think we've seen him in English since Drawn & Quarterly's release of The Adventures of Hergé nearly half a decade ago), while 2008's "The Inventor's Grimoire" presents Nicolas Keramidas, who may not have quite been at the age of majority when L'Association started up, and recently collaborated with Trondheim on an auteurist Mickey Mouse album for Glénat. NBM (which advertises on this site, as you've probably noticed) publishes the English-language softcover at 96 pages. Preview; $15.99.

Revenger Vol. 1: Children of the Damned: Oh god, and not only does Bergen Street Press sometimes advertise on this site, but I also run a podcast with one of its principals. Nonetheless, I bought and enjoyed the five original self-published comic books collected here, being artist Charles Forsman's evocation of Cold War vigilante fiction - not a spoof, but something akin to (say) a Mike Baron-scripted storyline from The Punisher, starring a seething woman out to bust up a child kidnapping ring stocked with dangerous surprises. There's also a standalone special issue out there, and a new four-issue storyline planned for release this year; $14.95.

Judge Dredd: Dead Zone: More tough people firing guns, but this time with a character legitimately dating back to the 1970s, written by its co-creator, John Wagner. Various stories from 2014 & 2015 are collected in these 90 pages -- about half drawn by Henry Flint, half by Richard Elson, I'd estimate -- showcasing both the Judge Dredd series' commitment to extremely longstanding continuity and its fondness for social parody, as various denizens of the future struggle haplessly to get by in the world (which frequent readers know has gotten even worse in recent years). A Simon & Schuster release for North American eyes; $17.99.

Tomb Raider #1 (&) Usagi Yojimbo #152: Two Dark Horse comic books here, one with a new creative team, and one that's very steady-going. Tomb Raider, derived from the video game franchise, is notable as (almost) the licensed comics debut of writer Mariko Tamaki, well-known for her collaborations with cousin Jillian Tamaki on the graphic novels Skim (2008) and This One Summer (2014). It's drawn by Phillip Sevy, a contributor to the 2014 Hic & Hoc anthology Unknown Origins & Untimely Ends who's worked at Image and other publishers. Usagi Yojimbo, of course, is the creation of Stan Sakai, still prone to dropping entirely self-contained comic book stories like this one, a tale of banditry and natural disasters and choices, based on a suggestion by Sergio Aragonés. Tomb preview, Usagi preview; $3.99 (each).

Investigating Lois Lane: Finally, your book-on-comics of the week - a 288-page Chicago Review Press softcover release from Tim Hanley, a contributor to numerous comics websites (including this one). It's a history of the prominent Superman supporting character, showcasing "her ability to always escape the gendered limitations of each era and of the superhero genre as a whole"; $18.95. 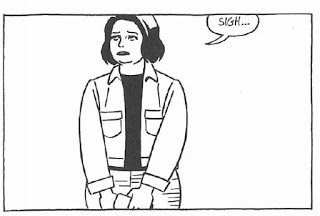