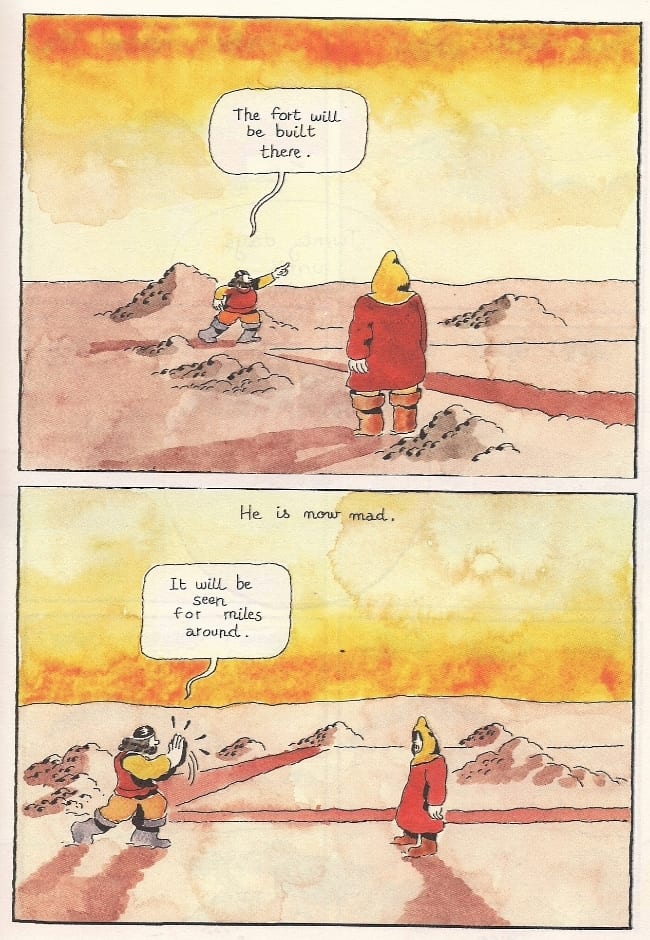 Seeing Brian Nicholson's review of Arsène Schrauwen reminds me that there was another English-original comic on the topic of exploratory colonization released by a European cartoonist last year: Mutiny Bay, by the French artist Antoine Cossé, published by London's Breakdown Press. I don't recall this book having yet been distributed to comic book stores by Diamond, so you may need to inquire at your shop or order it directly from the publisher (or, like me, find their table at an applicable festival), but it'll be a worthwhile effort.

Breakdown and Cossé have released other comics, which (like the artist's recent Retrofit release, Harold) are set in a curious shared world of celebrity, self-absorption and class violence. Mutiny Bay departs from this, focusing its plot on a fact-based historical incident, though it should not be mistaken for a plot-driven work, even to the extent that Arsène Schrauwen hangs together as a straight narrative. Rather, the circumstances surrounding the 1520 Easter mutiny of ships under the authority of Ferdinand Magellan while in search of a strait to the Spice Islands provide a sort of navigational chart by which Cossé seems to organize his flights of drawing, bobbing from character to character with none allowed to grasp the primacy of a hero's role. 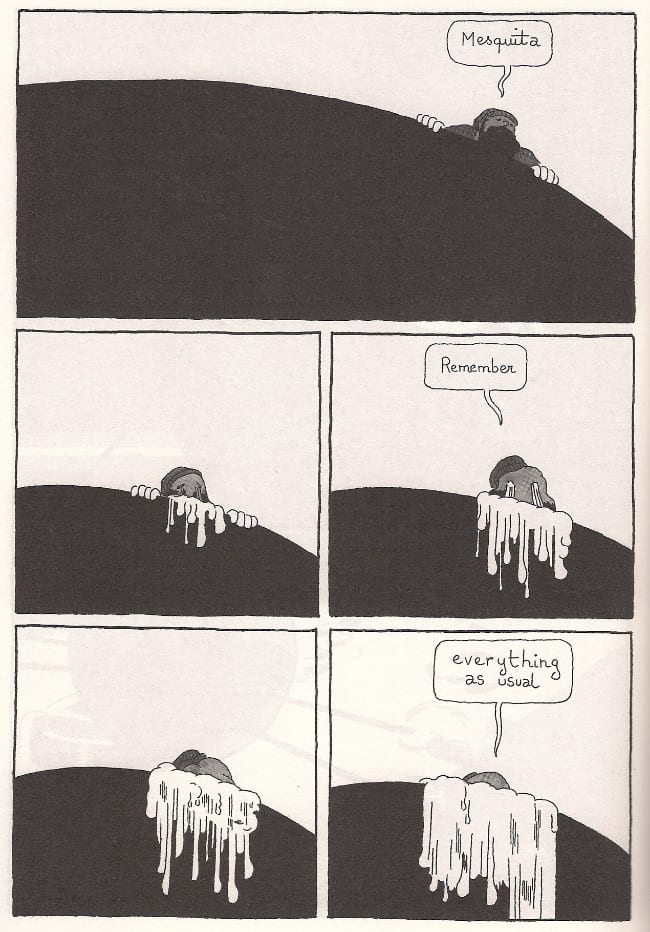 Throughout, Cossé challenges the stability of perception - we can see Magellan himself melting above, but there are also mysterious talking humps in the water, floating pregnant wives and a cannonball which transforms into the screaming head of a dead native girl. All of the characters in the book are men, and mostly what they dream of are women; this sharp duality positions colonization as a masculine, paternalistic endeavor, though Cossé's explorers are ill-equipped for such adventures. Flashbacks frequently intrude, concerning quite moments with a prostitute, or vulnerable, clumsy meetings with animal-headed royals, or a hazy and awful pursuit of a sexy young woman until she has drowned herself to escape the aggressors. This is on top of fantasy invading the 'present', though the flashbacks are presented on salmon-looking paper contra the white of 'now', suggesting a total (if temporary) usurpation of the characters' points of view. 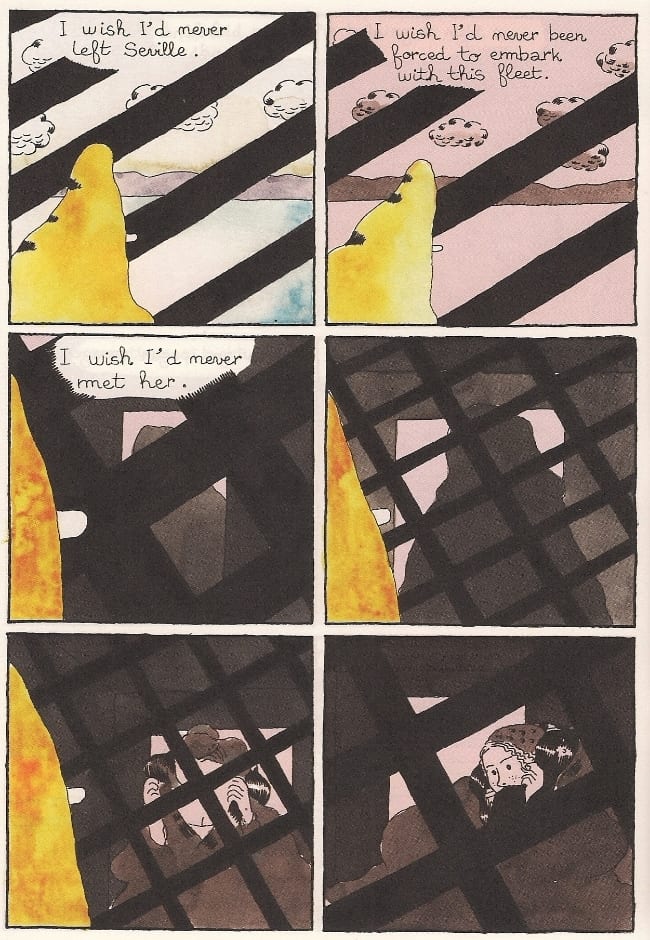 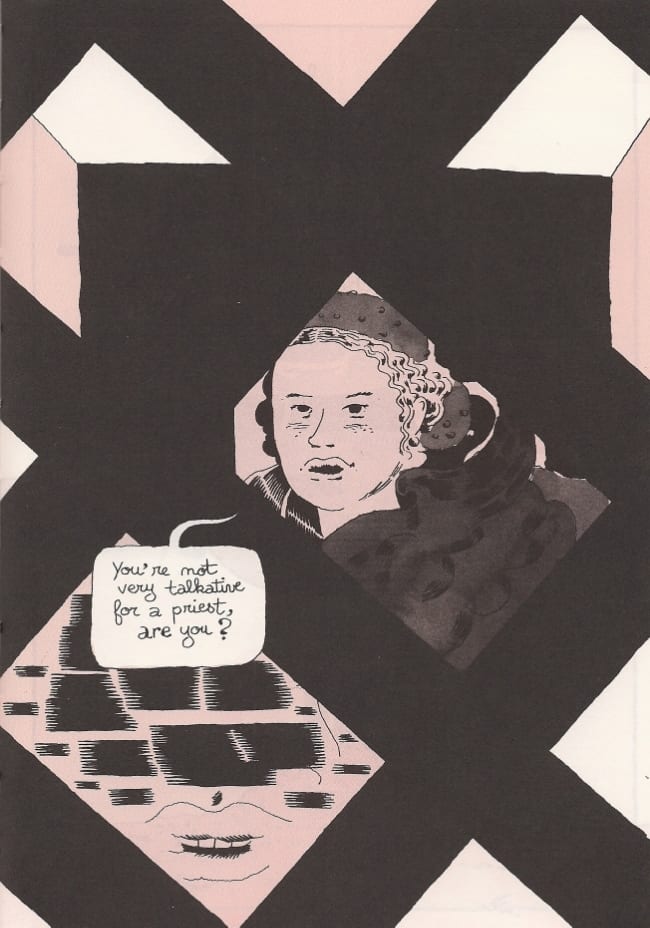 To the Fitzcarraldo of Arsène Schrauwen, Mutiny Bay is Aguirre - it is much crueler to its hapless explorers, offering them only the doom and violence of a historical mission that even Magellan himself did not live to see completed. You have noticed a good deal of color in the images above; Cossé also draws a distinction between the man-made environments of the ships, all (non-flashback) scenes from which are presented in b&w, and the authority of nature, which is painted in color. It is certainly lovelier, but the main difference is that nature is aloof, allowing the remaining men to dig in the ground and sweat with disease until they are dead instead of leaving them to the ambitions of men that will kill each other likewise.

What is similar between the man-made and natural environments that Cossé presents is that both afford us the sensation of being isolated from home and comfort and love, and our perception of what is real decaying from stability's absence. To read Mutiny Bay is feel the sensation of being small and helpless, keenly aware of the fragility of the body and the ephemeral quality of society in the adventuresome zone. And when the last surviving man -- a priest, a godly man -- suddenly finds himself back in b&w, back in civilization, it is just a foreign society: not so much dangerous as uncaring again. Without a gun, there is no reason to regard him as an agent of destiny. When framed as heroes, we know neither others nor ourselves. 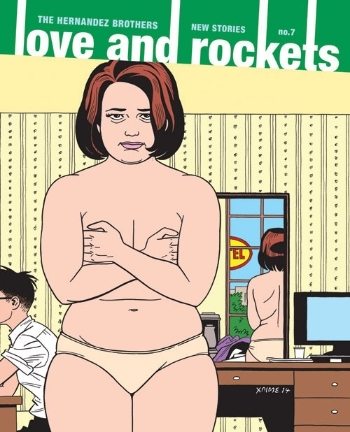 Love and Rockets: New Stories No. 7: I am under the impression that a number of comic book stores (at least toward the east of the U.S.) got this in last week, but now is the time when Diamond has formally listed it, so HERE - the next 100 pages of Jaime & Gilbert Hernandez, in the familiar 7.25" x 10.5" softcover format. Some new Maggie & Hopey stuff in here, along with Xaime's more recent character focuses, and Beto in both fantastic and interpersonal modes (not that those are mutually exclusive). Preview; $14.99. 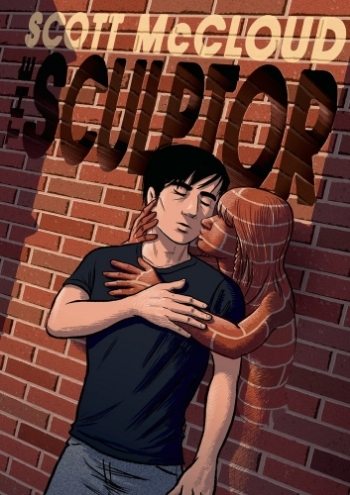 The Sculptor: YOU'VE HEARD ABOUT IT, NOW THROW YOUR BACK OUT DEALING WITH IT. This, of course, is the new graphic novel from Scott McCloud, his first book-length print fiction since The New Adventures of Abraham Lincoln in 1998, if I'm not mistaken. At a scale-tipping 496 two-color pages, there will certainly be room for numerous musings on life and creativity, as we meet an artist who's put a countdown clock on his life in exchange for the ability to form anything with his hands. A First Second hardcover about which you're guaranteed to hear more from your favorite generalist media platforms. Samples; $29.99.

Intelligent Sentient?: A new Drawn and Quarterly hardcover 'Petits Livres' release featuring wide (10.9" x 8") drawings by Luke Ramsey, who places an "anti-character" in different environments, ranging from the itchy-meticulous to the yawning and pulsing. There's also some guest drawings from Michael DeForge, Jesse Jacobs, Tommi Musturi and others. Samples; $22.95.

Displacement: A Travelogue: Being the second original autobiographical graphic novel Lucy Knisley has released with Fantagraphics in as many years, following An Age of License, which saw the artist on a European book tour. This time she's minding her grandparents on a cruise, in what the publisher deems "part graphic memoir, part travelogue, and part family history." Preview; $19.99.

Library of American Comics Essentials Vol. 6: Baron Bean, 1917: I agree with Tom Spurgeon that the LoAC Essentials line of thick, narrow hardcovers is a really intriguing way of getting some of the older, more obscure stretches of newspaper comic strip history back into print, one strip per page, and now we find the line taking on its first-ever sequel - another year of George Herriman's chronicle of a nobleman grifter, following up from LoAC Essentials Vol. 1 back in '12. A third and final installment should follow at some point in the future, although vol. 7 will be a compilation of Hal Foster's earliest Tarzan dailies. It's 11.5" x 4.2", at 328 pages; $29.99.

Avatar: The Last Airbender - The Rift Library Edition: You've probably heard the announcement that American Born Chinese/Boxers and Saints author Gene Luen Yang will be replacing longtime superhero specialist Geoff Johns as writer of the John Romita Jr.-drawn Superman in June. Naturally, eyes will turn to 2014's The Shadow Hero as a predecessor, given that it saw Yang and Sonny Liew revive a public domain superhero as a means of coaxing out the presence of Asian-American art from the early years of comic books. But know too that Yang has had experience in genuine work-for-hire licensed action comics scripting since 2012, as this successful Dark Horse cartoon tie-in series demonstrates. Collecting a three-part 2014 series finding Yang collaborating, as usual, with the Japanese art team Gurihiru, under the supervision of creators Michael Dante DiMartino & Bryan Konietzko - a 240-page, 9" x 12" hardcover. Samples; $39.99.

Transformers Vs. G.I. Joe #5 (&) Satellite Sam #11: Two continuing comic book series, both on a somewhat irregular schedule. Transformers Vs. G.I. Joe is the exceedingly unique IDW licensed series from Tom Scioli and co-writer John Barber, a flood of playful/freakesh images that register much closer to a personal bootleg minicomic than an official media crossover. I believe this issue starts its second movement. Image's Satellite Sam, meanwhile, is launching into its endgame after four months off - it's a historical mystery set in the world of live television from writer Matt Fraction and artist Howard Chaykin, set to wrap at #15. TvJoe preview; $3.99 (TvJoe), $3.50 (Sam).

Sweatshop: "DC - Sometimes We Don't Reprint Our Comics." And actually, I do think Peter Bagge's 2003 series Sweatshop was a mainline DC release, as opposed to something from under the Vertigo or Wildstorm labels. It was definitely a departure - a workplace comedy about studio assistants laboring anonymously on a shitty daily comic strip under an aged and temperamental cartoonist. Stephen DeStefano, Bill Wray, Johnny Ryan, Stephanie Gladden & Jim Blanchard also contribute art to what is now a 152-page color Fantagraphics softcover. Preview; $19.99.

Batman: Dark Knight, Dark City: What DC does reprint an awful lot is Batman, and my understanding is that Batman readers of a certain age consider this 1990 piece from Peter Milligan & Kieron Dwyer to be one of the better Riddler stories, filled with city labyrinths and occult influences and such. Also includes about half of Milligan's brief early '90s tenure as writer on Detective Comics, with art by Jim Aparo and Tom Mandrake - given that some of the later issues on that crossed over with later issues of Batman proper, I'll guess the publisher is saving them all for a subsequent book; $16.99.

Frank Thorne's Red Sonja Art Edition Vol. 2 (&) Prince Valiant Vol. 10: 1955-1956: Two large showcases for fantasy art here, both part of continuing series. The Red Sonja is from Dynamite, essentially mimicking the IDW format of reproducing original art in color at about its size of creation - although, if this preview is any indication, there seem to be a few pages for which original art was not available. Nonetheless, the subject is Frank Thorne and issues #1-6 of the Marvel series, 1977, with scripts by Roy Thomas & Claire Noto and Wendy Pini. Prince Valiant remains a Fantagraphics release, 112 color pages in a 10.25" x 14" format, presenting the work of the aforementioned (and here considerably more experienced) Hal Foster. Valiant preview; $150.00 (Sonja), $35.00 (Valiant).

Bobby and the Magic Pen (&) The Art of Jack Davis (&) Jack Davis: Some of My Good Stuff!: And finally, here is a trio of Jack Davis-related items from Binary Publications, a young publisher about which I know little. Bobby is a relatively new work - a 2012 edition only now being distributed to comic book stores, teaming Davis up with writer Joseph Pfeiffer for a 38-page color illustrated prose story on the old theme of a kid with a drawing instrument that can bring things to life. Both The Art of and Some of My Good Stuff! are reissues, the former hailing from 1987 and the latter 1990, both compiled by Hank Harrison with an eye toward presenting early and rare/unpublished works, respectively; $9.99 (Bobby), $18.95 (Art of), $15.99 (Good Stuff). 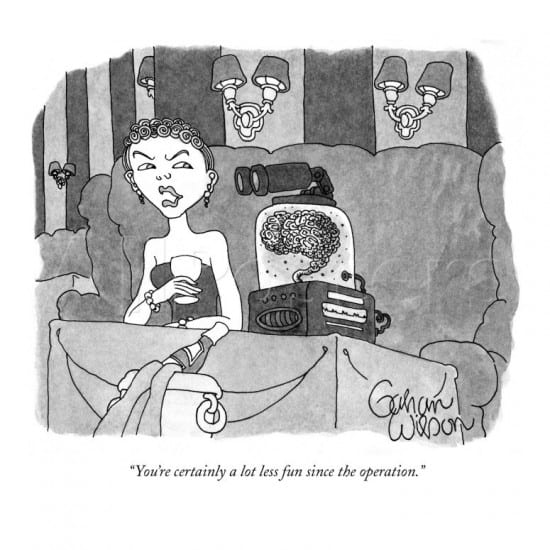 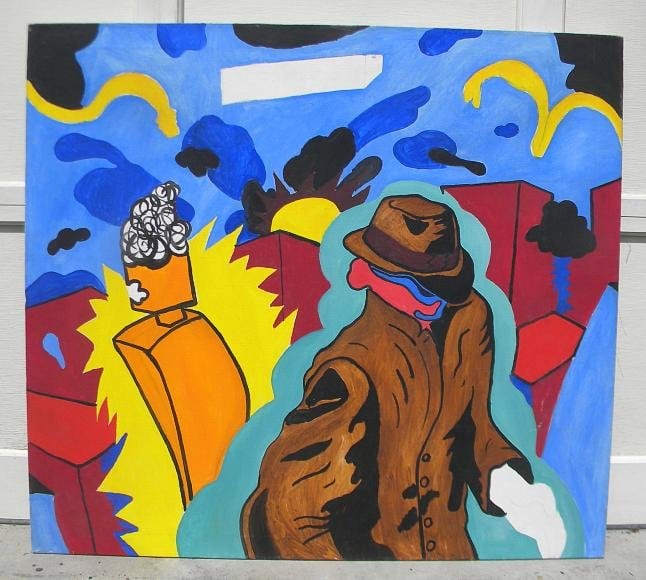