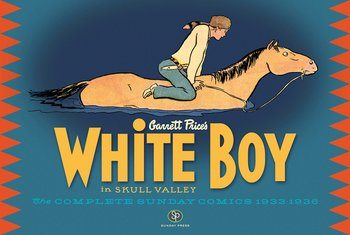 White Boy in Skull Valley: Fair warning - this isn't actually on Diamond's list this week, though I understand it may arrive in some shops. In a week bedecked with reprints and oddities, I think it's worth risking a premature spotlight on this very real, very late book-of-the-year contender - a 168 page, 16" x 11" Sunday Press Books edition of the complete Old West strip by artist Garrett Price. An obscurity during its troubled 1933-36 original run, White Boy soon became revered for its graphic sophistication and historical acuity in depicting a young outsider living among a Native American tribe. Then, in '35, it was reconfigured into a modern-day adventure strip which Coulton Waugh memorably described in his 1947 survey The Comics as "the usual melodramatic, conventional Sunday supplement stuff of masked men and battling dinosaurs high up on the lost mesa. There was more lost than the mesa." Witness everything for yourself here, with the expected supplementary texts; $75.00. 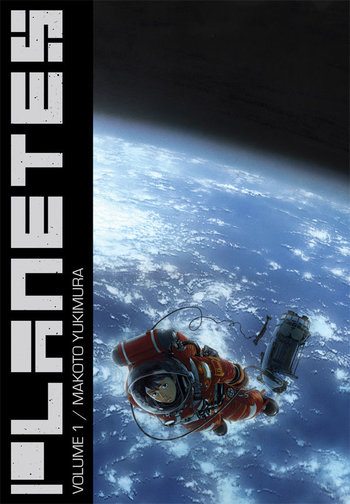 Planetes Omnibus Vol. 1 (of 2): Makoto Yukimura is maybe better known today among comics readers for his long-running viking adventure series Vinland Saga (released in English by Kodansha), but ten years ago he was a favorite of comics bloggers for this shorter SF series, focusing on the personal missions of orbital garbage collectors. It was one of the designated consensus manga, popular even among writers-on-comics who didn't fuck with the Japanese stuff all that much, maybe because it was very sedate, realistic... seinen, in the older-skewing connotation of that term. Now Dark Horse brings it all back in a pair of 500+ page books with restored color sequences, and hopefully a break placed elegantly enough that you don't quite realize how saggy the damn thing gets in the middle, if we're being honest. Lot of former comics bloggers getting saggy in the middle too. Preview; $19.99.

Snow: This is a book from artist Benjamin Rivers, who received a Xeric grant toward its completion in 2010. By that point there was already a computer game prequel; the work has since been adapted into a feature film. The artist, meanwhile, became prominent on the indie video games scene, although this has not apparently stopped his graphic novel self-publishing efforts, as a post-movie edition of Snow (glossy stills gallery included) will be distributed by Diamond to comic book stores this week. It's a "dramatic story of personal growth and change" involving a young woman in Toronto dealing with upheavals and such, and I'm highlighting it here because it's always striking when a work accumulates so much around it, essentially by itself. Official site; $12.00.

Different Ugliness, Different Madness (&) Izuna: Two from Humanoids, on opposite ends of the scale. Different Ugliness, Different Madness was a 2004 album from Les Humanoïdes' Tohu Bohu line of 'indie'-style comics, for which Philippe Dupuy and Charles Berberian had been creative directors. It's a 128-page Marc Malès story about trauma and connection in the 1930s U.S., rather swiftly translated in 2005 under the DC/Humanoids partnership and reprinted here in hardcover. Izuna, on the other hand, is a big, lush Japanese-inflected ongoing mythic fantasy story from artist Carita Lupattelli, working with writers Saverio Tenuta & Bruno Letizia. Very new component volumes, from 2014 & 2015, in this 104-page hardcover; $19.95 (Different), $29.95 (Izuna).

Walking Wounded: Uncut Stories from Iraq: Your 'mainstream comics' Euro pick of the week, a 2013 album following up on the 2010 documentary feature On the Bridge, in which filmmaker Olivier Morel follows American Iraq War veterans as they cope with trauma upon their return from service. The comic is drawn by Martin "Maël" Leclerc, and purportedly focuses more on Morel's personal interactions with the subjects. A 120-page hardcover, published at 7.5" x 10.5". Preview; $24.99.

Night and the Enemy: Dover has a pair of illustrated novels out this week from comics talents -- Eric Shanower's The Giant Garden of Oz and Max Allan Collins' A Killing in Comics (with Terry Beatty) -- but the only formal 'comic' I see is this 1987 Comico release, comprised of Ken Steacy adaptations of Harlan Ellison short stories set in a shared world of interstellar war. Some of the pieces originated in Epic Illustrated, though numerous revisions were made for their collection. Dover's 96-page iteration promises some unseen art, along with new introductions by both principals, and an illustrated prose story previously exclusive to a Graphitti Designs limited edition; $12.95.

Prison School Vol. 2: On one hand, obviously, this Akira Hiramoto adult comedy series is ecchi to the core, following the travails of awkward boys who've gotten themselves confined to a secret jail inside a prestigious and almost-entirely girl-populated academy, wherein they alternately plot to escape and lay back to enjoy the pleasures of punishment and domination by their eccentric student guards. It's a comic for guys who're mostly into the idea of being pummeled by women because hey - at least they're touching me, right? That said, there is soft heart beating beneath all of this prurient business; you get the impression that the artist genuinely likes all of these characters, and thus portrays everyone as less mean-spirited competitors than variably conscious exhibitionists feeling each other out, like horny teens sometimes do. Add Hiramoto's facility with dropping complications into the mix, and it's no surprise this series has spawned both animated *and* live-action television adaptations so far. Vol. 19 was just released in Japan last week, though be aware that Yen Press is translating two Japanese volumes inside each English release; $20.00.

The Smurfs: Monsters: Unless I'm missing something, this 2014 album represents the most recent Smurfs material brought to English. Note, however, that the work does not originate with the 'main' line of Peyo studio works, but an ongoing side-series titled L'Univers des Schtroumpfs, which launched in '11 to coincide with the first of the franchise's CG animated movies. NBM/Papercutz publishes these 48 pages of themed short stories, which comprise the fourth of six otherwise untranslated volumes; $5.99 ($10.99 in hardcover).

The Complete Voodoo Vol. 1 (of 3): Ahh, the Iger Shop! For as long as I have loved the world of pre-Code horror comics, the S.M. Iger Studio -- formerly the Eisner and Iger Studio -- has proven itself the most reliable purveyor of sinister rotgut: gone-to-seed house-styled shorts put together on a veritable assembly line and charged with a nihilism born of utter despair at the futility of human exchange. Or, I dunno, maybe I just read the good ones. This 208-page IDW hardcover begins a comprehensive reprint for Voodoo, a 1952-55 product of Farrell Publications, one of the Iger Shop's prime accounts at that time. Of particular note among the contributors are editor/writer Ruth Roche, a partner in the Iger enterprise and one of very few women creatively active on the pre-Code horror scene, and artist Matt Baker, perhaps the most popular and prominent black cartoonist of the U.S. comic book Golden Age; $29.99.

Flinch Vol. 1: But horror anthology comics didn't end in the mid-'50s, as evidenced by this very prominent 1999-2001 Vertigo series, which stacked up as many major names as possible and told 'em to be scary. Can Jim Lee be scary? Find out in this softcover compilation of the first eight issues. Artists include Frank Quitely, Richard Corben, Ho Che Anderson, James Romberger, Patrick McEown and Marc Hempel, with stories by Jim Woodring, Garth Ennis, Joe R. Lansdale, William Messner-Loebs, Bruce Jones and Dean Motter, among many others; $16.99.

The Sandman - Gallery Edition: Finally, here is one of those original art showcase books, now from DC and inevitably turned toward the quintessential '90s Suggested for Mature Readers comic. A 272-page, 13" x 20" hardcover containing some full stories but mostly a lot of art by Sam Kieth & Mike Dringenberg, P. Craig Russell, Charles Vess, Jeffrey Jones and others. Written by Neil Gaiman; $175.00. 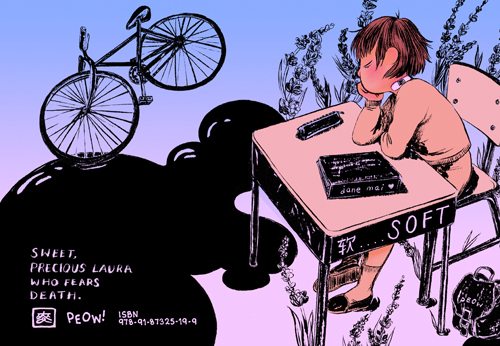 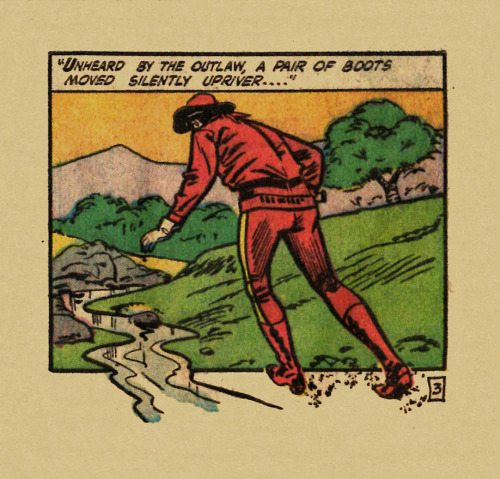