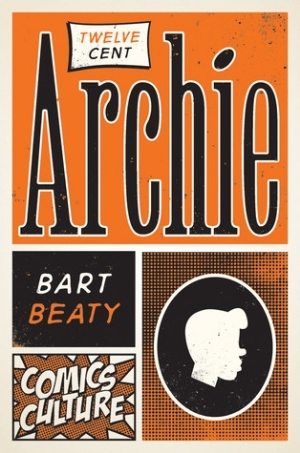 Twelve-Cent Archie: For those of us who can't help but try and read the entirety of an artist's output when composing a 2,000-word overview, I prospectively and unilaterally dedicate this great-looking new book from critic and translator (and longtime Journal contributor) Bart Beaty, stepping outside his European comics comfort zone to report what he found after plowing through virtually every Archie comic released between 1961 and 1969: just under 1,000 comic books. A total of 100 chapters are presented, with titles like "Betty = Veronica", "Samm Schwartz’s Art", "Juvenile Delinquency" and "How Well Does Archie Speak French?" (so, not *that* much of a departure), all of which I imagine were at one point written on his office walls with lots of arrows. A 234-page presentation of Rutgers University Press; $26.95. 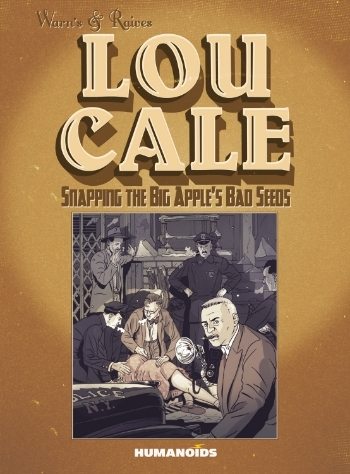 Lou Cale: Snapping the Big Apple's Bad Seeds: The world of mainline bande dessinée is not unfamiliar with artists pursuing contemporary and historical topics in a sophisticated cartoon-realist vein, although these aren't necessarily the works which easily find their way to English translation. For example, while I can think of some stuff appearing in the pages of Heavy Metal decades ago, I do believe this is the first longform North American release for Warn's & Raives, aka writer Éric Warnauts and colorist Guy Servais, both of whom contribute drawings to their collaborative albums. Specifically, this is a 1987-92 series about a crime photographer in 1940s NYC who investigates the cases he's sold to the papers - I would expect some quintessential genre-comics-for-adults here, of a vintage not easily found on contemporary shelves. A 7.9" x 10.8" all-in-one hardcover, 244 pages. Samples; $34.95.

Saint Cole: Being the new graphic novel from Noah Van Sciver, artist of many works for various publishers, most pertinently 2012's The Hypo, his prior book with Fantagraphics (which otherwise has a ton of reprints out this week, including new editions for Ghost World and various Prison Pit and Love and Rockets volumes). This one is a contemporary story of the everyday, finding a twentysomething alcoholic trying to cope with the presence of his girlfriend's addict mother on top of a new child and economic worries and everything else. It's 116 pages, in softcover. A print edition of the artist's comedic webcomic Fante Bukowski should be due from the same publisher later this year. Preview; $19.99.

Eye of Newt: This is a new collection for one of those Dark Horse comics I never hear anyone discuss, even though writer/artist Michael Hague is a well-traveled illustrator working in a high-fantasy storybook vein which I'm sure will be of some appeal to admirers of really heavy, painterly stuff, with every inch of most pages lathered with color and decoration, and rather copious descriptive text. What little I've seen feels like a comic from decades ago, around the time of Epic Illustrated or the '80s wave of 'graphic novels' from genre comics publishers. Anyway, now this too is a collected work, an 8" x 11" hardcover at 112 pages; $17.99.

Casanova: Acedia #1 (&) Effigy #1: Two big comic book debuts this week, one from the 'new Vertigo' and another from the old one. There were, of course, comics written by Matt Fraction prior to Casanova in 2006, but for many it was that extravagant, ultra-compressed here's-what-I'm-into SF spy series which marked the instance where he became "Matt Fraction", and it makes extraordinary sense for the series to return to Image now that Fraction is among the talents who've given the publisher its present renown. Artists Fábio Moon & Gabriel Bá also return, the former on the main story and latter on a backup in collaboration with Pulitzer Prize-winner Michael Chabon - and gosh, if that doesn't speak to the attention these comics command...! Effigy, meanwhile, is a new Vertigo mystery/horror/celebrity culture project from writer Tim Seeley, who's done horror-themed series like Hack/Slash in the past, though much of his visibility now seems to derive from Batman family works like the popular Grayson. I mention it for the presence of artist Marley Zarcone, whose work recalls the upfront, super-clean approaches of Jamie McKelvie and Marian Churchland a bit more than the (stereotypical) earth-toned expectations from the Vertigo line. It looks a bit more... Image. Casanova preview, Effigy preview; $3.99 (Casanova), $2.99 (Effigy).

The Multiversity Guidebook: There's no formal issue of writer Grant Morrison's maximal superhero inquiry this month, but because there's no sense in good concept work going to waste, feel free to gorge yourself on 80 pages(!) of Morrison's notes and narrations re: the DC multiverse, with visual designs by Rian Hughes and contributions from many of the series' artists, along with Klaus Janson, Dan Jurgens and others. A collaboration with Jim Lee & Scott Williams will follow in February; $7.99.

XIII Vol. 19: The Day of the Mayflower: Cinebook is dropping one of its characteristic stacks of Eurocomics this week, with every book either part of a continuing series or somehow tied to something else, but if I was to highlight only one it'd have to be this, an English edition of the 2011 continuation of the hugely popular Jean Van Hamme/William Vance suspense series, operating for the first time without the original creators. Now the writer is Yves Sente (an expert at this sort of activity, having scripted latter-day albums for Blake and Mortimer and Thorgal alongside original projects with François Boucq and Thorgal co-creator Grzegorz Rosinski), and the artist is Youri Jigounov (some of whose work with writers Pascal Renard and "Mythic" on the espionage series Alpha has also been translated by Cinebook). The duo's fourth album in the 'main' series was released in French this past November; $11.95.

Magic Wind Vol. 6: Son of the Snake: And then! Over to Italy! Epicenter Comics is still releasing episodes from creator Gianfranco Manfredi's supernatural western series, illustrated in this instance by Giuseppe Barbati & Bruno Ramella. It's 100 pages in softcover; $12.99.

Eerie Archives Vol. 18: One of the odder qualities of Dark Horse's improbably long-lived line of Warren magazine hardcovers is that Creepy and Eerie themselves hung around long enough to develop a tendency to reprint older stories within their own confines, so that a comprehensive reprint program will inevitably result in a good deal of repeated material - especially if you've already bought the publisher's (excellent) Creepy Presents: Richard Corben collection from 2012, which lessens the utility of reprinting an all-Corben reprint issue like Eerie #86 even more. Nonetheless, that and the subsequent three issues of the aging horror institution are presented here, along with a new interview with Corben and José Villarrubia. You'll also get José Ortiz, Leopoldo Sánchez, Gonzalo Mayo and Dick Giordano (among others), as well as a pretty intense Jim Stenstrum/Alex Niño piece (which, in keeping with the theme here, is separately available in the Eerie Presents: Hunter hardcover, also from 2012). Samples; $49.99.

Sláine: The Brutania Chronicles Vol. 1 (&) Strontium Dog: The Life and Death Of Johnny Alpha Vol. 2: Dogs Of War: Two new imports from Rebellion, both concerning founding fathers of 2000 AD. The Sláine is a 112-page hardcover, with co-creator Pat Mills presenting his Celtic barbarian's most recent exploits: the start of a new multi-part saga with accomplished painter Simon Davis. Strontium Dog is similarly new, with John Wagner & Carlos Ezquerra now deep into an urban warfare rendition of their mutant bounty hunter creation, a rather serious and pitiless storyline full of bloody mayhem and existential threats; $27.99 (Sláine), $24.99.

The Art of Big O: Finally, your not-a-comic of the week is this fancy-looking Big Vision Publishing release, a 9" x 11", 274-page overview of various talents associated with London poster art and fantasy illustration in the '60s & '70s; chapters are dedicated to Virgil Finlay, H.R. Giger, Roger Dean (who writes the foreword) and several others. Text by Nigel Suckling, concept/design by Michael Fishel; $89.95. 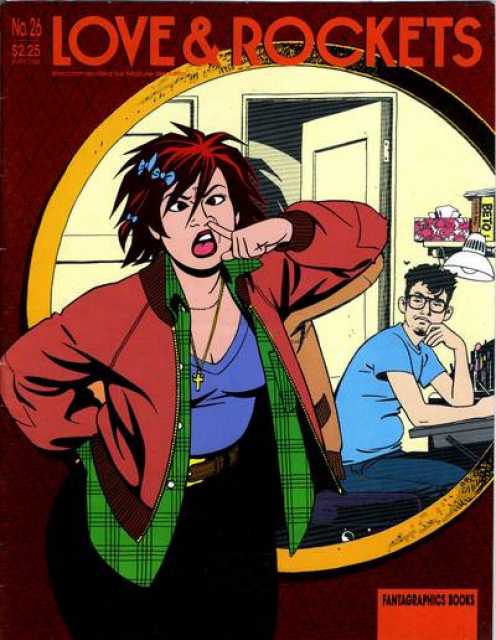