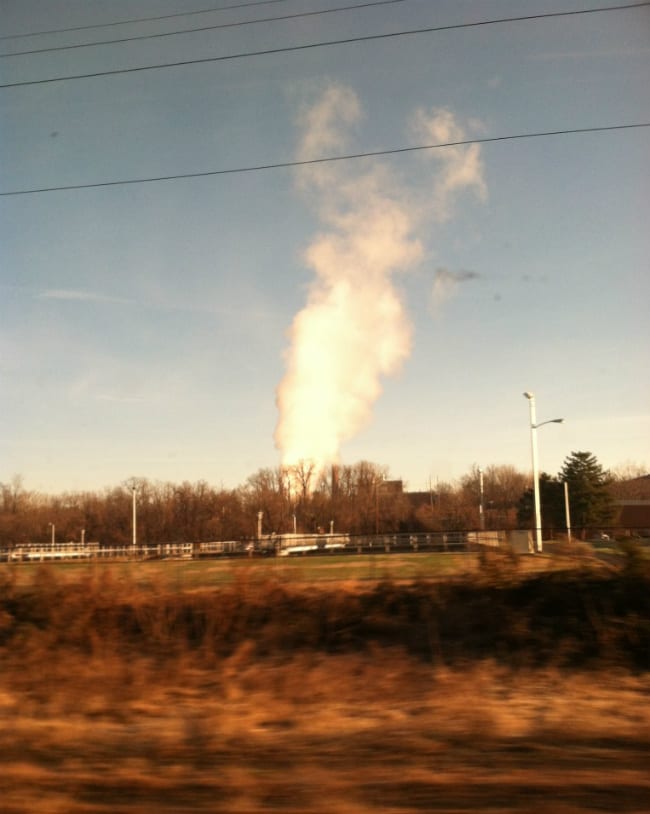 Good morning or whatever time it is. We're smack in the middle of that odd space between holidays where lots of people are still on vacation (or in vacation mode) and unlikely to be browsing the comics internet, so here's a photo I snapped through the window of a train earlier this month. I deem it highly symbolic and comics-relevant on many levels, and possibly an exclusive preview for Watchmen Begins. Excuse me while those valuable year-end hits start rolling in, even as I'm still typing! 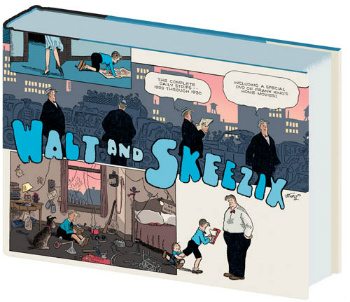 Walt and Skeezix: Book Five - 1929-1930: Being the long-awaited 400-page continuation of publisher Drawn and Quarterly's Frank King reprint cum public edification project, now boldly seeking to smash its copious supplementary materials out from the confines of print and into an accompanying dvd showcase for the artist's home movies circa the 1920s. Of course, a huge fucking stack of comics is due as well. Looks good, worth a peek. Granted, your local retailer probably won't let you 'flip' through the dvd on the rack, but maybe he's tired of screening those same episodes of Boris Karloff's The Veil... you never know. Print sample, movie sample; $39.95. 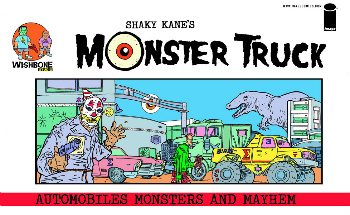 Shaky Kane's Monster Truck: And speaking of boundary-stretchers, here's a newly recolored and physically larger Image revamp of a 2007 Wishbone Studio release from an olde tyme Comics Comics favorite, a series of 52 continuous, sparsely-narrated images laid out as a single gaze down a road traversed by the titular vehicle, a scheme that will doubtlessly remind some readers of another '07 arrival, Helge Reumann's & Xavier Robel's completely awesome Elvis Road. This, however, will be pure Shaky Kane, next due to be seen in all-new form via a sequel to his and David Hine's The Bulletproof Coffin. Preview; $14.99.

La Luz De Jesus 25: A 320-page Last Gasp hardcover companion to a group show commemorating the 25th anniversary of the titular LA gallery. Notable here for the participation of many a comics veteran, including Robert Williams, Gary Panter, Joe Coleman, Dave Cooper and others, with images and reflections by the participants; $40.00.

Broadcast: The TV Doodles of Henry Flint: Meanwhile, AAM/Markosia brings your first of two import selections - a 100-page compilation of self-described "doodles" by one of the popular 2000 AD mainstays of the past fifteen years, whom I (naturally, being from the U.S.) first encountered through DC's 2006-07 Omega Men revamp; I'd picked it up blindly, solely on the basis of how completely damn odd it looked while still functioning quite nicely in terms of trashy action comic beats. Flint more recently did some Fear Itself tie-in work at Marvel, though his 2kAD output has been more extensive, including several stretches of Judge Dredd and steady work Zombo, a popular zombie comedy serial he created with Al Ewing (a clever writer who made what I believe was his North American comics debut earlier this month in issue #7 of Jennifer Blood, one of Garth Ennis' Dynamite creations). This project, in contrast to all that, is forum for nearly 'automatic' drawings, unconcerned with technique and augmented with texts by Cy Dethan extrapolating upon or reacting to the images; $19.99.

(Apropos of nothing, I only recently started following Judge Dredd as a continuing serial, and... I don't think it exists for a lot of North American readers as much more than an abstraction, you know? The general idea of Judge Dredd, solidified a little by a few standalone pieces read here and there. That's how it was for me, but... new Judge Dredd? It's kind of turned into Cerebus with gunshots and explosions in place of scripture, where the title character's grown physically old and attached to all of these longstanding political maneuvers and past actions, trudging through these long, almost anecdotal storyline clusters poured into a unifying mold - the recent Tour of Duty opus was well over 500 pages long, and the present Day of Chaos seems gunning for a similar sprawl. Except - Judge Dredd is still a mainstream, publisher-owned commercial comic, so there's rotating art crews and spin-off stories not written by John Wagner and a dogged reliance on the sci-fi action comic idiom - it's a Cerebus that's still a bit like the first phonebook, and also a bit like the Conan comics it'd ape, yet still noticeably... evolved. Strange sensation.)

Black Hawk: Dredd also famously sat out the first issue of 2000 AD, where one of the launch serials was this wonderful thing titled Invasion! Pat Mills was the originating writer, but most of the early stuff was scripted by British girls' comics and commando funnies mainstay Gerry Finley-Day, who worked in this magnificent tone of total screeching mania; it's ostensibly an alternate history thing about a (thinly-veiled) Russian conquest of England, but almost every episode actually revolved single-mindedly around this salt-of-the-earth working class guy murdering scores of occupation forces in retribution for the murder of his wife and children. I mean, the guy is clearly utterly insane, but that's the appeal - we LEER into his wild eyes as he charges into a variety of scenarios with his pump-action shotgun - shootings at a stadium! Shootings at sea! Shootings on motorcycles! Shootings at the airport, guided missiles and runaway buses! At times it's like Kazuo Umezu doing a Garth Ennis comic; not a trace of irony or sophistication stands in the way of conveying the absolute pleasure of killing people at as fast a pace as conceivable, with a thick glob of patriotic wartime gusto smeared on every chapter, possibly as cover for the glaring lack of any socially redeeming value in this children's comic. It's so wonderful! I'd have died if I had this shit as a kid!

(Fuck - sticking with Garth Ennis, you know how his comics constantly position some uncertain, easily-swayed thoughtful young man in the shadow of an older, more dangerous, amoral, violent man's man type of figure? The younger man is always Garth Ennis -- child of commando comics and 2000 AD and all the studied implications of their populist texts -- and the older man is, to generalize, BILL FUCKING SAVAGE, HERO OF THE VOLGAN INVASION, and all he blissfully represents.)

(And that's to say nothing of co-creator Mills, who revived the series as a serious political thriller in the mid-'00s, still going today.)

Anyway, Black Hawk is a serial about an African warrior in the days of the Roman empire that Finley-Day originated for Action, a '76 predecessor anthology to 2000 AD and no stranger to violent content; it eventually appeared in the odds 'n ends publication Tornado before getting moved to 2000 AD in '79 with a sci-fi concept and different writers. Here's hoping this 288-page Rebellion compilation -- your second import choice this week -- carries some of that special energy; $24.99.

Chase: Speaking of comprehensive bricks, here's a new 362-page collection of a well-regarded, none-too-well-selling 1998 DC series fronted by D. Curtis Johnson, J.H. Williams III and inker Mick Gray, a government-operative-monitoring-superheroes scenario that seemed to drop just a few years shy of many popular special ops/espionage-themed super-books. It's getting released now due to the title operative's participation in Williams' Batwoman series, and it indeed was the place where Williams' visual style began to rapidly expand into decorative and design-intuitive directions; $29.99.

An Anthology of Graphic Fiction, Cartoons, and True Stories Vol. 2: I don't usually cover re-releases or new editions in here, but this 400-page Ivan Brunetti-edited comics anthology from 2008 is now apparently under ten bucks, which is crazy enough to post; $9.99.

Gantz Vol. 20: Longtime Dark Horse devotees of a different stripe might go for Oh My Goddess! vol. 40 this week, but I'll cite this Hiroya Oku decadent action thingy since this particular volume marks one of the series' occasional major turning points, necessitating a shift in the cover colors from blue to white beginning in vol. 21 (note too that vol. 33 is set to hit Japan in a few weeks). Preview; $12.99.

Gødland #35: However, any issue of this Joe Casey/Tom Scioli Image series deserves mention, as it is highly irregular and nearing completion; $2.99.

Hergé, Son of Tintin: Finally, your book-on-comics for the week, a 424-page Johns Hopkins University Press English-language edition of a 2002 profile of the Tintin creator by Benoît Peeters, an expert on the series and an accomplished comics writer himself, often in collaboration with François Schuiten and often out of print in English, damn the world and damn its holidays, damn it damn it all; $29.95. 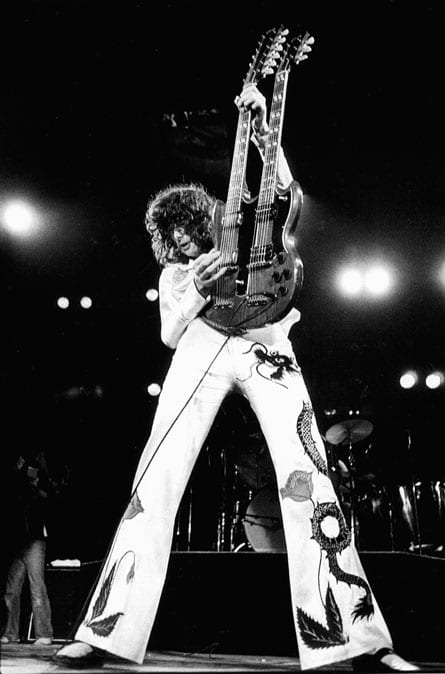