Hey, you know what takes up a lot of time? Moving.

You know what's hard to move? A Hoarders-tier comics library.

Uhh, don't forget that White Boy will probably show up this week at your shop, if it didn't show last week.

Hey, maybe I can just run this half of the column by plucking something out of a moving box for the new year!

Yeah. I should monetize every circumstance in my life. 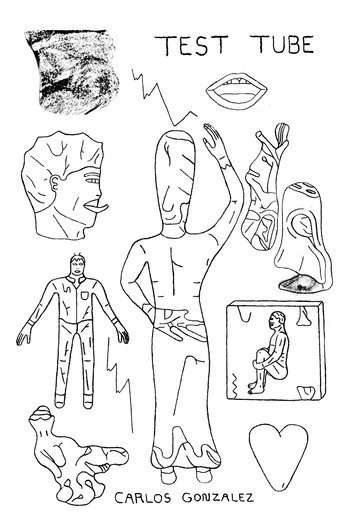 Test Tube: Anya Davidson reviewed this one yesterday; my understanding is that it's the first externally-published longform comics release from Carlos Gonzalez: musician, video artist and prolific zine-maker. A 144-page Floating World production (Diamond distro by Alternative Comics), the book collects a 2012-13 series positing "a solid, real-world foundation from which the artist can depart to test the boundaries of science fiction," per Davidson. Lots of linked marks on these pages, bordering one another but not exactly combining - white pages and outlines; $14.95. 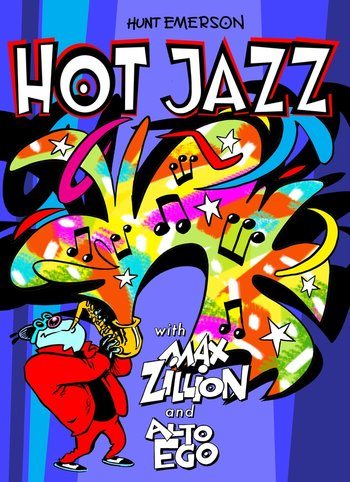 Hot Jazz: And here's some alternative comics of a very different sort - the gag-driven, underground-inflected approach of UK veteran Hunt Emerson, who's been making comics with his Max Zillion jazz man character since the 1970s. There was an earlier Knockabout collection of that material, 1986's Jazz Funnies, but this Kickstarter-funded 152-page edition from the same publisher collects all known appearances, along with new strips and tribute art from Jay Lynch, Gilbert Shelton, Peter Bagge and others; $18.95.

Prometheus Eternal: Being a 24-page color comic book produced in conjunction with the Philadelphia Museum of Art, which is running an exhibition centered around Peter Paul Rubens’s "Prometheus Bound" - the comic will offer cartoonists' takes on the mythological subject matter, with contributions from Grant Morrison, Paul Pope, Yuko Shimizu, Dave McKean, Farel Dalrymple, Andrea Tsurumi, David Mack, and cover artist Bill Sienkiewicz, among others. From Locust Moon, one of two indie-focused comics retailers (along with Journal advertiser Bergen Street) to recently wind down their brick & mortar retail activities while nonetheless remaining publishers. Samples; $5.99.

Hieronymus: This is a new one from Dutch artist Marcel Ruijters, commissioned by the Bosch500 Foundation and the Mondriaan Art Fund as a means of celebrating the man of the title for next year's 500th anniversary of his passing. Knockabout handles this particular edition en route to comic book stores, a 168-page biographical hardcover concerning "his working life, his family and his sources of inspiration," with a strong humorous element; $23.99.

Thieves & Kings Vol. 1: I do believe this fantasy series -- the work of Canadian creator Mark Oakley -- dates back to the days of the 1990s b&w self-publishing. It now appears to be proceeding as a webcomic, though I'd be lying if I told you I was familiar with all the ups and downs a series like this would have to encounter across the decades. This 375-page compendium from One Peace Books looks to be an omnibus of some sort, perhaps collecting the first two (or so) of the self-published print editions. I'm glad to see very longstanding projects like this getting new life; $19.95.

Nexus: Into the Past and Other Stories (&) DC Comics Presents: Darkseid War 100 Page Spectacular #1: Two cosmic affairs. I'm not sure how well-known it's even been that Mike Baron & Steve Rude have been creating new stories with their longstanding, once-enormously popular SF superhero concept since 2012, but it's been a semi-regular feature of Dark Horse Presents, and now the publisher is issuing Into the Past and Other Stories, a 144-page collection of those new pieces to accompany its six omnibus editions of earlier works. Darkseid War hails from an earlier time, being a thick comic book reprint of early Jack Kirby Fourth World issues, because why not tie in to a present superhero storyline bearing the Darkseid name? Nexus samples; $17.99 (Nexus), $7.99 (Darkseid).

Mobile Suit Gundam: The Origin Vol. 12 (of 12): Unless I have fallen drastically behind on my robot publishing updates, this should be the final entry in Vertical's hardcover line of franchise mech war comics from Yoshikazu Yasuhiko, a participant in the '70s anime series from which all of this model kit excitement springs. Expect some bonus short stories, as well as several interviews with Yasuhiko, who should also provide an afterword; $29.95.

Attack on Titan Vol. 17: Special Edition: There are a lot of promotional opportunities that manga publishers take which simply cannot be replicated on the North American scene; the audience isn't adequately prepped, and costs are maybe too high. And, until now, I'd think one of the most inaccessible such promotions would be the supply of a 'limited' or 'special' edition of one particular volume of a manga series, packed with an exclusive half-hour or so of animation on disc - great for targeting series with special appeal to compulsive collectors, or a television anime adaptation with home media to hawk. Well, lo and behold, Attack on Titan really is a hit, because Kodansha is now supplying an English-language dvd with this newest edition, unless you just want to buy the book, which is also an option. Sure beats variant covers; $19.99 ($10.99 without the disc).

Yowamushi Pedal Vol. 1 (&) Tsubasa: WoRLD CHRoNiCLE Vol. 1: Two manga debuts here, both notable as new manifestations of continuing efforts. Yowamushi Pedal is chapter 'who knows' in the ongoing saga of putting sports manga over on English-language readers; this one's a cycling story, sweetened heavily with Japanese nerd culture decoration and bolstered by an anime adaptation also available in localized form. The artist is Wataru Watanabe, and the publisher is Yen Press, which is doubling up on the Japanese editions (presently at an intimidating 42 volumes). Tsubasa: WoRLD CHRoNiCLE, meanwhile, arrives from Kodansha and CLAMP, the four-woman team of popular fantasists who helped supply so much of the '00s manga boom with stylish pages. Begun last year (and only up to vol. 2 in Japan), it's a continuation of one of CLAMP's extensive linked serials; $24.00 (Pedal), $10.99 (Tsubasa).

EC Archives: Weird Science Vol. 1: And finally - I mean, comics aren't always on top of cultural happenings, even really nerdy cultural happenings, but I've gotta hand it to Dark Horse for getting out a new edition of this 2006 collection of '50s EC science fiction comics on this particular Star Wars release week, because who provides the introduction? George Lucas himself. On the other hand, the updated coloring looks pretty odd and distracting to me, but you can't have it all, I guess! Samples; $49.99. 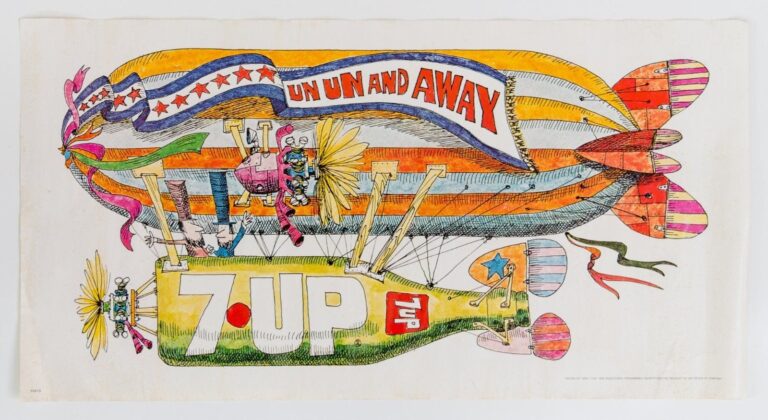 Gamble All Your Love 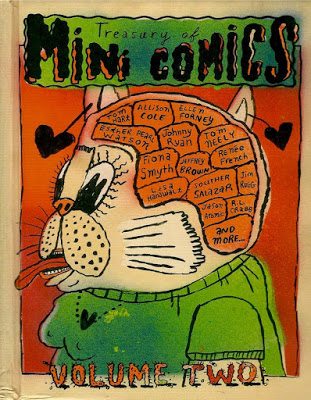