"Hi, we're the famous manga characters Golgo 13 and Shima Kōsaku! You might remember us from goofy running jokes throughout the ignoble history of this column, but today we're here to celebrate the holidays! And the 45th anniversary of Golgo 13; we're actually a piece of fan art commissioned for the 11/25 issue of Big Comic. Did you know Golgo 13 and Shima Kōsaku are basically the same comic? It's arguable! Both focus on impossibly fortunate characters who exist solely to carry out extremely specific goals, respectively the shooting of certain persons between the eyes and the preservation of unity and prosperity in the corporate ecosystem! It's all very warm and formulaic, although Shima here does grow older in quasi-real time, and will presumably die - just like you and your loved ones! Anyway, please enjoy this meager-- er, champagne flute-like installment of the column, and check back next week for a Christmas special! Unless something goes critically wrong!" 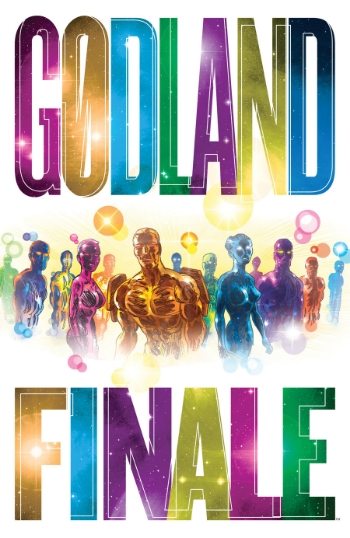 Gødland Finale: Interestingly, the theme of this week's spotlight is gonna be long-coming returns. I recall when Gødland started back in 2005. I believe one Dan Nadel, writing in a print magazine titled Comics Comics, expressed some admiration for its exploration of an obsolete superhero paradigm: 'Jack Kirby,' set apart from the two dominant paradigms of 'Frank Miller' and 'Alan Moore by way of Grant Morrison.' Thirty-six increasingly scattered issues passed, life and finance intruded on everyone, and now creators Joe Casey & Tom Scioli bring a 72-page(!) wrap-up, guaranteed to resolve all the stuff the authors haven't elected to leave unresolved. I think this arrives at a pretty interesting time, as Casey is currently exploring a lot of superhero concepts without the need to rely upon them for his livelihood, and Scioli (who's referred to this finale as a cross between The Hunger Dogs and The Dark Knight Strikes Again) has been experimenting with stripped-down, almost Frank Santoro-like webcomics, so I'm eager to see where this one goes. Preview; $6.99. 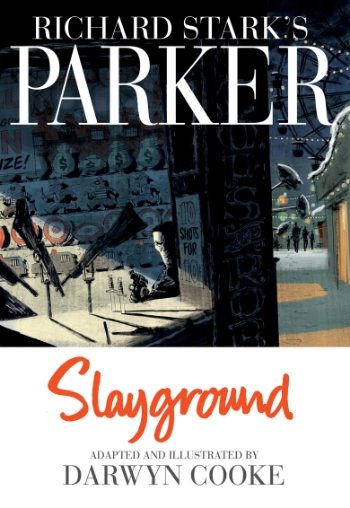 Richard Stark's Parker: Slayground: And this! I guess hype really does quiet down as a series continues, because the first of these Darwyn Cooke adaptations of Donald Westlake's beloved crime novels (The Hunter) was maybe *the* inescapable comic of 2009, its buzz extending well into the greater media horizon, and now - I mean, comics take a long fucking time, and virtually the whole of the online information rush is powered by novelty and distraction, neither of which are especially easy to divine from a familiar quality, and if you're not a super-prolific presence on the comics scene to begin with, it's really difficult to make vol. 4 of a series into enough of an event to register. And that's leaving aside shifts in taste among the tastemakers. NONETHELESS: this is the fourth hardcover Parker comic by Darwyn Cooke, running 96 pages, adapting a particularly beloved installment from 1971. Personally, I think these have gotten stronger as they've gone along, but I've never really freighted them with so much expectation as burdened the early installments. Preview; $17.99.

Buzz: While I don't think they're quite the center of attention they were maybe five years ago, Oni Press continues to pursue original softcover books in a manga-inspired vein. This, for instance, is a black, white and yellow story set in the world of spelling bees, where the competitive urge becomes something akin to fighting - not an unlikely shonen manga setup, with creators coming out of the webcomics scene. The writer is Ananth Panagariya (of Johnny Wander) and the artist is Tessa Stone (of Hannah is Not a Boy's Name). Interview/samples; $19.99.

Judge Dredd: Mutants in Mega-City One: This is another Simon & Schuster release of miscellaneous Dredd universe stuff to North American shores, 224 pages of mutant-focused content by a pretty wide swathe of series contributors. Take note that one included piece should be "Feed Me," a Sean Phillips-drawn five-pager which, unless I'm totally mistaken, constitutes writer Warren Ellis' sole original contribution to greater 2000 AD; $25.00.

Knights of Sidonia Vol. 6: Vertical seems to be closing in pretty rapidly on the Japanese editions of this now-longest-running Tsutomu Nihei series (up to vol. 11 in Japan). There's gonna be an animated television series next year -- which, at the moment, seems to be focusing on the most smoothed-down aspects of Nihei's evolving style -- which I guess makes some sense, as the whole concept reads like something from an older, space opera-prone generation of anime entertainment; $12.95.

Eerie #4: Yes, Dark Horse is still running these b&w comic book horror anthologies under the titles of old Warren magazines, and sometimes its an interesting mix of artists from all around. If the cover and solicitation for this issue is any indication, for example, we'll be seeing a gallery of monster art by Authentic Warren Contributor Howard Chaykin, along with stories by Al Ewing & Kelley Jones (2000 AD mainstay + '90s super-horror icon) and Ales Kot & Sloane Leong (young purveyors of politicized fiction and monster-body horror, among other things). Also: Norm Breyfogle, as I understand. Samples; $3.99.

Marvel Knights: Hulk #1 (of 4): Marvel has also been making some efforts at diversifying their lineup of creators, and I've gotta admit: a bande dessinée-style Hulk comic will at least warrant a flip on the stands. The artist is Piotr Kowlaski, who's done some work on the Polish and Franco-Belgian scene, in addition to the Joe Casey Image series Sex, where he brings a Schuitenesque fascination with architecture and an according (I like to imagine deliberate) diminution of bodies to a concept in which a superhero totally never gets laid. This story, however, is written by BD enthusiast Joe Keatinge, and sees Bruce Banner lost with no memory in a curiously Hulk-laden Paris. Preview; $3.99.

Sunday Night Movies: And finally, your not-really-a-comic-but-nonetheless-an-implication-of-sequence of the week - a new 10" x 7" Drawn and Quarterly collection of illustrations by Leanne Shapton, 96 pages devoted to capturing key moments from fondly-remembered films in woozy watercolor paints. Samples; $19.95. 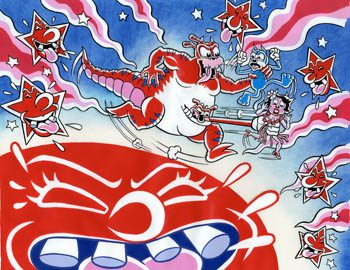 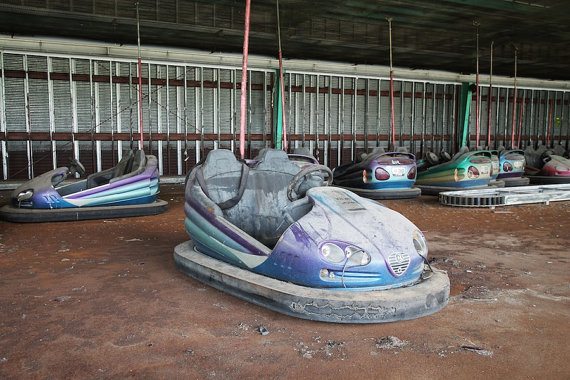