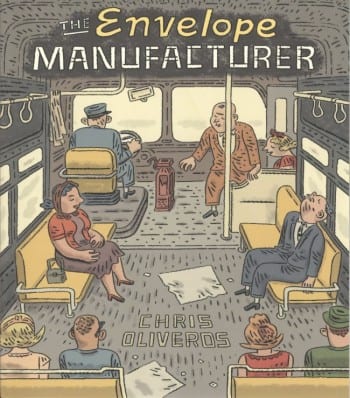 The Envelope Manufacturer: Because we love memories and fun here in this column, I urge you to think back to 1998, when we were all beautiful and virtuous (or, ideally, unborn). There, in between fulfillment of his duties as founder and publisher of the Canadian comics concern Drawn & Quarterly, artist Chris Oliveros self-published the debut issue of a solo project, The Envelope Manufacturer - a drama of struggle and disappointment in the small business world. A second issue followed in 2006; "almost immediately after they came out, I wanted to disown them," Oliveros noted to interviewer Sean Rogers in 2015's Drawn and Quarterly anniversary tome, and this was not idle deprecation. Since 2011, Oliveros had been working on a total re-draw of the project, and now it sees completion as a 104-page softcover graphic novel, again self-published, with D&Q functioning as distributor. The subject matter certainly evokes the works of Seth, particularly his ongoing Clyde Fans, but Oliveros is a broader cartoonist, conveying a sort of obsessive panic born from worsening circumstances - his characters holding long conversations while one plunges through the air to his death, word balloons issuing from the outskirts of panels to chase and surround figures that seem often in flight; $16.95. 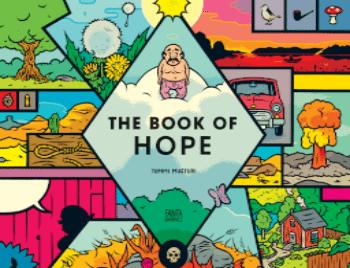 The Book of Hope: Speaking of serialization, I recall early parts of this coming out of the Belgian publisher Bries in English, though creator Tommi Musturi goes back further on the Finnish and international comics scenes, having notably edited the Glömp anthology. This 8.75" x 6.75", 224-page color Fantagraphics hardcover is now a full compilation of the artist's most narrative expansive work, manifesting scenes from life-as-lived from the perspective of advanced age in a manner that may be called fragmented or even psychedelic. Take a look at this one. Samples; $34.99.

Frank in the 3rd Dimension: Being a 26-page selection of "anecdotal visual vignettes, dioramas, moments pickled in time" - all-new, and all relating to Jim Woodring's ever-ambulatory anthropomorph. A 10" x 8" Fantagraphics hardcover, this project vows "more than 150 layers per drawing in order to round and 'sculpt' each image into full, volumetric 3-D," which sounds immersive in the way I find 3-D comics to work best: as a perspective on depth, rather than a simulation of characters jumping out to greet me. Fuck that, stay in the book. Also, word balloons tend to ruin the sensory appeal, demanding one artifice too many under the circumstances, and you know Frank'll have none of that; $22.99.

Cruising Through the Louvre: The next in NBM's long-running translation series of comics informed by the holdings or the history or the presence of the famous museum, this time from David Prudhomme, whose Rébétiko (a portrayal of devel-may-care musicians in 1930s Greece) was translated by SelfMadeHero a few years back. This 80-page, 8" x 11" color work sees the artist racing through the halls, catching moments of museum patrons in personal communion with various works. Jirō Taniguchi of The Walking Man and Hotel Harbour View should have one of these coming up before long. Preview; $22.99.

Religion: A Discovery in Comics: And here is the next English edition of work by Amsterdam-based Margreet de Heer, whose had two prior educational comics released by NBM. This one dates from 2011, I think - a survey of five major faiths, with a focus on history and practice. NBM, I remind you, is a frequent advertiser on this site, and is now entering its 40th year of existence (its original name was Flying Buttress, under which it translated Jean-Marc Loro's Racket Rumba and some early collected shorts of Enki Bilal); $17.99.

Amazing Forest #1 (&) Pencil Head #1 (of 5): Two comic book debuts, different in every way beyond the bare facts of the comic book format. Amazing Forest is a new IDW anthology anchored by two writers: Ulises Farinas & Erick Freitas, the former a well-traveled artist and critic, and both collaborators on the short-form project Gamma. A different artist will be handling each story by the two, with the initial lineup including Yumi Sakugawa, Matt Rota, Julien Dufour and Melody Often, with Paul Chadwick providing a variant cover. Pencil Head, meanwhile, is the new Image series from prolific indie comics veteran Ted McKeever, not just a one-man show but a "semi-autobiographical take" on comics as an institution; $3.99 (each).

Master Keaton Vol. 5 (&) Monster: Perfect Edition Vol. 7: A whole lot of comics fronted by Naoki Urasawa, albeit with no-doubt strong narrative contributions by Takashi Nagasaki (and, obviously, lots of drawing by studio assistants) (and, Master Keaton was co-created by Hokusei Katsushika) (trust nobody who treats Urasawa as solo act). I'm just going to lay my cards on the table and state flatly that I prefer Master Keaton to Monster (which I never finished): the former, of course, is highly repetitive, lacking profoundly in narrative build or sustained character development, with deep dips into the sentimental stickiness that Urasawa & co. cannot resist - yet it functions as a better window than generally available into a type of mainline, no-big-deal seinen comics escapism very much active in manga for older readers, and in this way it represents a mighty swathe of otherwise inaccessibly non-lucrative-in-translation popular culture. I guess what I'm saying is, Master Keaton is not 'A'-level stuff, and thank VIZ for that; $19.99 (each).

Paleo: The Complete Collection (&) Horror by Heck: A pair of reprints from houses known for such efforts. Paleo is the creation of Jim Lawson, best known for a lot of work on the Teenage Mutant Ninja Turtles franchise. However, from 2001-04, he wrote and drew some of his own dinosaur comics, which Dover now presents as a 400-page collected edition, with the equivalent of two unseen issues and bonus stories created with Tyrant author Stephen R. Bissette, who also pens an introduction. Horror by Heck is an IDW hardcover, collecting 152 pages of pre-Code horror comics by Iron Man co-creator Don Heck - not so well-known a terrain; $19.95 (Paleo), $24.99 (Heck).

Walt Kelly and Pogo: The Art of the Political Swamp: Finally, your book-on-comics of the week, a 268-page biographical study of the titular satirist, "unravel[ing] the symbolism and word-play of his art for modern readers." The author is James Eric Black, and the publisher is McFarland; $39.95. 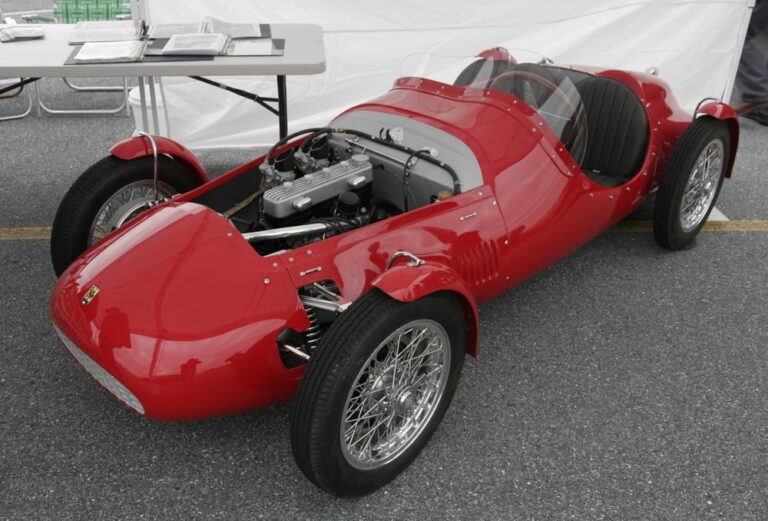 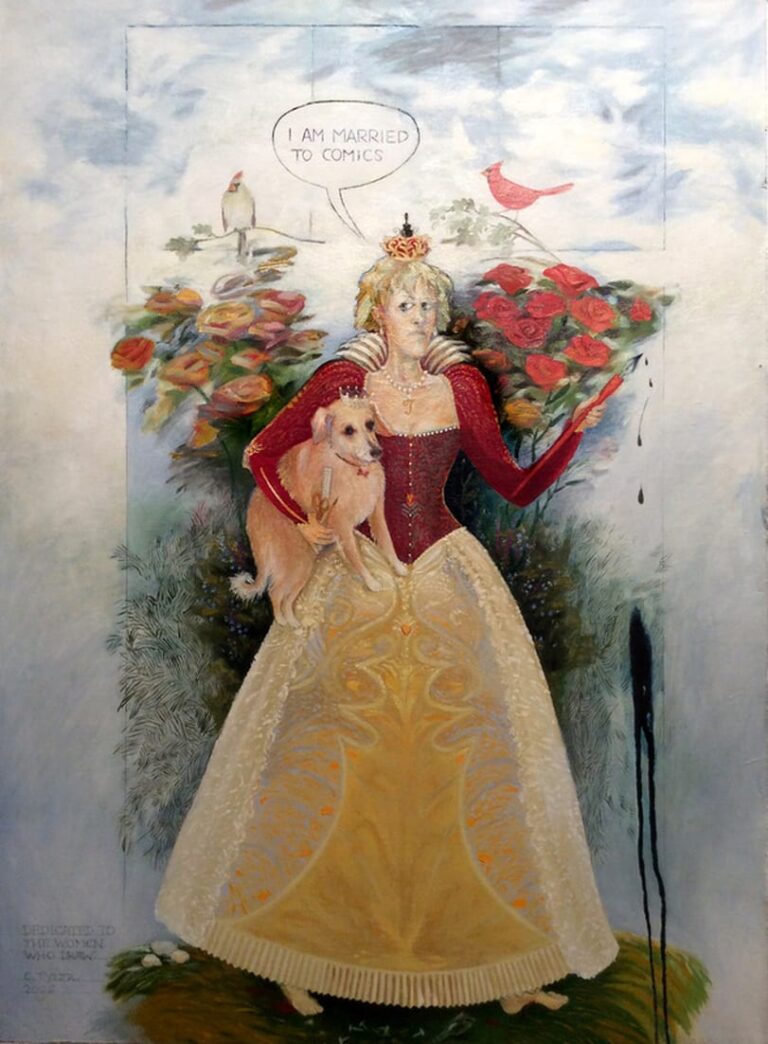