Recently, I've been looking at a lot of pornography.

I was asked to appear on a podcast to discuss the re-release of a 1980s pornographic manga, Urotsukidōji: Legend of the Overfiend; it's an adjacently notorious work, the inspiration for a similarly explicit anime which, through the caprice of cultural moment and accessibility, became emblematic for a time of anime as a whole. I know you've heard of "tentacle sex." Legend of the Overfiend is the anime that seared the idea onto the minds of westerners, eager to draw exotic conclusions about deliciously inscrutable and dangerous foreigners.

The thing is, the "tentacle sex" idea was only one manifestation of a very specific, pragmatic idea: that you could both circumvent the censorious regulations on image-making in Japan and add a great deal of visual novelty via phallic substitution. Penises, engorged and unobscured, are obscene; tentacles, arguably less so. I found a great resource in an unusual 2016 publication: The Hentai Manga Scene: Pirate Edition, a 90-page zine by one Kimi Rito (translated by Makoto Schroeder), consisting of interviews with various ero manga personalities, Legend of the Overfiend creator Toshio Maeda among them. There is even a sidebar on the history of 'tentacle' sex in comics, from the suggestive '70s works of smut pioneer Hideo Azuma to variant manifestations of living wires and metal tendrils, concluding with the recent 'monster girl' trend in nerd-focused media.

But that's important: tentacles are not a mainstream taste. They were never even a dominant favorite, and the fortunes of the fetish declined as its moment passed in the Japanese '90s, only resurfacing periodically in specialist venues. You still hear jokes about it in the west, though. Some promotional efforts are just too effective, and what starts as a titillating joke becomes an undulating live illusion. It's not too far removed from how the early days of manga in English nurtured this idea that 'manga' was something not totally removed from the dense, detailed work in favor among comic book aficionados. The salad days of Masamune Shirow, creator of the endlessly adaptive likes of Appleseed and Ghost in the Shell, and, more recently, a terrific amount of porn.

Here is some tentacle sex as assembled by Masamune Shirow in 2013.

Another illustration will help, published this time in 2016.

What's evident from the W・Tails Cat line is that Shirow is pursuing a type of collage, albeit of a very different sort than your Jess Collins or Julie Doucet. Where in Intron Depot Shirow might display all of the color variations he made for a particular drawing of a tank, in W・Tails Cat he offers bodies in differing states of dress, limbs manipulated, cut and pasted and pasted and pasted to create a mass of gleaming flesh, often in outright defiance of narrative eye-guiding; this is not a march, it is a wallow in glistening, taut goo. An artist of my acquaintance once referred to this stuff as the visual equivalent of a urinary tract infection, and indeed while these images give the signal of indulgence in luscious blossom, there is something almost viscerally unhygienic about them, like a thick bacterial heat rising and tickling your face.

When you've read a few of these books, you quickly pick up on the fact that the women always have a much lighter complexion than the men; further, while the women are of Shirow's usual ostensibly international type, their facial features and body shapes hew to the 'classic' style of Shirow's manner of drawing cute girls. The men, meanwhile, have wildly differing body types and facial features, often with readily apparent ethnic characteristics. I wonder if Shirow thinks about the racial dimension of these works. I wonder, because I think what actually interests him is the play of color and texture. Oh lord the textures. The surface - the play of light on water and oil. In his mainline SF works, Shirow often suggests that bodies can be augmented or totally replaced, that bodies are but vehicles for the self. In his porn SF, the vehicles are washed and waxed, and arranged across the showroom floor.

It reminds me a little of death. In 1971, the experimental filmmaker Stan Brakhage assembled one of his greatest masterpieces, The Act of Seeing With One's Own Eyes - for half an hour, we are witness to soundless footage of forensic pathologists at work in a Pittsburgh, Pennsylvania morgue, with special emphasis given to the state of cadavers. In the absence of consciousness, this is what all of us are: meat and bone. What Brackhage does is not totally unlike what Shirow does: he considers the play of illumination of skin. He delves into textures: ashy burns, the rubbery quality of entrails, the ripple of blood in wounds. It is of no bother to the dead; now, their bodies are only materials, silently contemplated as if hovering just above, painless and newly free. Brackhage depicts the surface of corporeality; the viewer assumes the depth of sentience. It is a supremely calm film.

What is different about Masamune Shirow's work is that his curation of surfaces is meant to excite. Look again at the links above. Look closely. If you squint, you'll notice that in every one of the pages I've shown from W・Tails Cat, some of the bodies are accompanied by date stamps. Shirow is not an arbitrary collagist; some figures may date from 2003 on one side of the page, while others originate in 2008. Turn to the back of these books, and you find out that some of the images have been snipped from other Shirow publications. The dating scheme is identical to that used in Shirow's recent Intron Depot art books, where the notional purpose is to catalog variant forms of images on their way to completion; in W・Tails Cat, different variants are jammed together to form the illusion of life at its most flush.

And is this not the sex we are ready for today? 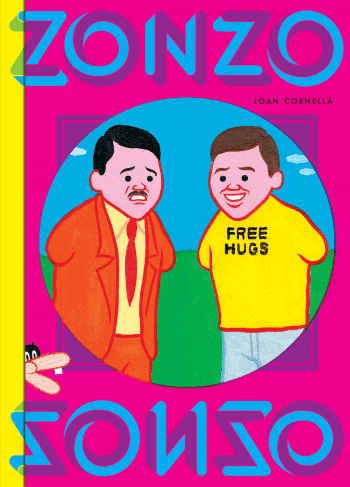 Zonzo: VIABLE OFFENSE IN 2017 #1 - the bleak and violet comedy of Spanish artist Joan Cornellà, in which grinning characters suffer and enact hateful ironies in a universe devoid of compassion. No words, all color, the 56-page second in a line of hardcover Fantagraphics releases; $14.99. 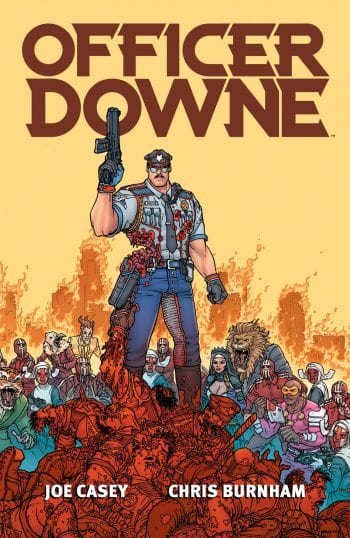 Officer Downe: VIABLE OFFENSE IN 2017 #2 - buoyant, boyish ultraviolence with a wink and a grin, courtesy of writer Joe Casey and artist Chris Burnham. Originally from 2010, this supernatural lawman one-shot is now a feature film from director and Slipknot co-founder Shawn Crahan, which makes Image's new 192-page edition a veritable celebration of itself - the comic is paired with Casey's complete screenplay for the movie, along with "hundreds" of production photos; $19.99.

Last Sons of America (&) Wires and Nerve: Two bookshelf-ready releases about which I know absolutely nothing, though they may be interesting to flip through. Last Sons of America was a 2015-16 series from writer Philip Kennedy Johnson and artist Matthew Dow Smith (colored by Doug Garbark), a speculative thriller about adoption agents sweating through a world where Americans have been made infertile and business is cutthroat. BOOM! publishes the collected edition. Wires and Nerve is the comics debut of YA fantasy writer Marissa Meyer, working with artist Doug Holgate on a 240-page piece about a lady android battling wolf-people in space, a scenario apparently in conjunction with Meyer's prose works. Macmillan publishes; $19.99 (Sons), $21.99 (Wires).

Dorohedoro Vol. 20: Your manga pick of the week is an increasingly common sight - a long series nearly caught up with the Japanese editions. Specifically, this popular Q Hayashida grimy fantasy opus releases collected editions on a more-or-less annual basis in Japan, with its 21st number arriving last September. So, try and savor it while VIZ has it here; $12.99.

The Complete Scarlet Traces Vol. 1: Interesting history behind this longstanding collaboration between writer Ian Edginton and artist Matt "D'Israeli" Brooker - an original sequel to H.G. Wells’ War of the Worlds, the Scarlet Traces serial began as a feature on the short-lived UK web entertainment portal Cool Beans World, eventually finishing its first series in Judge Dredd Megazine in 2002. A creator-owned work, the pair then brought the project to Dark Horse, which published (among other things) a formal adaptation of the Wells novel, again first as a webcomic, then in a print edition. Later, Rebellion purchased the rights to the property from the creators, who just last year created new stories for 2000 AD. This 144 page Rebellion paperback should collect the earliest (2002) work, along with the Dark Horse Welles adaptation, but *not* the other Dark Horse material or the more recent 2000 AD stuff, presumably saved for later volumes. D'Israeli puts together some nice-looking comics; $19.99.

The Kamandi Challenge Special: Due to begin later this month, DC's Kamandi Challenge is an exquisite corpse-type experiment where various creative teams will create a serial featuring Jack Kirby's post-apocalyptic cult favorite, each team supplying a cliffhanger the subsequent team must somehow resolve. This comic, however, is a 64-page reprint of 1975's Kamandi, the Last Boy on Earth! #32, written and drawn by Kirby, with inks by D. Bruce Berry, with some other vintage materials relating to the upcoming project. It'll probably be fun to pick up a big, fat Kirby Kamandi comic book; $7.99.

The front page image this week is from the hand-scratched title cards to Stan Brakhage's The Act of Seeing With One's Own Eyes, the perfect accompaniment to any existential crisis or uncomfortable gathering that warrants dispersal. 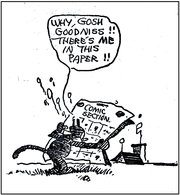 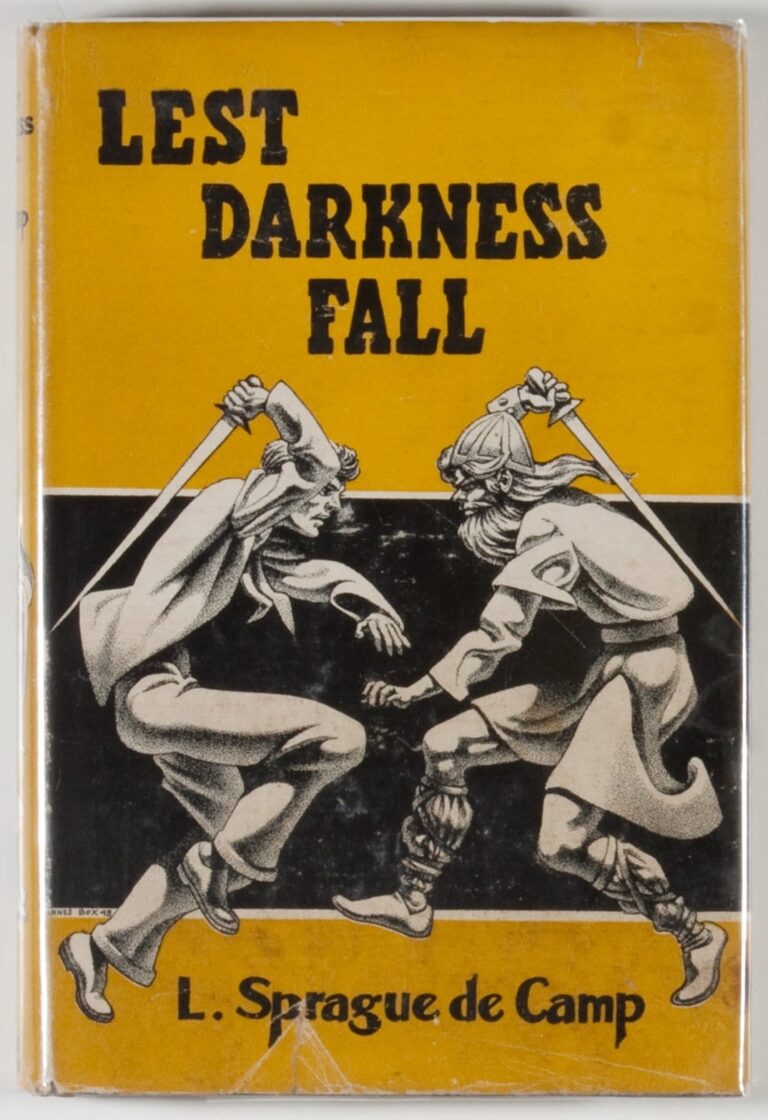