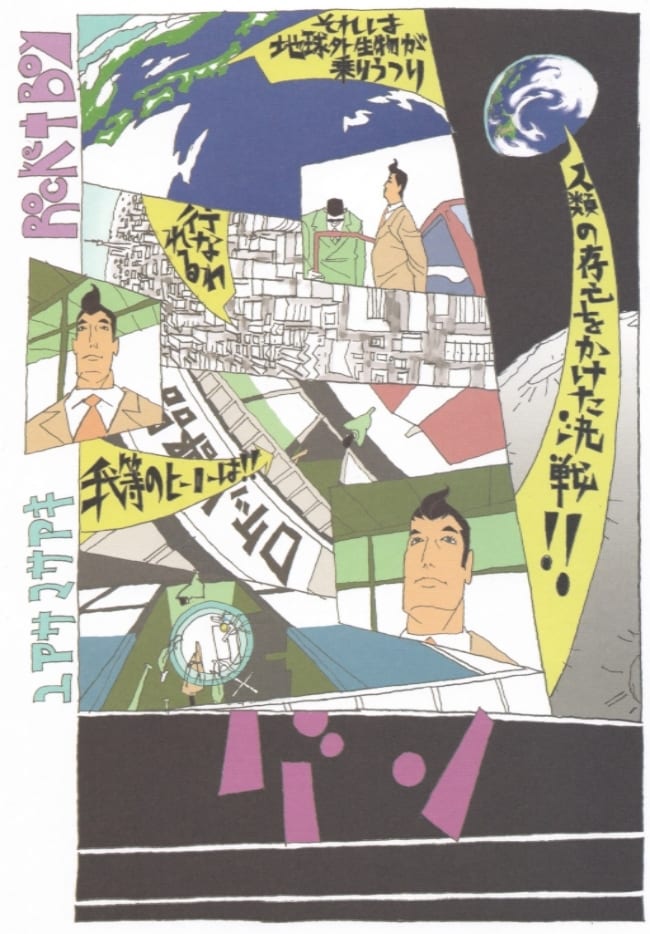 Talk of small-press cartoonists going off to work in animation reminds me of this little comic by prominent Japanese animator (and Adventure Time episode director) Masaaki Yuasa. It's titled Rocket Boy, and I don't think it was ever formally published until Yuasa's 2014 Sketchbook for Animation Projects. It's not even dated, although it apparently hails from the late '80s or early '90s - fodder for a prospective animation project that never got off the ground; Yuasa instead cultivated a long association with the Crayon Shin-chan franchise. It reminds me of how the top names in today's American television animation -- Rebecca Sugar, say, or Pendleton Ward -- have all done a few comics in their time, but not the sort that occupies space on big box bookshelves, or stokes the fervor of the aging alt-comics connoisseur. Theirs are webcomics, or small-press works occupying a different continuum - their best energies, we might imagine, reserved for the animation works which eventually employ some of the names I may list below... 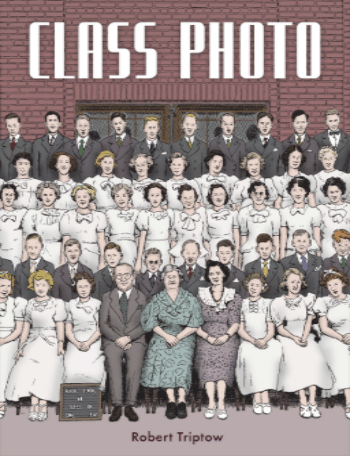 Class Photo: This one snuck up on me, as I suspect it will many of you. The work of cartoonist Robert Triptow -- probably best known as an editor for anthologies like Gay Comix and Strip AIDS U.S.A. -- this 64-page Fantagraphics release is an elaborate fictionalization of one image: a 1937 public school class photo found "under a pile of garbage," from which Triptow extrapolates various personal histories and blended interests. Very intriguing, dense-feeling stuff, definitely worth flipping through. Samples; $14.99. 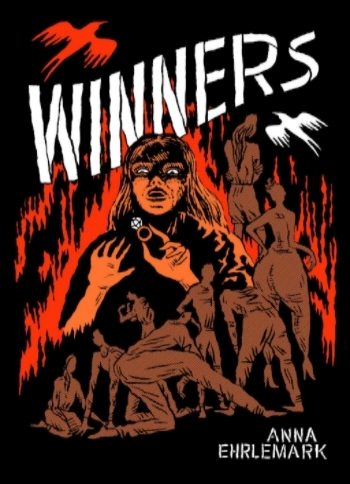 Winners: Being a Floating World Comics release (via Alternative) of short pieces by Swedish artist Anna Ehrlemark, concerning "feminist, queer, anti-capitalist themes" involving "family, nostalgia, chance, witchcraft, sex, abstinence, economy, and revenge." I think this is the first collection of the artist's work, having appeared previously in anthologies like Stripburger - stark and unsettling, from what little I've seen. Samples; $14.95.
--

Titan #2: Speaking of Alternative, here is another book it is distributing to comic book stores on behalf of Study Group Comics (which, in the interests of transparency, I again remind you has published and may yet publish writing by me in its Study Group Magazine). A Kickstarted print iteration of an SF webcomic from François Vigneault, Titan presents the personal and personnel controversies of a distant moon station. Preview; $4.95.

Sunny Side Up: I have not read any of the Babymouse children's books created by sibling collaborators Jennifer & Matthew Holm, although I do somehow know the former is a graduate of the college sitting about three blocks from where I'm writing this. Anyway, this is their entry into the YA-targeted memoir scene through the mighty Scholastic, making it probably your big box bookstore release of the week as well. A 224-page color softcover; $23.99.

Johnny Red #1 (of 8) (&) Klaus #1 (of 6): I saw the preview for the AMC Preacher adaptation airing next year - it did an efficient job of obscuring any of the Vertigo comic's supernatural or ostentatiously religious elements under a heavy frosting of rueful bloodshed appropriate for the television antiheroes of today's acclaim. I'm not excited, but this does arguably push the series closer to the not-dissimilar tone of more recent Garth Ennis-written war and action comics. Johnny Red is the latest among them, a Titan miniseries reviving the Tom Tully/Joe Colquhoun-originated WWII aviation battle series with artist Keith Burns, a collaborator on The Boys. Also, I went to Home Depot this weekend, and they already had the fucking Christmas decorations up. Klaus is a BOOM! miniseries in which Grant Morrison writes "Santa Claus: Year One", and that is language taken directly from the publisher, you can go right ahead and check. The artist is Dan Mora. Johnny preview, Klaus preview; $3.99 (each).

Valérian and Laureline Vol. 10: Brooklyn Line, Terminus Cosmos: The holiday season is beginning, and with it the expected onslaught of Star Wars merchandise - I particularly like the huge robot orb that beeps whenever I pass by the Nintendo demo kiosk at Target, presumably calling me a child. However, your local well-appointed comic shop may here afford you sufficient opportunity to appreciate one of the visual models for the original trilogy: the stylish and often satirical, metaphorical, metaphysical SF adventures of writer Pierre Christin and artist Jean-Claude Mézières. This 48-page outing hails from 1981, and completes a storyline begun in the album prior (Châtelet Station, Destination Cassiopeia); fittingly for a time-travel scenario, these specific books don't so much reflect their Lucas-driven movie contemporaries as look ahead to devices included in Luc Besson's much-later The Fifth Element, on which Mézières eventually worked. Besson will purportedly have a Valérian movie out in 2017, when it engage in spirited rhetorical (if marginal economic) competition with Rian Johnson's Star Wars Episode VIII. A Cinebook release. Samples; $11.95.

Batman: The Dark Knight Saga: Under no circumstances will DC allow you to forget the imminent release of Dark Knight III: The Master Race and its 70 variant covers, so why not by bludgeoned by primary texts? This is a 512-page hardcover omnibus pairing the trend-setting 1986 Frank Miller/Klaus Janson/Lynn Varley original with its berserk 2001-02 Miller/Varley sequel, the latter most notable for Varley anticipating art comics coloring aesthetics probably still on display at this weekend's Comic Arts Brooklyn, then dropping the mic on funnies forever. GOD BLESS. It just occurred to me that some people probably wish that series would get a 'remastered' coloring job, but thankfully we are spared the fright here; $49.99.

Miracleman Artifact Edition (&) Usagi Yojimbo Gallery Edition Vol. 1: Samurai and Other Stories: Is it repetitive to explain every week that these books reproduce b&w original art pages in color at roughly their actual size (or just really big) so as to provide a simulation of viewing the real thing? Well, I blame publishers for putting out so many! Yes. Another argument won. Miracleman is a 15" x 20", 144-page IDW joint, collecting assorted pieces (not full stories) from Garry Leach, Alan Davis and John Totleben, all of whom worked on a very notable superhero revamp with writer Alan Moore. If you liked the glimpses of original art Marvel used to pad out its comic book-format re-serialization of the stuff -- and holy shit, John Totleben -- consider this a much closer look. Usagi Yojimbo is a 12" x 17", 240-page Dark Horse showcase for Stan Sakai, covering what I presume is mainly early work with his anthropomorphic rabbit ronin; $125.00 (each).

The Complete Peanuts Vol. 24: 1997-1998 (&) Only What's Necessary: Charles M Schulz & the Art of Peanuts: These are not the only Peanuts-related books out this week -- Fantagraphics has a Red Baron-themed book and a new boxed set -- but I think these are the most notable. Vol. 24 of Fanta's complete library brings us terrifyingly close to 25's grand finale, and just in time for this weekend's 3D CGI movie adaptation; Paul Feig, a producer on that film (and director of big-time comedies like Bridesmaids and Spy) was scheduled to write an introduction the last I heard. Meanwhile, Abrams commemorates the occasion with Only What's Necessary, a 304-page, 12" x 9" landscape-format art book fronted by Chip Kidd, also of 2001's high-profile (and I think rather graphically influential) Peanuts: The Art of Charles M. Schulz. This new one has Kidd and photographer Geoff Spear illuminating archival materials from the Charles M. Schulz Museum and Research Center, with assorted supplementary texts; $29.99 (Complete), $40.00 (Necessary).

Ian Fleming's James Bond #1: Also getting a new movie this weekend (in the U.S.; maybe you've already seen it) is the international murder machine they couldn't turn off. Wait, that's Johnny Cool. No, this is a different gunman, now returning to comics as written by Warren Ellis, whose affinity for ragged specialists should prove very appropriate. The artist is Jason Masters, notable for numerous Batman family comics, and published by Dynamite. Preview; $3.99.

Blankets: Finally - well, what can you say about Blankets? A colossus whether you like it or not, the 2003 Craig Thompson autobiographical doorstop struck my tender eyes at the time as the commercial peak of an emotional memoir trend critically bolstered via the early works of Jeffrey Brown. Of course, these comics aren't otherwise very closely related, and now it seems Thompson better anticipated the wave of forthright, personal narratives popular with mainline book publishers and YA audiences. There was also, inevitably, vigorous pushback - Austin English detailed the peril of mistaking well-marketed and easily-digestible youth literature as pantheon-caliber work the following year in this forum's print edition, while Jean-Christophe Menu's French-language castigation of the work in 2005's Plates-bandes is summarized in Bart Beaty's Unpopular Culture (2007) as detailing a weak stylistic derivation of Blutch, weaponized by establishment (French) publishers as a means of sapping the relevancy of the small press. I'm more of a Habibi guy myself, not-inconsiderable flaws and all, but Blankets is and perhaps always will be *the* Craig Thompson comic for many, and maybe *the* comic of their adolescence, and now Drawn and Quarterly (succeeding Top Shelf) presents a pair of handsome-looking new editions. Samples; $29.95 (softcover), $39.95 (hardcover). 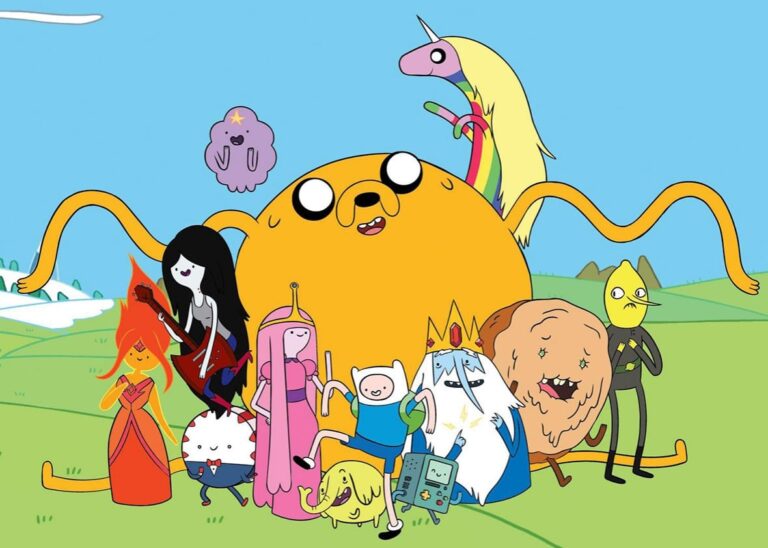