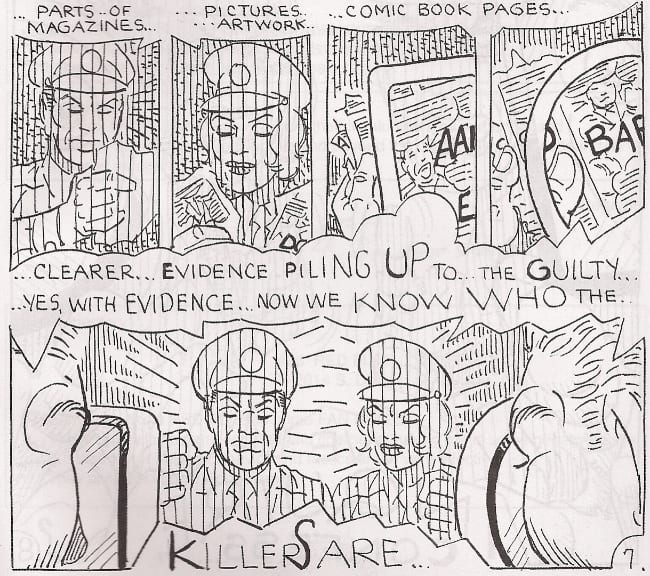 Last week saw the release of Pax Americana, a collaboration between writer Grant Morrison and artist Frank Quitely (and colorist Nathan Fairbairn, and letterer Rob Leigh, and editor Rickey Purdin, and etc. etc) with an eye toward delineating cycles of retributive violence as demonstrated by the folding of superhero critique into the superhero genre itself - which is to say, it's a hot take on Watchmen, the famous funeral for superhero comic books that became a canny means of dignifying and revivifying the very same. It was a fun read, but at the same time I couldn't help but think back to another superhero murder mystery from earlier this year; one authored by the very man around whose work the criticisms of Watchmen centered.

#9 Teen is a comic book by Steve Ditko, the nineteenth in his continuing series of doing-whatever-I-want comics (the twenty-first is imminent). The final story of the issue concerns a pair of police investigators who come across the corpse of a superhero, which has been launched from a nearby skyscraper. The pair are initially flummoxed, but soon find themselves joined by a pair of additional investigators, always pictured as staring through magnifying glasses just in front of the 'camera,' so that the reader appears to be constantly looming between their shoulders. You might say they are extra-diegetic characters, who aid the formal protagonists in examining the scene for clues, including letters, ink, paper: all of the elements of a comic, which the crew assembles. And only upon looking at the comic -- perhaps not so unlike the viral comic active in The Multiversity, the DC series from which Pax Americana springs -- can the investigators ascertain the identity of the killers.

They are pragmatists. Rational. If you grant that you are a character in a comic book, then there must be an author. And for a character to die, who is the killer but the author? And, who leans on the author to produce works that kill characters? A publisher? Who do they answer to - customers? Shareholders? Had they willingly stated that life and heroism were ideal, they would have been ideal by their action; to carry the pretense of recording the world as it is, they surrender their own autonomy as beings to the unreal, circumstantial, collective. Perhaps Grant Morrison senses the same thing, sending his Captain Atom, potentially, beyond the dimensional confines of Pax Americana to aid the Multiverse against its deadening meta-foes with the Soul of Superheroes on the line. But Ditko is not beholden to continuing the lineage of Detective Comics - he's taking this fight straight to the source. Two choices: you buy it, or you don't. 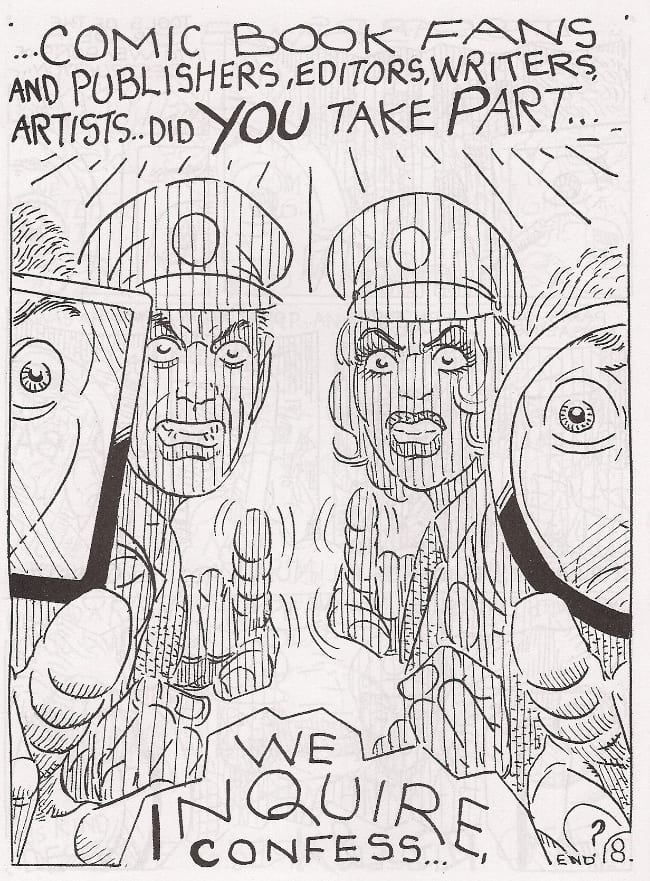 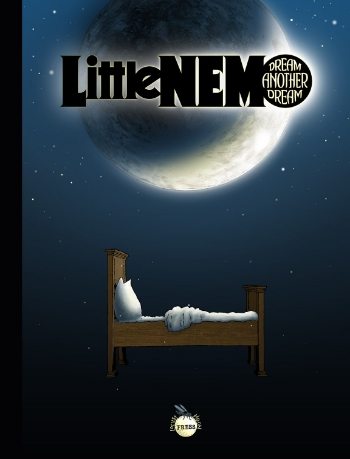 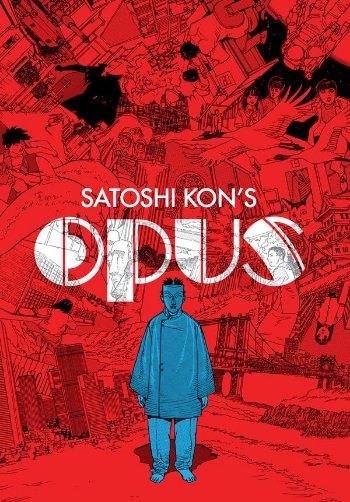 Satoshi Kon's Opus: Nothing like reaching for the stars with the title. There is probably nobody in Japanese animation more revered in the west than the late Satoshi Kon - Hayao Miyazaki is more widely-known, sure, but talk to a connoisseur for long enough and they'll tell you, with great enthusiasm, exactly which of his films are inexcusable garbage, if not explicitly launching into a harangue about how he's such a fucking asshole. In contrast, Kon remains a veritable saint, which is undoubtedly a boon to a publisher like Dark Horse, which now releases a 384-page compendium of Opus, a 1995-96 manga project which I believe halted production when its serializing magazine folded, and was subsequently abandoned in the midst of its author's burgeoning film career; presumably this edition is based on a posthumous Japanese release, which added some unpublished content. The plot concerns a cartoonist dragged into his own creation to face the consequences of what he's planned for his characters, which is as 'Satoshi Kon' a scenario as can possibly be imagined. Dark Horse and Vertical have two additional books of Kon's manga (one each) planned for 2015, so get settled. Preview; $19.99.

Labyrinthectomy/Luncheonette: Your Genuine Alternative Comic Book for the week -- although I spotted it in at least one shop last week, so maybe it's already there -- from the appropriately-named Alternative Comics and artist Chris Cilla, whose 2011 book The Heavy Hand was good, weird horror stuff. This one looks to be more of a classic one-man anthology, 32 pages of assorted shorts grouped into two sections, each accessible by flipping the comic; $4.99.

The Borgias: The thing is, even folks who weren't actively annoyed by A Certain Superhero Comic Book Cover (center top) were prone to noting that the image itself didn't represent Milo Manara at his recent best. No, for that you're going to want to look through this lavish 2004-10 series, written by Alejandro Jodorowsky with an eyebrow firmly raised in the direction of maximum papal irreverence. I know a lot of people find Jodorowsky and his licentious mytho-spiritual chest-beating unbearable -- or at least increasingly dull, now that we're likely past having the cream of his comics output available in translation -- but there's a sense of goofy showmanship to this whippings-in-the-nunnery/satchel-full-of-severed-dicks dirty movie stuff that leavens it for me in comparison to Manara's solo adult work, with its acrid streaks of sadism and humiliation. Dark Horse collects the 215-page entirety as an 8.7" x 11.2" hardcover, re-translated from the 3/4s Heavy Metal released some years ago, with an introduction by Fábio Moon and Gabriel Bá and additional remarks by Jodorowsky. Preview; $59.99.

Tales of An Imperfect Future: But that's not all Europe has in store this week, as Dark Horse (here in collaboration with Strip Art Features) also brings an 88-page collection of early '80s b&w short works by Alfonso Font, originally published in the Spanish parallel edition of the famously awful Warren erotic SF magazine 1984, which Josep Toutain (whose Selecciones Ilustradas provided Warren with a good deal of Spanish-origin art for Creepy, Eerie and the like) co-founded as a forum for original domestic material. Font popped up in the American Vampirella around the same time, if I'm not mistaken. Anyway, expect twisty moral stories in the b&w magazine manner, all cultural differences aside. Samples; $17.99.

Arkwright Integral: Ooh, intégrale - très bande dessinée! Being a 560-page, 8" x 11" doorstop compiling the entirety of Bryan Talbot's multiversal Luther Arkwright adventure stories, a canon stretching from the late underground comics/New Worlds SF-informed period of the 1970s through the eve of the millennium in 1999, embodying the development of the British graphic novel along the way. I particularly like the extremely heavy and dense '70s/'80s material. The b&w pages should reflect restoration efforts undertaken in recent years, and an afterword by Warren Ellis will be included. Samples; $59.99.

Robbie Burns: Witch Hunter: Talbot also had his 2000 AD period; many still do, including the creators of this 96-page Scottish poetry-as-action/fantasy concept, Gordon Rennie & Tiernen Trevallion of the occult police procedural Absalom. They are joined by co-writer Emma Beeby, a frequent collaborator of Rennie's (and the first woman to write for the Judge Dredd strip). The publisher, however, is Renegade Arts Entertainment; $19.99.

Incredible Change-Bots Two Point Something Something (&) The Transformers vs. G.I. Joe #4: DOUBLE the disguise this week, as transforming robots take you back to your(?) youth. Change-Bots is a continuing Top Shelf series from Jeffrey Brown, and this Marvel-like 'point something' issue promises a lot of interstitial, supplementary work, "short stories, gallery art show pieces, game and toy designs, artwork created for fan club members, interviews with almost every Change-Bot, and more" across 224 color pages. Transformers vs. G.I. Joe is actually an official, licensed comic from IDW, wherein Tom Scioli and co-writer John Barber reconfigure the whole idea of a franchise crossover into a frenzy of smashing toys together, halfway between childlike hyperactivity and adult awareness of violence/threat. This fifth issue (there was a #0) should mark the end of the first movement, and close out the inevitable first collected edition; $19.95 (Change-Bots), $3.99 (TvJ).

Madman In Your Face 3D Special! (&) ODY-C #1: And here's a pairing of new Image projects from familiar names. Michael Allred is pretty good about letting loose a new Madman special every so often, and this one bears the distinction of 3D effects throughout a new story featuring the title character, as well as a large number of guest pin-ups and some 3D-converted older pieces. It's 80 pages in total. ODY-C is the new series from writer Matt Fraction, who's become something close to the face of Image in terms of hugely successful projects - this one is a space opera variant on Homer with a cast of mostly-female characters, created in collaboration with artist Christian Ward. Online-only ODY-C prelude; $9.99 (Madman), $3.99 (ODY-C).

Crossed + One Hundred Taste Test (&) Prophet Strikefile #2 (of 2): Wrapping up the wilts-on-the-edge-of-a-table comics for the week are two supplemental items of special note. Crossed is a sneak preview of the upcoming Alan Moore-scripted run on Avatar's signature zombiesque violence comic (get it? "Taste Test"?), with comments from the writer and preparatory drawings from artist Gabriel Andrade. Prophet Strikefile wraps up an Official Guide to the Brandon Graham-fronted Image series, in anticipation of its own upcoming final storyline; $2.99 (Crossed), $3.99 (Prophet).

Nelvana of the Northern Lights: I can say with terrific confidence that I know absolutely nothing about Canadian cartoonist Adrian Dingle or this early superheroine -- that there was a prohibition on non-essential American products in Canada at the outbreak of WWII, prompting the creation of domestic comic books, is the extent of even my broad-picture historical awareness -- which is why I would probably feel great about looking through this 352-page latest among IDW reprint efforts, although I believe it's actually a second printing, following a Kickstarter-funded initial run. Official site; $39.99.

The Art of Richard Thompson (&) The Art of the Simon and Kirby Studio: And finally, a pair of art books for those unsatisfied with mere images in sequence. The Richard Thompson book comes from Andrews McMeel, a 224-page, 9" x 11.2" hardcover detailing the many interests of the creator of Cul de Sac through a series of conversations between Thompson and various fellow travelers (Bill Watterson among them), and lots of illustration samples. Simon and Kirby is Abrams, 384 pages at 9" x 12.25", finding Mark Evanier (whose 2008 overview Kirby: King of Comics is also getting reprinted this week) on a trawl through the archives with many originals and production items ready to be photographed; $35.00 (Thompson), $60.00 (Simon and Kirby). 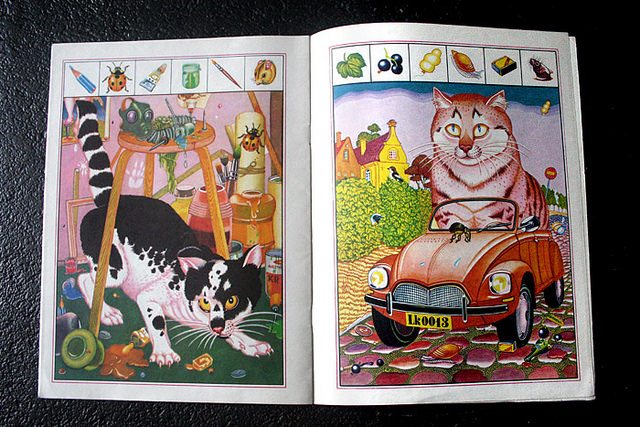 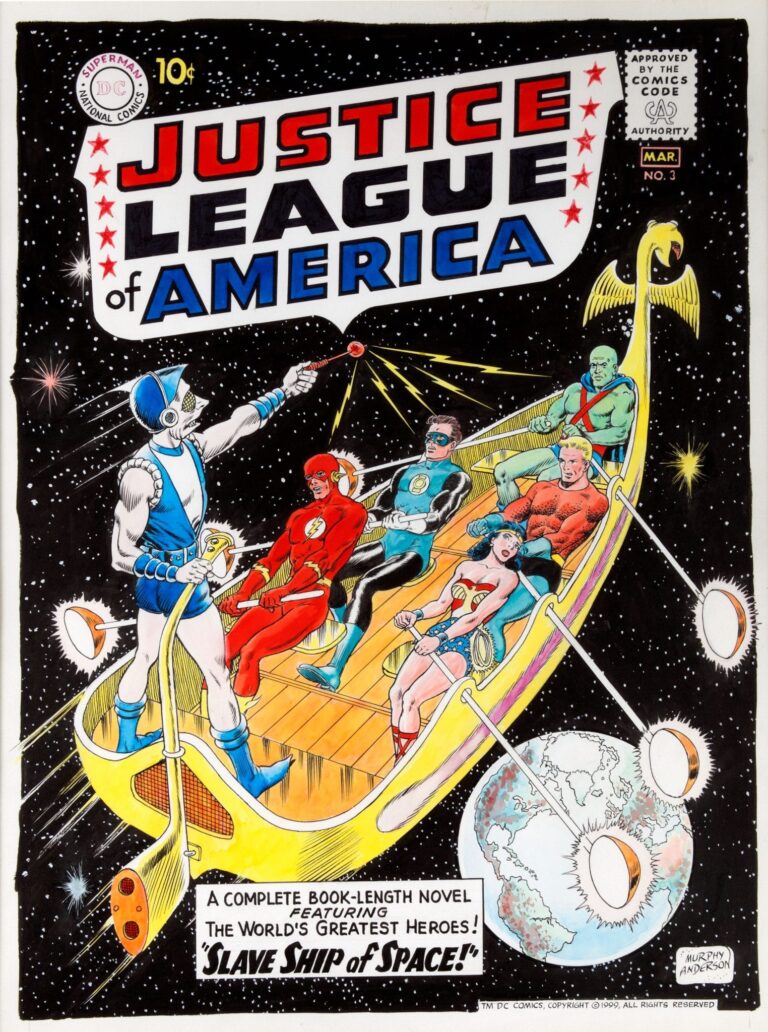