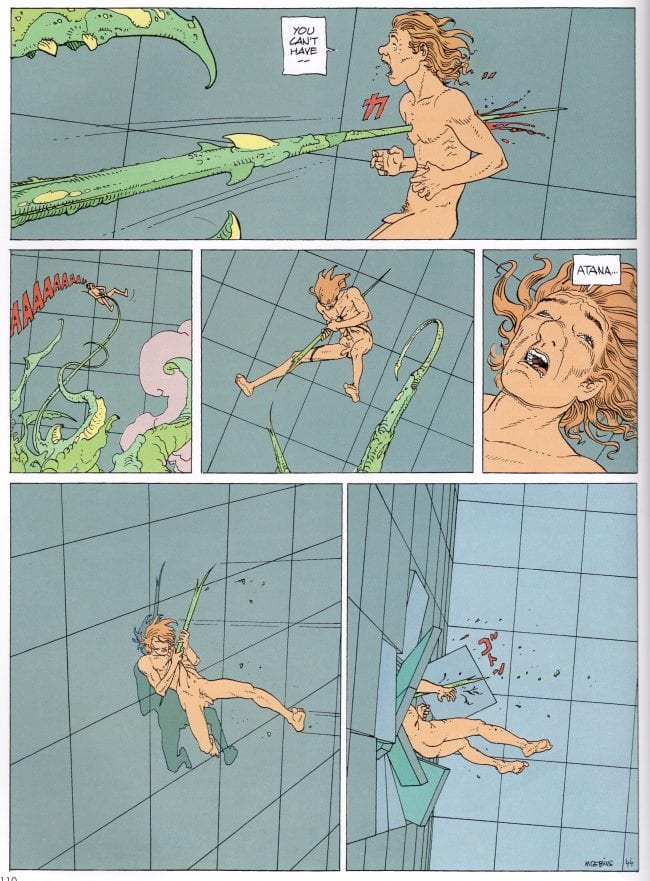 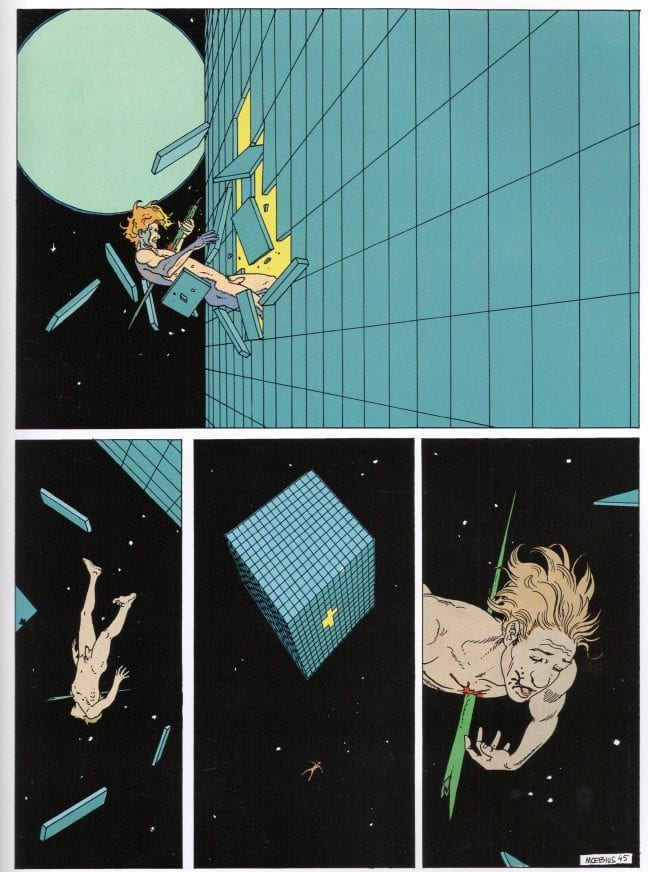 You know, I bet some people think I don't buy any of the comics I spotlight here. Well guess what, Buster Brown - time to google R.F. Outcault and learn what an apology looks like, because I totally did obtain a copy of Dark Horse's The World of Edena hardcover last week, and what you see above is some of my favorite Moebius shit. Written, drawn and colored by Gir, with new English lettering from Adam Pruett, from a new translation (in this segment) by Philip R. Simon. Of some interest are the coming attractions in the back of the book, which note that three volumes of Inside Moebius will be released in 2018; going by the cover art they're doubling up on the French editions, so that would constitute the entire series. It seems 2017's rollout will consist solely of an Edena series artbook, unless they have something else to announce... 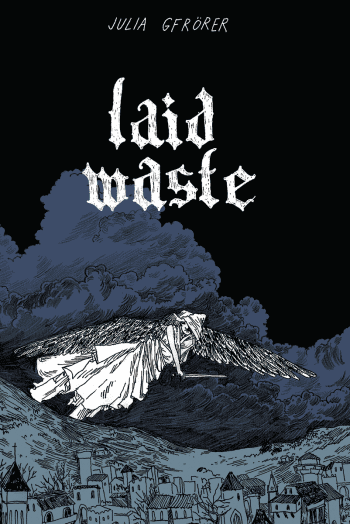 Laid Waste: Rarely do I encounter a perfect All Souls' Day comic, but Julia Gfrörer is a rare talent - wholly committed to a completely distinct vision and just going for it over and over again. This 80-page softcover is her second book release with Fantagraphics, starting off with her (excellent) contribution to the recent Kramers Ergot 9 and swelling in scope to survey love and pus and sex and bread in a time of plague, the lessons of martyred Saints readily at hand and the end of the world less feared than assumed. Perhaps the artist's most elliptic and delicate work, speaking well of her continued evolution. I liked it; $14.99. 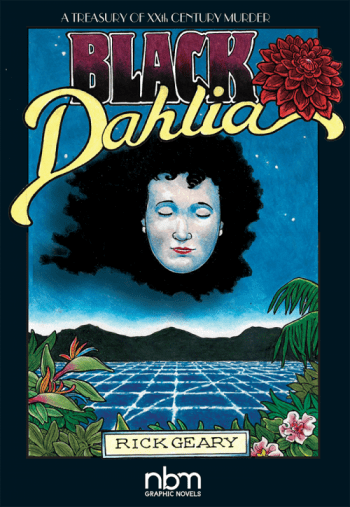 A Treasury of XXth Century Murder: Black Dahlia: And here's some b&w alt-comics of an older stock, the straw-thatched latest from Rick Geary, again exploring the facts behind a notable killing. This one has been very well-covered by all manner of media, but maybe not with the exceedingly detail-focused drollery that Geary tends to bring to these things. From longtime publisher NBM, an 80-page b&w hardcover. Samples; $15.99.

Cerebus in Hell? #0: It's 2016 and Cerebus has been R E C O N T E X T U A L I Z E D. Yes, this is a new Cerebus comic from creator Dave Sim and Aardvark-Vanaheim, released in anticipation of the series' 40th anniversary next year, but instead of a long serial it's a set of humorous one-pagers inspired by David Malki's webcomic Wondermark, which repurposes century-old art for humorous juxtapositions with original dialogue. As such, Sim teams with Sandeep Atwal (a longtime production guy and A-V's director of communications) to position the ill-tempered earth pig, condemned to live eternally as clip art within the Inferno of Dante Alighieri, amidst all manner of contemporary discourse. To be followed by a four-issue miniseries in 2017, though you can read some web installments now; $4.00.

Prophet: Earth War #6 (of 6): Not 300 issues, but still a long time coming - few mainstream superhero revivals of the past decade have met with such fulsome praise as 2012's Brandon Graham-fronted Image recalibration of the 1990s Rob Liefeld creation, previously known pretty much only for the madly excessive art of Stephen Platt. Under Graham, Simon Roy, Giannis Milonogiannis and others, it became a cosmos-spanning saga of far-future clones and esoteric civilizations, and now the principals come together one last time. I mean, on this property - they didn't die or anything; $3.99.

Motor Girl #1 (&) Motro #1: New comic book series with weirdly similar titles, both from established creators. Motor Girl is the work of Terry Moore, specialist in long series like Strangers in Paradise, Echo and Rachael Rising. It's a SF thing about a woman who becomes an interstellar destination mechanic for UFO repair, from Moore's own Abstract Studios. Motro comes from Ulises Fariñas, combining some pages drawn in his early 20s with contemporary work to tell the life's story of a very strong boy growing up uneasily in a violent fantasy world. Written with Erick Freitas and colored by Ryan Hill, published by Oni Press; $3.99 (each).

Pussycat: The Complete Comics: One of the nice things about a multimedia franchise like The Smurfs is that it occasionally justifies deeper dives into the catalog of its creator. Hence, this 8.8" x 11.3", 192-page NBM/Papercutz hardcover collection of mostly-wordless and super-cute feline humor strips from Peyo, who created the feature in the late 1940s for the daily newspaper Le Soir. It seems that these color comics, however, are later works from the pages of Spirou, compiled in album format in the 1970s (and drawn in not-insignificant part by a Peyo studio assistant, Lucien De Gieter). Note also that a Dupuis collection of this work from two years ago was 416 pages in landscape format - I presume the present English edition has been reoriented; $19.99.

The Trial of Roger Casement (&) Muhammad Ali: Two new ones of the biographical nonfiction approach. The Trial of Roger Casement is an original 120-page SelfMadeHero graphic novel from artist Fionnuala Doran (her bookshelf debut), examining the human rights activist and Irish nationalist hanged for treason in London during WWI. Muhammad Ali is a 128-page Dark Horse hardcover, essaying the sports notable in translation from a 2015 French release by Sybille Titeux & Améziane Amazing; $19.95 (Casement), $19.99 (Ali).

The Ghost and the Lady Vol. 1 (of 2) (&) A Distant Neighborhood: HISTORICAL MANGA! I MEAN, IN TERMS OF SETTING! The Ghost and the Lady is a 2014-15 series from Kazuhiro Fujita, creator of '90s-origin shōnen superhits like Ushio and Tora and Karakuri Circus. He had an entire episode of Naoki Urasawa's Manben show dedicated to him in Japan, though I believe this 304-page item is actually his solo book-format debut in English translation - it's a seinen project from publisher Kodansha's weekly Morning magazine, and technically part of an irregular anthology, "The Black Museum", which finds Fujita doing dark fantasy comics in a British setting. Florence Nightingale(!) is involved with supernatural happenings, in what looks like a very odd story indeed. A Distant Neighborhood is a new all-in-one hardcover edition for the much-lauded 1998-99 Jirō Taniguchi series, a sentimental time-travel scenario created for the aging readers of Big Comic magazine, and eventually the basis for a 2010 film from Belgian director Sam Garbarski. Fanfare/Ponent Mon has previously released the work in two softcover volumes, but their 404-page omnibus promises new color pages; $19.99 (Ghost), $28.00 (Neighborhood).

JoJo's Bizarre Adventure Part 3: Stardust Crusaders Vol. 1 (of 10): VINTAGE MANGA! I MEAN, IN TERMS OF AGE! Through a mix of constant anime broadcasting and vigorous online memefication, Hirohiko Araki's long-running adventure series-cum-personal life quest JoJo's Bizarre Adventure has achieved a level of viability-in-translation unusual to a franchise consisting of over 100 collected volumes. VIZ has been sourcing its hardcover English editions from fatter, 21st century Japanese collected books, though, and the such-formatted debut of Stardust Crusaders -- perhaps the quintessential JoJo's storyline, hailing from 1989-92 -- commemorates the moment where the new initiative begins revisiting content from VIZ's *last* attempt at a JoJo's translation, which ran from 2005-10 in softcover. It's 280 pages, a few in color; $19.99.

Beyond Time and Again (&) Red Barry Vol. 1 (of 2): Undercover Man (&) Walt Disney's Treasury of Classic Tales Vol. 1: A trio of reprint projects for unique artists. Beyond Time and Again is a 48-page, 12" x 9" landscape softcover from Fantagraphics, dedicated to a late '60s underground newspaper strip by George Metzger, creator of outre fantasy comics like Moondog (Print Mint, 1969-73) and MU: The Land That Never Was (Kitchen Sink, 1978). "[C]ombining high fantasy with prescient views of science, climate change, and political authoritarianism," says the publisher. Red Barry was a straight newspaper strip that ran from 1934-38, an undercover police serial launched to capitalize on the success of Dick Tracy. The artist, Will Gould (no relation to Chester), did not stay all that long in comics, which has made the unique qualities of his drawing all the more compelling to certain readers. IDW publishes the 284-page hardcover at 11" x 8.5". The same publisher handles Walt Disney's Treasury of Classic Tales, which I am mentioning here because some of these Dell adaptations were drawn by Jesse Marsh, and I know a bunch of you like Jesse Marsh; $25.00 (Beyond), $49.99 (Red and Disney).

Absolute Batman: Year One: An unusual entry in DC's series of super-deluxe oversize slipcased classics, insofar as it specifically explores the issue of 'remastered' coloring - a fraught topic indeed in vintage reissues. There's going to be two 9.7" x 14.9" hardcovers included. The first will feature what the publisher deems "the recolored version of the story from previous collected editions, remastered with new, high-resolution scans of the original coloring by David Mazzucchelli and Richmond Lewis" - I presume, at least in part, to address Mazzucchelli's complaints regarding the quality of prior reprint editions. The second volume will dive further into the area of facsimile, reprinting "the original 1987 version of the story as it ran in BATMAN #404-407, reproduced from scans made by Mazzucchelli and Lewis from the printed comic book pages, presented on stock that simulates the look and feel of the original comics." You can also expect Mazzucchelli's pencil breakdowns for the entire story, and the full scripts from writer Frank Miller, in what will *have* to be the most heavily-adorned edition of this blood 'n thunder genre institution; $125.00.

CBLDF Presents: Liberty Annual 2016: Finally, Image presents the newest benefit item for the Comic Book Legal Defense Fund, this time a themed anthology of nonfiction shorts on the topic of "Great Heroes". Artists like Ronald Wimberly (again) and Shannon Wheeler are involved, but I'd be on the lookout for a piece by Mary M. Talbot & Bryan Talbot, basically to see if they've put together a new comic on anarchist Louise Michel or if we're going to get an extract from their formidable bio comic The Red Virgin and the Vision of Utopia from earlier this year; $4.99. 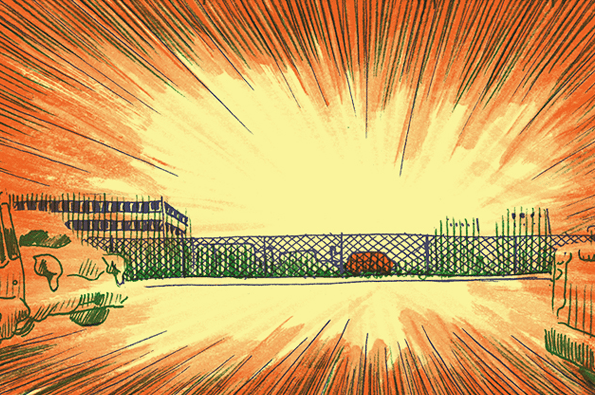 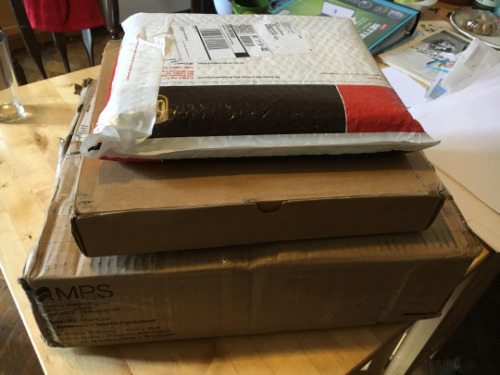