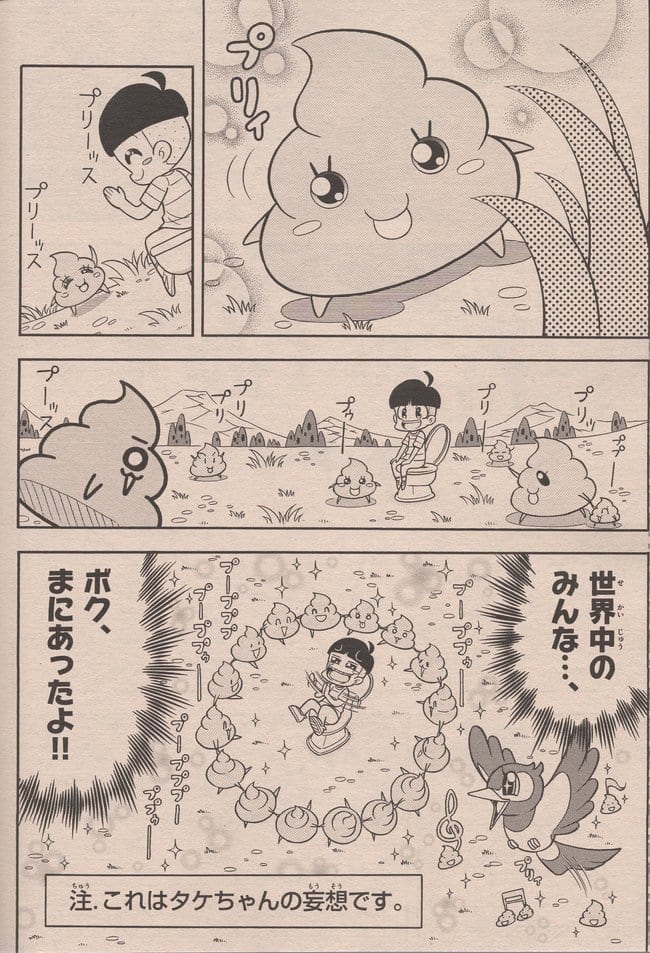 I prefer comics that capture the fundamentals of life, and what could be more immediate than the scene depicted here by Kazuhiko Sugitani, from the pages of his children's comic Majin Noodle? Concerning a demon god who lives in a cup of ramen and stows away to school by assuming the form of a boy's underpants, this episode of Majin Noodle unites the critical elements of Japanese comics for younger boys -- poop, underpants, genitals, screaming -- into alchemical unity. I especially appreciate the Tezuka-like bird in the final panel - do creatures like that even exist anymore outside of parody...?

PLEASE NOTE: What follows is not a series of capsule reviews but an annotated selection of items listed by Diamond Comic Distributors for release to comic book retailers in North America on the particular Wednesday identified in the column title above. Be aware that some of these comics may be published by Fantagraphics Books, the entity which also administers the posting of this column, and that I also run a podcast with an employee of Nobrow Press. Not every listed item will necessarily arrive at every comic book retailer, in that some items may be delayed and ordered quantities will vary. I have in all likelihood not read any of the comics listed below, in that they are not yet released as of the writing of this column, nor will I necessarily read or purchase every item identified; THIS WEEK IN COMICS! reflects only what I find to be potentially interesting. 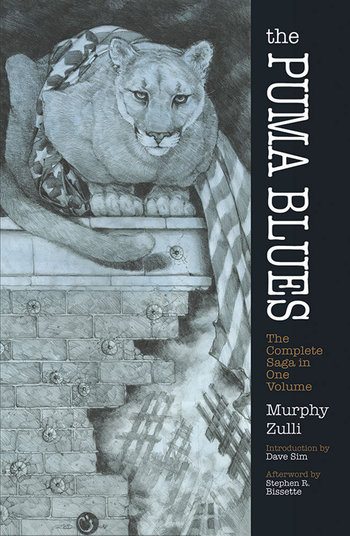 The Puma Blues: The Complete Saga in One Volume: In the annals of '80s b&w boom comics, few titles ennobled the promise of free experimentation within genre parameters quite like The Puma Blues. Initially published by Aardvark One International, and later Mirage Studios -- thus placing it in proximity with two of the period's most enduring successes, Cerebus and Teenage Mutant Ninja Turtles -- the series functioned less as a means of delivering SF plot information than communicating themes of ennui, isolation and ecological peril through varied uses of words and pictures, as if writer Stephen Murphy and artist Michael Zulli were mainly concerned with deciding what comics should even be. The results were not always superb, but the process remains fascinating to observe. This 576-page Dover hardcover collects the entirety of the effort, 1986-89, along with an all-new 40-page final episode and supplementary texts by Dave Sim and Stephen R. Bissette. Note that issue #20 of the original series was a multi-artist special released in the wake of a distribution controversy - it appears that Alan Moore's (excellent) contribution to that issue with Zulli & Bissette will be included here, although I don't know about the rest of the package; $29.95. 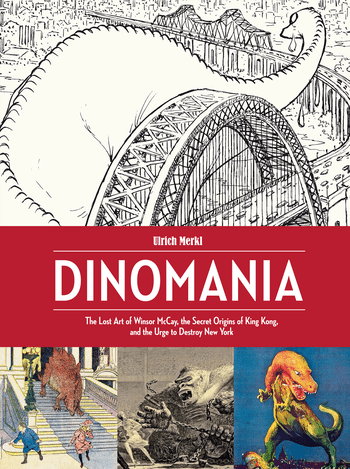 Dinomania: The Lost Art Of Winsor McCay, the Secret Origins of King Kong, and the Urge to Destroy New York: Some years ago, editor/publisher Ulrich Merkl released Dream of the Rarebit Fiend (2007), an enormous comprehensive edition of Winsor McCay's greatest comics work - it was the product of over half a decade's labor, and came accompanied by a selection of unusual critical writings bent in considerable part on teasing out McKay's influence upon the greater world of art and culture. It was a fascinating and eccentric affair, if somewhat befuddling, and this 304-page Fantagraphics tome looks to be a spiritual sequel: an 11.75" x 16" hardcover built around depictions of dinosaurs from throughout McCay's career, while also " trac[ing] our love of dinosaurs and monster movies down through the decades." Never-reprinted comics taken from McCay's original art are promised among the flood of information. Samples; $95.00.

New Construction: Two More Stories: Being Uncivilized Books' second collection of shorts by Sam Alden, among the most widely admired of prolific young cartoonists. This one pairs two stories about familial units from 2013 - Backyard, about anarchist housemates and human transformations, and Household, about troubled siblings. At least one of these pieces has been newly expanded for these 188 pages, so if you've seen 'em online, you've not quite seen it all; $17.95.

Shigeru Mizuki's Hitler: THAT'S MY HITLER! Or, rather, it's manga giant Mizuki's, as depicted in a 1971 serial from the (now-defunct) weekly seinen magazine Manga Sunday. Expect something far closer to the sensitive doodles of Onward Towards Our Noble Deaths than the thicker ovular drawings more readily associated with Mizuki's releases through Drawn and Quarterly - some pretty great photo-derived background smears in here too. A 296-page softcover, with an introduction by Frederik L. Schodt; $24.95.

Filmish (&) Graphic Freud: Hysteria: A pair of nonfiction, indeed educational books from SelfMadeHero, distributed in North America via Abrams. Filmish is a 200-page work by Edward Ross, "using comics to uncover the magic and mechanics behind our favourite movies." As always, I will be grading the work exclusively on mentions of Doris Wishman. Hysteria is a new book from Oscar Zárate, reuniting with writer Richard Appignanesi (of the Introducing... series of educational comics) for a 168-page account of Sigmund Freud’s early career; $24.95 (each).

Quit Your Job and Other Stories (&) Sunbeam on the Astronaut: Two from the longstanding and respected Alternative Comics. Quit Your Job reissues one of the publisher's seminal works, James Kochalka's 1998 fable of shirking responsibility to discover, yes, what really matters. Note that this expanded edition also includes the artist's 1997 book Paradise Sucks, along with some other stuff. Sunbeam on the Astronaut, meanwhile, is a newer release, a 56-page collection of comics and illustrations by psychadelic artist Steven Cerio; $19.95 (Quit), $9.95 (Sunbeam).

Our Expanding Universe: Another enormous indie comics success of the late '90s was writer/artist Alex Robinson's Box Office Poison, an expansive dramedy of household sentiment and comics industry inequities that I confess has never been to my taste, though I suspect there remains a wider appetite. This 256-page Top Shelf original is purportedly a 'spiritual sequel', following a group of urban chums as they deal with parenthood and other challenges. Preview; $19.99.

101 Artists to Listen to Before You Die: Not actually one of those dictatorial list books, but a 236-page color diary comic from Spanish artist Ricardo Cavolo, laying down his personal tastes in world music via "colourful illustrations and handwritten text, lists, notes and personal anecdotes." A Nobrow release; $22.95.

Batman: Europa #1 (of 4): This is a superhero comic that was first announced in 2004, which means children conceived in the fervor of the original press release are now probably smoking cigarettes. Nonetheless, I highlight its 40-page debut here for the pairing of layout artist Giuseppe Camuncoli and finisher Jim Lee, the latter working with frequent colorist Alex Sinclair, but without the inker (Scott Williams) who's helped define his exceedingly influential style throughout the years. Subsequent issues will see other artists working from Camuncoli's layouts, as Batman teams up with the Joker to stop a viral threat out on the continent. Written by Matteo Casali & Brian Azzarello. Preview; $4.99.

Usagi Yojimbo #150: No anniversary fireworks for Stan Sakai, just a self-contained 24-page comic book about the bunny swordsman's encounter with a European traveler eager to suck touristy glee from matters of indigenous life and death. From Dark Horse, as usual. Preview; $3.50.

Michael Allred: Conversations: And finally, your book-on-comics of the week - another University Press of Mississippi hardcover compendium of interviews, this time a 192-page volume dedicated to the veteran popular genre artist, whose works have ranged from self-started multimedia ventures to in-the-trenches superhero illustration. Edited by Christopher Irving; $40.00.

This week's front page image is from artist Ryouhei Oosaki's video game tie-in manga Animal Crossing: New Leaf: Harikiri Mayor Ippe! - just another elementary school comic about a man clasping objects between his ass cheeks, to the delight of all. 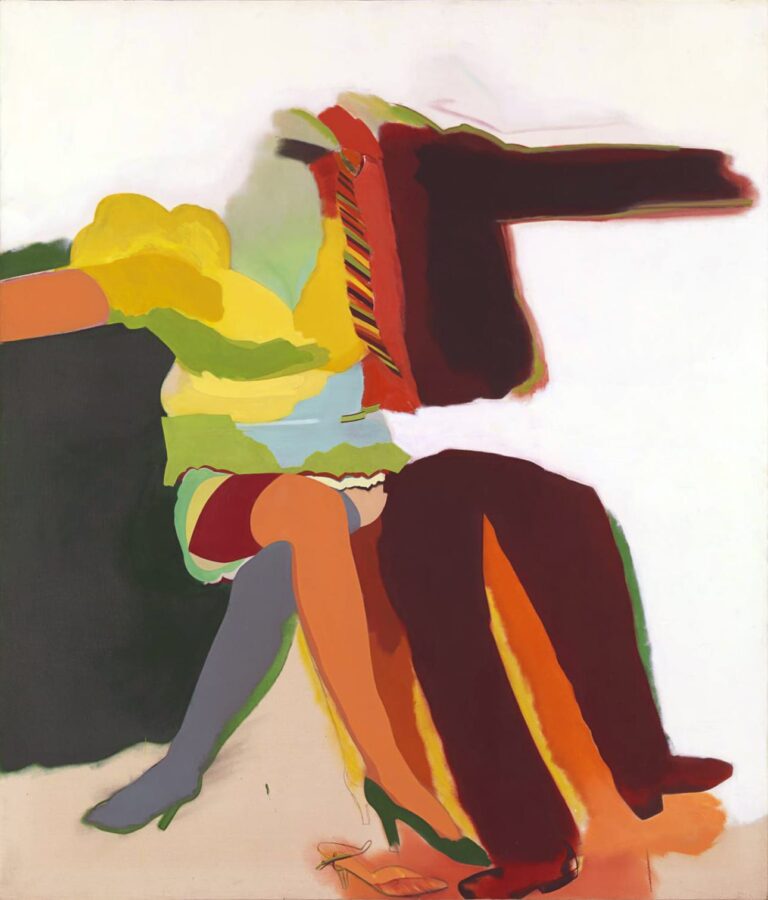 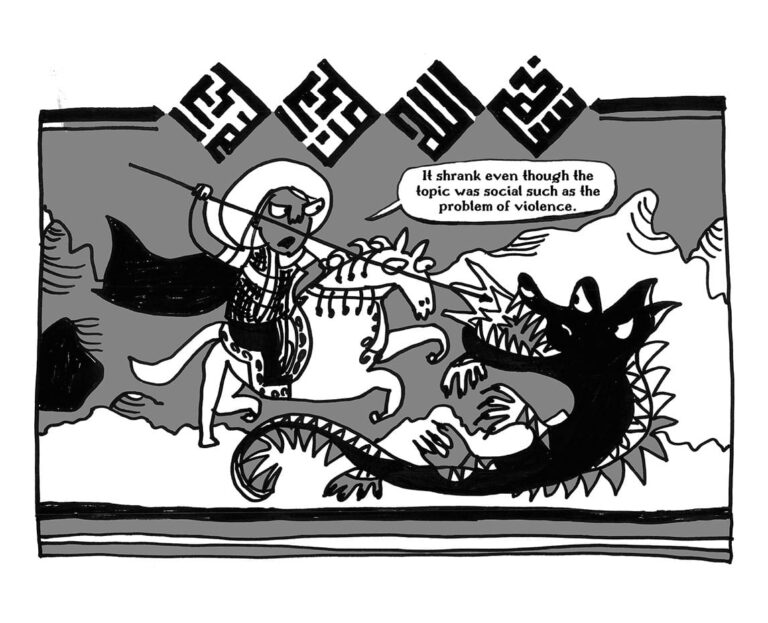