THAT'S FUCKING RIGHT SANDY, YOU THINK YOU'RE SHIT? YOU THINK YOU'RE HARD, LITTLE BREEZE? CAUSE YOU'RE NAMED AFTER MY GRANDPA?! YOU CANNOT STOP THE ONSLAUGHT KID, I AM POWERING THE INTERNET BY MOTHERFUCKING CANDLELIGHT AND A BAKER'S DOZEN OF HAMSTERS IN A COMPLICATED SYSTEM OF GODDAMNED WHEELS, AND I'VE GOT PEOPLE WAITING. GOOD, REAL PEOPLE EXPECTING EIGHT TO TWENTY-FIVE HAND-SELECTED COMIC BOOK RECOMMENDATIONS BASED ON NOTHING BUT HUNCHES AND BIAS. HUNCHES AND BIAS, SANDY, THAT'S HOW WE WRITE THE CAPTIONS BY LAND OR BY SEA, AND NOTHING wait I'm leaning on the shift key.

God, I can't see anything. Too bad my laptop died. I wonder if these keystrokes are getting through to anyone? Is anyone left?

Or am I summarizing comic books... INTO THE ABYSS?? 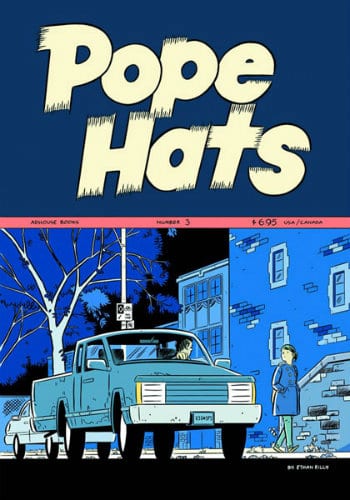 Pope Hats #3: Seriously though, all of you stuck in the storm center with yr correspondent/his editors might want to check with your local comics shop to make sure their windows haven't burst open or the UPS truck didn't sink, or that people were able to arrive at work to collect or unpack the comics prior to Wednesday. If so, the first order of business would be to sniff out this latest AdHouse-published issue of the old-school one-man anthology-type 40-page Alternative Comic Book with a Letters Column and Everything by Ethan Rilly. Included are new updates on the lives of over-analytic law clerk Frances and her irresponsible (and altogether happier) roommate Vickie, as well as palace intrigue in the law office. Bonus stuff too. Really funny, observant slice-of-life stuff, drawn with elan. Preview; $6.95. 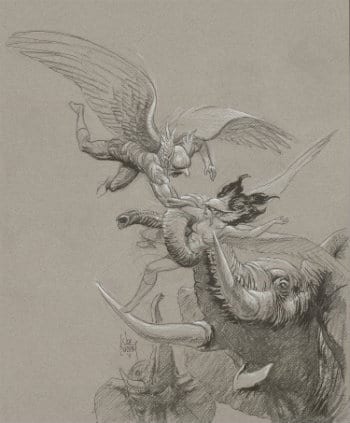 Joe Kubert Presents #1 (of 6): *EDIT* Owing to a comment below by Pete Carlsson -- who has a bit of text commentary published in this 48-page collection of comics by Joe Kubert & co. -- I've changed this blurb to merely state the participation of Kubert, Brian Buniak and Sam Glanzman in what is now inescapably a memorial for the longtime comics veteran; $4.99.

Hereville: How Mirka Met a Meteorite: Being a 128-page sequel to 2010's Hereville: How Mirka Got Her Sword, a well-received compilation/revamp of a YA-friendly webcomic by Barry Deutsch concerning a young girl's exploits steeped in Judaic tradition. This time, the intervention of witchcraft sees the girl of the title faced with a doppelganger who vows to excel in all wanting areas of the heroine's life. This was also a subplot Osamu Tezuka's Barbara, oddly enough, although I expect the action here will be more middle school appropriate. The publisher is Abrams' Amulet Books. Preview; $16.95.

August Moon: I am unfamiliar with the work of Indonesian-born, Australia-based artist Diana Thung, but she's bringing a slick, bulbous b&w approach (kind of a 'friendlier' Taiyō Matsumoto deal) to this 320-page, Top Shelf-published tale of a young girl who encounters supernatural mysteries in her new town. Preview; $14.95.

Colony: Another Australia, and another legacy, this time concerning the late Dick Giordano, whose final original comics work was a webcomic written and inked by Bob Layton. This 164-page IDW softcover collects/completes that serial, a sci-fi version of the foundation of the eventual federation, seeing a man condemned to a penal colony in outer space; $24.99.

Abelard: Last year NBM released Bubbles & Gondola, "an odd little book" from Renaud Dillies which our own Rob Clough considered here. I have not yet had the opportunity to read it, but Dillies' Herrimanesque art looks very nice. This is his new release from the same publisher, a 128-page everything-so-far compilation of a French series created with writer Régis Hautière, about a lil' chick that tries to impress a woman by capturing the moon. Preview; $22.99.

Through the Walls: ALSO EUROPEAN - your latest all-in-one collection of an unfamiliar French series from Humanoids, this time a 96-page, 8.5" x 11" hardcover compiling "droll vignettes" about folks who can walk through walls. I sort of recognize artist Stéphane Oiry as involved in Humanoids' old Image-partnered Lucha Libre series, although I believe the writer, Jean-Luc Cornette, is making his English-translated debut. Samples; $29.95.

The Metabarons: Ultimate Collection: Being Humanoids' latest all-in-one edition of Alejandro Jodorowsky's finest hour as a comic book writer, a 544-page, 7.7" x 10.5" hardcover with a new introduction by Matt Fraction. Juan Giménez draws this inter-generational account of a caste of super-warriors that become increasingly numb from the burdens their parents placed upon them; can anything shatter the cycle of abuse? Purple, feverish, and weirdly moving by the time it all wraps - good to have it back in print. Samples; $59.95.

Absolute Final Crisis: Also in large and (increasingly) expensive compilations is this 480-page, 9" x 15 1/2" slipcased edition of a Grant Morrison-written 2008-09 superhero crossover event, possibly the single weirdest, most cerebral example of such in genre history, although that doesn't necessarily make it a superior work. I tend to slot Final Crisis in with Batman: R.I.P. as representative of a particular era in Morrison's superhero career where the emphasis on Ideas! in his work entirely overpowered considerations of satisfactory drama. That's not to say Final Crisis is all that hard to understand -- I mean, provided you read the Morrison-written tie-in issues he used as de facto additional issues of the main series, all of which are included here -- but that the storytelling eventually becomes fragmentary and notional enough that the occasional zip of its presentation can't compensate for the ad hoc, well-here's-what-needs-to-happen nature of its plotting, and that's when space isn't wasted on dull fight scenes by various artists which do tend to sap one's energy for mounting the argument that it's all a breakthrough for literary modernism in genre comics or whatnot. I got the impression I might as well be flipping through Morrison's notebooks, although the work does have some extremely vocal defenders, and they will want to see the seven new story pages (drawn by Doug Mahnke) advertised for this edition; $99.99.

Night of the Living Dead: Aftermath #1: Oh right, it's Halloween. The wind is howling outside my window pretty hard right now, so I guess I'll lay down a seasonal pick with this latest Avatar-published revival of the George Romero zombie concept, an ongoing series notable at the moment for scripts by David Hine of The Bulletproof Coffin. Art by one German Erramouspe, in what appears to be his North American penciling debut. Preview; $3.99.

B.P.R.D. Hell on Earth #100: And speaking of horror! If you pay close attention to the inside-front covers of comics books like I always do, you'll notice that most of the Hellboy-related miniseries have a little "Number xx In a Series" designation tucked away to keep track of how many total comics have accumulated, since most of these things function as 'ongoing' series anyway, just with catch up periods for the creative team built in at the end of every storyline so readers won't get antsy over lateness. But now it seems B.P.R.D. has built up enough sheer content that it's probably a better editorial/promotional bet to flaunt the longevity of the concept, hence this gala issue #100, which unfortunately lands smack in the middle of a continuing story arc, so it's probably not a great jumping on point. The artist at the moment is Tyler Crook, with James Harren picking up in #103; the writers, of course, are Mike Mignola & John Arcudi. Note that the current B.P.R.D. 1948 miniseries is not being counted as part of the 'official' series, although future one-offs and guest shots will likely be incorporated into the monthly run. Preview; $3.50.

Ghosts #1: But if the chills you crave are the sort only a longstanding imprint of a mainline superhero publisher can provide, know that Vertigo has prepped an 80-page bumper anthology boasting art by Joe Kubert, Gilbert Hernandez, Jeff Lemire, Rufus Dayglo, John McCrea and others, with stories by the likes of Geoff Johns (c'mon, who doesn't want to see him do some straight horror?), Paul Pope and Al Ewing; $7.99.

Lot 13 #1 (of 5): I'll flip through it just for the art no. 1 - a new Steve Niles-written DC miniseries with art by Glenn Fabry, favorite of connoisseurs of grotesqueness; $2.99.

Masters of the Universe: The Origin of Skeletor: I'll flip through it just for the art no. 2 - a licensed project from DC sporting the visual stylings of Frazer Irving, whom I know can put together a mean-ass skeleton, cloak or not. Script by Joshua Hale Fialkov; $2.99.

Teenage Mutant Ninja Turtles Annual 2012: IDW says this is the first time in close to two decades that co-creator Kevin Eastman has written and drawn an entire Ninja Turtles comic (Tom Waltz is credited as co-writer, though), so readers of a certain generation may log this 48-page special in the 'treat' column; $8.99.

CONFLICT OF INTEREST RESERVOIR: How many can I finish before the walls collapse? Among the conflict selections I'll first mention The Cartoon Utopia, a 144-page "part sci-fi, part philosophy, part visual poetry, and part social manifesto" hardcover by the always-interesting Ron Regé, Jr.; $24.99. Lilli Carré returns after 2008's The Lagoon with Heads or Tails, a 200-page collection of short stories; $22.99. Fans of the old, influential genre stuff will enjoy Corpse on the Imjin! and Other Stories (240 pgs.) and Came the Dawn and Other Stories (208 pgs.), two b&w collections of EC material focused on, respectively, Harvey Kurtzman and Wally Wood; $28.99 (Corpse), $24.99 (Dawn). Finally, The Last Vispo Anthology: Visual Poetry 1998-2008 presents 336 pages of visual poetry to tickle your image/text fancy; $39.99.

Ho ho hope you enjoyed this spooooooky Halloween/active storm system edition of THIS WEEK IN COMICS!, which I trust has sufficiently undercut the gravity of the present situation. Hopefully I'll see you all on the other side, when the clouds part and the streets reopen. And if not, I'll always remember the lesson my funnies taught me: 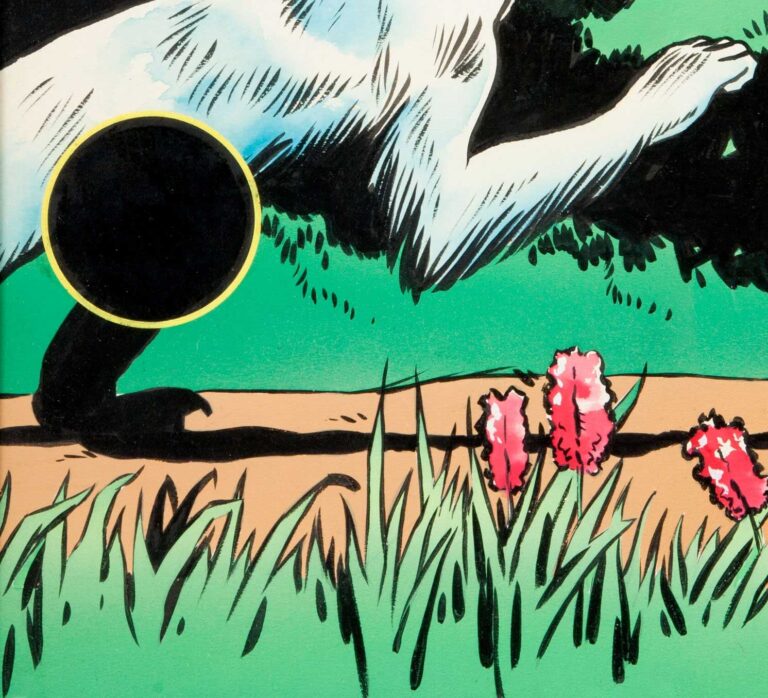 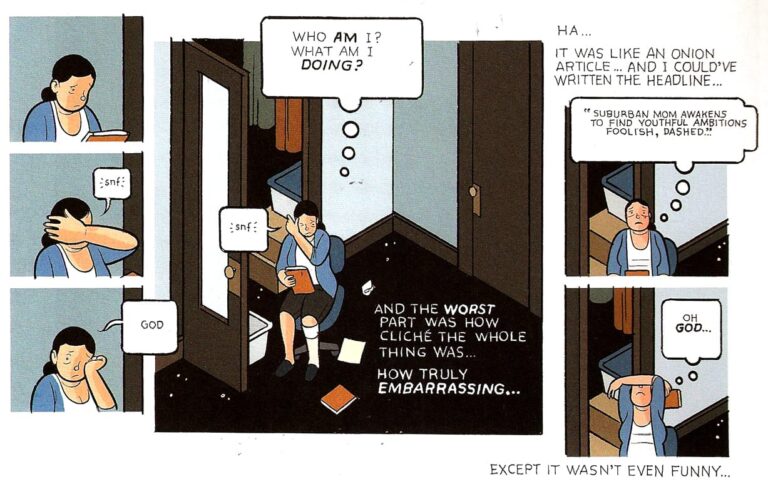 The Diagram of a Life