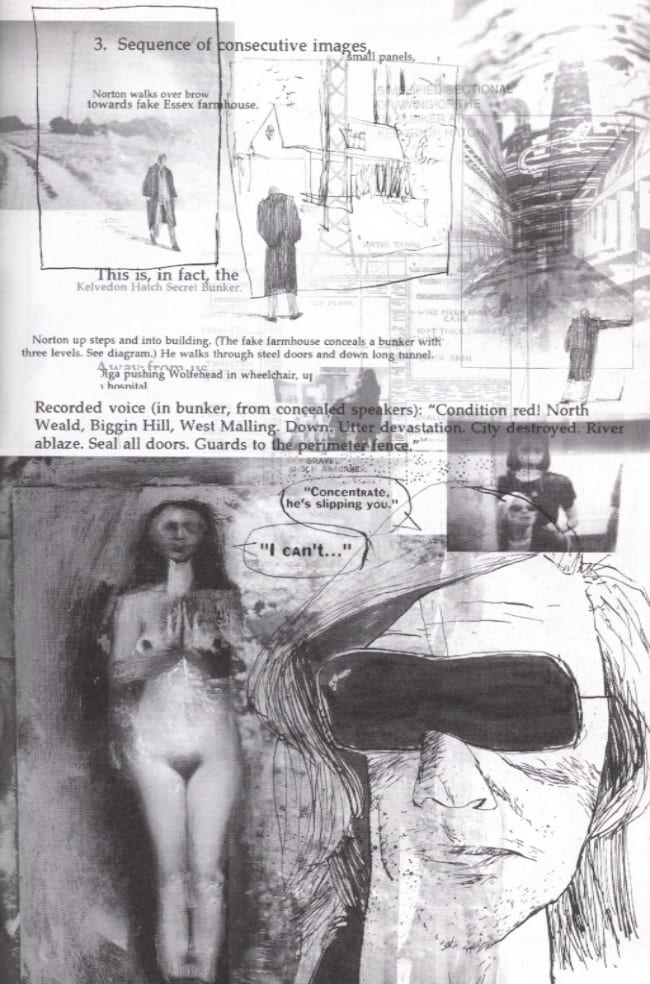 I was trying to find a scary image for Halloween, but what I found was a little-discussed collaboration - 1997's Slow Chocolate Autopsy, a story sequence by Iain Sinclair dotted with three comics collaborations with the book's designer, Dave McKean. Sinclair has left something of an outsized comics footprint through the work of Alan Moore, who drew from the former's Lud Heat in writing From Hell, although Sinclair's own work in the form is very limited; above we see a pretty characteristic sample, in which McKean chiefly seems concerned with devising typographical means of containing all of the poet's words on the page. As with the 'plain' text segments of the book, Sinclair's writing frequently breaks from direct narration to offer allusive summaries of characters and environments, flickering between present-sense impressions and omniscient scene-setting - given this approach, McKean's visuals (drawings, photos, type, etc.) become means of seizing the words in concrete settings. In the case of "The Double-Death of the Falconer", excerpted here, the result is a suspense piece not unlike a tremendously indirect issue of Hellblazer, with Sinclair's unstuck-in-time principal Norton acting as both protagonist and bystander, moving verily between the panels of chronological sequence. Moore and Kevin O'Neill would later stick Norton into The League of Extraordinary Gentlemen: Century with Sinclair's permission, positioning him as chiefly wizened among veteran comic book characters... 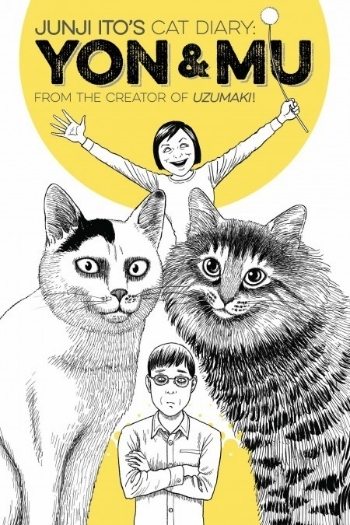 Junji Ito's Cat Diary: Yon and Mu: JUST IN TIME FOR HALLOWEEN, Kodansha brings a 2009 release from the horror comics icon - except instead of tales of terror, we're getting a slice-of-life comedy depicting the author's adventures as a catfather. Luckily, the engine of the humor is Itō's 'inappropriate' use of horror comics emphasis on largely tranquil domestic scenes, so it's *sort* of horror-ish anyway, or at least scarily raucous in a manner you'd expect from an Itō influence like Kazuo Umezu. A little short at 120 pages, but I found this hugely entertaining, both on a basic I-laughed level and also in appreciation of Itō's exceedingly handsome cartooning, which bounds from rubbery exaggeration to photo-based exactitude in a way his other projects don't quite allow. Preview; $10.99. 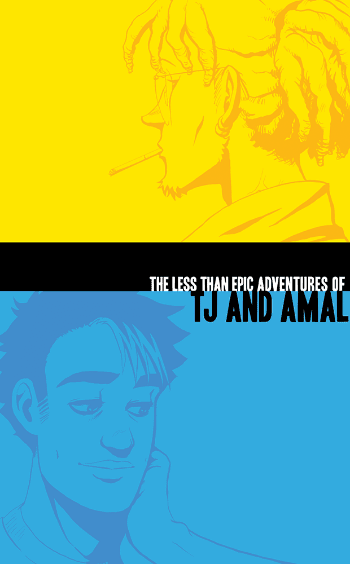 The Less Than Epic Adventures of TJ and Amal: I was not a reader of this 2009-14 webcomic from E.K. Weaver -- a technical illustrator whom I don't believe had published any prior comics -- but I am very much aware of its terrific popularity, most easily summarized by the enormous success of the crowdfunding effort for this comprehensive print edition, a 528-page toe-crusher from Iron Circus Comics. It's a romantic road trip serial involving men of different backgrounds getting to know each other - very much the kind of cartoon-realist drama that wouldn't seem out of place in the '90s self-publishing boom, but capable of reaching a less-encumbered audience through online means; $30.00.

SheHeWe (&) Hans Christian Andersen's The Red Shoes and Other Tales: Two new kid-friendly color comics from creators who've been at it for a while. SheHeWe is actually the third volume in a series writer Lee Nordling and artist Meritxell Bosch have going at Lerner - they're 32-page wordless comics that utilize nine-panel grids, with each tier following a different character whose storyline eventually interacts with the other characters/tiers. All the other books have animal characters, though, while this one introduces human children into the mix. The Red Shoes is the latest from the Scotland-based duo Metaphrog, a 64-page NBM/Papercutz hardcover pairing two Andersen adaptations ("The Little Match Girl" is the other one) with an original story. I would describe the Metaphrog look as 'imposing candy,' which is a roundabout way of saying you should flip through this; $6.95 (SheHeWe), $12.99 (Red Shoes).

Necessary Monsters Vol. 1: Another webcomic in print, this time from writer Daniel Merlin Goodbrey (one of the theorists engaged with the Alan Moore-fronted digital platform Electricomics) and artist Sean Azzopardi - "The Chain polices this world, a covert agency of killer monsters keeping the human herd from growing too thin," growls the solicitation. Published by Devil's Due/1First Comics, half of which is a new iteration of the 1980s Direct Market publisher First Comics, of American Flagg! and Nexus fame; $12.95.

Island #4 (&) From Under Mountains #2: Two from the offbeat fantasy wing of Image. Island is a continuing anthology, notable this month for featuring a new Pop Gun War story from Farel Dalrymple. From Under Mountains continues a longform saga from writers Claire Gibson & Marian Churchland, and artist Sloane Leong; $7.99 (Island), $2.99 (Mountains).

Gantz Vol. 37: This is the final installment of Gantz. Some have wondered if there would ever *be* a final installment of Gantz -- and relatively few of the people I know who used to groove on this all-indulgence Hiroya Oku violence, sex 'n gaming series are still following it, myself included -- but there's really no way this sort of ice-cold outer space robot art (as in, art that looks like it was made by a robot from outer space) could accommodate two series at once, and Oku's newer and similarly weird/funny/deeply-flawed/potentially indigestible cyborg superhero series Inuyashiki is presently running in translation with Kodansha. I've also been warned that I'll probably have no idea what's going on if I just dip in here to see how it ends, Gantz is like Naruto in that way, but maybe I'll do it anyway! From Dark Horse, as always. Preview; $13.99.

One-Punch Man Vol. 3: I've heard the anime adaptation of this comedic superhero manga is really good, although I haven't had any time to see it. The writer is ONE and the artist is Yūsuke Murata, and it may yet become one of the designated Japanese comics for people who don't read Japanese comics, if that means anything to you; $9.99.

P. Craig Russell’s Murder Mysteries and Other Stories - Gallery Edition: The 'Gallery Edition' is Dark Horse's version of IDW's Artist's Editions, which is to say pages are scanned in color directly from the original art, and presented at close to actual size. There is little doubt in my mind that Russell will benefit from this treatment, serving up 232 pages' worth of short pieces from all over his career, including adaptations of works by Oscar Wilde, H.P. Lovecraft, Clive Barker, Neil Gaiman and others. Samples; $125.00.

Overstreet's Comic Book Marketplace Yearbook 2015-2016: And finally, your publication-on-comics of the week - the newest 192-page squarebound annual from Gemstone, notable for a feature article on the history of Eclipse Comics, one of the bedrock early Direct Market publishers, with a hand in everything from magazines to graphic novels to European comics and manga. Also included is a huge-looking amount of superhero-and-related content, as perhaps should be expected, and also something about Dinosaurs for Hire, which was a late '80s/early '90s humor series written by Malibu Comics co-founder Tom Mason, who was also an art director with Amazing Heroes and early editor of the potential all-time most-obscure Fantagraphics anthology, Honk!, on which he was eventually succeeded by Joe Sacco. I'd pick the Corto Maltese variant cover(!); $12.95. 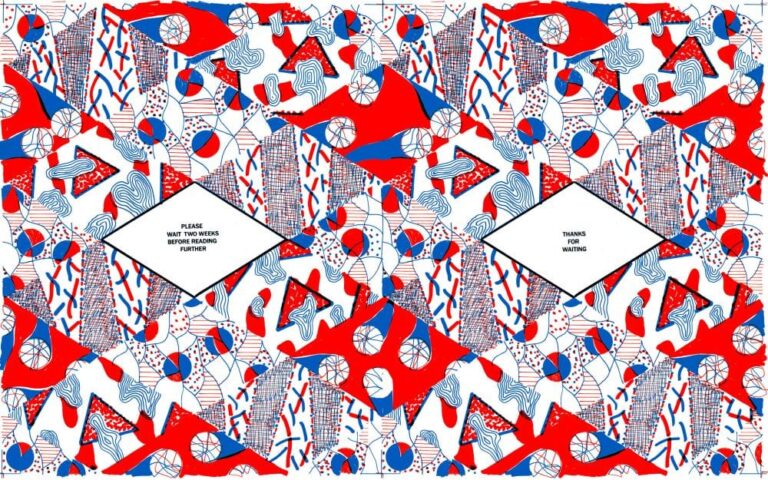