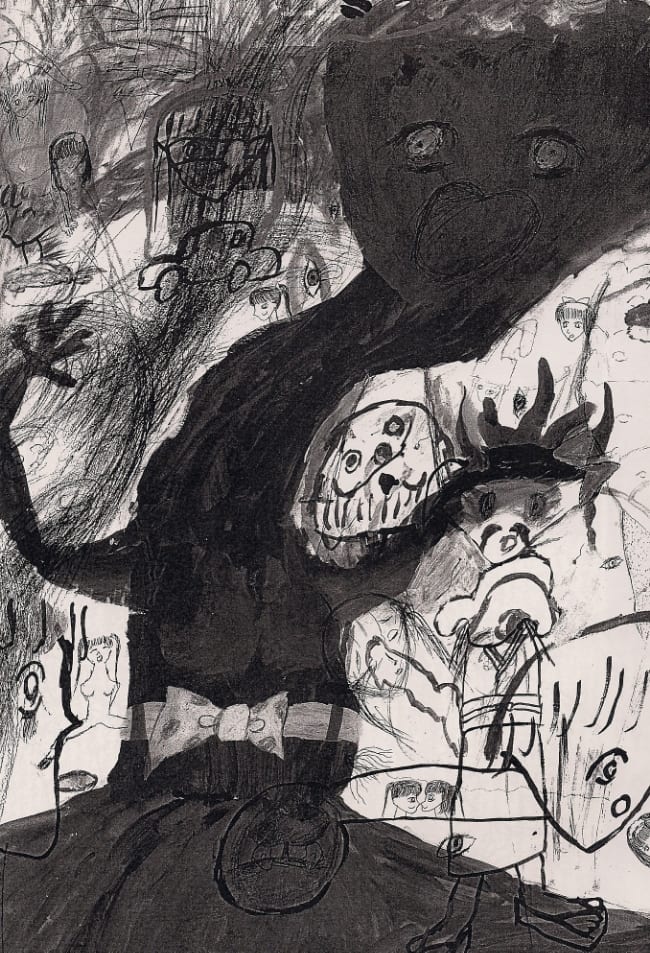 Last night I dreamt Steve Ditko was on trial; he looked exactly like Orson Welles and spoke in a highly theatrical manner. 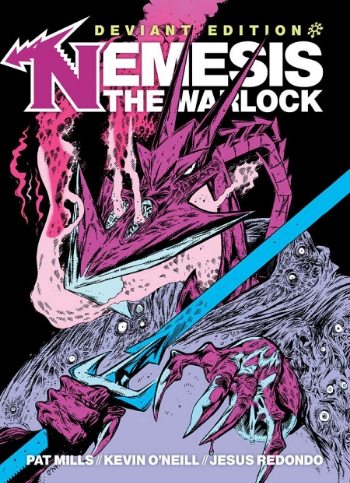 Nemesis the Warlock: Deviant Edition: I've been hearing more chatter than usual about this new Rebellion import, maybe because it marks a rare effort on the publisher's part - reprinting altered North American comic book versions of a popular serial. Specifically, these 240 pages compile the colorized variants of the first three books of Pat Mills' & Kevin O'Neill's anarchic fantasy series, a showcase for O'Neill's blossoming taste for chaos (with Jesús Redondo handling the middle chapter). It's notable because O'Neill's own colors will be on display, and I don't think he's colored anything longer than one page since Penthouse Comix in the late '90s. As a bonus, this 7.5" x 10.25" hardcover will also collect The Tomb of Torquemada, a 1994 poster comic not included with Rebellion's three-volume Nemesis compendium (albeit previously reprinted in a 2000 special issue of 2000 AD itself). Not as a poster, though - these are proper books. Samples; $48.00. 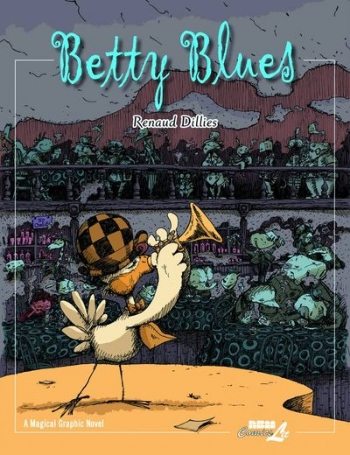 Betty Blues: Being the newest NBM translation of work by Renaud Dillies, an artist they've been pushing for a few years now with books like Bubbles & Gondola and Abelard (written by Régis Hautière). This one dates back to '03, depicting 80 pages' worth of a funny animal world full of heartache, booze and music - striking enough, it seems, to capture the Prix révélation at Angoulême. As always, the visuals are quite handsome, in that Herriman-meets-Sfar kinda way. Samples; $18.99.

It's been out in bookstores for a little while now -- hell, some comics stories might even have it already -- but keep your eyes peeled for Viz's new all-in-one hardcover omnibus for Junji Ito's Uzumaki, one of relatively few manga to pick up some heat as a popular comic in the months prior to the scene exploding in the early 21st century. There's also a bunch of Fantagraphics books that may or may not show up, including new Floyd Gottfredson and Steve Ditko collections, but none of 'em are actually on Diamond's list for release.

Summer Wars Part 1 (of 2): You will find few anime directors out there today boasting fiercer audience affection than Mamoru Hosoda; a veteran of the (weirdly talent-rich) Digimon franchise, Hosoda was initially tapped to direct Studio Ghibli's Howl's Moving Castle before finding the situation unworkable; he later directed a One Piece franchise film (the sixth, "Omatsuri Danshaku to Himitsu no Shima"), which many saw as allegorical for that period in his life, before embarking on a series of increasingly lucrative standalone works many have seen as Japanese animation's next best hope for shattering the constraints of 'anime' expectations and realizing a mass appeal otherwise near-exclusive to... Studio Ghibli. His most recent film, Wolf Children, will be out on North American home video later this month, and now comes Vertical with the first half of a 2009-10 manga adaptation of Hosoda's *prior* film, Summer Wars, a family togetherness saga involving trouble in a colorful online world. The artist is Iqura Sugimoto, who had a sci-fi/horror series titled Variante released way back in the days of DC's manga wing CMX, and we'll see how much of Hosoda's crisply emotive poppiness she can preserve; $14.95.

Valérian Vol. 4: Welcome to Alflolol: Being your periodic reminder that Cinebook is still chugging along with these translations of trendsetting SF comics by Pierre Christin & Jean-Claude Mézières, this one a 1972 album about native inhabitants seeking to retake an industrialized planet. There's actually a bunch of imports from the same publisher this week, including some really early Edgar P. Jacobs Blake and Mortimer and glossy millennial action with Largo Winch. Preview; $11.95.

Misery City: Yet while French and Belgian comics are typical enough in English -- never exactly popular, most of the time, but more frequently present than maybe ever before -- it is rarer to see a Greek-originating project appear in shops. Nonetheless, that is what writer Kostas Zachopoulos and artist Vassilis Gogtzilas have brought via UK publisher AAM/Markosia, which has been steadily releasing digital chapters in advance of this 128-page print compilation. It's about a private eye taking on supernatural cases in Hell. Sam Kieth has been complimentary about Gogtzilas' art -- I think he might have an foreword in here or something -- and it resembles the sort of doodled/textured stuff I associated with IDW post-Ben Templesmith for a while. Preview; $17.99.

Pretty Deadly #1: Image! They're gonna keep the creator-owned serial genre comic book alive in the front of Previews if it kills 'em! And this one's a particularly anticipated exhibit, teaming accomplished Marvel superhero veterans Kelly Sue DeConnick & Emma Rios (who've obviously done a lot of non-superhero stuff as well; even aside from 'typical' American small-press stuff, Rios has a background in the Spanish comics scene, and DeConnick used to script English adaptations for manga at Tokyopop back in the day) on that blessed staple of every Eurocomics diet: the Old West gunfighter comic, here adopting a mystic poise through a woman who is Death's daughter and an agent of vengeance. Preview; $3.50.

Velvet #1: Wha-- Image again?! I can't imagine 'reuniting popular superhero teams on a similarly-toned but non-spandex project' isn't as reliable an idea as any in serial comic books at the moment, so here are Ed Brubaker & Steve Epting, previously of a whole lot of super-popular Captain America comics, presenting an original story of espionage and intrigue involving a personal assistant who must demonstrate her aptitude out in the field. Brubaker, of course, is a longtime veteran of crime and subterfuge, and he's mentioned conceptualizing this series as a commentary on depictive tropes in spy fiction. Preview; $3.50.

Hellboy: The Midnight Circus: Every so often, the Hellboy franchise departs from its typical serial structure to offer concentrated blasts of story, always with an artist who's built up a favorable reputation with the character. This time, it's Duncan Fegredo, who used to be the de facto primary artist for the present-tense Hellboy continuity, and is now re-teaming with creator Mike Mignola for a 56-page tale of the title character as a child in the 1940s, running away to the circus (as apple-cheeked American boys did in popular legend), only to encounter demons and shit, I think. It'll probably look really nice. Preview; $14.99.

Dark Horse Presents #29: Also from Dark Horse is a new installment of their house anthology, which I've not kept up with. Nonetheless, this one is noteworthy for offering the conclusion to Blood, i.e. that totally weird, violent Neal Adams serial that's been running intermittently since issue #1. Also included are continuing serials by David Lapham, Ron Randall and others, along with a new Poe story from Richard Corben. Samples; $7.99.

X-Men: X-Corps: So, like I mentioned the other week, I've been trying to watch a whole lot of anime, and one of the series I've picked at recently is called Tiger & Bunny, which is a superhero anime. Like, specifically, an American-style superhero cartoon, fronted by this guy, Keiichi Satou, who became sort of famous among certain American viewers years back for designing a prior show, The Big O, in a style not entirely unlike that of DC superhero animation godhead Bruce Timm. Tiger & Bunny doesn't look anything like that, but anyway - it became a big success in Japan by offering up weekly superhero thrills (and kinda dumb titillation) (and, actually, some unbelievably risible homophobia, like hair-on-end Oh My God shit) with a certain dash of cynicism, portraying its superhero cast as difficult celebrities determined to manage their brands as much as fight crime. And I thought to myself: this is like a Joe Casey comic. I mean, it's like Paradax too, and Zenith, and X-Statix, a little, but man, I am seriously reliving my semi-prolific superhero days of the mid-'00s right now, when every fourth series seemed to have this type of concept.

All of this is a long way of saying that Marvel now appears to be sneaking out a 464-page omnibus softcover collecting the entirely of Casey's ill-fated 2001-02 tenure on Uncanny X-Men, an Ian Churchill-pencilled neon sex appeal revamp that launched at the same time as the Grant Morrison/Frank Quitely New X-Men, which instantly superseded its older sibling as line-leader. And while I'm not going to make the case for this as a forgotten classic or anything (it's scattered, haphazard, confused, and even less visually consistent than the famously inconsistent New X-Men), it has enough moments of bizarre energy and unexpected happenstance -- like Eddie Campbell popping by to draw a portion of one issue -- to command a certain leery respect as a doomed effort to invigorate one of the most conservative properties of them all. Of course, I don't think any of these 17 comics are commanding especially high prices on the back-issue circuit, but some like 'em bound; $39.99.

Garth Ennis' Erf: A while back, famous action/war comics specialist Garth Ennis fronted a Kickstarter campaign to publish a 48-page children's picture book with Flanimals artist Rob Steen and everyone was like LOL IT'S FUNNY, THAT IS A SEEMINGLY UNCHARACTERISTIC CREATIVE IMPULSE FROM THE CONTEXT PROVIDED BY THIS PERSON'S PRIOR BODY OF WORK, TAKE MY MONEY! As it turned out, Erf was actually a compact socio-political manifesto of sorts, emphasizing the qualities of community-minded empathy and altruistic self-sacrifice as necessities for the survival of the human endeavor. Maybe not a potential Caldecott Medal recipient, but oddly resonant for admirers of Ennis' other works (who, let's face it, were obviously going to put up the cash anyway). Now in comic book stories, from Dynamite; $14.99.

All the Wrong Questions Vol. 2 (of 4): "When Did You See Her Last?": And finally, your not-a-comic-in-the-slightest for the week, the newest illustrated Little, Brown YA prose novel by renowned The Complete Peanuts Vol. 20 introductory essay writer Lemony Snicket, offering 288 pages of further details on the world of his A Series of Unfortunate Events mega-series. It is, as before, illustrated throughout by Seth, and that is why it is here. Official site; $16.00.

Suteki was released in 2012; individual images are not credited. It was edited by Daisuke Ichiba, and can be purchased here. 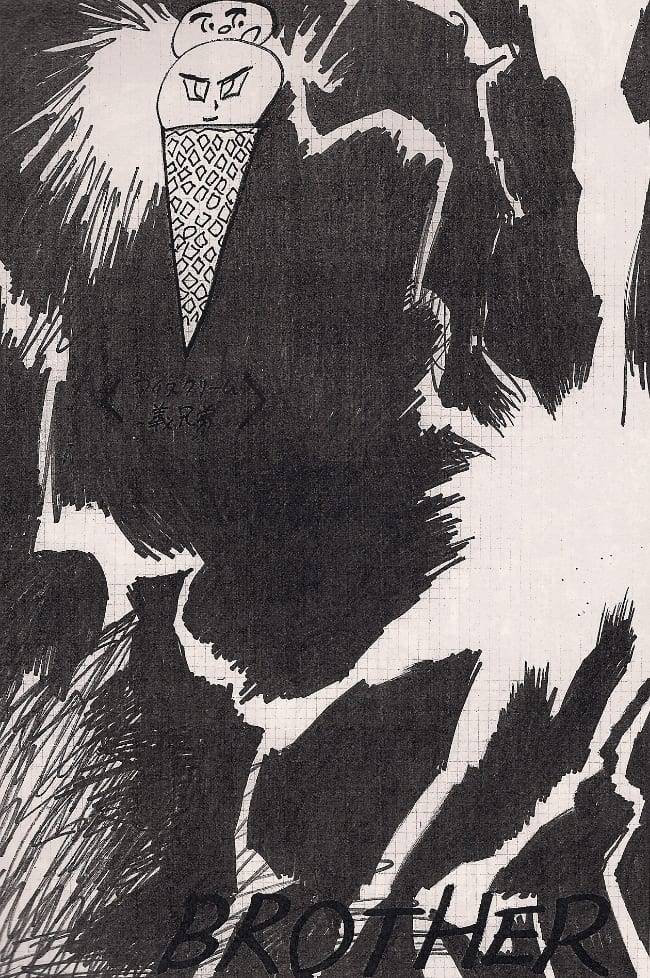 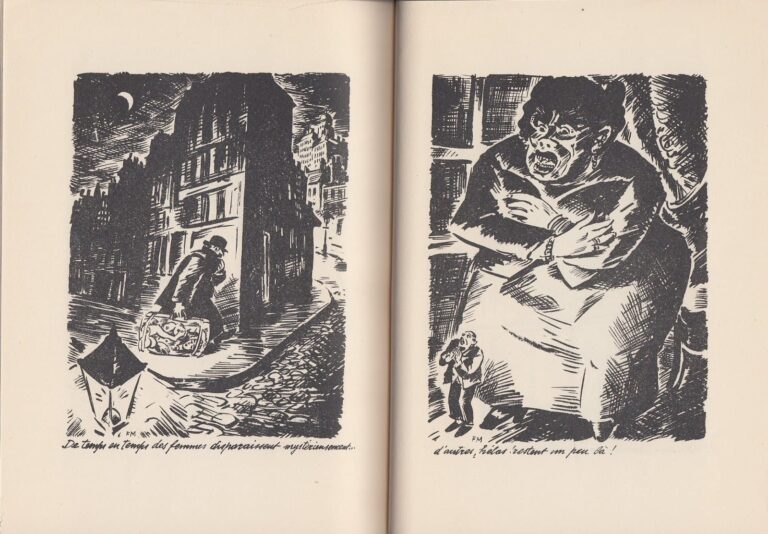 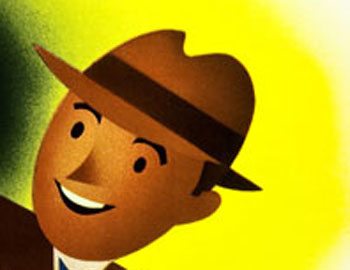