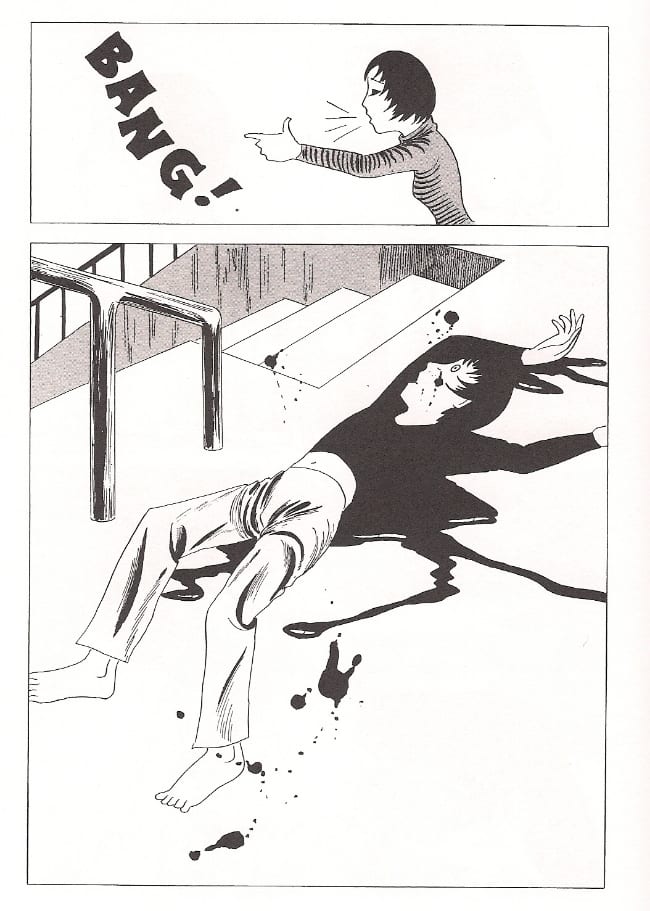 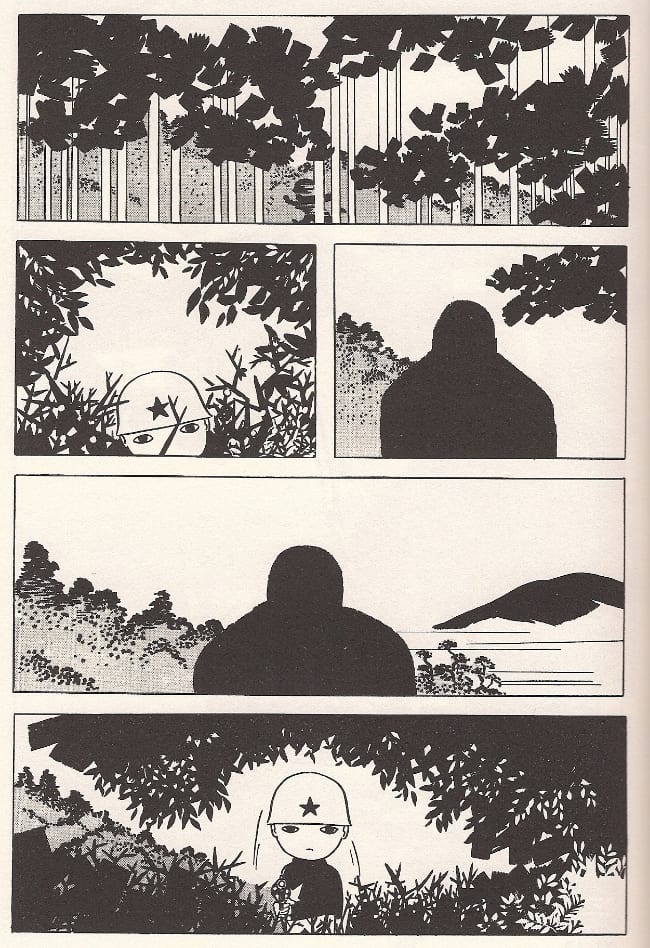 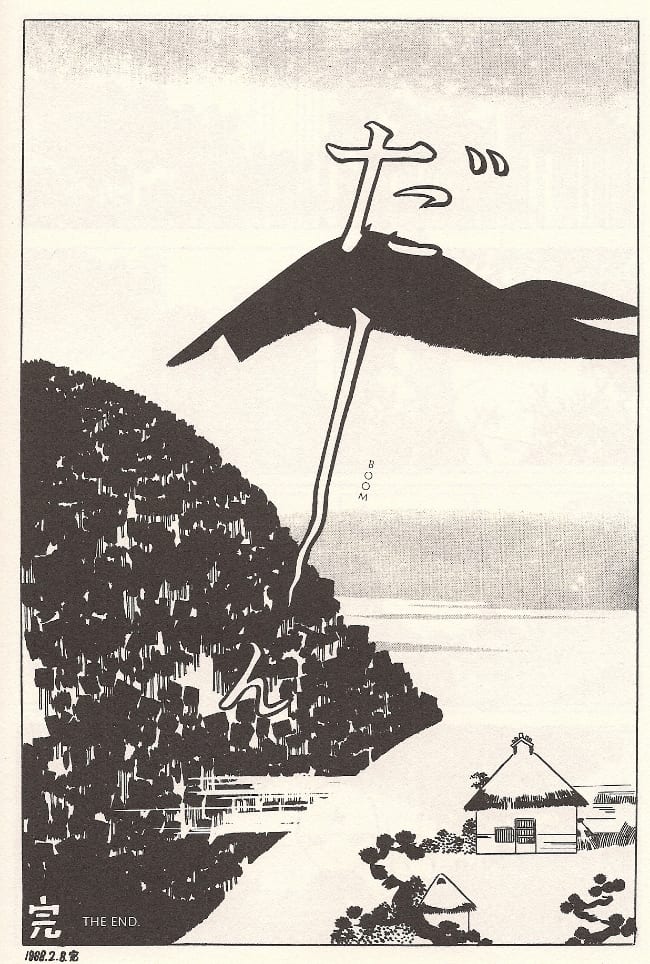 Love affairs collapse into shootout finales in this pair of metaphoric scenes from Seiichi Hayashi, one of the standout alternative mangaka of the '60s and '70s. The uppermost page is from his landmark 1970-71 serial Red Colored Elegy, which Drawn and Quarterly published in English back in '08. A veritable anti-Top Gun of anime, the story never quite gets into which projects the author's semi-fictional avatar is working on, although the real Hayashi did some grunt work on 1963's excellent The Little Prince and the Eight-Headed Dragon, which boasted future Studio Ghibli luminaries Isao Takahata and Yasuo Ōtsuka among its more prominent ranks. At least Hayashi got his shots off in due time; I wonder if this bit inspired a famous moment from the much-later Cowboy Bebop?

It was already a recurring motif for the author, though, who similarly closed out his revered 1968 short Red Dragonfly (collected in PictureBox's forthcoming Hayashi anthology Gold Pollen and Other Stories) with a rather similar image, only with a young boy pausing his soldier game to shoot down the looming ghost that is his mother's lover, and the facilitator of his family's continued survival in the post-war period. North American traditions changed too in half a decade, so that now Hayashi's closing sound effect is left 'subtitled,' retaining its eerie symbolism as a veritable lighting crack issuing from a cloud to blast the countryside. The boy has understood something, now, but if we view these works as a continuity of fictive memoir, we know that he too will not be spared when he is old enough to wear the shadow himself. 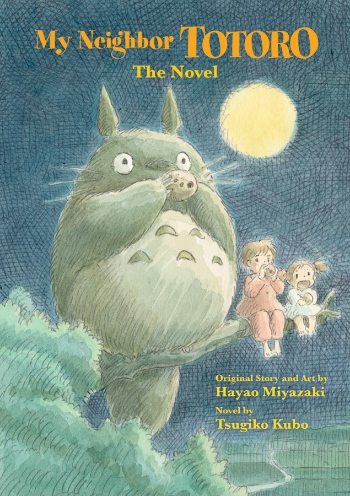 My Neighbor Totoro: A Novel: Yeah, I liked Spirited Away a lot, sure, but for my money the gold standard of the Hayao Miyazaki oeuvre remains 1988's My Neighbor Totoro, a semi-autobiographical traipse through woody daydreams devoid of all antagonism save for a child's fear that a sick parent will die: a concern too sophisticated to yet articulate, and thus loaned an irregular but invisible power. It's a true all-ages film, which is maybe why Viz is branding this hardcover storybook-style adaptation from around the initial release a "Novel" (or maybe it's because they've already released a "Picture Book," derived from images from the film itself). The author is one Tsugiko Kubo, but the real draw for these 192 pages will be watercolor illustrations by Miyazaki himself, whose accomplished comicking on Nausicaä of the Valley of the Wind gives me juuuust the tie-in I'll need to spotlight this flagrant not-a-comic in my comic book column. Plus, if Maurice Sendak is any indication, Miyazaki totally has the crotchety children's book illustrator thing down for interviews; $17.99. 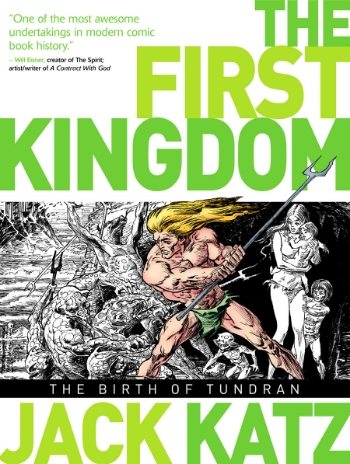 The First Kingdom Vol. 1 (of 6): The Birth of Tundran: This is also a weird [s]potlight [p]ick, not because it isn't a comic, but because virtually everyone in the world tends to chase "yeah, The First Kingdom!" with "...have you tried to read it?" Nonetheless, American pre-Code horror standout Jack Katz's evolutionary SF/fantasy opus (serialized 1974-86) stands as one of the obsessive man-carved landmarks of the immediate post-underground/early Direct Market era, and now Titan Comics is releasing a line of deluxe 11" x 7 1/2" hardcovers re-scanning the entire endeavor from the original art and replacing the original issues' gnarly Mad magazine-like lettering with an ostensibly friendlier digital font. I dunno if anything will make this series friendly, though; you feel a certain unease flipping though it, like you're out sightseeing and suddenly you've found yourself standing next to something extremely large. Expect introductory comments by Katz and supplementary essays across 208 pages. Restoration preview; $24.99.

Fairy Tale Comics: Back in 2011 (were we ever that young?), editor Chris Duffy put together a totally amazing lineup of talents for Nursery Rhyme Comics, a First Second anthology of short adaptations brimming with everyone from Jaime Hernandez to Mike Mignola to Roz Chast. This is Duffy's follow-up from the same publisher, a 128-page color hardcover favoring longer contributions from Los Bros, David Mazzucchelli, Raina Telgemeier, Emily Carroll, Craig Thompson, Jillian Tamaki, Joseph Lambert, Luke Pearson, Ramona Fradon(!), Graham Annable, Vanessa Davis, Karl Kerschl, Bobby Motherfucking Dirty Duck London (who's worked extensively in children's television... but still!) and others. Basically the YA Nobrow at this point, all but vocally urging you to peruse. Samples; $19.99.

We Won't See Auschwitz: Being Abrams' latest North American release of a SelfMadeHero edition of a French-language comic, a 208-page autobiographical album by Jérémie Dres, in which the artist and his brother blow off the expected Holocaust inquiries to explore "what it means to be Jewish and Polish in today’s world." Preview; $22.95.

The Witching Hour #1: "Practice witchcraft with VERTIGO and destroy all men!" Definitely my favorite DC solicitation in years, relating to this 80-page comic book-format anthology - hopefully a themed anthology, though it might just be named for an old comic and released in the month of Halloween. Either way, I am assured that Brett Lewis of The Winter Men (excellent stuff, track it down) will have a story in here with artist Cliff Chiang, which alone makes this worth a perusal. Plus: Emily Carroll, Kelly Sue Deconnick, Mark Buckingham, more; $7.99.

CBLDF Liberty Annual 2013: Every year the Comic Book Legal Defense Fund puts together one of these anthologies of original free speech-themed comics as a fundraiser, and it's pretty fun to peek in and see who's involved. Among the '13 headlines is Mr. Richard Corben, who will purportedly be either returning to the characters of his famed Neverwhere series or at least alluding to them in a new short. Expect additional contributions by Art Baltazar & Franco Aureliani, Tim Seeley, Gabriel Hardman, Fábio Moon, Gabriel Bá and others in this 48-page Image release; $4.99.

Grindhouse: Doors Open at Midnight #1 (of 8): You know what basically every contemporary 'grindhouse'-style thing (by which I mean 'entertainments positioned to evoke the particular tone of exploitation cinema from the mid-1960s through the early 1980s) misses? The fake morality. Like, exploitation movies generally weren't zones of resistance to the prevailing culture. Some of them were, but most of them sought to re-package familiar narratives (and codify existing prejudices) in a way which would flatter the expectations of the viewer, typically a middle class monoculture sort, the urban environs of many famous theaters (which did brisk business as tourist attractions) notwithstanding. Like not a few early pulp magazines -- which at least ostensibly framed many of their criminal narratives as tales of sin, duly punished -- the 'grindhouse' films profited from an acute hypocrisy, offering the patron a vacation from morality under the assurance that what they were seeing was deviant, and thus remote from their workaday status quo lives. It wasn't punk rock, it was movies you attended in a buttoned-down shirt (unless you were at a drive-in, which had an overlapping but culturally distinct purview). Anyway, I don't know why I'm packing this digression into the capsule for a perfectly okay-looking Dark Horse project from writer Alex de Campi, who will be teaming with various artists for two-issue shots of over-the-top horror-ish stuff (Chris Peterson goes first). Preview; $3.99.

Thrud the Barbarian: Of course, there's always outright parody, as artist Carl Critchlow (just in stores last week as part of Judge Dredd: Trifecta) has been offering since 1983 in tabletop gaming publications, comic books and now this 144-page Titan Comics hardcover compilation of high fantasy spoofing, delineated in super-rich digital color. I remember buying issue #1 of this on a whim years ago, and quite liking it. Samples; $19.99.

Sickness Unto Death Vol. 1 (of 2): This is the newest manga offering from Vertical, a 2010 short series from writer Hikari Asada and artist Takahiro Seguchi, neither of whom have previously been published in English, save for one volume of Seguchi's solo action/suspense/otaku-maid-fetish series Enmusu years ago. This one's about a psychology student who boards with a troubled young woman; "Recommended for the Flowers of Evil readers out there," sez the publisher. The serializing forum was seinen magazine Young Animal, which has historically matched series like Berserk and Detroit Metal City with good ol' fashioned smut; $11.95.

Mobile Suit Gundam: The Origin Vol. 3: Ramba Ral: Also from Vertical comes another 480 pages of top-shelf robot space war from Yoshikazu Yasuhiko. I've yet to encounter a better action comic in 2013, and this is coming from a guy who's watched maybe 0.4% of the eleven billion hours of Gundam anime currently in existence. With bonus fan art and reflections by Genshiken creator Shimoku Kio; $29.95.

Slam Dunk Vol. 30 (of 31): Hard to believe Viz is nearly finished with this era-defining '90s sports manga megahit by Takehiko Inoue, but I'm expecting the author's skills at this point have been honed to such an edge that virtually every page commands some sort of eruptive action comics mastery, fit for a headlining talent in a magazine issuing more than five million copies per week, as was the standard back then. Love that pop manga pricing too; $9.99.

Pippi Longstocking Vol. 2: Pippi Fixes Everything: Oh really, Pippi? Can you fix my emotional unavailability? Didn't think so! Nonetheless, I will draw attention to this second Drawn and Quarterly collection of your antics from Astrid Lindgren & Ingrid Vang Nyman, a 56-page hardcover album at 7.5" x 9.5" dimensions. Samples; $14.95.

Judge Dredd: The Complete Carlos Ezquerra Vol. 2: Maximal! This is IDW's line of 9.5" x 12" hardcovers collecting Dredd material by artist, now returning to the strip's co-creator for another 248 pages, including (if the solicitation is correct) the entirety of The Apocalypse War, which for some reason did not appear in its expected chronological space in vol. 1 (maybe because the publisher is trying to colorize it in comic book format as Judge Dredd Classics). Plus: other bits 'n pieces from the '70s, '80s and '90s, apparently; $49.99.

Strontium Dog Digest: Portrait Of A Mutant: Minimal! Rebellion, meanwhile, issues a pocket-ready 144-page collection of a 1981 mutant bounty hunter storyline by Ezquerra and writer Alan Grant, as a means of introducing new readers to the similarly long-lived Strontium Dog strip from the Judge Dredd creators. Probably some extra shorts in here too, going by the page count; $12.00.

Fantomex MAX #1 (of 4): But because old comics needn't remain the sole home of an earlier generation's talents, I will now draw your attention to this latest gasp of oxygen from Marvel's 'mature readers' line, in which writer Andrew Hope -- a Scottish screenwriter and novelist who worked briefly for Trident Comics in the early 1990s, at one point collaborating with a 20-year old Mark Millar -- revives a much-loved Grant Morrison Diabolik riff for a continuity-free bit of sci-fi espionage in which you are permitted to say "fuck." Art by Shawn Crystal; $3.99.

Chilling Archives of Horror Vol. 4: Jack Cole's Deadly Horror: And on that note, we'll wrap things up with the first of what I'm sure will become a rush of Halloween-themed releases, a new 148-page, 8.5" x 11" IDW hardcover compiling various horror comics from the prodigiously talented creator of crime, humor and superhero tales; $24.99. 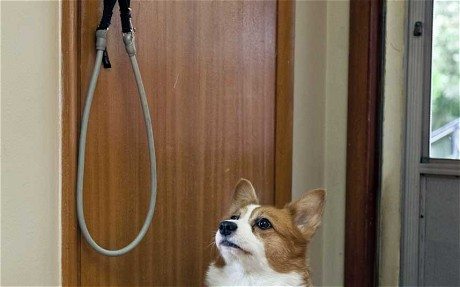