Time rushes on, but I'm still thinking about a book I found at SPX from the Finnish publisher Asema. Its title is Mehiläispesä (hereafter referred to as "The Beehive"), and its author is Anna Sailamaa, who recently put out a small comic, Everyone is Hungry, with the Latvian publisher kuš! The Beehive is a somewhat earlier work, released in 2015. All pages containing text are subtitled in English, removing the need for re-lettering - this technique I've come to associate with Finnish comics, though it's not exclusive to them. 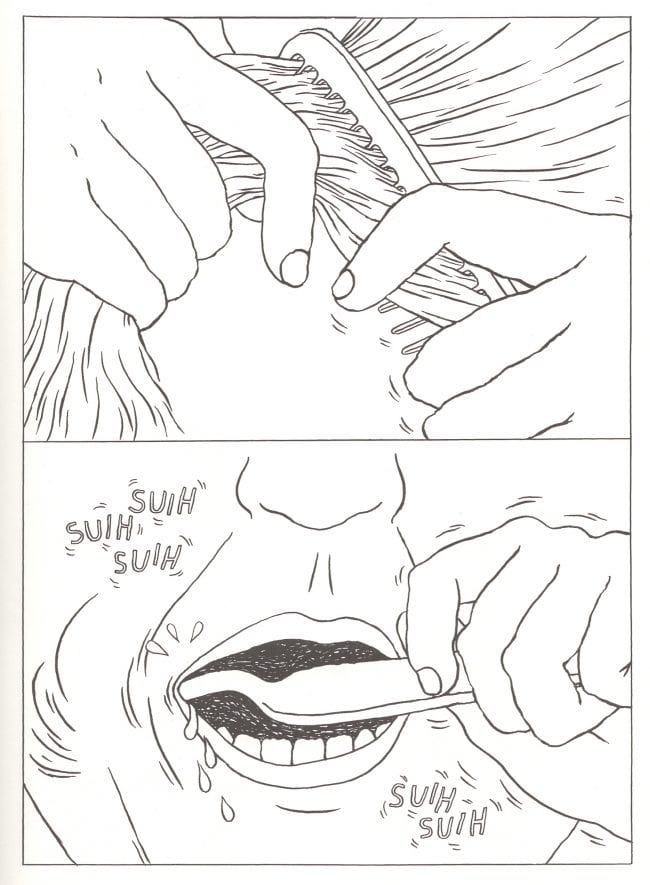 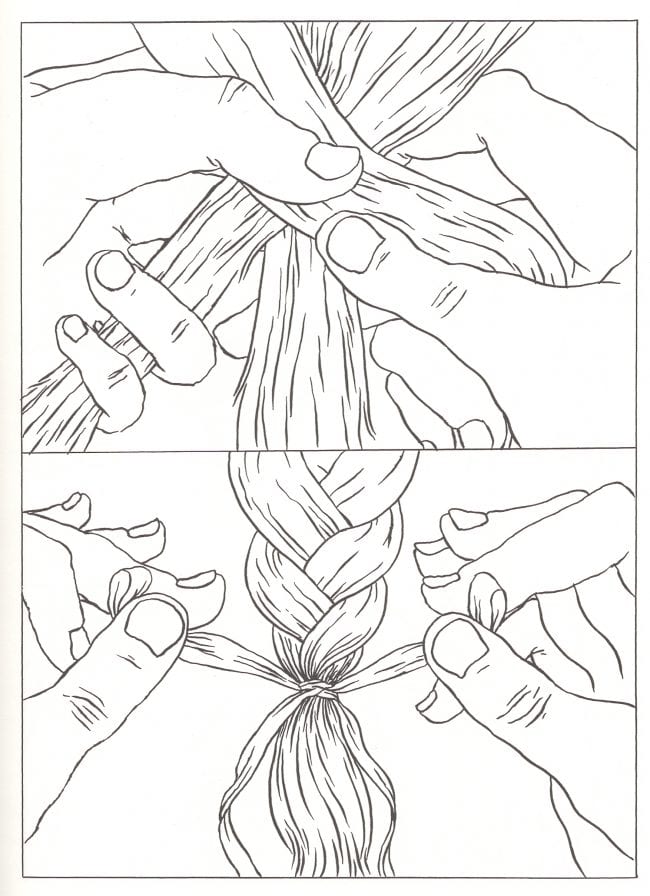 I was not familiar with Sailamaa prior to this, but something about the book compelled me to pick it up entirely on a whim. Perhaps the winding, sinister title lettering reminded me a bit of Julia Gfrörer -- you don't see very many comics reminiscent of hers -- though Sailamaa works in a much more removed, rather formalistic approach. The book is split into three parts ("Cleanliness", "The Wound", "The Clean-up"), each covering a portion of one day in the lives of young girls who live in a highly metaphorical group home environment, seemingly devoid of adult supervision. Text introductions to each section describe the characteristics of the house in great detail, both its physicality and the eternity of the space which it occupies - nothing truly changes in this place. Observational drawings of stones, water and plants accompany these preludes, as if from a science textbook, and Sailamaa maintains this aloof and observational stance as the sections play out. "Cleanliness" begins with the faces of every girl sleeping, in full splashes and four-panel grids. As they away the perspective shifts between extreme closeups of parts of their bodies, especially their hands, and side-profile images of their faces, to which most of the dialogue is attached.

Stones magically appear on a table. It is the task of the girls to wash the stones. 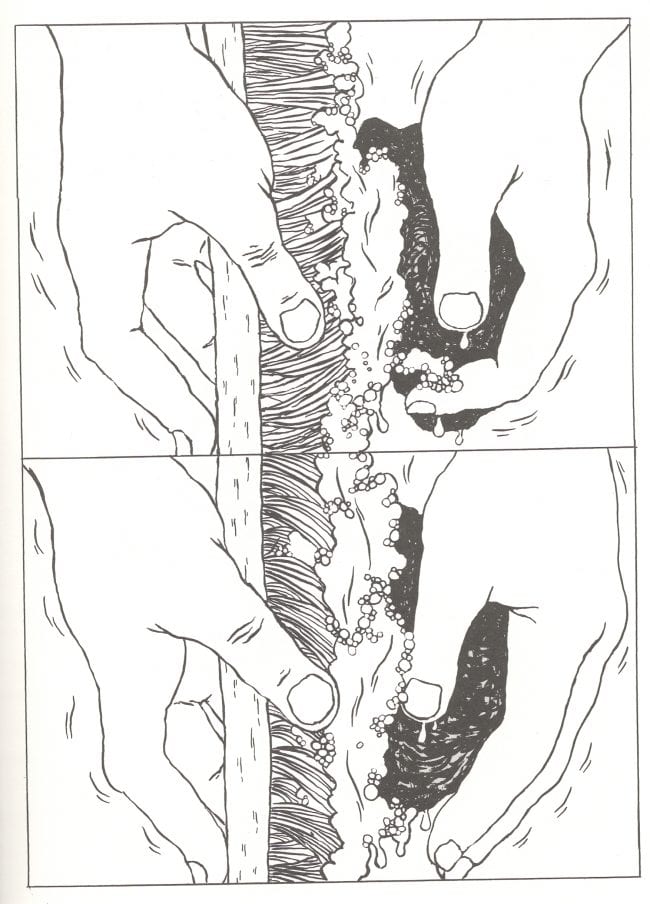 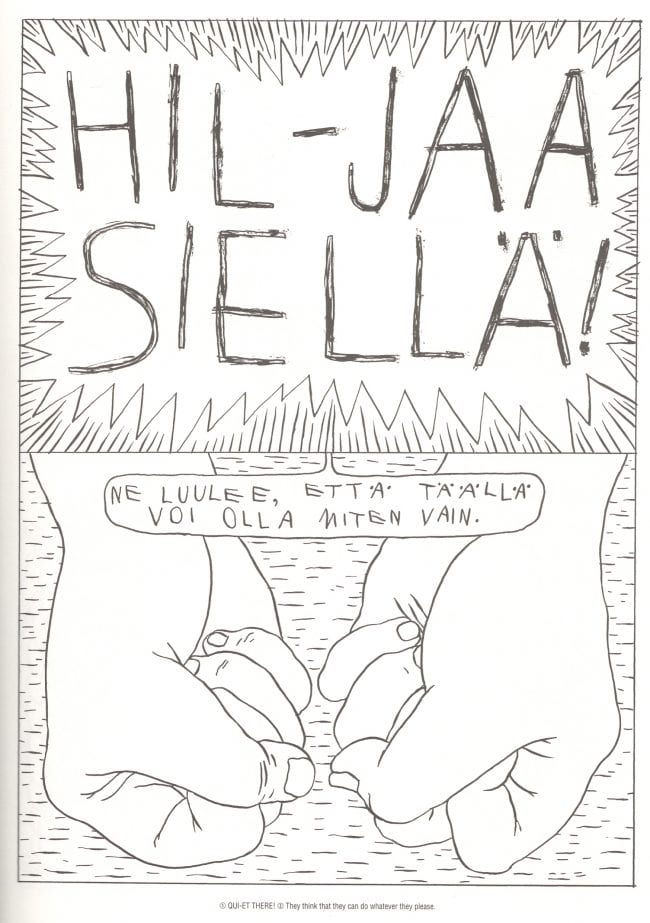 The washing occupies much of "The Wound", Sailamaa again honing in on profiles, eyes and hands, subdividing pages to emphasize minute gestures such as fingers gripping and eyes blinking. She is extremely good at drawing hands at work; from these images alone, we might assume the girls are themselves identical drones in a biological machine, but they are not uniform; some insist on chatting and playing handclap games throughout their work, with one girl in particular relating the details of a dream about Death - in fact, her narration of this dream continues irregularly throughout the whole book. Her housemates/coworkers/sisters(?) grow annoyed. There are a lot of rocks on hand. 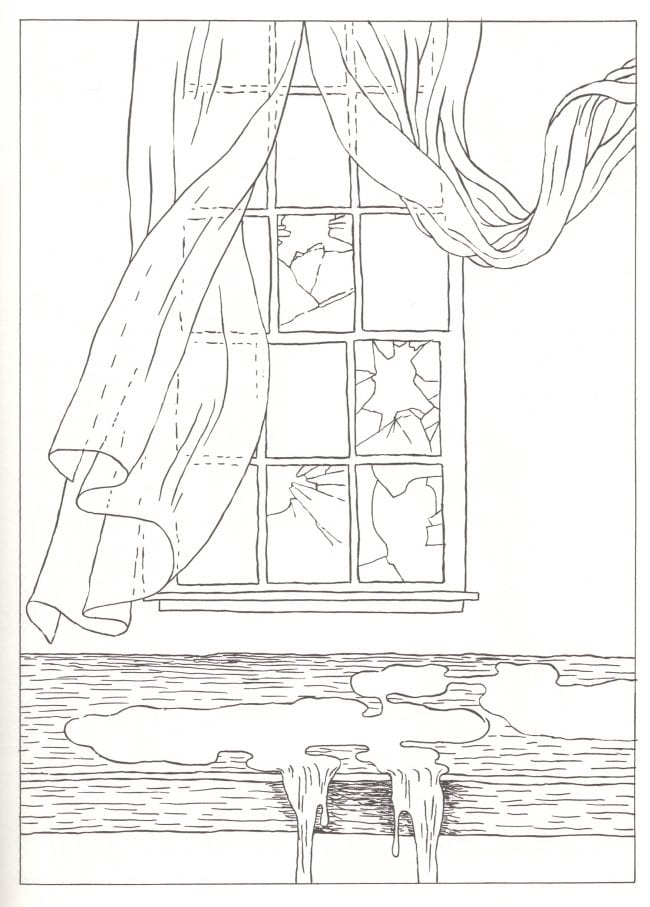 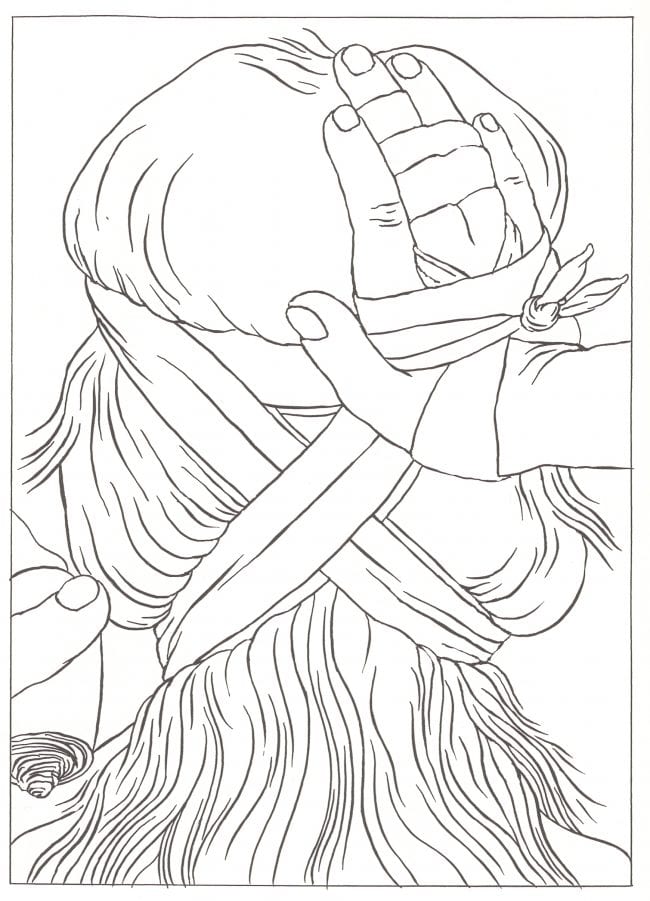 Throughout the show I would pass the book along to different people, its steady rhythms bouncing them along rapidly -- it won't take more than 20 or so minutes to rush through a first read -- until they hit the blunt and bloody violence Sailamaa depicts, and we realize that the scientific eye of her art does not merely glare at hands and faces because they relate work and communication, but because they are fine, delicate instruments, and they may break very easily. "The Clean-up" takes place after the cleaning of the rocks, where the girls must repair themselves before bed. The suggestion, art paired with prelude text, is that this happens every day. That human societies, we might imagine, despite their inclinations toward efficiency, are predisposed to anger and attack against potential deviations; this predisposition, however, is built into the system, its occasional breakdowns actually part of its purpose. A bell rings, like a classroom dismissal, and the girls rise from the floor, thanking an invisible benefactor for work, sun and light. The dreamer, laying in bed, is undeterred despite her wounds. She too is performing her function; the girls fear the night, but she insists she's seen Death in daylight. Death smiles.

They all sleep, wrapped and ruined faces. 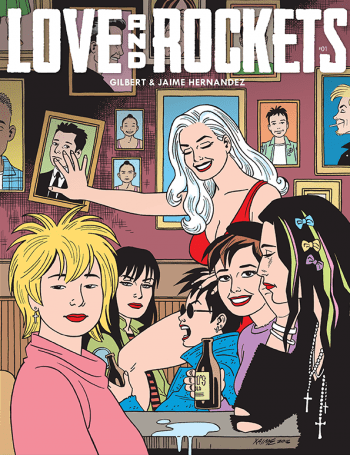 Love and Rockets Vol. 4 #1: HERE IT IS, the new manifestation of what we can probably all settle on as the 'signature' Fantagraphics comic book series, once again in the form of an oversized stapled comic book. Gilbert and Jaime Hernandez occupy equal halves: Beto with a restless, licentious 16-page survey of Fritz's family, and Xaime bookending with 8 pages from the Hoppers crew and an 8-page superhero strip that you Japanese aficionados might term ero guro nansensu. There is also a letters page, house ads, and yes kids - variant covers, three of 'em, all by the Bros., though I think only one is the type of non-exclusive to actually show up at your random comic book store. Having read the issue, this is IMHO not really so much an introduction-to-new-readers type deal (as demonstrated most vividly with Jaime's The Love Bunglers, there is some reliance on one's prior connection to the characters necessary to appreciate their current situations) as the artists enjoying the moment-focused compression of small-scale storytelling; $4.99. 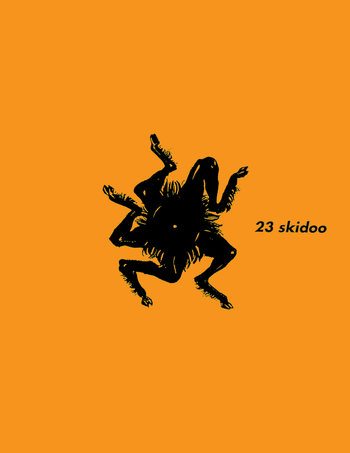 23 skidoo: Another comic book, but of a much older sort - it's a 1994 minicomic by Al Columbia, released just prior to the start of The Biologic Show with Fantagraphics. Now it sees an irregular anniversary reissue from Wow Cool, though I believe the comic shop distro is via Alternative Comics. Across 28 pages you get "four intense stories of romance, gore, toads, vacuum cleaner salesmen and giant eyeballs," in the wriggly, pillow-skinned style that marked the start of Columbia's evolution toward the old-timey animation design look with which he is perhaps best associated; $3.99.

Cowboys and Insects: Not an especially crowded week to my eye - I mean, there's a stack of Marvel and DC releases the size of an average adult's torso, but this column is an unyielding march through one man's peccadilloes, and it is by them I instead highlight this new release from writer David Hine and artist Shaky Kane, the team behind two very fine volumes of The Bulletproof Coffin with Image. Cowboys and Insects, however, is a Floating World release (again, distro by Alternative), 28 color pages in an 8" x 5.25" landscape format. An allegory of love and partiality in an alternate 1950s, skittering with the type of big bugs known only to the nuclear angst cinema of our own world; $4.99.

Shirley Jackson's "The Lottery": The Authorized Graphic Adaptation: Speaking of societies prone to violence, this 160-page Hill & Wang release adapts the famous 1948 short story from the pages of The New Yorker, in which a fine village carries out a horrible ritual by dint of tradition. The artist, Miles Hyman, is apparently author Shirley Jackson's grandson, though his comics work has been done mainly on the French scene - he drew the 2013 David Fincher-associated The Black Dahlia album which Archaia/BOOM! released in English earlier this year, while this book is a near-simultaneous release with a Casterman edition in Europe; $16.00 ($30.00 in hardcover).

Such a Lovely Little War: Saigon, 1961-63: As for French comics you're less likely to find at Barnes & Noble, Arsenal Pulp Press (they of the English edition for Julie Maroh's Blue Is the Warmest Color) has a 272-page autobiographical comic by Marcelino Truong, set amidst the escalation of the Vietnam War. Released in French in 2012, with a '15 sequel, "Give Peace a Chance", covering the period of 1963-75; $26.95.

The Metabaron Book 1: The Techno-Admiral & The Anti-Baron: Definitely your Euro-genre-comic pick of the week, though what's happening here will be familiar to most readers of American franchise entertainment. The Metabaron is a character from The Incal, a 1980s SF series from Alejandro Jodorowsky and Moebius; Jodorowsky later wrote a large number of ancillary projects related to the world of that comic, prominent among them The Metabarons (1992-2003) with Juan Giménez. There have also been prequels and spinoffs to that with different artists, and now we arrive at an official continuation with even Jodorowsky himself at somewhat a remove, sharing story duties with Jerry Frissen. The artist for these two debutante French albums -- released as a single 113-page hardcover in English by Humanoids, 9.4" x 12.6" -- is Valentin Sécher, operating in a misty arch-realist painted look. Note that a third album is either imminent or just-released in French, with Niko Henrichon as artist; $29.95.

Inuyashiki Vol. 5: A very trashy and sensational superhero comic from Hiroya Oku, the creator of Gantz, addressing the adult male audience of Kodansha's Evening magazine with as intense a form of wish-fulfillment as a wizard granting an American boy magical powers. Instead, an aging Japanese man is accidentally obliterated by aliens and reconstructed as a simulacrum using technology at hand, i.e. hugely advanced sensory equipment and amazing weaponry. He sets out on a regimen of literally laying hands on the sick to heal them, but often is called upon to remove the moral rot of contemporary society through righteous violence. Also, there's another robot guy out there - a model-hot high school boy who embodies the situational ethics of a generation on the WRONG path. I can't really defend this comic; it's absolutely nonstop emotional button-press pandering with a lurid gloss of sexualized violence, but I remain fascinated by Oku's increasingly weighted CG art, which has come to resemble scraps of drawn characters ripped off a notepad and pasted down atop photographic backgrounds, its total inhumanity celebrating the artificiality of both its heavy metal hero and the shopworn narrative devices through which he operates. Up to volume 7 in Japan, if you're curious; $12.99.

Usagi Yojimbo #158: The show I was at *this* past weekend was Cartoon Crossroads Columbus, where Stan Sakai was a special guest; a rather large crowd for his conversational panel with Jeff Smith and Sergio Aragonés, considering they were scheduled against a Raina Telgemeier signing at a show that drew a relatively heavy parents-and-kids crowd. Those are all guys with heavy experience in comic book comics across the upheavals of publishing and distribution, and so on this staple-heavy week I will direct your attention to a Genuine Done-In-One Story, as Dark Horse still does with Sakai's rabbit swordsman; $3.99. 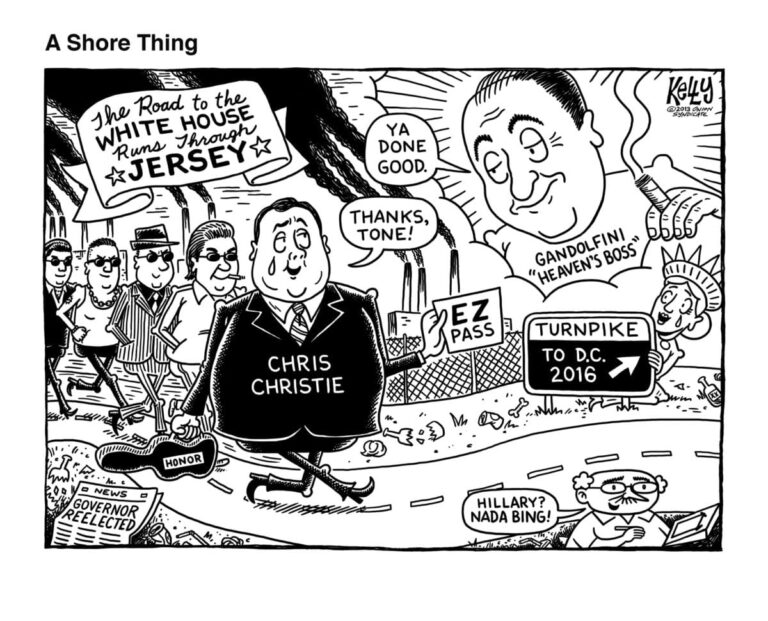 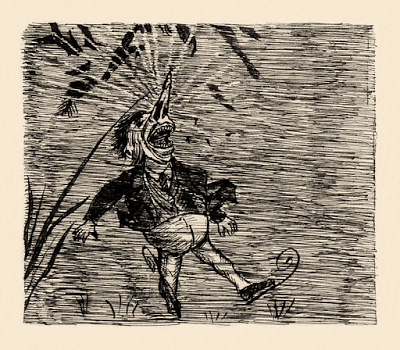