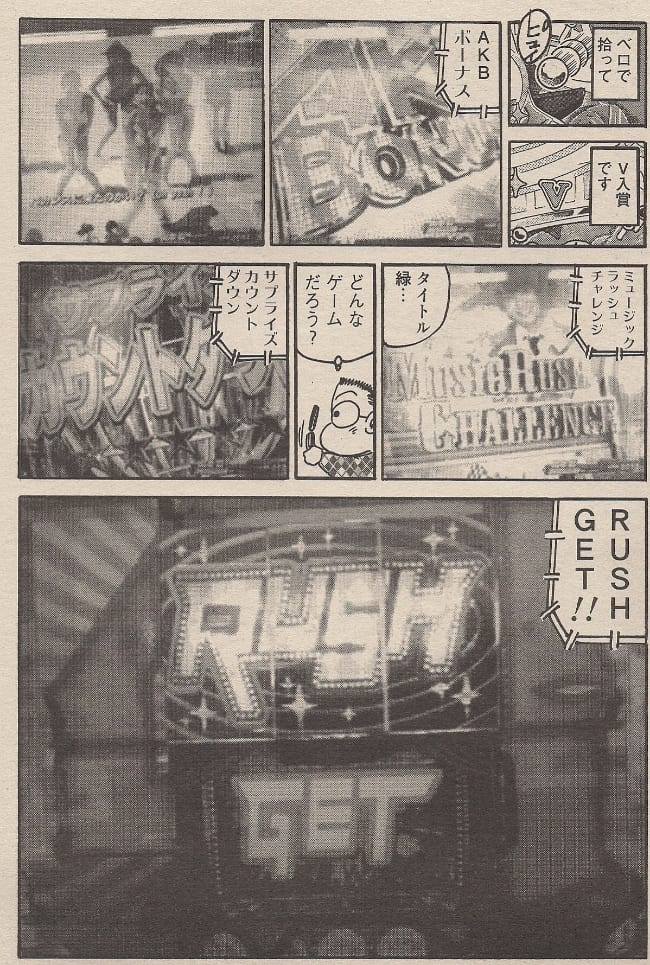 Above we see a small exercise in photocomics from the pages of Manga Pachinko 777, one of several comics magazines published by gag and hobby manga specialist Takeshobo. What? Of course there's pachinko manga! There's golf manga and mahjong manga, but unlike the adventuresome and educational features/serials from out of those specialist forums, Manga Pachinko 777 (and perhaps pachi manga in general) adopts more of a consumer information stance, presenting what amounts primarily to trip reports and machine guides by various expert contributors, most of which include copious photographs by which to introduce YOU to your new favorite gambling spots. This particular segment is quite egregious, as the artist seems to be taking photos of an AKB48-themed machine while he's playing it, creating a wonderfully inexpert and slightly ominous visual style - all that gritty b&w! Is somebody gonna walk up to this guy and beat the shit out of him?

Apparently Takeshobo has introduced some sort of Augmented Reality feature with this magazine - I guess so you can actually watch videos taken from the various machines. It absolutely would not work for me, despite downloading the applicable app, which came as a slight relief, since I'd begun to expect the videos in question would somehow capture the author's murder, leading to the dorkiest version of Blow-Up imaginable. I don't have time for that - I have a lot of releases to summarize! I PERFORM A SERVICE; I AM A VALUABLE MAN. 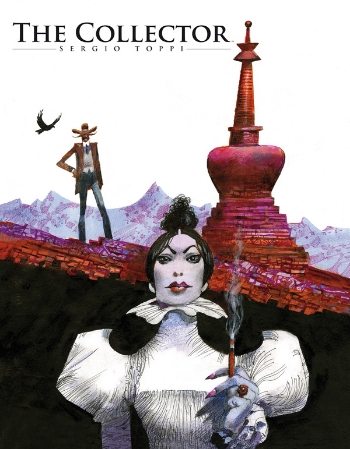 The Collector: It's been a *long* time coming (first announced, I believe, in 2012), but Diamond assures that this is not a false alarm - BOOM!/Archaia's 252-page translated compendium of the five-album Sergio Toppi series is actually due to arrive in comic book stores this week. This follows Archaia's late '12 edition of Toppi's Sharaz-De: Tales from the Arabian Nights, an episodic collection which saw simple moral tales manifest as forums for graphic extravagance. These are longer stories, in which a globetrotting connoisseur does whatever he can in the service of acquisition; available samples tell of a straightforward perspective on dedicated adventurers traversing exotic terrains, though I'm interested to see these works in full. An 8.5" x 11" hardcover. Preview; $34.99. 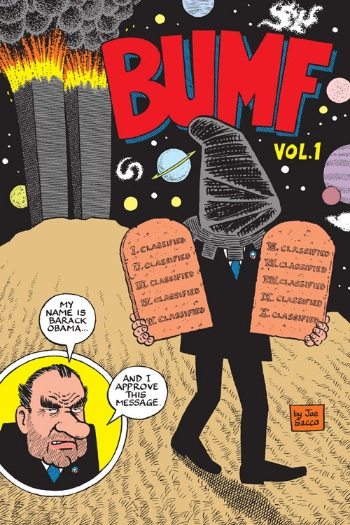 Bumf Vol. 1: I Buggered the Kaiser: I'm pretty sure I've seen this one in stores already -- and I'm certain it's been available at convention appearances -- but only now do I see official word of the new Joe Sacco arriving in Diamond-serviced comic book stores. It's sort of the Love and Rockets: New Stories of the Sacco oeuvre, a continuing series of bookshelf-format comics that will collect new, shorter works, including those which are "puerile, disgusting, and beyond redemption," per the publisher. Puerility carries its own political character, of course - it can serve to reinforce or undermine social norms, and it will be something to see where a cartoonist so inexorably associated with political reportage falls. It's a 100-page softcover, 6.625" x 10.5". Preview; $14.99.

A City of Whiskey & Fire: Not exactly 'the new Noah Van Sciver' - for one, it's a collaboration, with writer Daniel Landes, and moreover it seems to be an Alternative Comics *reprint* of a 20-page work self-published by the creators earlier this year. Nonetheless, you probably haven't seen it: a historical work concerning a great fire which devoured the many wooden structures of Denver, CO in 1863. The size is 7" x 7"; $4.99.

In Real Life: A new First Second YA presentation - a timely 192-page chronicle of a young girl transfixed with a MMORPG, who discovers that real-life economics and privileges still apply to the world of online gaming. Written by notorious luddite Cory Doctorow, with art by Jen Wang. Preview; $17.99.

Station 16: Ahh, Hermann Huppen - another one of those BD mainstays who've flickered in and out of visibility in North American comic book stores since almost the beginning of the Direct Market; I think Fantagraphics debuted him in English back in '82, when his Jeremiah series was retitled at "The Survivors!" His is a very lush, very traditional adventure strip look, of consistent enough appeal to readers (and publishers) of such inclinations that we are seeing this brand-new 56-page album the same year as its French release. Written by the artist's son and frequent collaborator, Yves H., the story involves weird happenings and nuclear terror in icy Russia. An 8" x 11" hardcover, published by Dark Horse in collaboration with Strip Art Features. Preview; $19.99.

The Black Dragon (&) The Complete Johnny Nemo: Speaking of early-ish comic book store fare, here are two from the archives, spit-shined by Titan Comics. The Black Dragon was a 1985 Epic Comics occult swordplay miniseries from the team of Chris Claremont & John Bolton, which had created an earlier dark fantasy series, Marada the She-Wolf (also collected by Titan) in the pages of Epic Illustrated. I think an earlier, 1990s collection was in b&w, while this 192-page hardcover restores the color. Johnny Nemo, meanwhile, is a Peter Milligan/Brett Ewins concept which debuted in the short-lived, much-admired Eclipse anthology series Strange Days, later becoming an Eclipse series and a feature in the popular UK magazine Deadline - dynamic, anarchic over-the-top future noir starring a violent detective, now available in its entirety; $19.99 (Dragon), $22.99 (Nemo).

Ajin Vol 1: Demi-Human: Your manga pick for mid-October, a new Vertical translation of seinen stuff out of Kodansha's good! Afternoon, which is a bimonthly sub-series to the monthly, phonebook-thick Afternoon magazine - together, they account for roughly 11,000 pages of comics (on the low end) per year, and Kodansha has several additional seinen publications. But you don't have time to read all that! Let Vertical make this selection on your behalf: a Tsuina Miura/Gamon Sakurai serial concerning an immortal boy desired by human science and his own kind. Note that Crunchyroll is releasing a digital edition on a subscription basis; $12.95.

DMC Vol. 1: But like all of humankind's accomplishments, seinen magazines cannot endure forever - last month saw the release of the final issue of Shogakukan's IKKI, a mainline magazine with a determined 'alternative' flavor, which occasionally stretched to include non-Japanese contributors like Felipe Smith, who created the series Peepo Choo. He's currently the writer of Marvel's All-New Ghost Rider, but if you want to see more of his art you'll need to check this out: a superhero comic premised around the exploits of hip-hop icon Darryl "D.M.C." McDaniels (also the publisher via Darryl Makes Comics), and featuring contributions by a whole lot of people, including writer Damion Scott and "creative consultant" Ron Wimberly, among a host of artists (Smith included) for individual chapters. Official site; $19.99.

Q2: The Return of Quantum and Woody #1 (of 5): Tom Spurgeon says this all the time over in his weekly shopping list column, but I feel the same way - the new Valiant comics are just a total, total blind spot for me, despite work by perfectly talented people like Joshua Dysart, Jeff Lemire and Matt Kindt (all writers). You know what else is a blind spot? Late '90s superheroes, from when I was reading almost nothing in the way of comic books. Still, one of the enduring favorites I always hear about from that difficult post-crash age is Quantum and Woody, a comedic 'odd couple' team book created by Christopher Priest & M.D. Bright for the "Valiant Heroes" line at Acclaim Comics (Acclaim Entertainment being a video game publisher which had acquired Valiant in '94). The new Valiant revamped the title last year without the original creators, to some consternation, but now Priest & Bright have returned for a limited engagement, following up with their characters as they face the agonies of age. Preview; $3.99. 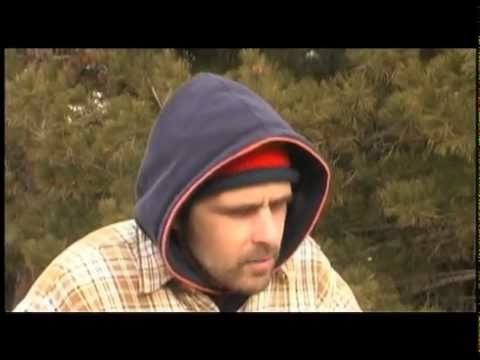 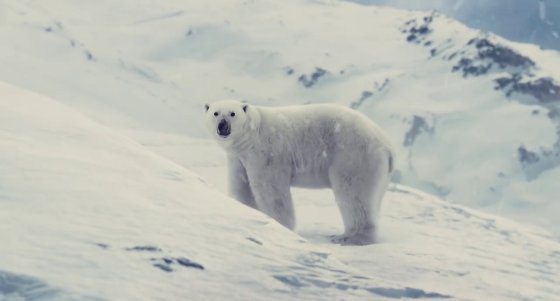