There's no time! Too many comics this week! It's Columbus Day! Fuck! I'm just gonna grab the first panel I find. I'm gonna close my eyes and point my finger and the results will foretell the trajectory of this week's column. 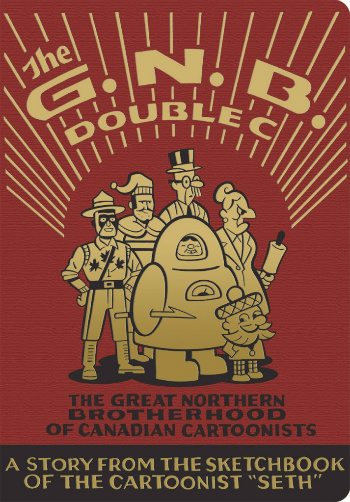 The Great Northern Brotherhood of Canadian Cartoonists: D&Q DOUBLE-SHOT, starting out with a spanking new 136-page follow-up to the artist Seth's completely wonderful 2005 release Wimbledon Green, a stripped-down, vignette-powered sketchbook graphic novel imagining the world of hardcore bin-diving comic book back issue collectors as a Barksian fancy of gallant high adventure and lingering mystery and, inevitably, some melancholy. This one ventures into the comics themselves, presumably dealing with both the artists and their works, and maybe allowing the author a forum to play with diverse narrative content - for instance, sample images have contained apocalyptic sci-fi, Seth style, which fills me with deep and profound pleasure from the very core of my soul. I expect this to be good. Aforementioned preview; $24.95. 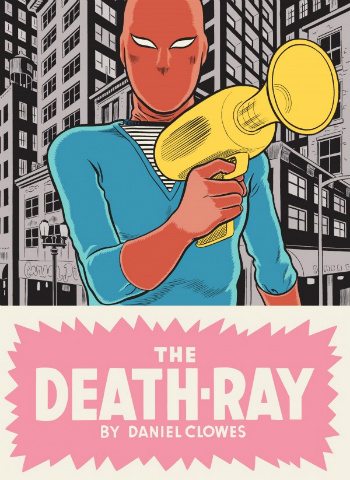 The Death-Ray: In contrast, I know this will be good, since I greatly enjoyed its 2004 comic book incarnation as Eightball #23, the final issue of that one man show before Dan Clowes switched to bookshelf-ready originals and alternate means of serialization. In hindsight, it's oddly fitting that the grand finale would be an extended riff on superhero comics, a genre so heavy with prior critiques and deconstructions that Clowes' entry wound up being discussed as more of a straightforward genre entry than perhaps intended, and pretty roundly praised at that; I even recall Grant Morrison slipping a likely homage into his subsequent DC superhero mega-project Seven Soldiers. We're all pretty far away from that point after half a decade and change - Clowes, Morrison, and frankly the online discussion of comic books, which has both grown larger and congealed into multiple specialized gobs of focus increasingly aloof from one another, to the point where I wonder if such a work could be processed in a similar way today. Guess we'll find out. Preview; $19.95.

Pope Hats #2: Being the 40-page sophomore issue of a NEW one man show, that of artist Ethan Rilly, whose 2008 Xeric-funded debut was distributed by AdHouse. The Xeric grant will be defunct as of May 2012, and AdHouse is now Rilly's publisher. There's some very nice cartooning in here, and the samples I've read are very funny, although I admittedly require no convincing that the hapless misadventures of a law clerk transitioning into a position of greater responsibility in the office are purestrain comedy gold. Preview; $6.95.

Troop 142: A 268-page Secret Acres culmination of Mike Dawson stories, minicomics and webcomics about scouting and the social issues arising therefrom. Rob Clough interviewed him at this site; $20.00.

Sita's Ramayana: This piqued my interest by virtue of being the one item on the most recent New York Times Hardcover Graphic Books bestseller list I'd never heard of. It appears to be a North American edition (via children's books specialist Groundwood Books) of an Indian graphic novel released earlier this year from the Chennai-based Tara Books, a version of events from the Ramayana told from the perspective of Sita. I like the look of the art, created by Moyna Chitrakar in the Patua painted scroll tradition of West Bengal. More can be found in this interview with writer Samhita Arni. Preview; $24.95.

Archie Archives Vol. 3: Hey, you know which internationally recognized comics property has more than half a century's worth of content to reprint? The answer will be revealed next week, and probably the week after that, and over and over until we are reclaimed by the stars. A Dark Horse publication, featuring 224 pages of Pep Comics and Archie Comics material from the midst of WWII; $49.99.

Bloom County: The Complete Library Vol. 5 (of 5): Not Archie, but nonetheless an interesting IDW reprint project drawing to a close, presumably with the participation of creator Berkeley Breathed. Note that the publisher also has a twelfth(!!) volume of Dick Tracy out this week at the same price point; $39.99.

The CBLDF Presents: Liberty Annual 2011: I can't pinpoint exactly when the classic comic book 'annual' format became a weapon of choice for industry non-profit fundraising efforts, but both the Hero Initiative and the Comic Book Legal Defense Fund have now put out a small stack of the little projects, heavy on name-value artists and tangential dips into established properties. This year's 48-page, Image-published CBLDF lineup boasts a color story by Habibi creator Craig Thompson, along with new art by the likes of Frank Quitely, J.H. Williams III, Carla Speed McNeil, Matt Wagner, Dave Cooper, Fred Hembeck and others. Plus - Marvel and DC superhero pinups, possibly involving the American flag and one or more eagles; $4.99.

Who is Jake Ellis? #5: Image also remains your front-of-Previews home for very nice-looking genre stuff, and there's no denying the smooth, Tothian appeal of artist Tonci Zonjic, whose classical styling provides much of the identity for this Europe-set espionage/mystery/god-what-happened-to-me series, which I can't say I've enjoyed quite as much as contributors to the wall of praise on each issue's back cover. Writer Nathan Edmondson (also in this week's Grifter #2 at DC) has cooked up an irresistible high concept -- ex-CIA mercenary operative and Conspiratorial Mystery Experiment participant Jon Moore performs awesome man-of-action feats mostly due to the intercession of Jake Ellis, a seemingly all-seeing and possibly imaginary entity who doles out situational advice like a cross between Hobbes the tiger and Golgo 13 -- but save for some fun premise-establishing bits in issue #1 it's mostly added up to dry, expository conversations between the two leads and action sequences in which Ellis effectively explains to the reader what Moore is doing, which in practice (and the absence of any compelling plot justification or formal pursuit) strikes me as little better than just slapping down some narrative captions. Still, Zonjic and his capacity for keeping it visually lively are worth watching, and this end-of-storyline issue might demarcate an entry into more interesting territory for whenever the series returns. Preview; $2.99.

The Unexpected #1: Meanwhile, in other comic book-format anthologies, Vertigo courts memories of that late '90s period where it was putting out veritable slews of themed short subjects with its second 80-page giant (following Strange Adventures #1 from a few months back), featuring nine stories and a preview of an upcoming series. Keep an eye out for much-discussed illustrator and webcomics artist Emily Carroll, while Dave Gibbons, Jill Thompson, Brian Wood and Joshua Dysart represent Vertigo regulars. Covers by Rafael Grampá and Michael Wm. Kaluta; $7.99.

100 Bullets Deluxe Edition Vol. 1 (of 5): Another product of the late '90s was this crime series from Brian Azzarello & Eduardo Risso -- concerning (in simplest terms) people given the chance for revenge on the folks who wronged them via a mystery man and his set of untraceable bullets -- although, unlike all the Vertigo anthologies put together, it ran for ten years and 100 chapters. Similarly to the publisher's easy access reissue of popular series like Preacher, this new hardcover line seeks to cram a whole lot of material into individual packages, 456 pages' worth in this case, covering issues #1-19; $49.99.

The Shade #1 (of 12): This is also both sort of '90s and kind of an anthology, and also ostensibly part of DC's relaunch, seeing writer James Robinson return to his Starman cast with an extended anti-hero series featuring a succession of unique artists, potentially in the manner of a 1997 series also titled The Shade, noteworthy for turns by J.H. Williams III, Michael Zulli and Gene Ha, the lattermost of whom will contribute to the new series as well. Cully Hamner leads it off, with Darwyn Cooke, Frazer Irving, Jill Thompson and others to follow (if probably not in that order); $2.99.

Black Metal Vol. 2 (of 3): Speaking of comebacks, I think I recall some some really positive reactions from the 2007 debut of this Rick Spears/Chuck BB project, seeing a pair of metalhead brothers battle demons. Oni reprinted the original last year, and this is the continuation, probably worth a peek as a new example of manga collection-paced pop comics storytelling. Big preview/interview; $11.99.

glamourpuss #21: Tangential to (and likely unconscious of) the blips of new attention being paid to Cerebus, the writer Warren Ellis recently posted a reflection on the conceptual separation of "digital comics" and "webcomics," analogizing the qualities of each to, respectively, American Flagg! ("compression, jamming in as much material as possible to justify a purchase that still may not appear as valuable as an mp3 or a TV show episode while costing comparably much because people are fucking idiots") and Cerebus (pausing, spacing, wandering, rambling, and keeping flexible enough to nurture overlapping sets of readers consuming at different paces). Such comparisons also serve to reinforce the unique nature of glamourpuss, as digressive and visually-oriented as anyone's tumblr, while retaining more of a whiff of Godard in its essaying of comics in-comics, marshaling aspects of the form to inhabit and explore older works - if nothing else it'll go down in history as the first big comics series to give the practice of inking an absolutely central role; $3.00.

If You're Cracked You're Happy: A History of the World's 2nd Greatest Humor Magazine - Vol. 1: The Early Years (&) Vol. 2: The Final Years: DOUBLE-SHOT. A two volume retrospective of the 1958-2007 print edition of Cracked, from writer Mark Arnold and the Harveyville Fun Times. Interviews, photos and exhaustive checklists are promised; $34.95 (each).

Alan Moore: Conversations: Finally, your all-in-one-volume book on comics for the week - the 240-page latest in the University Press of Mississippi's line of selected interviews with notable folks, this time presenting ten chats with the prolific writer of [INSERT HILARIOUS OBSCURE TITLE HERE] from across the breadth of his work in comics. The selections are by academic and frequent Hooded Utilitarian presence Eric L. Berlatsky, and the emphasis is on "Moore's creative practices and techniques, along with his shifting social, political, and philosophical beliefs," per the publisher. Note that a considerably less expensive softcover edition will also be available. Sample quotes; $65.00.

CONFLICT OF INTEREST RESERVOIR: I first encountered Marti Riera's bonkers, politicized Chester Gould parody/riff The Cabbie in the 1987 Catalan edition, now re-translated and to be followed by a never-translated sequel per editor Kim Thompson (not to be confused with Marti's 2007 Calvario Hills #1, which will probably never see a #2); $19.99. And reaching even further back, Nuts collects the entirety of Gahan Wilson's National Lampoon strips from the '70s, with a new essay by Gary Groth; $19.99. 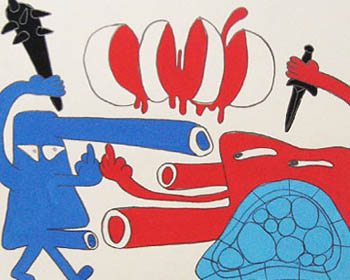 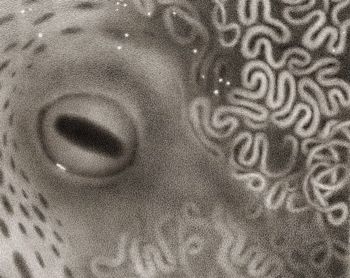