Ken Parille has some thoughts on the first issue of Ta-Nehisi Coates and Brian Stelfreeze's Black Panther.

1. This comic is a test. If a writer of Ta-Nehisi Coates’s rhetorical power cannot create an interesting, unusual superhero comic when working within the current “corporate production method,” then perhaps no one can.

2. It’s certainly unfair to make any book a test case, and, ideally, the production method should be irrelevant to our enjoyment or assessment of a comic. It’s just that, in practice, the contemporary editorially-driven, division-of-labor approach tends to produce slick comics that rarely rise above skillfully executed competence. (Black Panther #1’s credits list a writer, artist, colorist, letterer, designer, assistant editor, editor, executive editor, editor-in-chief, chief creative officer, and more.) Editors always have the final say. They’re charged with brand protection: corporate characters generate a lot of revenue, and when so much cash is at stake, it makes sense, they seemingly believe, to play it safe. Yet based on what he’s said in interviews, Black Panther #1 is exactly the superhero comic Coates wanted to create. His vision was in no way diluted by the editorial process.

3. Like many readers, I was excited when I learned Coates would be writing a comic. I assumed the result would be artistically less safe than most of what shows up in America’s comic-book shops every Wednesday. ...

And we also have day three of Sara Lautman's week making our Cartoonist's Diary.

—News. In a much-needed bit of good news for 2016, Atena Farghadani has been released from prison.

Ms. Farghadani was first arrested in August, 2014, after posting a cartoon on Facebook in protest of the Iranian Parliament’s plans to restrict women’s reproductive rights.

—Reviews & Commentary. Steve Duin makes the case that EC Comics are underappreciated for their progressive politics.

"This material is painfully relevant. Agonizingly relevant," [curator Ben] Saunders says. "I wish the spectacle of racist cops shooting African-Americans in the back was part of the bad old days. But it's not.

Robert Boyd writes about Rokudenashiko's What is Obscenity?: The Story of a Good For Nothing Artist and Her Pussy, about her arrest and imprisonment in Japan on obscenity charges.

Rokudenashiko specialized in non-fiction comics, and when she saw an ad for vaginal reconstructive surgery, she thought it might be a good subject for a first person non-fiction comic. After she had the surgery and documented it in manga, she had the idea of making a mold of her manko. She made a cell phone cover out of it and decorated it, calling it a “Deco-man.” A columnist saw it and suggested she do a workshop on making Deco-mans.

The problem was that pussy is quite taboo in Japan. She was accused of being a pervert and a sex addict, and her husband divorced her. She tried to make a living creating manko art, but it was impossible to publicize the work.

—Interviews & Profiles. Susan Cole speaks to Rokudenashiko in advance of her TCAF appearance.

Is there something about Japanese culture that makes your work especially vulnerable to attack?

There is a fixed and pervasive mentality that men can treat women’s bodies as objects, but women who express their own gender are not tolerated. Women who speak clearly about themselves sexually are reviled. On top of all this, I freely use the taboo word “manko” to refer to my vagina. “Manko” means pussy, it means cunt. It can be very derogatory, but it’s used very casually and without weight to refer to the vag (by women), and is a normal part of pillow talk as well. The only place it’s not used is the doctor’s office. Well that, and the police station....

For The Fader, Zainab Akhtar has written a profile of Annie Koyama and Koyama Press.

For its first six years, Koyama Press functioned somewhat like a non-profit organization: Annie funded local artists’ ventures—street art, zines, comics—then gave them all the proceeds. An insomniac, she spent nights scouring the internet for the work of young, little-known cartoonists and gave them the opportunity to publish their comics, often for the first time. On an immediate level, Annie’s generous yet meritocratic approach validated the work of artists who were otherwise written off by the established alternative comics community, which often views this new generation of cartoonists working primarily online as somehow less legitimate.

It's a solid piece, but I'm a little baffled by the claims in the last quoted sentence; I can't recall seeing any resistance at all to Koyama's artists, certainly not from the alternative comics community, where everyone seems to love Annie and her roster. But maybe I'm looking in the wrong places. A minor point in any case.

I’m not into [Charles] Burchfield’s realistic work. The periods I like are a summer he seems to have had as a 17-year-old, and his late period, from his 50s on I think (I’m making an effort not to Google this). He then even picked up some of his adolescent watercolors and expanded on them, adding pieces of paper as you’ve seen. Some of these early watercolors, and all of the late ones, have something psychotic about them. Sound, touch, all the other senses come into play, heightened, translated into inventive marks with a brush. He makes mosquitos and electric wires buzz, birds fly by too fast to see, the sunlight causes mirages, and the sun itself becomes a black dot, as would appear when you look at it for too long. This psychotic vision, or just a clear and more complete vision if you like, has been linked to effects caused by his heart medicine. I don’t know how that explains the adolescent watercolors…maybe teenagers tend to get a bit manic-psychotic in summer. Now I’m thinking of Newton… Anyway, the idea of this very rural, doughy-looking quiet type, standing in a marsh with his rubber boots, doing magnificent and visionary watercolors because of his heart pills, makes me happy.

The most recent guest on Inkstuds is Caitlin Skaalrud. 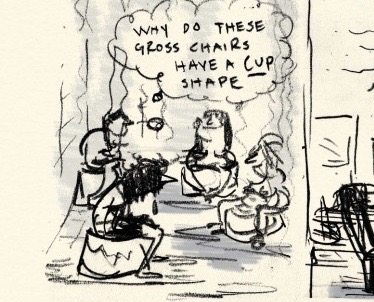 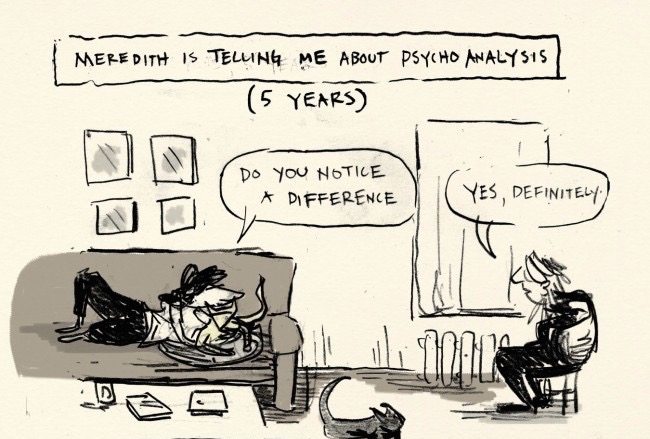