Though plenty of alt-comics readers may not realize it, Ed Luce is one of the brighter cartooning talents to emerge in the last decade. Reading his comic book series Wuvable Oaf makes one realize that he emerged as a fully-formed talent who can draw anything. Some have referred to the series as "the gay version of Scott Pilgrim," but I find that description not entirely accurate. To be sure, Bryan Lee O'Malley is an influence here in the sense that the comic follows around various bands, spends a lot of time at gigs, details the political and interpersonal tensions that bands experience, etc. Luce even gives O'Malley a tip of the hat by drawing some of his characters into crowd scenes--among the many, many other characters and art styles he seamlessly imitates and weaves into those amusing scenes. However, I'd argue that Scott Pilgrim is a far more mainstream effort, due in no small part to its fusion of familiar manga art stylization, video game culture, and a propulsive storytelling style that focuses on action and fights. Moreover, each volume of Scott Pilgrim has a fairly tight storytelling structure, as Scott deals with a different emotional or relationship issue that's personified in the evil ex that he must wind up battling at the end of the book. 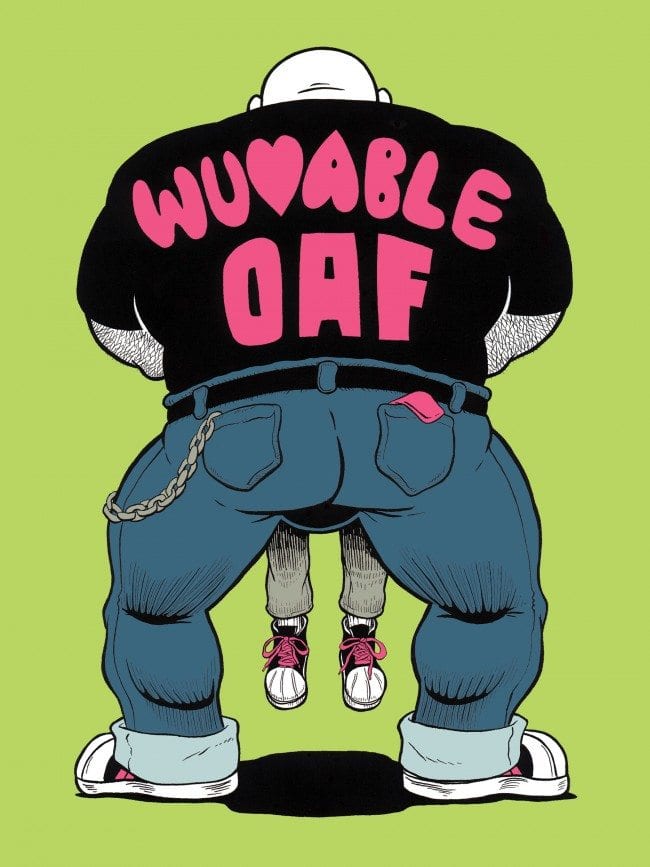 Luce's storytelling structure is far more loose, and in some ways, far more self-indulgent. I mean this in the sense that Luce simply writes about everything that interests him and throws it into one big stew. He's a huge music nerd and manages to throw in references to everything from death metal to dance music to Morrissey to punk. He's a knowledgeable fan of professional wrestling, so of course his lead character Oaf is a former pro whose nom de ring was Gote Blud. Luce can't help but throw in musical puns and references, as Oaf's finishing move involved him wearing a goat horn mask that spewed fake blood and was called "Raining GoteBlood"--a reference to the band Slayer. Luce is fascinated by cats, and so the cats here have weird fantasy lives of their own. And of course, Luce is gay and writes extensively about gay culture, particularly what he refers to in the comic as "oafs and bait"--big, frequently muscular and sometimes fat men (popularly known as "bears," though Luce puts the kibosh on that term here) and their smaller lovers. There are elements of magical realism and just plain weirdness at work here, such as when the cat's hair sometimes take on a life of its own or a future story where Oaf is the savior of the new cat race. 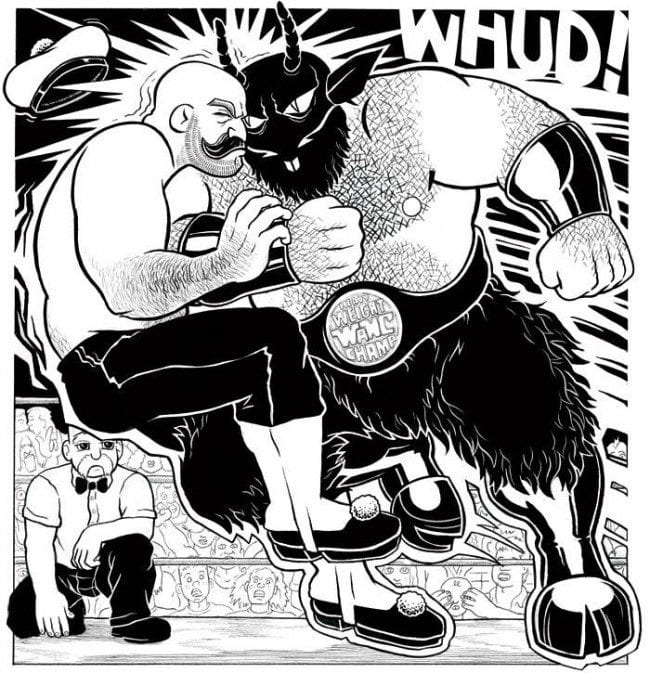 The obvious alt-comics comparison is Jaime Hernandez, not O'Malley. Like Luce, Hernandez was raised on a steady diet of mainstream superhero and Archie comics. Hernandez also loved to write about the melodrama in the wrestling ring. Hernandez made sure to write about things he knew and loved: Latino culture, punk rock, and strong women. Hernandez also didn't take long to refine his line and become one of the greatest draftsmen in comics. Hernandez has never written a "graphic novel" to this very day; instead, he prefers short vignettes that jump back and forth in time, and he sometimes collects longer storylines as they add up. Similarly, Luce is self-publishing actual comic books and frequently writes short stories for anthologies and specials starring his characters. Like Hernandez, Luce is taking his time with what is the only real narrative that can be discerned thus far in this series, preferring to simply let the reader hang out with his characters in other settings. 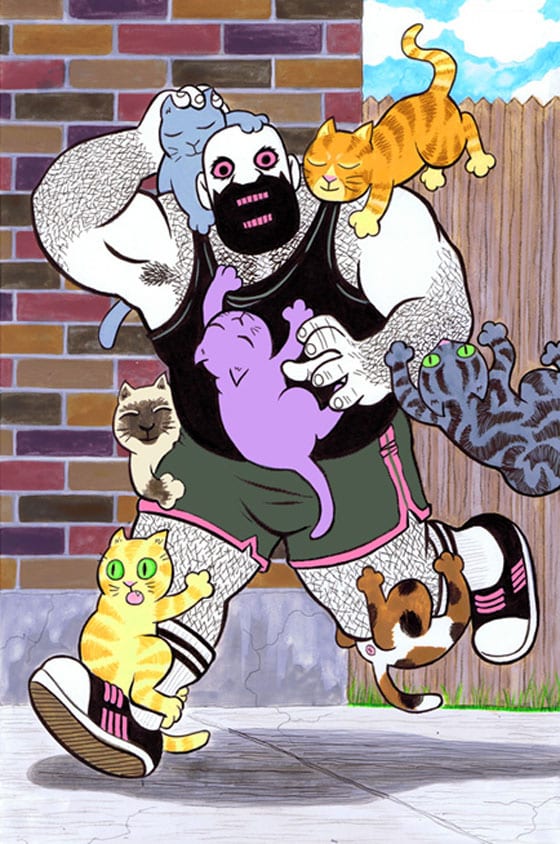 One early critique of Hernandez's comics was that they were still a bit mired in their mainstream roots. Luce's comics are certainly light and light-hearted, with a focus on comedy being one of his key aims. And at its core, just like Jaime's Locas stories, Wuvable Oaf is a romance comic. It's just that this relationship is mediated through slightly ridiculous, larger than life characters. The star of the show, Oaf, is a huge hirsute man with a thick black beard. Luce loves using, a thick blocky character design that's highly stylized, especially when it comes to faces. His characters' faces have huge eyes, thick eyebrows, and the kind of exaggerated features that look a bit like those drawn by Bob Fingerman. The object of Oaf's affection is a charismatic smaller man named Eiffel, who's the lead singer of the black metal/queercore/"progressive disco grindcore"/etc. band Ejaculoid. Luce weaves between the friends, associates, enemies, ex-lovers, and pasts of both men as he tells a story of how they meet and go out on a date as the main spine of the narrative. 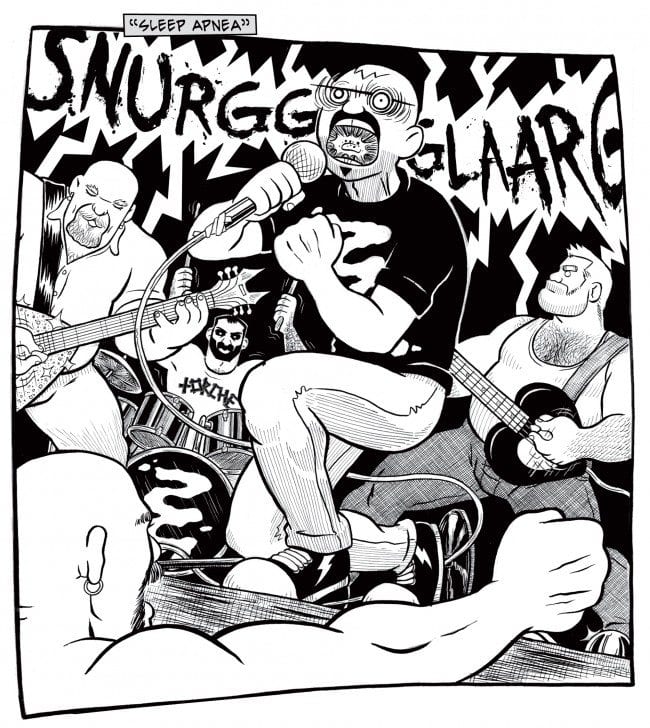 Luce's storytelling style is very much like Oaf himself. On the one hand, it's gentle and even sweet, as the reader can see the burgeoning affection between the two men, even as the odds are very much against them actually working out as a couple. On the other hand, Luce's sense of humor is very much in-your-face and gleefully crude. While there are occasional sex scenes and some nudity, this comic actually has far less sexual content than Locas. However, Luce loves jokes and scenes about fluids. "Pee-Shy" is a hilarious story about Oaf finding a way to please a piss-seeking man he meets in a bathroom despite being too shy to urinate in public. The t-shirts for Ejaculoid resemble ejaculate hitting a wall. There's a gloriously gross scene in which an ex-boyfriend of Eiffel grinds up hair and blows his nose (and other organs) into waffle mix to make Oaf sick, to no effect. And of course, Luce is entirely at ease in depicting the ways in which sex and friendship can become blurred concepts, particularly in the gay community. The women in the book are the least developed characters, but the hints we get of Dorissey (a lesbian who does Morrissey covers with a gender-switched take on every song) and the Muff 'n Tops Girlz show at least Luce's budding interest in expanding his focus. 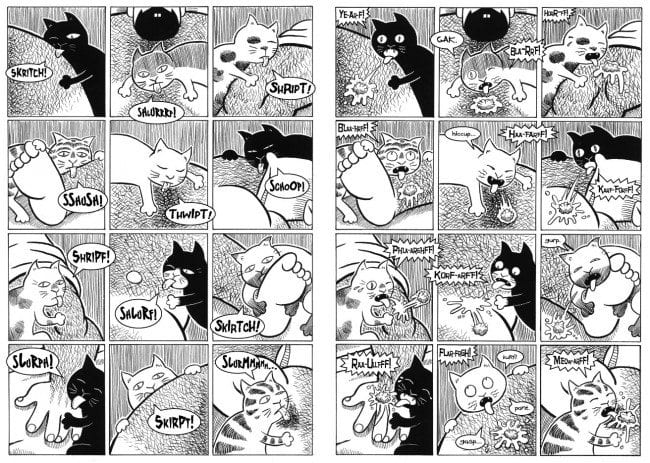 What Luce has going for him in the first five issues (including a #0) of Wuvable Oaf is a certain novelty and shock value. No one to my knowledge has ever done comics about these kinds of characters in these kinds of situations, even if the actual plot and character interaction is quite familiar. Luce's crazy attention to detail and the decorative aspects of comics is a big part of its visual appeal. The extras he's sold for special editions include painted 45 rpm records, complete with color illustrations on the sleeves and a URL for the actual songs "performed" by Ejaculoid. He's sold a backstage pass featured in one issue that becomes a plot point. He's done flip covers, comics on metallic paper, full color comics, cut-out beards (!), and any number of other fun tricks. He uses a surprisingly effective digital font for each and every character that makes following long conversations between characters much easier. When that novelty fades, what remains is that as a storyteller, Luce's page design is conventional. His panel-to-panel transitions are basic and the general layout is not unlike that of a typical mainstream comic. He doesn't use a grid either, locking his characters in a tight structure; instead, he's a bit all over the place, changing styles as the story demands. 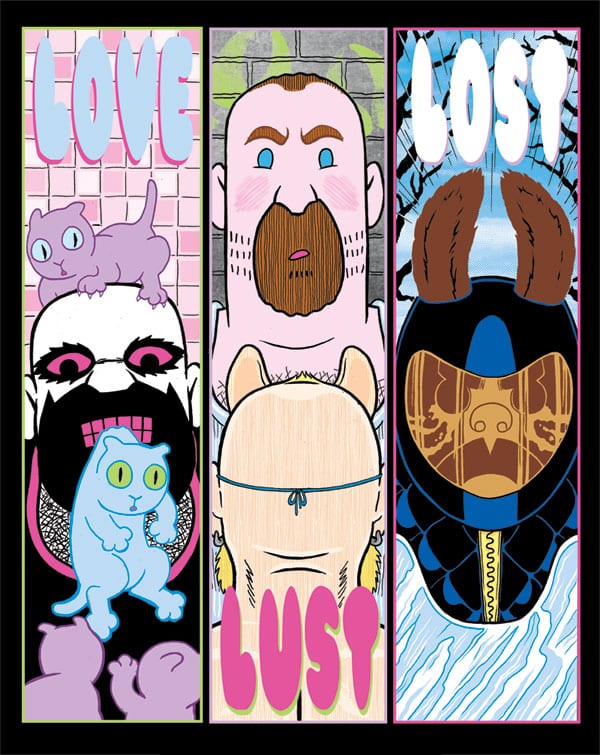 Luce is first and foremost a humorist and has found a formula that works. At the same time, if that comparison to Jaime Hernandez can be extended one more time, I get the sense that Luce is capable of much more as a storyteller. There have been some signs that Luce is ready to give his characters more depth and add some shading to their larger-than-life qualities. That was certainly true in the most recent issue, Wuvable Oaf #4. Sure, there were the usual shenanigans like killer dolls, cat hallucinations, and an over-the-top art show (featuring a cast of alt-comics extras), but Luce spent a lot of time building both Oaf and Eiffel into believable, if slightly unhinged and flawed characters. The genuine tenderness between Oaf and his adoptive father, Lil Papa, is one of the highlights of the series. The short story "Love Lust Loss" (originally published in Rob Kirby's anthology Three #3), however, points to a different direction for Luce. It's by far his most innovative in terms of layout, as Oaf, the perpetually horny Smusherrr and Oaf's friend Bufu all personify the three titular concepts in a silent story. For Oaf, it's about the love he has for his cats, even when one bites him. For Smusherrr, it's about accepting a particular and weird kind of lust and worship. For Bufu, it's about mourning the loss of a loved one. 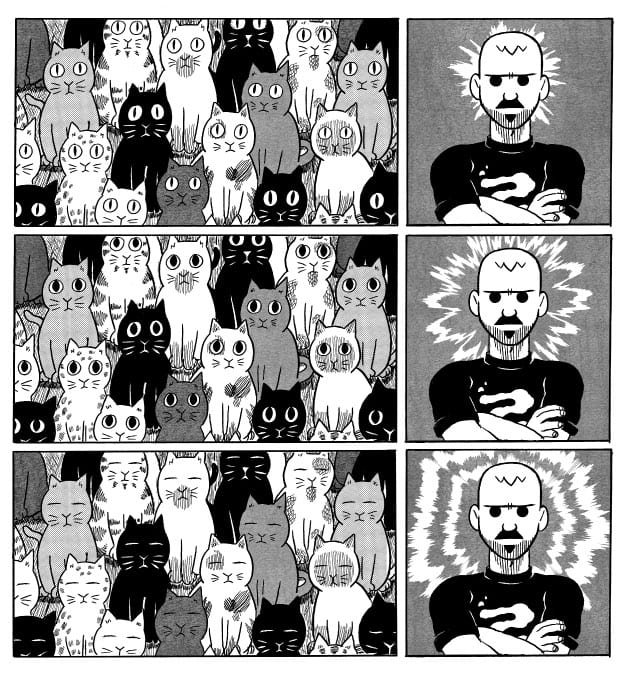 There's a certain flexibility in telling Oaf's story that allows for a quieter, more contemplative take on his life. Luce proved he's capable of doing so in the above story, and I'll be curious to see if he continues to explore and experiment more with his narrative tone and actual storytelling techniques rather than just the flashier, more fun, and glossy decorative aspects of his comics. It's obvious that Luce is trying to avoid being pretentious or ponderous in terms of his storytelling and themes and has little interest in being more overtly political or didactic. It can be argued that in this case the personal is very much political, and the simple act of writing and drawing these stories in an uncompromising fashion is a political act. That said, this comic is at its heart about relationships, and stories about relationships can always be told with restraint, nuance and subtlety while still retaining their essential comedic and even absurd tendencies. The comic seems to be slowly moving in this direction, a reflection perhaps of Luce's evolution as an artist. That's the case both in terms of how Oaf and Eiffel grow as they become part of each other's lives, as well as the funny, memorable anecdotes Luce creates for stories about live shows, band practices and the ways in which memories and bonds are created through such experiences. The flexibility of Luce's storytelling structure will allow him to go even further in telling serious, affecting stories without overstretching his characters past the point of recognition. Luce remains a humorist who is equally adept at depicting visual gags, dropping obscure and funny references, and putting his characters into absurd situations. One thing that's certain is that Wuvable Oaf is a touchstone alt-comics series that should be read by a wide audience. 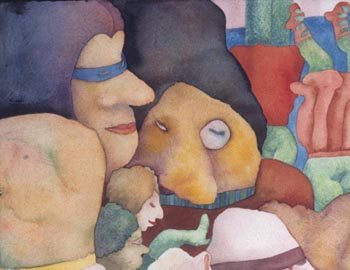 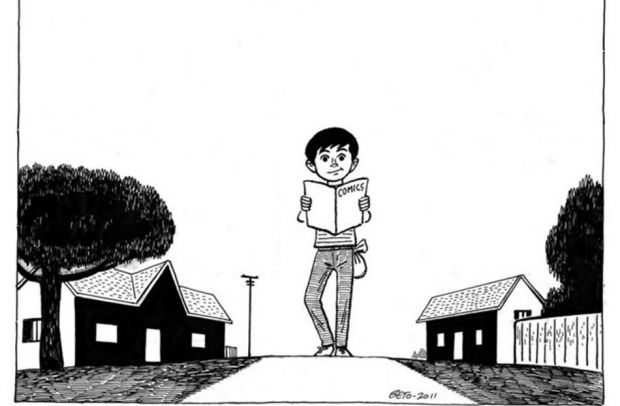