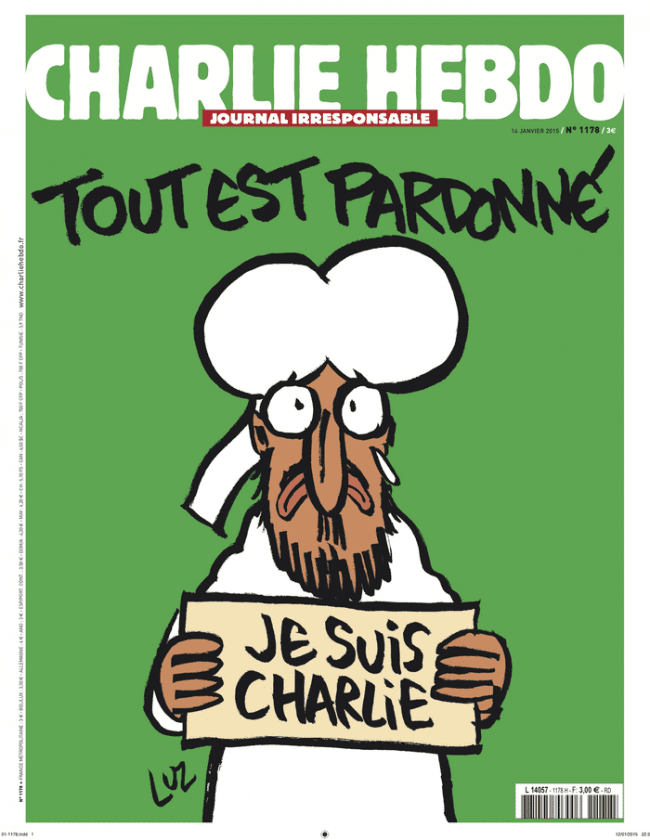 EVERYTHING IS FORGIVEN is written across a beautiful green background, the color of Paradise. A man wearing a turban and white garments of mourning sheds a tear while looking straight at us. Context tells us that this must be a depiction of the prophet Muhammad. He holds up a sign saying JE SUIS CHARLIE.

That is the cover of last week’s much-awaited issue of Charlie Hebdo, no. 1178. The first published after the massacre at the magazine’s offices, and printed in five million copies distributed around the world in a number of languages. The drawing is signed Luz, for Renald Luzier, arguably the most prominent cartoonist still alive at Charlie. He overslept to draw another day.

The cover combines reflection with provocation. In contrast to most of the magazine’s earlier depictions of the prophet, it is quietly insistent rather than balls-out transgressive. Charlie maintains the right to draw the prophet, and considering what has happened, it had to be that way. Anything else would be a capitulation. The enormous print run furthermore makes this image a real contender against Kurt Westergaard’s infamous "Bomb in the Turban" for the most widely seen depiction of the prophet.

But this image is also an attempt to reclaim Muhammad from the murders. A signal that the prophet and his teachings are not the property of fundamentalists, but a faith shared by a huge chunk of the world’s population. And not only that, they also belong to those of us who do not follow them. Because who is really being forgiven here? The message is ambiguous, but it seems first and foremost to be the viewer, looking at the picture of the prophet, interpreting it. Perhaps we share responsibility, perhaps not. But we are all forgiven. Even the terrorists.

Are the arch-atheists of Charlie (cheekily) turning the other cheek? Are they committing to a religious notion of forgiveness and salvation? Editor-in-chief Gérard Biard has denied absolving the murderers of their guilt, but beyond that he has dodged the issue. The cover clearly just “felt right” for the people involved. It was in a sense bigger, more generous, than anything they could put into words. Luz’ emotional account at last Tuesday’s press conference says all. The cover makes you both laugh and cry. Such is the power of the cartoon with its synthesis of image and text.

In his editorial, Biard denies any sudden spiritual conversion on the part of the staff, however. He furthermore rejects with clear disgust the accusations of racism, Islamophobia, and "fanning the fires" made against Charlie, both before and after the massacre, asserting the vitality of their endeavor to any society wishing to remain free. He acknowledges that the tragedy last week is in part the product of larger social and geopolitical conditions, among them social marginalization, the Israel-Palestine conflict, Western involvement in wars in predominantly Muslim countries, and so on, but “Luckily, we have tools with which to try to solve these problems, but none of them will work if we do not have what is essential: la laïcité.” By this he means the strict division of church and state, which is so fundamental to French identity that they have a special noun for it. “Because it furthers universal rights, only by having it can we exercise freedom, equality, brotherhood, and sisterhood.”

The editorial is accompanied by a variety of mostly mediocre cartoons, some of which address the issue at hand, others that fire right and left. Most pertinent is a decade-old one by Wolinski—one of the victims of the massacre—showing the ample backside of a woman with the French anarchist slogan NI DIEU, NI MAÎTRE! tattooed on her left buttock along with a heart, and the French law on the separation of church and state of 1905 referenced on her tank top. The dirty old man of French humor cartooning typified.

As promised, they are all there in the magazine, the deceased represented by inventory. Little amusing sketches of cartoon characters by Charb, Charlie’s former editor-in-chief and its most ferocious Muhammad-renderer, proliferate across a few pages, but without real punch. The great Cabu is represented with a selection of sub-par cartoons, several of them on Islamism—one is titled "Yalta in the Vatican", and shows an imam, the pope, and a rabbi clustering around a globe, dividing it among themselves. OK, but it has been done better before. Tignous is similarly unimpressive here.

Honoré comes off better. A selection of his striking linocut-reminiscent cartoons dot the pages, including possibly the most mordant in the magazine: an imam representing the Islamic State’s threat to circumcise four million women between the ages of 11 and 46: “For that too, we will be asking international volunteers for help.”

The cartoonists who are still alive have the advantage of being able to respond to the tragedy; this has yielded some decent cartoons, or as decent as one could have hoped from the decimated staff working under what must have been a state of shock.

Luz, Coco, Catherine Meurisse, and Loïc Schwartz all contribute reportage from the mass demonstrations in Paris on January 11, with David Ziggy Green providing a British perspective from Trafalgar Square. These strips as well as the attendant columns are characterized by mixed feelings. On the one hand gratitude for the massive turnout, on the other disgust with parts of their newfound support from people such as Nicholas Sarkozy, Angela Merkel, Benjamin Netanyahu, Vladimir Putin, and Front National leader Marine Le Pen. “I vomit on all our new friends,” as cartoonist survivor Willem so eloquently put it a few days after the massacre. Also, much mirth arises from the fact that Arnold Schwarzenegger, inexplicably, has become a subscriber.

The best cartoons are the ones that, like the cover, manage poignantly to straddle the divide between reflection and provocation. Syrian-French cartoon superstar Riad Sattouf contributes an installment in his ongoing strip La vie secrète des jeunes, which is based around (allegedly) overheard conversations between young people. A French Arab tough hangs at a corner in Paris’ tenth arrondissement discussing the massacre on his cellphone. He assures his interlocutor that he "could give a fuck about Charlie Hebdau," but that you simply do not kill somebody because they say something you do not like. Street-level Voltaire wittily written in sociolect.

Walter Foolz provides an international perspective, reminding the readers that worse atrocities took place that same week. Following the horrifying killings around Baga, Nigeria, a Boko Haram fighter says to another, “Well, that’s 2,000 subscribers that Charlie Hebdo won’t get.” And Luz hits an elegiac tone with a strip depicting six ages of the cartoonist, from toddler to octogenarian, drawing "small funny characters" for each of which he draws a small, funny cartoon portrait of his murdered colleagues, ending with Wolinski, whose balding, aged physiognomy links him directly with the child at the beginning.

Lastly, the back cover shows us the alleged "covers which we were spared from." Several of them are fun, such as the one by Meurisse that shows smiling Bangladeshi sweatshop workers sewing “Je Suis Charlie” t-shirts, or the one by Foolz that depicts the Kouachi brothers dying in the Roissy print shop, recognizing the irony and agreeing that it is all a little too intellectual. It is quite affirming thus to see the Charlie cartoonists wring humor from their own tragedy.

What the guts of the magazine do not contain, perhaps surprisingly, are representations of the prophet. But it makes sense. It would detract from the disconsolate Muhammad on the cover. It would be redundant. Only he shows the maturation that necessarily follows in the wake of tragedy, all the while staking the essential claim. 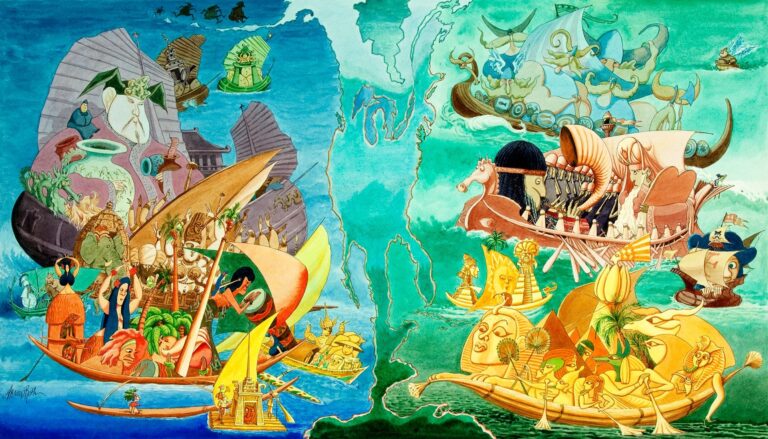 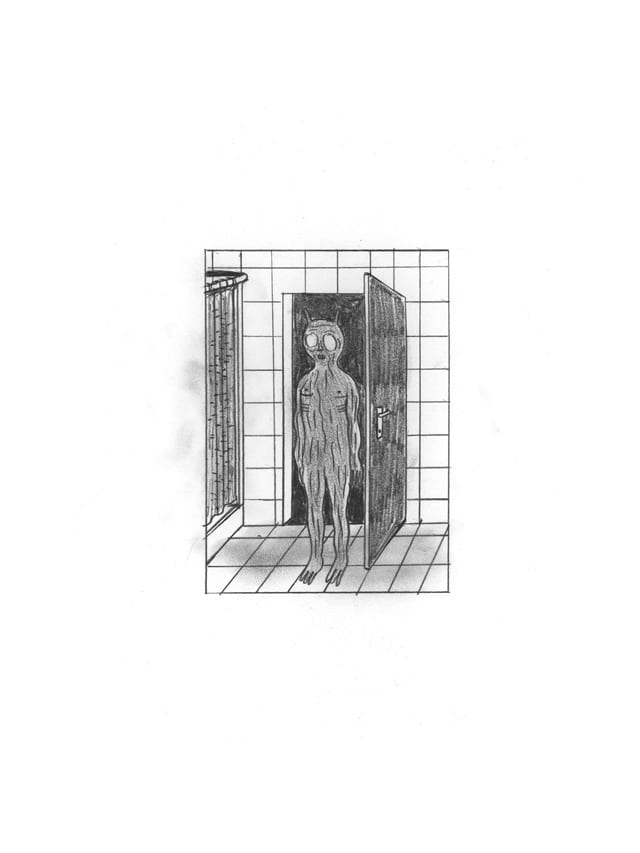 Waiting for the UFOs