The history of the cartoon figure who represents the United States of America is, itself, a sort of symbolic encapsulation of cartooning: Uncle Sam evolved by blending the verbal and the visual like any good cartoon. First came the verbal, which emerged during the War of 1812.The story, though disputed, is that the term “Uncle Sam” referred, at first, to a businessman in Troy, New York, Samuel Wilson, who was affectionately known as “Uncle Sam” Wilson. He inspected beef and pork purchased for the government during the War. The barrels of meat were stamped “U.S.” to indicate

The story, though disputed, is that the term “Uncle Sam” referred, at first, to a businessman in Troy, New York, Samuel Wilson, who was affectionately known as “Uncle Sam” Wilson. He inspected beef and pork purchased for the government during the War. The barrels of meat were stamped “U.S.” to indicate property of the United States. They were also stamped “E.A.,” the initials of the contractor, Elbert Anderson, who supplied the provisions. His workmen understood what “E.A.” meant—the name of their boss— but facetiously wondered who “U.S.” was. Some wag supposedly supplied an equally facetious explanation: the initials stood for Uncle Sam, who inspected the meat. And so were the United States and Uncle Sam conflated.

“Uncle Sam” meaning the United States appeared in newspapers from 1813 to 1815; in 1816, he appeared in a book in that symbolic role. By the 1820s, “Uncle Sam” was often being used as a term for the United States. The Sam Wilson connection seems a little shaky to me, but Congress passed a resolution in 1961 that recognized “Uncle Sam” Wilson as the namesake of the national symbol.

The visual representation of Uncle Sam, a tall man with a white goatee wearing a top hat, swallow-tail coat and striped trousers, evolved from pictures of an earlier symbolic figure—Brother Jonathan.

Until the Civil War, goateed and top-hatted Brother Jonathan in striped pants often stood for the United States even though the cartoon character initially represented just New England. The term Brother Jonathan originated across the Atlantic during the English Civil War (1642-1651) between the Parliamentarians (“Roundheads”) and the Royalists (“Cavaliers”) as a somewhat derogatory name for the Puritan Roundheads, and then the name was also applied to the New England colonists, who were also mostly Puritans who also supported the Parliamentarians in the mother country. By this route, Brother Jonathan became a stock character that good naturedly lampooned Yankee acquisitiveness and other crafty peculiarities attributed to citizens of the region. 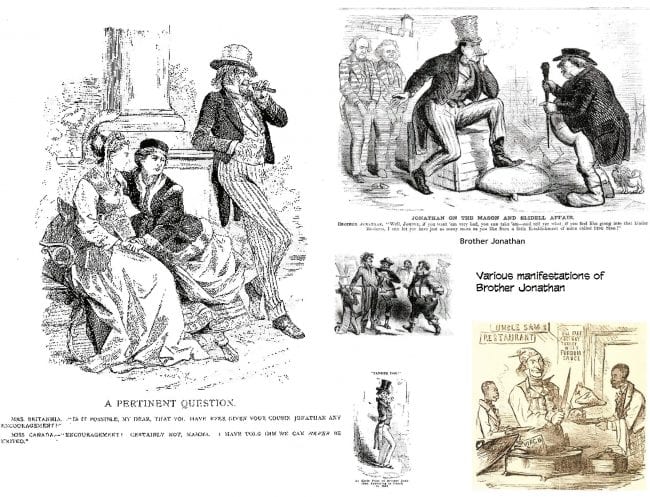 In the accompanying visual aid, Brother Jonathan is the spitting image of Uncle Sam in two of the larger images. In the first, on the left, he is identified in the captions (which we repeat here in italics because they’re nearly illegible in the picture).

Mrs. Britannia: Is it possible, my dear, that you have ever given your cousin Jonathan any encouragement?

Miss Canada: Encouragement! Certainly not, Mamma. I have told him we can never be united.

At the upper right, Brother Jonathan is again identified in the captions, addressing John Bull, the symbol of England.

At the lower right, Brother Jonathan’s top hat has been replaced by a headkerchief, and the sign on the wall behind him gives him away: he’s already begun to evolve into Uncle Sam.  A weekly newspaper called Brother Jonathan was first published in 1842 in New York, exposing the character to parts of the country outside New England. And in 1852, a humor magazine, Yankee Notions, or Whittlings of Jonathan’s Jack-Knife, gave the character additional visibility. According to St. Wikipedia, about this time, the New England-based Know Nothing Party, which Yankee Notions lampooned, was divided into two camps—the moderate Jonathans and the radical Sams.

According to an article in The Lutheran Witness of 1893, Brother Jonathan and Uncle Sam were two names for the same person. “When we meet him in politics, we call him Uncle Sam; when we meet him in society, we call him Brother Jonathan.” I suspect that such a fine distinction had a very short life—if, in fact, it survived anywhere outside the pages of The Lutheran Witness.

At Harper’s Weekly through the 1870s, we can watch the evolution of Brother Jonathan into Uncle Sam under the pencil of Thomas Nast. In the image on the left of our first display near here, dated May 1871, the character, named Jonathan in his encounter with Britain’s John Bull, seems somewhat scruffier in appearance than in his later Uncle Sam incarnation. Ditto in the next cartoon, dated December 1871, that appears on the right in our first exhibit.

But by April 1876, in the cartoon on the left in our next display, Uncle Sam (dubbed “U.S.” by Nast) has acquired a rather dignified aspect, which he will retain thereafter. 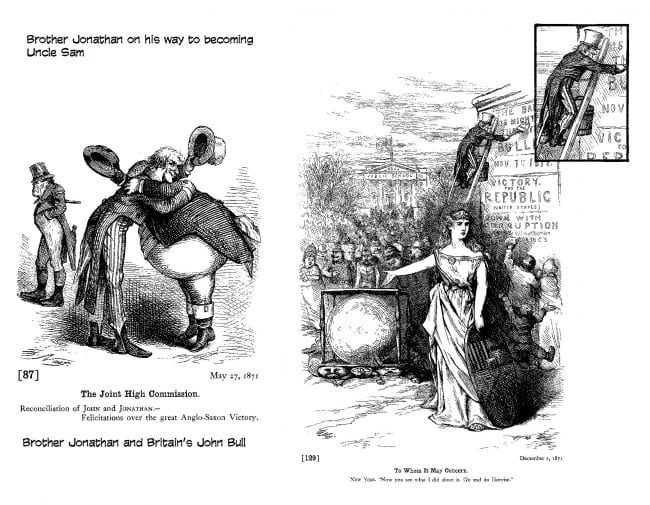 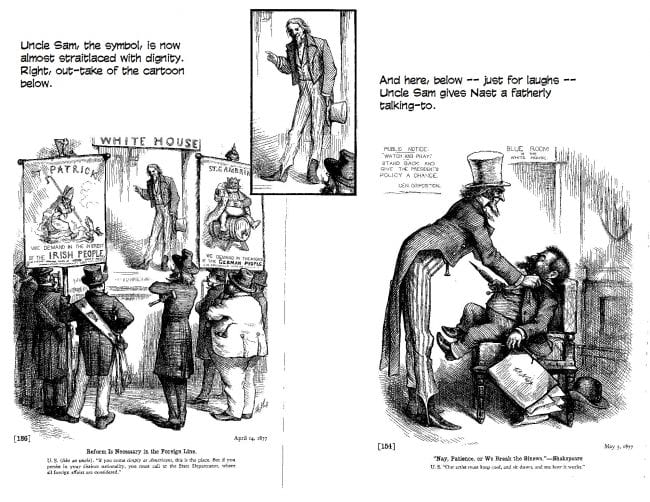 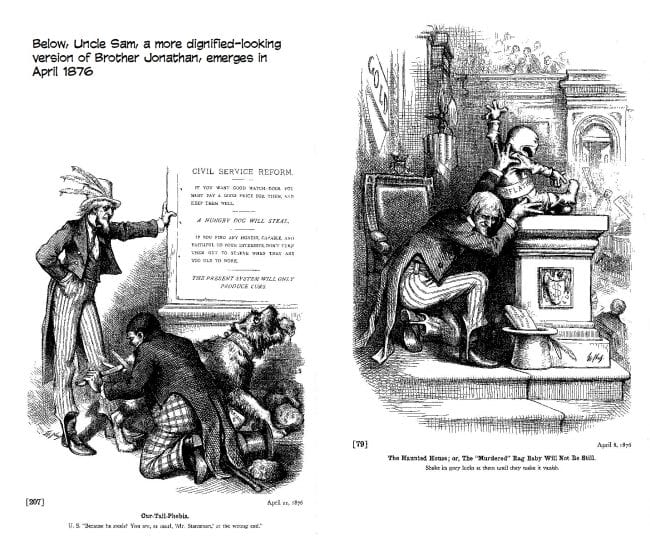 Some sources say that Yankee Doodle Dandy is somehow incorporated into Uncle Sam, but I don’t agree: Yankee Doodle Dandy appeared only in the lyrics to a song—no pictures— and neither Brother Jonathan nor Uncle Sam reflect any of his lyric personality although in two of Nast’s images that we’ve just looked at, Uncle Sam has feathers stuck in his cap as Yankee Doodle is purported to have done, calling them macaroni.

According to David Segal in the New York Times, July 1, 2017, “the song has only a nominal connection to pasta. The macaronis were members of a subculture of British fops in the 1760s and 1770s, who took their name from the Italian ingredient that would have seemed exotic and sophisticated in England at the time.” During the American Revolutionary War, British troops sang “Yankee Doodle” as an insult: “They were suggesting that American soldiers were gay,” Segal says. And with that, we’ll abandon this detour into only tangential intelligence and return to our subject.

Brother Jonathan had long since disappeared by the dawn of the Twentieth Century, and when famed illustrator James Montgomery Flagg (using his own face as a model) painted Uncle Sam’s portrait for a recruiting poster during World War I, Uncle Sam was firmly established as a symbol for the United States and would evolve no more. 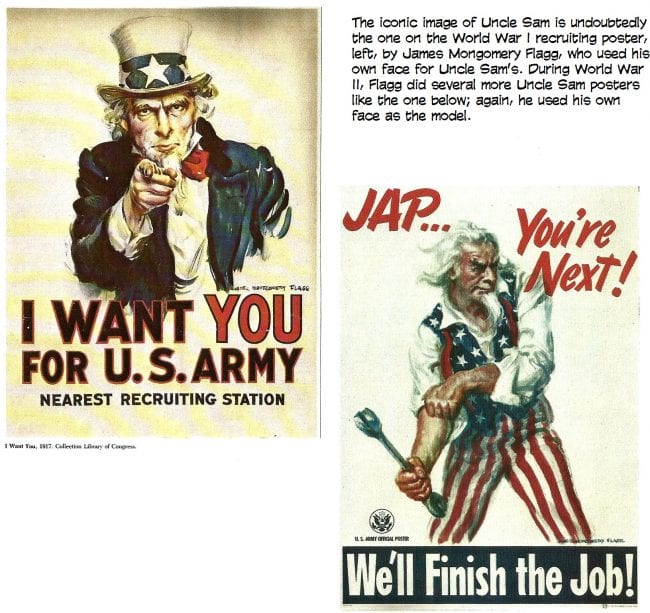 The Flagg interpretation and numerous other renderings of Uncle Sam conclude this foray into the patriotic pictorial past. All the pictures posted near here come from a collection of Uncle Sams owned by a Florida editorial cartoonist Bob Meagher (1913-1994). They were assembled and published in 1998 in America’s Favorite Uncle: Cartoonists Draw A Legacy (Calm Publications, Milton, Florida). If you keep an eye on the signatures as you browse this gallery, you’ll see some names famous in the history of cartooning—Zim, for instance, and editoonists Fred O. Seibel and Cecil Jensen, and the founder of the Landon Correspondence School of Cartooning not to mention the creator of Pogo. How many others do you know of? 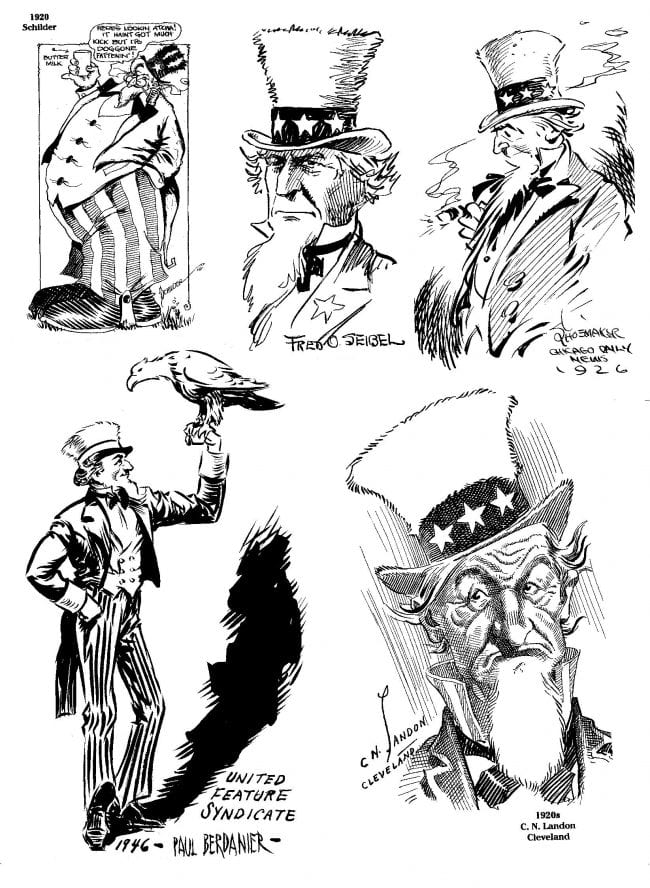 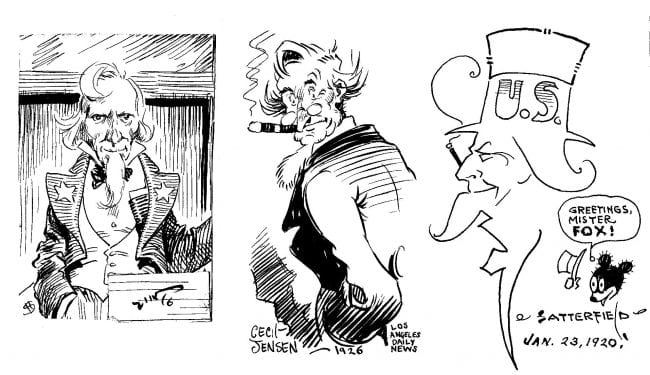 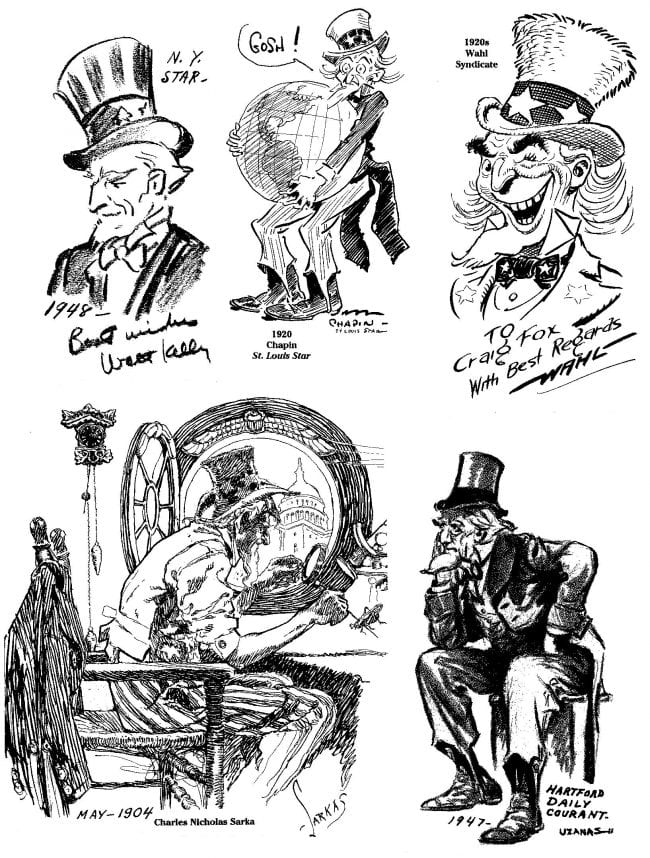 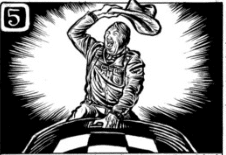 Choose Your Own Apocalypse 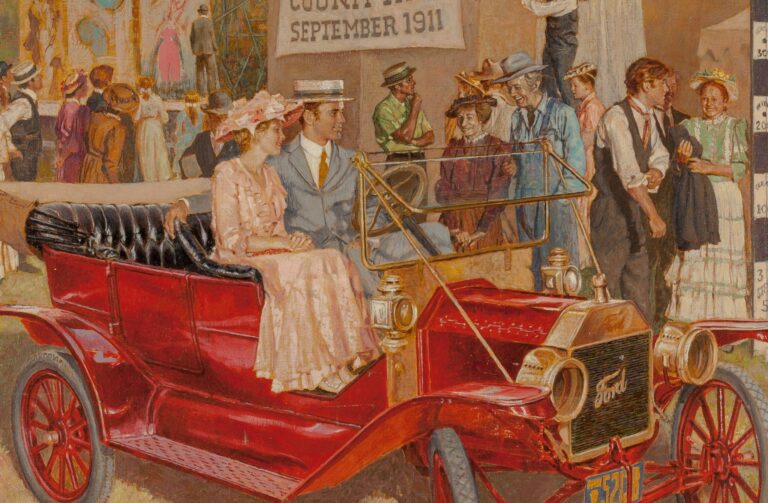 Years and Years Ago