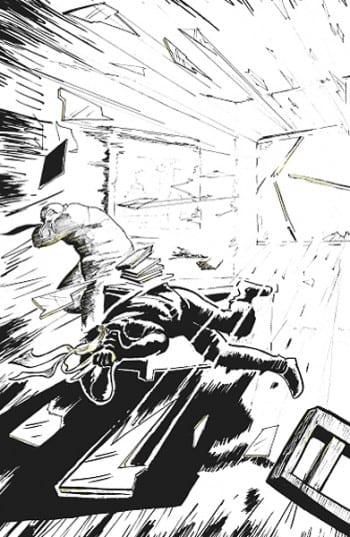 The noticeable rise of comics as a viable field of instruction at art schools, as well as the rise of comics-only art schools, has been well-documented over the past decade. What has been less discussed is the pedagogy of comics at traditional four-year colleges, though there have been a few schools here and there who have made the study and/or creation of comics a priority. Ohio State's Billy Ireland Cartoon Library & Museum has made the school a center of comics research. The University of Florida has held symposiums about comics for some time now. Duke's extensive collection is notable for its focus on zines and the small press as well as mainstream comics. The University of Cincinnati has Carol Tyler on their faculty in the fine arts department. However, I've yet to see any school with such a particular and exhaustive focus as Stanford, with its Graphic Novel Project.

Initiated in 2008 as part of the creative writing program at Stanford, the GNP is the brainchild of writers Adam Johnson and Tom Kealey, who acted as series editors for the first three years. Neither man is a cartoonist, an oversight corrected in the second year of the project by adding on Dan Archer as the program's art director. Archer is an interesting cartoonist, a graduate of the Center for Cartoon Studies whose journalistic comics focus on social justice. This makes him uniquely qualified to serve on this project, given its four central ideological tenets that have more to do with activism than aesthetics. These tenets are as follows: "1) That the telling of a human story is a deeply necessary enterprise, one worthy of study and creative devotion; 2) That writers and artists have a duty to tell the stories of others who, for whatever reason, have less of a voice in the world; 3) That sourcing stories from the real world increases their capacity to do good, seek justice and bring about change; and finally 4) That through collaboration, a story can become richer, more inspired, and more layered with human experienced." 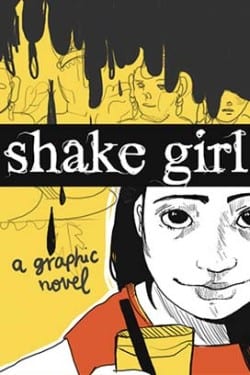 The GNP's first entry, Shake Girl, is a 213-page book that was conceived and finished by a team of fifteen writers and artists in an astonishing six weeks. Though the end results were highly uneven, the mere fact that this group of students (who presumably also had full workloads at one of the most prestigious schools in the country) were able to complete this task in the aforementioned time frame is amazing. That said, while the project clearly had ambitions of being a professional "graphic novel" (a term that made me cringe every time the editors used it instead of "comics"—even worse was "graphic novelist" instead of "cartoonist), it wound up looking painfully amateurish. The art was sloppy and had little page-to-page continuity. The editors didn't think to find ways of mixing different art styles in different chapters for emotional or dramatic effect. The story, which is based on the real-life experience of a young Cambodian girl who gets romantically entangled with a married politician and is then scarred by an acid attack engineered by the man's wife, feels padded at over 200 pages. There was probably a good story that could have been crafted about this incident, but Shake Girl certainly isn't it. There were other oddities about the book as well, like having five of its authors declining to reveal their last names in the credits. 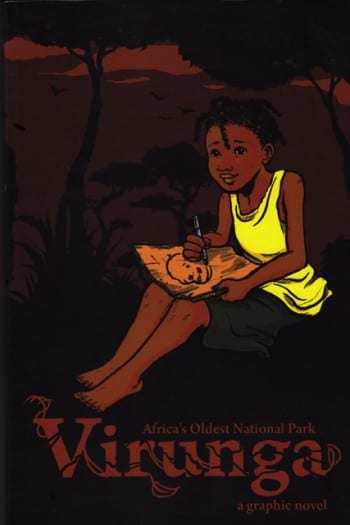 Archer came on board with Virunga, the GNP's second entry. He made a key change, adding a thumbnailing team to the artists and writers, which made sense given that the roster of creators swelled to eighteen in the second iteration of the project. (Every student is also supposed to participate in post-production work, lettering, scanning, coloring, editing, etc.) The 215-page book was scheduled for completion in ten weeks, but it took seven months--a fact that was not lost on the project's editors and stewards. If Shake Girl felt padded and slow, Virunga's problem is that the crew probably tried to address too many themes and ideas at once in a kitchen sink approach. It's a story about the rangers who try to protect the world's only remaining silverback gorillas in the titular park in the Democratic Republic of the Congo. Each of the four rangers in the story has his or her own story, one of which touches on the issue of rape as a weapon of war. The book takes on children being forced to become soldiers, a preternaturally sensitive girl who is an artist, a rebel group that skirmishes with the rangers, and several other subjects. As a result, the book is simply all over the place, and the book's artists weren't up to the task of consistently illustrating the demanding subject matter that the writers crafted. It probably didn't help that this book is fictional, if inspired by true events, and suffered from some cliched characterizations and situations. There are some striking images to be found, but the book ultimately comes off as amateurish despite its ambitions. 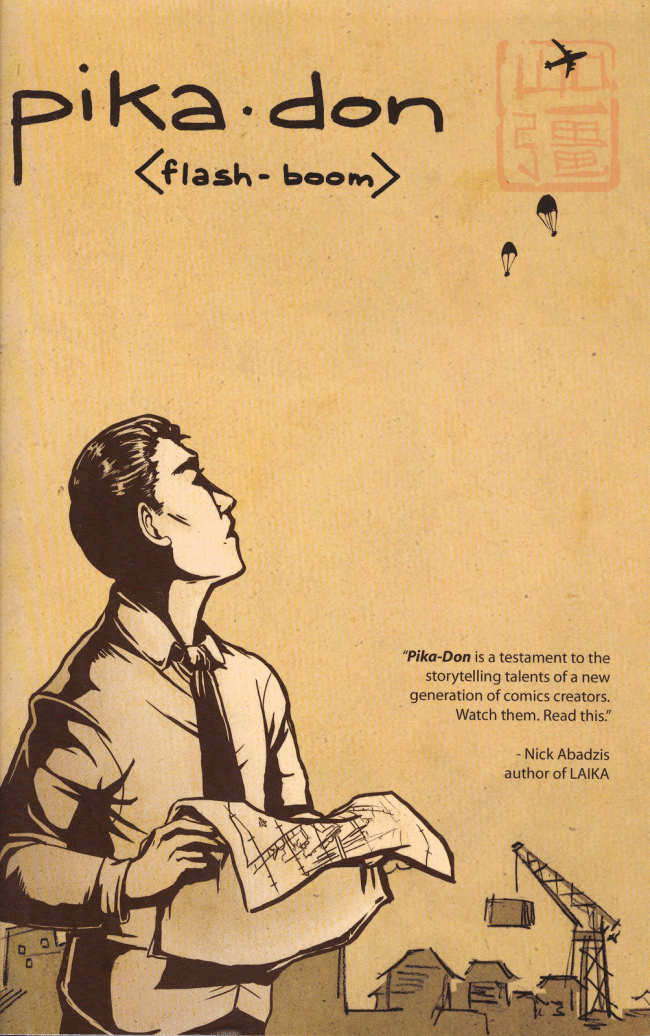 The Project found a sweet spot in year three, with Pika - Don <flash - bom>. This is the story of Tsutomu Yamaguchi, who was one of the few people to witness and survive the atomic bombings of Hiroshima and Nagasaki. Owing a debt to Keniji Nakazawa's Barefoot Gen, this book is a success in part because of the information available regarding Yamaguchi, as well as the team's relentless pursuit of details that could humanize an unthinkable experience. Though this is a simple story of survival, there are enough real-life dramatic twists and turns to make it a compelling read throughout. Graphically, it's by far the most interesting-looking of the GNP books. The use of spot yellow is highly effective in illustrating the pallor that came over Japan both literally and figuratively after the bombs were dropped. 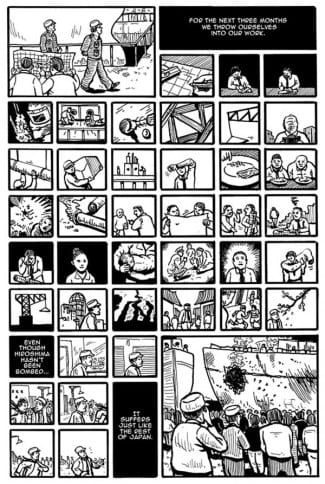 This class had nineteen students in it, who created the comic over two semesters (a twenty-week period). Simplifying matters by paring down the book's cast of characters and shortening its length (this one came in at 175 pages), the members of the class didn't allow their ambition to outstrip their ability. With several members of the class participating for a third time, the book also had a steadier hand as everyone involved simply seems to have known what they were doing. It helped that Yamaguchi himself was such a compelling figure. He was a poet and author in addition to being a naval engineer, and his own quotes and poems about the bombings are fascinating. The dramatic subplot of handing sealed letters to his wife instructing her to kill herself and their infant son if the Americans invaded or he failed to return from Hiroshima injected an extra jolt of adrenaline into a story that already has quite a bit of suspense. The crew elegantly navigated certain plot-related storytelling difficulties that, though fictionalized, fit in smoothly with the rest of the narrative. While this book is not as pointedly political as the first two entries of the series, it still brings home the point about the collateral damage that is amassed during war, especially in the way war is waged in modern times.

The 2011 entry, From Busan To San Francisco, is the one that seems most clearly influenced by Archer's work. It's based on a real-life account of one young woman's experience of human trafficking, but its episodic nature and lack of affect render its impact curiously muted. I understand that the artists were not trying to sensationalize or exploit a harrowing, dehumanizing experience, but the account was frequently so matter-of-fact as to feel too restrained. Like the first volume in this series, this book would have made a powerful 20- to 25-page story, but it felt padded at 145 pages. Archer and the new editorial team of Shimon Tanaka and Scott Hutchins added another level of difficulty by adding tri-color shading, dipping into shades of pink and purple. I'm not sure what this added to the work; in fact, I thought the color detracted from the line work at times. 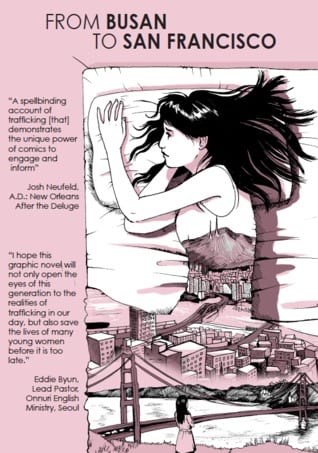 There are other design problems as well, like the left-justified blurb quotes that appear on the front cover, the small font for the title, and a drawing that should have been made much bigger. On the other hand, the quality of the penciling throughout the book is solid and descriptive, and there are some clever solutions to storytelling problems throughout. Even if the story takes a long time to get going and we get little insight into the character of Mido, whose debts and some bad choices land her in a human trafficking ring that takes her away from her native South Korea, the book still lands enough narrative punches to gain the reader's attention. In particular, the book is an interesting companion piece (and corrective) to Chester Brown's Paying For It, demonstrating how some of the prostitutes he saw in that book might well have been in the same position as Mido.

I think the GNP's mission statement makes it unique in comics pedagogy, even if it has nothing to do with comics per se. Using comics for political or didactic purposes is not exactly a new idea, but it can result in some interesting work if the artists are careful to engage the issues rather than simply lecture to the reader. Archer's own work is a testament to this, with his fact-based but pointed comics about any number of human-rights and corporate abuses, as well as brutal political intrigues. The continuing success and relevance of the magazine World War III Illustrated is another testament to the power that comics seeking to speak truth to power can have. However, the one common trait these works have is that they combine a number of voices doing short stories. 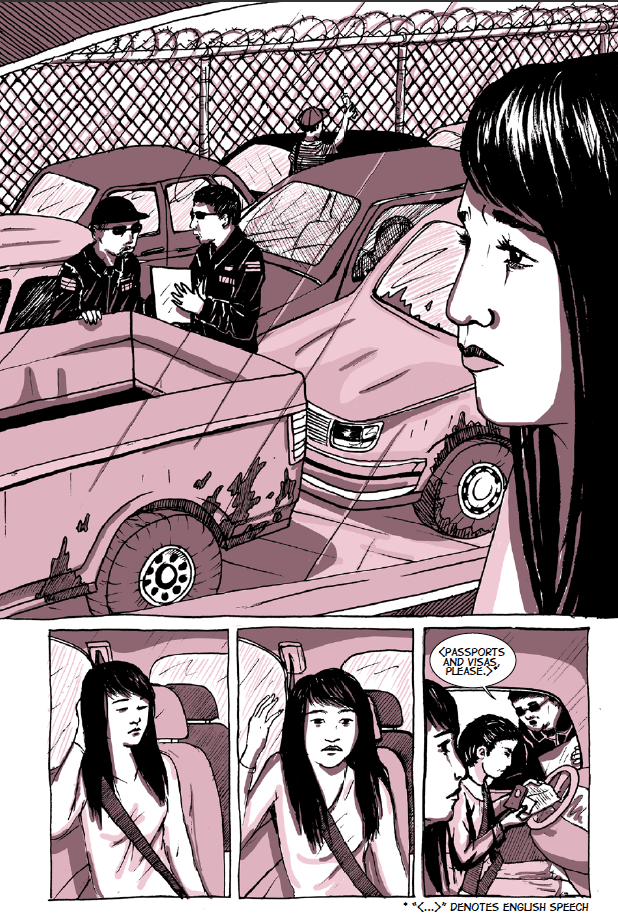 It seems counterproductive and counterintuitive to create comics by committee the way the GNP has been established. It seems to have led either to too many cooks spoiling the broth or else some members of the project feeling less invested than others in terms of who actually does the work. The books obviously went through a number of critiques just to get them in the state that we see them in now, which seems a waste of energy just to get a number of different pencilers on roughly the same page. The solution is obvious: given that there are 21 students in each class, the class should be divided into groups of three: one writer, one thumbnailer, one penciler/finisher. Each group would be assigned to do a 20- to 25-page story on a subject they all can agree on (surely a simpler task than getting an entire class to agree), and the results published as an anthology. While there may well be disparate subjects covered in each volume, it would still stand as a book that documented pressing issues in a given year. Breaking the project down into smaller groups would also hold each group of students personally responsible; there would be no sloughing off work onto the more dedicated as it frequently happens during group projects. If the project's editors insist on eschewing the use of the word "comics," then they could simply call it a "graphic short story anthology." What's clear is that Stanford has established an interesting new tradition and has broken new ground for comics pedagogy. What seems less clear is whether they're truly getting the most out of their students and their potential as storytellers. Taking a hard look at each book and comparing them to the best works of comics journalism in order to see how they really stack up (rather than simply celebrate their existence) would seem to be a wise next step as the program continues to evolve. 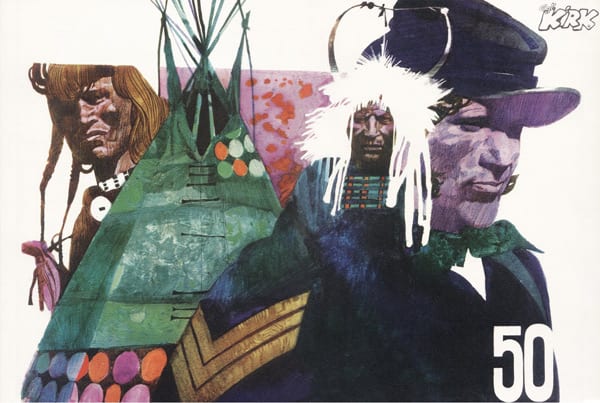 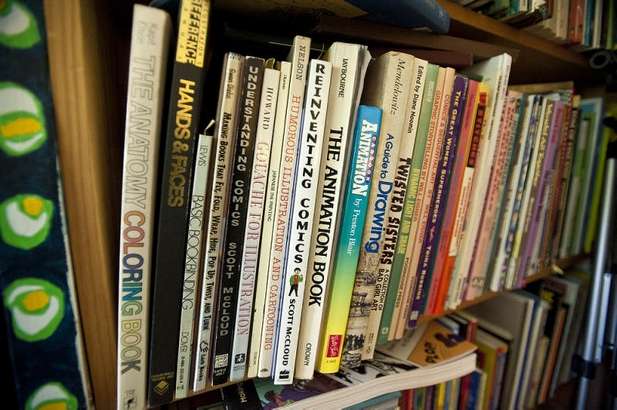