What's hoppin' true believers? Me, I'm still swamped with deadlines and drawing — but I am super pumped and chompin' at the bit to riff on something I heard on the radio. Some of you may know that I listen to the remarkable radio station WKCR out of New York every single day. Jazz, classical, opera, blues, reggae — this radio station has it all. But really, I listen to it for the jazz. It's the best source for jazz education, the best place to go to school and learn about the music. I felt like I knew my shit before I became a KCR listener, but nowadays I feel like an expert. I can tell the difference between Duke Jordan and Al Haig playing piano. It's great. Thank you, WKCR!

So, what does this have to do with comics? Well, becoming a good jazz listener is a lot like becoming a good comics reader. I'm trying to collect information and broaden my understanding of these two American art forms. Two art forms that are a little over a hundred years old. One is thriving and one is dying.

This week on Thursday's Jazz Alternatives there was an interview with a member of the New York Jazz Initiative, an organization that holds workshops in New York area high schools to get kids interested in jazz. The idea is to have them play with professional musicians, and in doing so create a new audience for the music. Their plan is "to educate and inspire the next generation of performers and listeners."

During the interview there was a lot of talk about how the golden age of jazz has passed and now schools are churning out jazz musicians with nowhere to play. There are more players than listeners, really, so a new audience for the music has to be created lest it become "museum music."

I couldn't help but think about comics while I was listening to the interview. This might be a new "golden age" of comics but what if the audience just dries up in the next decade or so? Jazz was dominant on the radio and in nightclubs in 1960, but by 1970 jazz musicians were running out of places to play. I thought, "What's going to happen when all the comics shops close?" That won't happen, you say? Well, they said that about record shops, too, and now they are just about all gone. When the comics shops close, it means less places to sell your mini-comic or zine and less places for small publishers to sell their small print runs.

To my mind, there needs to be some sort of organized effort to to get young kids reading comics beyond Free Comic Book Day, which to me is still too focused on promoting corporate comics. It's great seeing new faces in the comics shop, but once a year? We can do better than that, right? And yes, there are lots of new "educational" comics out there about Lewis and Clark or Satchel Paige but I don't see us all rallying together to guide younger kids to read stuff beyond corporate comics and corporate manga. (Well, that's not totally true. The Carnegie Library in Pittsburgh, for example, has reading and discussion groups about non corporate comics.)

I'm thinking maaaybe smaller indy publishers could get together and do something like a workshop tour that would educate and develop a future audience. I think more free shows like TCAF and the Brooklyn Comics and Graphics Festival that attract a wide variety of people to the art form would do us all good. We need to move beyond Comic-Con and all the bullshit, folks. They don't give a damn about the kids actually learning something. It's just about money and movie deals. I feel so divorced from that world these days, don't you? And it makes me think, "What's going to happen when all the movies start tanking and the whole house of cards implodes?" What if the digital releases all fall flat and no one is making any money at all? At least with the Comic-Con corporate comics crowd there are readers versed in comics who jump ship and swim over to indy island. So, we get a few new readers every year when those folks realize that what they are reading is just corporate advertising. That's good. I mean, corporate comics are still comics. But I just don't care about them any more. I think they are ruining the form - killing it, actually.

Again, it makes me think of TCAF and the effect that the show actually has on the community of Toronto. It's educational, it promotes literacy and it's free! It's not about the money. It's about creating a new audience and laying a foundation for the future. I remember meeting a young Michael DeForge there during the early years of the show's existence. I know the festival fostered his talent and gave him a platform to express himself - and now he is one of the stronger young voices in comics. And his example has shown kids younger than him what is possible. What if there were TCAF-type festivals in other cities to promote a different view of comics than what we see in the mainstream press? It would help us divorce ourselves from this ugly marriage of comics and Hollywood that has taken over our little subculture. 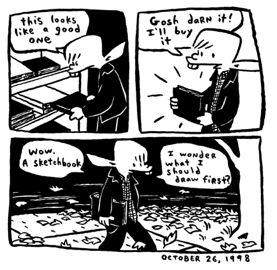 The Bottom of the Slide 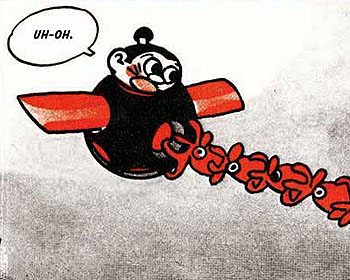