Today at The Comics Journal, we've got a packed day for you. First up, we've got Daniel Schindel's look at a couple of Dead Reckoning's launch titles to see what they have to say about this new comics publisher. Later this week, Daniel will return with an interview with the publisher.

Since Dead Reckoning is an offshoot of the Naval Institute Press, the publishing arm of the U.S. Naval Institute, one might peruse these graphic novels with a suspicious eye. What’s the angle? Where’s the propaganda? The USNI isn’t part of the government or military, but a good deal of its leadership consists of retired Navy or Marine members. War comics have experienced a boom in first-person accounts and journalistic ventures in recent years, but comics coming from an “official” source will for many conjure images memories of Superman hawking war bonds and Captain America punching Hitler. But both Trench Dogs and The ‘Stan are aware of and in conversation with this history. They aren’t dashed-off efforts, but involve talented artists not previously known for working in this genre. Dead Reckoning, then, is asserting their seriousness as a comics publisher.

Today's review comes from Rich Barrett, and he's taking a look at nbm's recent translation of Annie Goetzinger's The Provocative Collette. Like the rest of us, he's curious to see more of the artist make its way to English.

With a background in costume design, Goetzinger always focused on complicated, beautiful women and in Colette she found an ideal subject, one who was both a fashion icon and an early prototype for modern feminism. We see her depicted in a variety of fashion-forward outfits that range from shoulder-baring ball gowns (racy for the bourgeoisie at the time) to demure school girl outfits to breast-baring stage costumes. Colette is responsible for creating some iconic looks including the “Claudine Collar” worn by the protagonist of her first novel and Goetzinger seemed to relish rendering every last swatch of fabric.

Over at Popula, there's new comics up from Meghan Lands and Beatrix Urkowitz, both of which are excellent.

The latest in the Cómix Latinx interview series is up at Comicosity, this time around, it's with Ale Juvera.

Diversions of the Groovy Kind gears up for Halloween by digging up some a collection of some very specific advertisements.

Over at Your Chicken Enemy, Kim Jooha takes an insightful dip into Conor Stechschulte's Christmas In Prison. And I just correctly spelled Conor's last name from memory.

Over at Pop Matters, there's another review of Julie Doucet's Dirty Plotte to be found. You can never have enough Doucet, if you ask me. 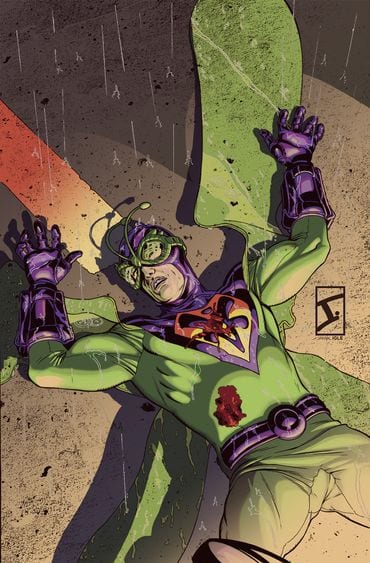 “I Spent Seven Years in the Belly of the Beast”: An Interview with Jamal Igle