“While at Rikkyō Middle School [a Christian institution],” reports a celebratory catalogue on Matsumoto Katsuji’s career published by Sanrio in 1985, “he [Matsumoto] was part of the artistic gymnastics club. The boxing club he himself created. He trained hard and was a fit sportsman. Confident in his physical strength, he once got in a fistfight with a hardened delinquent in the Ginza, but was knocked unconscious with a brick to the back of his head. Later when the police from Tsukiji Precinct showed up and asked Katsuji what the guy looked like, he responded with a quick and deft drawing. . . . On another occasion, he threw a group of troublemakers one by one out of a train car and onto the Ōmori station platform. As these episodes from his middle school years eloquently attest, he was cheerful and big-hearted, with a strong sense of justice. It is an image of brawniness in stark contrast to that of the artist who drew delicate and cute shōjo pictures.”

Last time, I provided a brief overview of Matsumoto Katsuji’s early career, in honor of an excellent retrospective at the Yayoi Museum in Tokyo. I argued that Matsumoto’s famous Kurumi chan (b. 1938), oftentimes seen as one of the first commodity icons of Japanese kawaii, was probably based on a mix of Grace Drayton’s New Kids dolls and American jazz age cartooning. This time I want to focus on The Mysterious Clover (Nazo no kurobaa), a sixteen-page comic published as a premium insert furoku for “a girl’s best friend,” the magazine Shōjo no tomo, in April 1934. There’s a buzz around the manga’s formal innovations, and in a future article I will add my two cents about them. First I think it useful to see how Clover introduced a novel character type – a type reminiscent of the athletic and righteous young man described above, and thus more in line with stereotypes of proper Japanese boyhood than those of prewar shōjo culture, even though the character is a girl. It was a type, as we will see, that additionally reflects the influence of a specific form of American masculinity.

A key issue here is status of the otenba (tomboy) within shōjo manga. Traditionally it has been said that tomboys first appeared in shōjo manga in the late 1940s, specifically in the work of Kurokane Shōsuke’s Anmitsu hime (1949-55). Given Clover and Kurumi Chan, it is clear we must at least date the type’s beginnings more than ten years earlier. If one includes Kitazawa Rakuten’s Tonda haneko (1928-?) – which is not shōjo manga per se, as the periodical it was in (Jiji manga) was for adults – then we must go back yet another half-dozen years. Prewar shōjo manga is so under-researched that it’s better not to make any assumptions about primacy at this stage. But I have the suspicion, based on the little that I have seen, that once the early history of shōjo manga is better known, it will turn out that the tomboy was by far the dominant character type. It is, after all, a type more suited for a medium that, at the time, was premised on humor and physical movement. The tomboy is also a natural fit for stories about prepubescent girls, whom manga were mainly for and about until the 50s. While Deborah Shamoon, in her book on shōjo culture, has emphasized the influence of themes of “passionate friendship” and the imagery of wistful and waifish jōjoga upon early postwar manga through figures like Takahashi Makoto and Maki Miyako, having perused the shōjo shelves of kashihon manga at the Aomushi Shōwa Manga Library as well as Yonezawa Yoshihiro’s magisterial catalogues on postwar shōjo manga for Bessatsu Taiyō, I can safely say that the field was far more diverse than that and heavily populated with tomboys and other brash and animated female types. As I will suggest below, this alternate history of shōjo culture probably originates in the phenomenon of the moga, the liberated “modern girl” of the 1920s. Maybe this is also the prehistory of the so-called “beautiful fighting girls” (sentō bishōjo) that began proliferating within manga and anime in the 80s.

It is important to note at the outset that Clover, a masculine teenage female hero, is something more than a tomboy. The tomboy, Judith Halberstam has argued for the American context, has been a relatively socially acceptable type of “female masculinity.” “Tomboyism tends to be associated with a ‘natural’ desire for the greater freedoms and mobilities enjoyed by boys. Very often it is read as a sign of independence and self-motivation, and tomboyism may even be encouraged to the extent that it remains comfortably linked to a stable sense of girl identity.” Developmentally speaking, tomboyism is a “preadolescent gender within which the adult imperatives of binary gender have not yet taken hold.” The problem arises when this boyishness continues into adolescence, at which point the pressures to conform to adult gender norms begin to strengthen manifold.

Kurumi chan is a child, and so in her case this question does not arise. In fact, as the manga developed over the years, Kurumi chan appears only to get younger. Clover, meanwhile, is clearly a teenager, and so one has to ask what she is doing still acting like a shōnen, and moreover like an Americanized shōnen, at an age when she should be preparing to become a proper woman. My provisional thesis below is that she represents a “reformed” version of the “modern girl,” a redirection of “Yankee girl” spunk and autonomy away from sexual promiscuity and frivolous consumerism (two things for which the moga was often criticized) and towards socially constructive moral character. Clover was an attempt to take the modern girl into an age, that of rising militarism and social control, in which she was no longer welcome.

Anyway, let’s get to the story. The Mysterious Clover opens with three panels with a shepherdess sitting beneath a tree upon a hilltop covered with clover. She reflects melancholically – one can see Matsumoto’s jojōga training coming in handy here – over the terror that has swept her idyllic European home. The good king has been forcibly deposed. A band of brigands now holds power. They loot villager homes at will. Those who refuse to submit are bound or swiftly cut down.

The shepherdess is stirred to action. Her first act of compassion and courage sends her diving into a river to rescue an infant that one of the brigands had rudely stripped from a mother’s breast and tossed into the water. Soon bags of money begin arriving through desperate peasants’ windows. One flying sack awakes a family on the brink of starvation. Another stops a man from hanging himself. To depict the transition from one house to the next, Matsumoto employs a technique rare in manga from this period: he intersperses thin column-shaped panels depicting houses silhouetted by night, and ends the sequence with a panel showing the sun rising above the trees. Such economical markers of changing place and time lay the groundwork for a future age in which manga would tell far more expansive stories.

Clover now takes the fight to the enemy. Brigands mysteriously appear bound and disarmed in the middle of town. In the dead of night, a shadowy form slinks over the castle’s walls. Bad men are discussing the problem around a table scattered with pieces of gold, when suddenly an arrow is planted in a neighboring column. A note is attached. “The bad must pay for their crimes. In the name of the lord, thou shall be punished.” As they frantically search for the perpetrator, a grappling hook swings down from the ceiling and swipes their loot. Looking up, they see perched, at a dizzying height on the rafters, a girl in red cape, black eye mask, and black tights. “Pardon me dear sirs, but I will be taking this money. It belongs to the good-spirited villagers after all. Ha ha ha!” She bounds from the rafters to the chandelier through the window and over the wall.

The masked hero begins to organize. Another letter appears, this one stamped with a red clover leaf. “Brave children, come to the south woods. Together we shall make the red clover green again.” They head for the woods. What is important art historically is how they head to the woods: in choreographed droves, like a flood of fleeing rats, like the children following the Pied Piper (more on this in a future article). One boy gets socked by his sister. “Hey, you stay home,” he had said. “Girls are useless. There’s no point in you going.” To which she responds with clenched fist, “How dare you! Boy, girl, it doesn't matter. In our hearts, we both believe in justice. Say what you said again and I’ll be leaving you behind.” This inspires even little sister to join the fight.

Quickly Clover and her gang turn the tables. Out in the woods, brigands on horse patrol are ambushed and clubbed in the head by children hiding in the trees. A team sneaks into the castle through baskets carried by an old lady, who is actually Clover in disguise. Others sneak in through underground channels. Foes are dispatched one at a time with swords and gimmicks like a jack-in-the-box armed with a fist. Clover, still in old lady costume, swings on a rope and knocks an entire phalanx over like a row of dominoes. The king is found stuffed in a cabinet drawer. He thanks his rescuers and honors Clover with an elaborate pageant.

Hurrah! The clover will be green again! 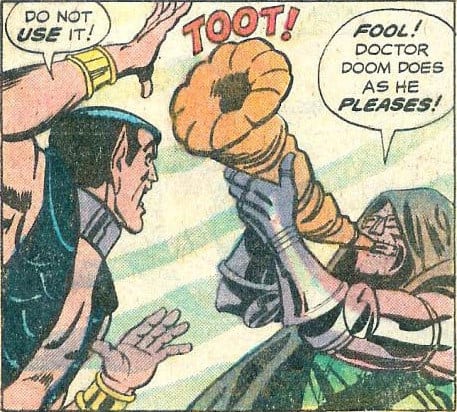