Bushmiller created an autobiographical character who looks like his creator. Named Phil Fumble, he is the title character in the "topper" strip that appeared at the top of the Fritzi Ritz Sunday page. Moving slowly down the page, Phil eventually became Fritzi's permanent beau, creating perhaps the only poetry in Bushmiller's oeuvre: in delineating Fritzi, the cartoonist had been inspired by his wife, so it was appropriate that his look-alike should be a devotee at the same shrine.

One of the founders of the National Cartoonists Society, Bushmiller received its Reuben trophy as Cartoonist of the Year in 1976. He continued drawing Nancy until the late 1970s when Parkinson's Disease rendered him incapable of drawing any longer. With assistants Will Johnson and Al Plastino to do the drawing, Bushmiller supervised the strip's production until his death at Stamford, Connecticut, August 15, 1982. In an act of the profoundly deviant admiration, the New York Times, which normally goes to press without a shred of cartooning in it, published a Nancy strip next to Bushmiller’s obit. The strip continues in circulation to this day: Al Plastino and Mark Lasky did it for a year after the creator’s death, then Jerry Scott carried on for the next ten years (giving Nancy a hideous make-over) through 1994, when Guy and Brad Gilchrist took over; they’re still doing it.

In its simplicity of graphic design, in its single-minded purpose, in its steady reliance upon verbal-visual blending, Nancy is in some respects the quintessential comic strip even though its title character has almost no individual personality. And that, perhaps—the strip’s quintessentiality—is the reason for its secret legions of devotees.

“One clandestine organization in particular has, for three decades, been associated with this cult,” Shannon Wheeler claims, "—the Bushmiller Society. It has no known headquarters. It sets up no tables at comics conventions. It has no web site. Yet Too Much Coffee Man (and other publications I know) finds itself relentlessly bombarded by the cult's aggressive guerrilla tactics. Surreal panels from old Nancy strips and rambling tracts extolling the brilliance of their creator arrive with regularity at this office. But they always arrive anonymously and bear different originating postmarks.

"I cannot attend a convention without seeing the ubiquitous face of Nancy stuck on the inside door of a public toilet or smiling enigmatically at eye level above a urinal. Stickers, buttons and wooden nickels bearing generic messages—such as ‘The Bushmiller Society Was Here’ or ‘Bushmiller Lives!’ and (my favorite) ‘Dare to be Dumb!’—show up on snack tables or similar locations at comics industry parties. Some professionals seem to take glee in pocketing the free souvenirs, but the host never seem to notice who placed the items there.

“Why Bushmiller?” Wheeler asks, his voice cracking plaintively. “What kind of people are attracted to a Nancy cult? And who is behind the organized weirdness?”

Most industry observers, Wheeler discovered, believe the power behind this cabal of cultists to be one-time underground cartooner and lately publisher Denis Kitchen. Wheeler tracked him down and confronted the elusive Sink magnate as recently as 2002.

Accused point-blank of being the mind behind the madness, Kitchen laughed it off, saying that he is to the Bushmiller Society as Jimmy Olsen is to Superman: “No one knows how to contact Superman,” Kitchen grinned, “but everyone knows that you can reach Superman through his best friend Jimmy Olsen.”

But Kitchen declined to admit even being a member of the Bushmiller Society—although he admitted some early contact with the “group.” He remembered being contacted by “an outfit calling itself the Society of Bushmillerites. I remember it because I sent a note back pointing out that ‘S.O.B.’ was an unfortunate acronym. The next thing I knew, they had changed their name to Bushmiller Society.”

Kitchen also admitted that, as a businessman, he was the first to recognize and exploit the “ancillary market” of Bushmiller fanaddicts, producing numerous Nancy reprint books and ancillary products. Otherwise, throughout Wheeler’s probing interview, Kitchen manages to evade or ignore every accusation that he is actively involved in the nefarious Nancy schemes and machinations. Until, that is, the very end of the interview. For what happens there—and for the entire revealing interview—you should Google “Bushmiller Society” and then click on the one the description of which includes “Denis Kitchen” and “secret cult.”

And now, a gallery of Nancys for your edification and amusement. Among them is a full-page autobiographical comic strip Bushmiller did for a series that Collier’s magazine published in 1948; in it, the cartoonist plays somewhat fast-and-loose with the facts, claiming, among other things, to have invented the Fritzi Ritz strip. 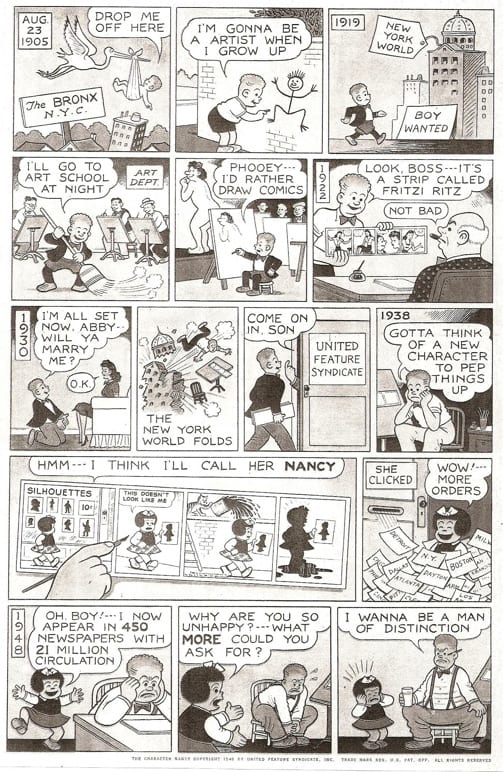 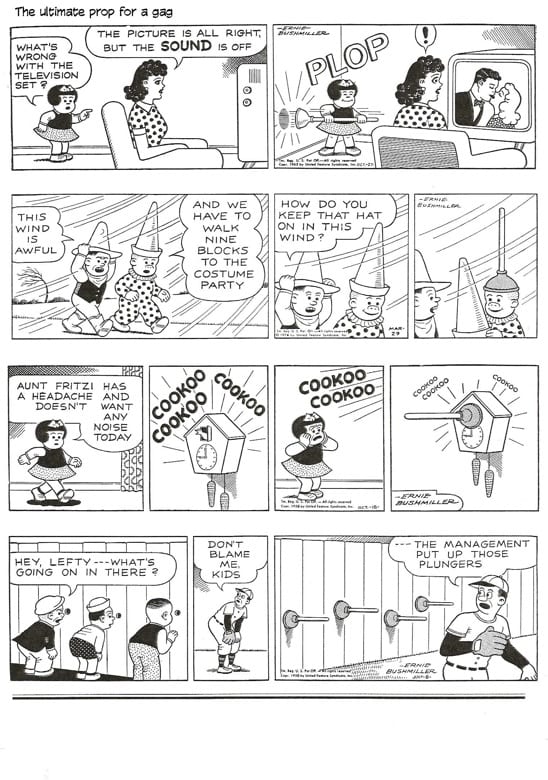 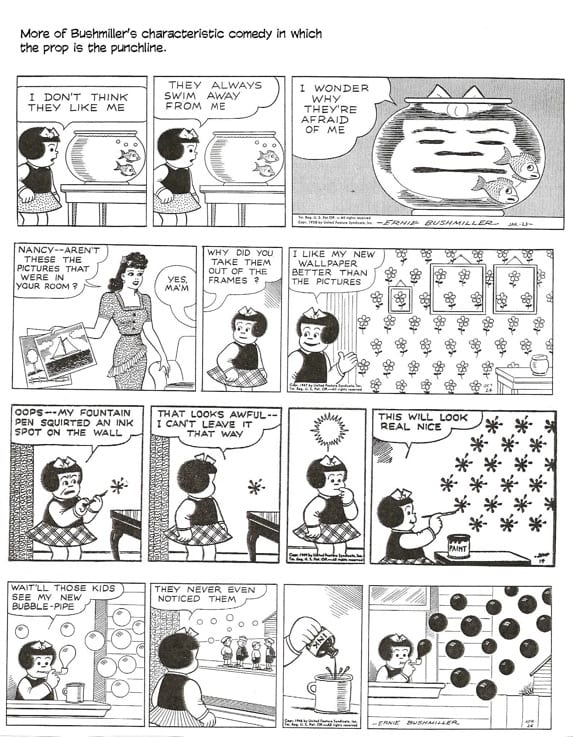 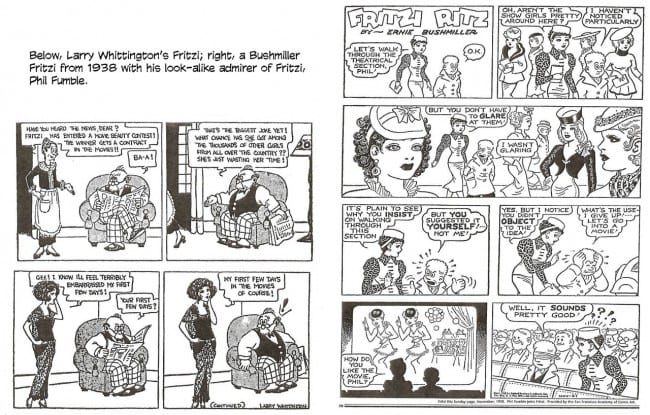 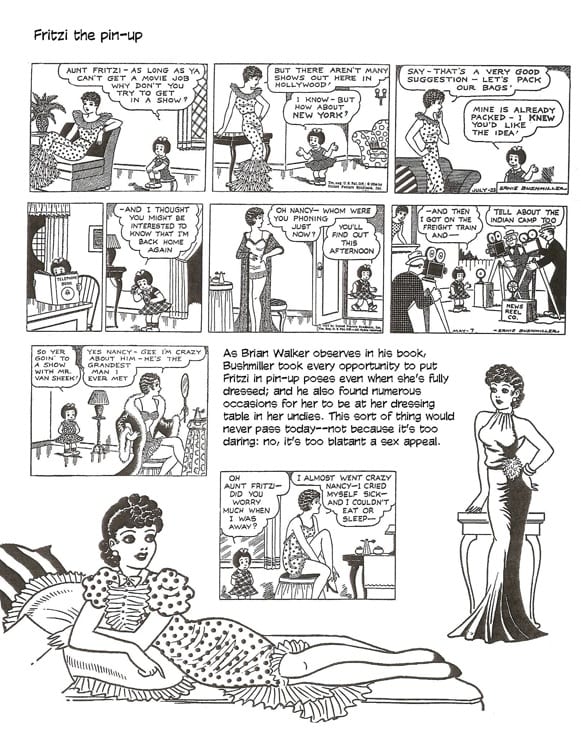 Bibliography. Although Nancy was one of the most popular comic strips of the 1940s and 1950s, very little has been written about its creator. Most of the biographical information contained herein can be found as chapter introductions in The Best of Ernie Bushmiller's Nancy, written and edited by Brian Walker, a 1988 volume that reprints a thoughtful sampling of the strip from throughout its run. Most of the illustrations I’ve used here were plucked from this book. Since Walker’s book, Nancy strips have been reprinted in various thematic collections; and lately, a “complete Nancy” series has been launched at Fantagraphics, beginning with Nancy Is Happy: The Complete Dailies 1943-45.
Pages: 1 2 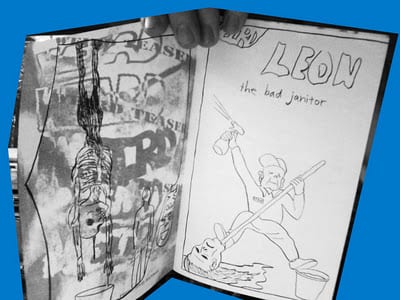 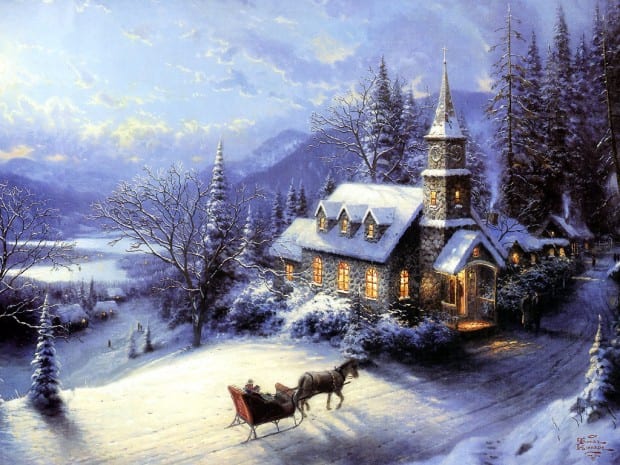