I’ve said this many times before and I’ll say it many times again, but one of the joys of webcomics is their ability to cover every possible subject and fill every conceivable niche. Say, for example, you’re into early Irish literature and you want to read it in comics form. Webcomics are happy to help you out. At this very moment, in fact, there are at least two ongoing webcomics based on the Táin Bó Cúailnge, or Cattle Raid of Cooley, the central epic of the Ulster cycle: Patrick Brown’s The Cattle Raid of Cooley and M.K. Reed’s About a Bull. Thank you, webcomics! You’ve justified the existence of the Internet yet again!

Composed sometime in Ireland’s early history and first written down in the 11th or 12th centuries, the Cattle Raid of Cooley chronicles a war fought over the Brown Bull of Cooley, a supernaturally fantastic bull that’s incredibly valuable and can fertilize like a billion cows. (Ireland at this time had a largely cow-based economy.) In one corner is Queen Medb, and to a lesser extent her husband Ailill, out to seize the bull from the people of Ulster. In the other is the hero Cu Chulainn, fighting for Ulster. Cu Chulainn has both might and right on his side, but Medb has the advantage of being awesomer than everyone. And so begin many battles that frequently consist of people throwing sticks at each other from across rivers, because this is not a technologically sophisticated culture.

Patrick Brown illustrates the greatest cow fight in literature in rough but naturalistic artwork with a European pen-and-ink influence. The teenage Cu Chulainn looks like a spiky-haired manga hero, which is a little distracting, but Brown’s stocky, swaggering Medb is right on target. This version of the story is grounded in historical realism rather than mythology, aside from the occasional appearance of entities like the Morrigan, goddess of war, and the god-hero Lugh. Brown only goes into a few of the remscela, the numerous side stories and myths that traditionally tie into the main narrative, focusing on the less fantastic, more historically plausible stories like the legend of Deirdre, the Celtic Helen of Troy, or the story of how Cu Chulainn got his name. (It means “Dog of Culann,” and comes from the time Cu Chulainn killed a dog and then made up for it by doing the dog’s job until the owner could get a replacement. That this is one of the less bizarre remscela tells you most of what you need to know about Irish mythology.) 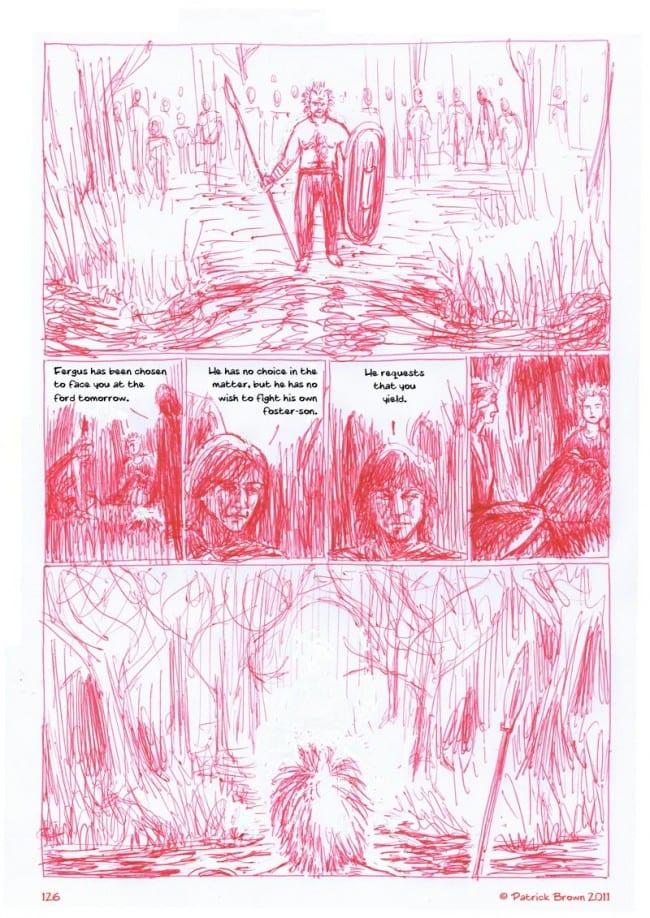 By placing the action in a meticulously researched setting with period-appropriate clothing, weapons, and even board games, Brown brings the saga down to a human level—a story of clan wars driven by personal vendettas and fought mostly in tiny farming communities. He captures both the over-the-top violence and the bawdy humor of Irish epics. In his notes on the site, he cops to being an avid scholar of history, and it shows in the amount of research that he puts into ancient Irish life.

The Cattle Raid of Cooley is a history geek’s labor of love. Running weekly since 2008, it’s currently nine chapters and over 200 pages long. It won Best Irish Webcomic in the 2011 Irish Comic News Awards (the Irish webcomics community is small but tight-knit). The art, all in blood-red ink, often looks unfinished; crowds are doodled in as stick figures, and you can see the Wite-Out and paste-ups. Figures are sometimes stiff and perspectives flat, but the characters’ expressive, detailed faces are rendered with care, and Brown is good at drawing animals and nature. And the story keeps plunging on, through battles and betrayals to the inevitable final conflict. 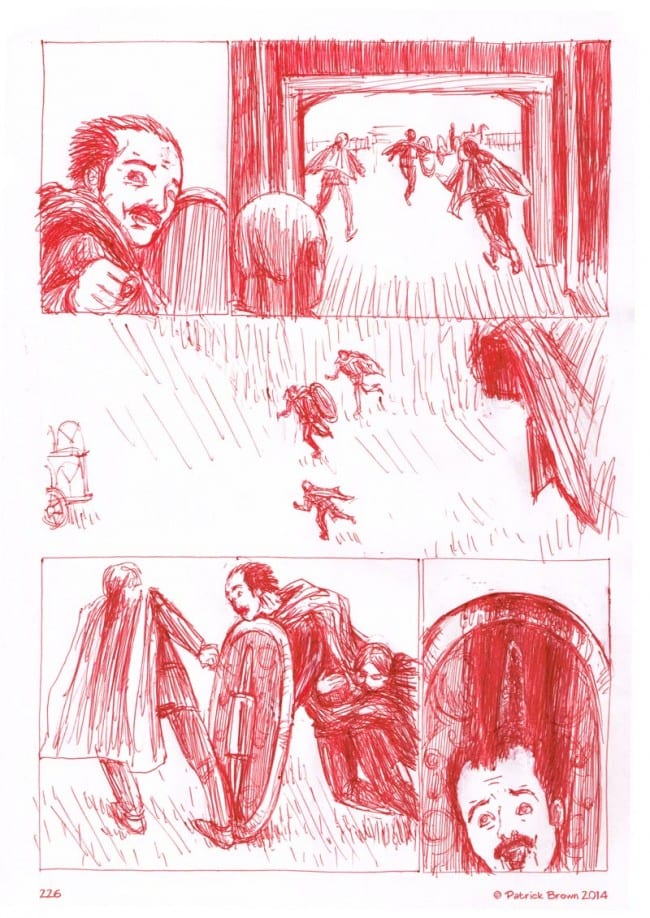 Compared to the massive scope and grim historical intensity of The Cattle Raid of Cooley, MK Reed’s About a Bull is a lark. Reed’s friendly, cartoony art, finished in bright watercolors, ushers the reader into a much more lighthearted version of the saga, with four shortish chapters completed so far. About a Bull focuses on the fantastic, colorful, and funny. In this version, Deirdre’s lover Noisiu really does have “skin like snow, cheeks like blood, and hair like a raven”—dude’s got some seriously red cheeks.

Whereas The Cattle Raid of Cooley is the story of Cu Chulainn, About a Bull is all about Medb. It opens with one of my favorite remscela, left out of Brown’s comic, in which Medb and her husband get into a petty squabble over which of them was wealthier before their marriage, which leads to the discovery that Medb is poorer by one cow and obviously needs to get the Brown Bull of Cooley to make up the difference. The focus on the women-centric stories in the saga also quietly plays up the unusual amount of power women had in ancient Ireland compared to most European cultures of the period; they could own property, they had the right to divorce, and they trained for war. 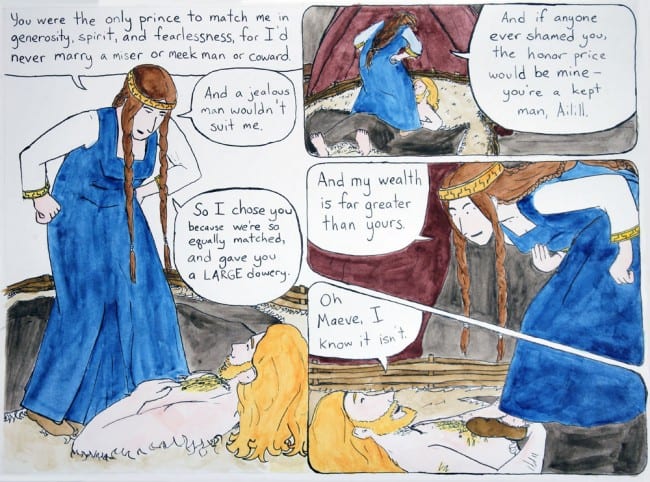 Reed plays up the goofiness of the material, rendering the action with cartoon simplicity and raunchy humor. One sequence ends with a character just thinking, “BALLS.” To be fair, the traditional Cattle Raid of Cooley does get goofy. There’s a remscela in which a pregnant woman is forced to run in a horse race and she wins and then curses all the men in the country with labor pains, is how goofy. Even with the lighter approach, Reed’s flat, simple art style is sometimes too limited for telling a story on this level. It’s an ambitious challenge for an artist who until now has mostly tackled contemporary fiction and autobiography. As the story approaches the central battle, things get darker, presenting Reed with new challenges (Medb’s consultation with a poet/soothsayer who predicts blood—“I see it crimson, I see it red”—is nicely unsettling).

But Reed has help. Many of the side stories and flashback sequences are drawn by guest artists, providing an entire additional set of visual interpretations of the saga. Caroline Kelsey does a Book of Kells riff to tell the origin of the priceless Brown Bull (it’s… complicated), and Farel Dalrymple blows everyone away with a startlingly lifelike take on the aforementioned pregnant-woman-horse-race story. Hilary Florido and Matt Wiegle team up for the convoluted story of how King Conchobar Mac Nessa, nominally Medh’s opposite number although he doesn’t do much in this particular epic, became king. About a Bull becomes a patchwork of styles and approaches, cleverly reflecting the structure of the original sprawling, digressive saga.

Read together (and obviously you want to read all the Cattle Raid of Cooley webcomics you possibly can), The Cattle Raid of Cooley and About a Bull illustrate the sweep of possibilities in comics storytelling. In different hands, the same material can be a stark historical novel about bromantic battles between men or a sly tragicomedy about women asserting their power. Both Reed and Brown seem to be having enormous fun with the story, albeit in radically different ways. At the end of the original Cattle Raid saga, THOUSAND-YEAR-OLD SPOILER no one gets the bull. But in comics, sometimes, everyone wins. 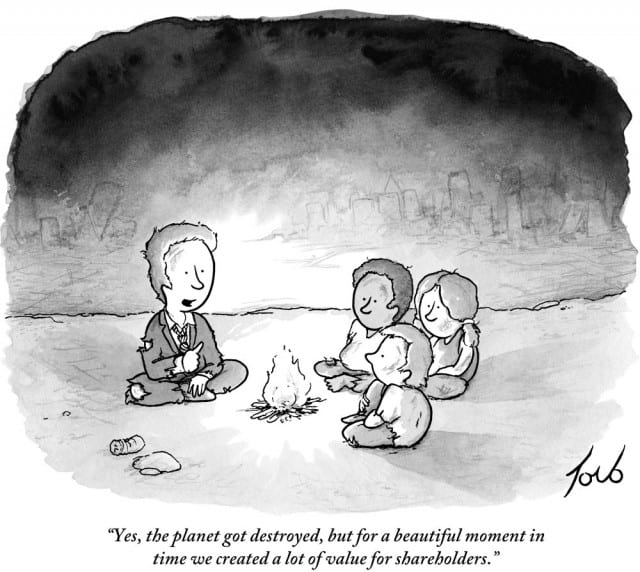 Money Is Being Raised 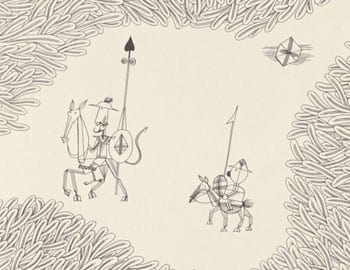