KIM THOMPSON: [Regarding Tardi’s current project about his father's World War II experiences]: Why did you wait so long before proceeding with it?

THOMPSON: That’s a reasonable answer. And are you doing it in black and white or in color?

TARDI: There will be three gray screens, three different percentages. My daughter Rachel is doing that, on the computer.

THOMPSON: You haven’t worked with gray screens for a long time. You did a lot of it in the 1970s and ’80s, but in the last 15, 20 years much less so. You’ve either used simple black line-work, or color.

TARDI: Mmmm. Well, it’s necessary in this case, because I need to set the moods. Black-and-white drawings … I was going to say that after a certain point they end up being tedious, but that’s true of gray tones as well — I mean, it’s not exactly resplendent colors

There is a lot of text, so I worry that … Because it really is one guy’s impressions, day-to-day life, the showers, the food, the reveille, the work. He ended up working on a farm for a while, because he was hungry. At the time he was a junior officer, so in principle he wasn’t supposed to work, but he let them take him anyway because he thought he’d be able to find something to eat at the farm where he’d be sent to work, he figured he’d kill a chicken or find an egg somewhere. Which turned out not to be the case at all. So that’s what it’s about: Hunger, these guys’ daily problems, dreadful things that were done within the camp, even among people who are in the same straits … and then, afterwards, as the war wound on, the arrival of the Russians after the end of the German/Soviet [Non-Aggression] Treaty, because they were right next door, and then this departure at 30 below zero, in the snow. We were talking about movies earlier — imagine the cinematic possibilities inherent in that kind of situation!

And, of course, they’re the losers. They are not given a particularly warm welcome by the American soldiers. Things would get better later on, but initially they aren’t welcomed very well at all, and as he put it, that makes perfect sense! That makes sense: we were the losers, we were nothing, we hadn’t put up much of a fight.

THOMPSON: And Americans do have a fixation on winners and losers.

TARDI: Right. So my father was convinced they had far more respect for the Germans than for the camp’s prisoners. Also, during that return trip, led by the German soldiers, they kept a list of the towns they’d crossed through, along with the distances traveled, in a little notebook — along with the food problems, what they’d eaten, how long they’d stayed, etc. And tracing it on the map, you realize that the itinerary they pursued was totally disjointed, they went in circles, etc. At that time the Germans had gotten into their heads, or someone had put into their heads, that they would now be charging the Russians alongside the Americans. That idea didn’t last very long, but that explains why they didn’t turn themselves over as prisoners right away. And during that journey there were still guards, who were vicious. The war was over for them, but right up to the end they were beating the prisoners with rifle butts, and one day my father said, “OK, enough of that, we can’t take it any more,” and the prisoners took five German soldiers, disarmed them, and hanged them on the side of the road. [Pause.] That was probably just days before the end of the war. And again, why did they hang them? They’d disarmed them, why didn’t they just shoot them in the head, why hang them? It seems complicated. Maybe they wanted them to be seen, because he said that when they saw them, the other guards took off and were never heard from again.

When they linked up with the American soldiers, it happened in a town in Germany, and there was a field in which the weapons that had been seized from the Germans were stockpiled. Specifically cannons — small-caliber ones, of course — with matching ammunition, and right away, I don’t know whether it was the French, the Belgians, or who — maybe the Americans — they used those cannons to bombard, to raze part of the village and shoot at the column of Germans who were fleeing the combat zones. It was the end of the war, these were the horrors of war, there was nothing glorious about it, but you have to understand their state of mind. They weren’t exactly living a passionate love story with Germany right at that moment.

So there you go. I think all of these stories need to be told, because these people have not been talked about much. And when French cinema took on those subjects, it was always with a slightly comedic edge, portraying the Germans as big dopes, gluttons, sauerkraut- and potato-eaters, and the French of course were clever, etc.

THOMPSON: Oh, Americans have plenty of movies and television shows like that.

TARDI: Yes. But I don’t know of any movies, American or French for that matter, that really tell the story of the day-to-day misery of these guys who brewed infusions with bark stripped from the poles the barbed wire was hung on, who spoke of nothing but hunger, hunger, hunger, hunger, hunger — you would’ve eaten anything. Who pulled potato peels out of the garbage … Now, they did receive packages from home, of course. They had the right to two packages a month. The Germans respected all that stuff, they’d signed the Geneva Convention. And anyway, if you don’t want me to mistreat your prisoners, don’t mistreat mine. (Which in 1943 applied to the American prisoners, but not to the French, since there hadn’t been a single German prisoner in France since 1940.) But anyway, when the packages arrived, they would be systematically opened, of course, to make sure they didn’t contain any weapons or anything along those lines, and the tin cans were opened with a bayonet, there was a soldier who, hunh! would jab in his bayonet, use it as a can-opener, and empty all of it, the jam onto the sausages or whatever, everything would be all mixed together, and the guy would leave with a sort of mush of all the food he’d been sent. His only option was to eat it all right away.

For his escape attempt, my father needed a compass, maps and money as well, which my mother sent him over a period of months — inside those jars of jam, in fact. How did he manage to communicate with my mother? The letters were read, censored … That’s another question that remains unanswered. And he managed to take receipt of all of this because there was a prisoner in the camp who worked in the mail department, who slipped him his packages, so they didn’t undergo the search and systematic destruction. Of course, there were some soldiers who took malicious delight in doing that, but there were also decent guys, and you should also bear in mind that most of the guards were older and some of them had fought in World War I, so they were less vicious.

So there is all of this human potential that needs to be evoked, needs to be told, because people do, as with World War I, with the poilus [slang for French infantrymen, especially during World War I] in their trenches, have a very stereotypical view. And so I’m going to try to deal with these different aspects, of course, especially the bitterness and the humiliation, the shame that my father felt and that he lived with, obviously very badly, to the end of his life.

Shortly before his death, there were times when he lapsed into a delirium, into a semi … not a coma, but an extended sleep. I was there, in the room, in the hospital, by his side, and he explained to me that at one point an anti-tank cannon had been getting ready to shoot at him but he’d shot first, there was already a shell engaged in the barrel of his cannon, he pulled it out in order to insert the appropriate shell, and he fired very, very quickly at this anti-tank battery, and then he crushed the two soldiers who were manning this battery; they rolled right over them. He stopped the tank to see what was going on behind him and there was this magma of meat, of crushed bodies that had passed under the tank’s treads, and he said fortunately they’d been given booze, very, very strong alcohol — they had it in their canteens — and that was what gave them the strength to continue on and go hide in the woods. He was 25 years old at the time, and those are very powerful experiences. He was visibly haunted by them for the rest of his life.

THOMPSON: Remind me what the title of the book is again?

TARDI: I think it’s a little long, but I wanted to call it Moi, René Tardi, Prisonnier de Guerre au Stalag IIB, Mon Retour et la Suite [I, René Tardi, Prisoner of War at Stalag II-B, My Return and What Followed]14 — in much smaller type, of course — because if you want to understand the story, it doesn’t end with the stalag.

THOMPSON: That’s an important point to highlight, otherwise you might mistake it for a Steve McQueen kind of deal.

TARDI: The Great Escape? You know, that took place in a camp that wasn’t far away from there: Sagan. That huge escape did take place, but it didn’t involve a single American [laughs] even though the star of the movie was Steve McQueen. It was basically Englishmen. If my information is correct.

In my father’s stalag, digging tunnels was out of the question. It couldn’t be done. On top of which, it was a gigantic camp, there were 15,000, 20,000 guys. There were several smaller camps. You can find the location of the camp on the Internet, you can see that it was very, very big, near a lake; you hit underground water pretty fast, so digging tunnels wouldn’t have worked.

My father didn’t talk about this, but the Belgian soldier I mentioned earlier, who was a prisoner in the same camp, told the story of the escape of two French soldiers who spoke perfect German. They made civilian clothes for themselves, they put on swastika armbands, and they walked around the camp, speaking German, one of them measuring things, the other one writing the measurements down in a little notebook. When German officers would come by and ask them what they were doing, they would explain they were there to do some work, and so they measured, they measured, they moved toward the exit, and they quietly walked out measuring for future work that of course did not exist. Now that story, which was described by this Belgian soldier, shows up in a movie, Jean Renoir’s last movie, which is called The Elusive Corporal [1962], which is adapted from a novel by Jacques Perret, who tells exactly the same story. So what’s up here? We almost come back to the issue of witnesses we spoke of earlier. Is it a myth? Is it a fictional story — which of course worked beautifully in a movie? Did it really take place? My father never mentioned it. It allegedly took place in the same camp. I may mention it, adding a caveat — although I have no reason to doubt that Belgian prisoner. 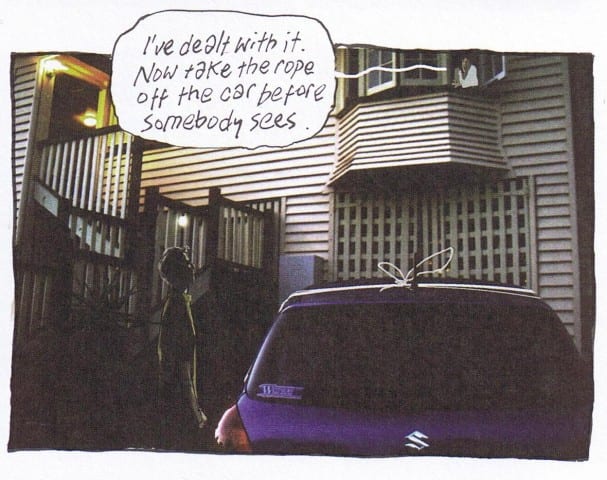 Weird Week on the Ward 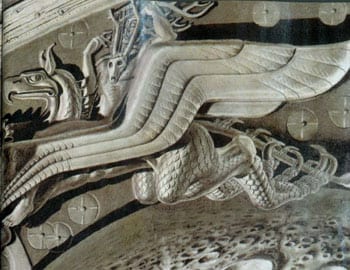