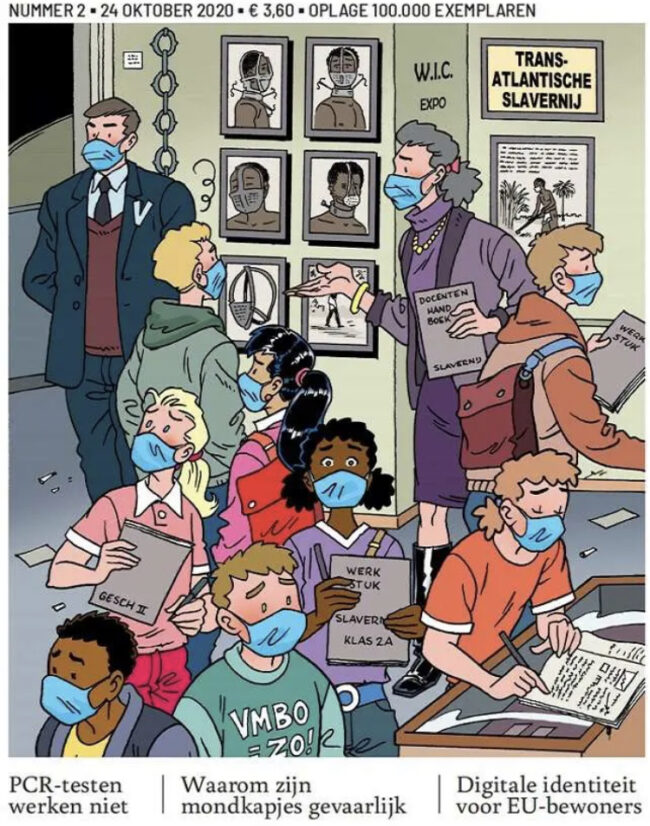 In August 2020, the Dutch were treated to a new alt-right publication called Gezond Verstand ("Common Sense"), a magazine boasting an instantaneous 100,000-strong readership and questionable points of view. It featured articles describing COVID-19 as a distraction from the intrusion of foreign powers into Dutch society, and dismissed anyone who critiques their climate change denialism as being a CIA agent. On its cover was a cartoon, drawn by cartoonist Eric Heuvel, of various political figures and a scientist jumping out of a box labelled WHO (meaning the World Health Organization) and frightening the general public.

It was issue #2’s cover, also by Heuvel, that created a real storm. On it, a group of schoolkids is being led around a museum in which there are artifacts associated with transatlantic slavery. In their hands are notebooks that have “slavernij” written on them. This being the era of COVID, they’re each wearing face masks. In the background are images of enslaved Africans in iron bits: muzzles made of metal, which were weapons of punishment, torture and public humiliation. The message of Heuvel’s cover is clear, and also disturbing: wearing a surgical or cotton facemask at a museum is the same as being enslaved. He doubled down on the argument in a subsequent interview with Willemien Schenkeveld for the Noordhollands Dagblad (NHD) newspaper, making the case that any form of government-led mandating was an infringement upon liberties, and akin to slavery. In response to being asked about whether he was worried about previous collaborators being unwilling to work with him in the future, Heuvel said: “I am critical, I consider it my job to be critical, and if clients don’t want don’t want me to be that way anymore, that really doesn’t interest me at all.”

Eric Heuvel is one of the Netherlands’ best known cartoonists; he is the 2012 winner of the Stripschapprijs ("Comic Strip Prize"), the most prestigious comics award in the Netherlands, which is awarded annually as a celebration of an artist’s entire body of work. Starting off in the late 1970s, Heuvel turned to comics full time in the 1980s, and -- advised by peer Martin Lodewijk -- adopted the clean line style. He’s been working relatively consistently on commercial projects ever since, being commissioned for well-funded (often publicly-funded) projects by institutions as diverse as the Anne Frank Foundation and Gemeente Vervoerbedrijf Amsterdam, the city’s public transport provider, as well as being a regular contributor to Dutch comics magazines and national newspapers. He also studied to become a history teacher in the early 2000s.

Lambiek's Comiclopedia explains that Heuvel has produced retro-styled comic series like January Jones, and has also worked on many commissioned projects, especially books for schools about World War II and the Dutch Indies. At points, his work has had a certain charm, although his covers for Verstand are particularly unattractive and lazy. In both style and content, he has tended to stick quite close with the status quo, although he has demonstrated an interest in liberal critiques of Dutch colonialism, as demonstrated by his recent involvement in an adaptation of the 19th century novel Max Havelaar, as well as the album Quaco (more on that below).

According to Facebook friends of his, Heuvel became increasingly critical of the coronavirus narrative on the platform since last March, especially concerning the mainstream media, which he called “meek sheep” in his interview with the NHD.

One of the most galling aspects of Heuvel’s art for cover #2 is the fact that he’s -- I’d presume consciously -- placed a black girl in the center of the image. She looks out at the audience, with a startled expression on her face, as if to say: “Look! I realize it too! We’re back in the bad old days.” I went to the Black Lives Matter protest on Amsterdam’s Dam Square last June, and, unsurprisingly, there wasn’t a single mention of masks in a negative way (some people even had spares for those who hadn’t yet got into the habit of keeping one on hand). There was, however, a lot of talk about institutional racism in Dutch politics: in its higher education system; in its policing policies; in the city’s architecture; and about Zwarte Piet, or Black Pete, a racist caricature often reproduced in cartoon form that white Dutch men dress up as around Christmas as family “entertainment”. It’s a character often defended by conservative voices in the Netherlands, often with arguments that employ “freedom of expression” and “tradition” as good reasoning.

What makes Heuvel’s involvement in this even more perplexing is that he’s well known for history comics, and drawing one specifically about the transatlantic slave trade. Quaco: Leven in slavernij ("A Life in Slavery"), first published in 2015, was a collaboration with Dutch scholar Ineke Mok, who initiated and wrote most of the book.

With both of its authors having an interest in pedagogy, Quaco, a biography, was designed specifically for schools, and even came with worksheets for students. Based on a true story, the titular protagonist was a boy who was kidnapped at the age of eight from the part of Africa now known as Ghana and the Ivory Coast; he was first taken to Suriname, and finally lived in the Netherlands. The book received support from NiNsee, the National Institute for the Study of Dutch Slavery and its Legacy, although that was probably thanks to Mok’s involvement. After being road-tested with children, public funds were used to distribute Quaco to schools, and it has been used in literature classes to teach about Dutch colonialism. It’s confusing and sad that Heuvel obviously knows the facts, but still drew that cover for Verstand #2. This is a good demonstration that it’s not only what you know, but how you know it, and how you process and apply knowledge.

It also begs the question: was Heuvel genuinely interested in understanding history when he worked for the Anne Frank Foundation and drew Quaco, or were those merely opportunities for a “critical” cartoonist to make some dough?

Tonio van Vugt, chief editor of Zone 5300, one of the major Dutch comics magazines, says that: “As far as I know, there was no prior relationship between Eric and Gezond Verstand. I heard from an insider that he was very honored to be asked by the chief editor, Karel van Wolferen, who is also a very controversial figure here in the Netherlands. I don’t know if Eric gets paid for his efforts, but I know he does it with full conviction. He got a lot of flack from his colleagues, and my personal opinion is that he will find that his previous collaborators won’t be so anxious to work with him again, especially after the ‘mask’ illustration. After I made a public comment on this -– how an artist that made an acclaimed graphic novel about slavery, could possibly make this blunt comparison -– our friendship on Facebook came to an end.”

In the Netherlands, there was public kickback against Gezond Verstand - the University of Amsterdam made a public statement claiming that it was a source of disinformation, despite the fact that van Wolferen is a professor emeritus. Nevertheless, issue #3 followed. Its cartoon cover depicts a gigantic Bill Gates sitting upon a Grecian throne, getting a UN representative to lead a cultish gang of political actors. Verstand, like all conspiracy-minded small government platforms, takes actual problems -- such as certain actions by the pharmaceutical industry, or the influence of the World Economic Forum -- and aligns them with totally unfounded concerns. This discourse has material implications: on January 23, a COVID testing facility in the Dutch village of Urk was set ablaze during an anti-lockdown protest.

Thanks to publicly-funded, audience-dominating, and generally-trusted public broadcasters, western European states have largely managed to stave off the sort of intensely partisan media landscape that characterizes the USA. That is starting to change. Decades-long campaigns against public broadcasters are coming to a head; meanwhile, there’s suddenly plenty of funds for YouTube channels and conservative talk radio stations ready to toe and proliferate conservative lines. It is depressing that cartoonists (and not even hack ones) are involved in this new wave. (It should also be said that state-run media has often manufactured consent for a small “c” conservative outlook, Italy being the most egregious example of that, but that’s another story.)

One YouTube channel that has acted friendly to Heuvel (and which the artist has himself promoted) is blckbx, whose site talks in worried tones about the increasing amount of "global governance" and the influence of "corporate states and NGOs". Of course, when it comes to their content, there’s not much in the way of knowledge arising from an analytical, historicized understanding of the complex world we live in now. In one episode, there’s just an uncritical host, Heuvel, and retired professor Cees Hamelink, talking about freedom of expression.

It would appear that there’s money to be made on the good ship alt-right. The visual mode is a powerful and often underestimated one for telling stories and proliferating ideas. Much of Verstand’s success (it’s currently on issue 19 and counting) will depend on the effectiveness of its covers, and cartoonists like Heuvel being willing draughtsmen of the conspiratorial, the reactionary, and the dangerous.

Eric Heuvel was approached via email to respond to the points made in this article, especially to clarify whether there’s any truth in the rumor that he has worked for Gezond Verstand for free, and if he has any thoughts on the controversy surrounding his recent work. At the time of writing, no response had been received. 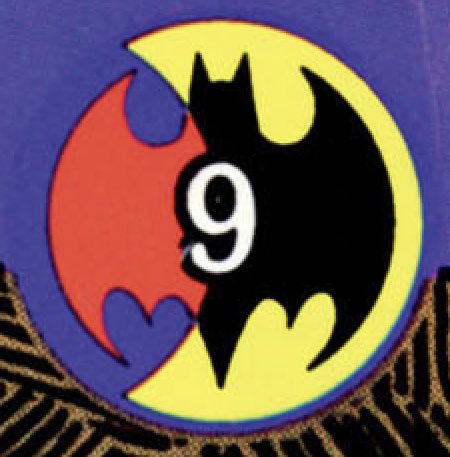 The Light That You Shine Can be Seen 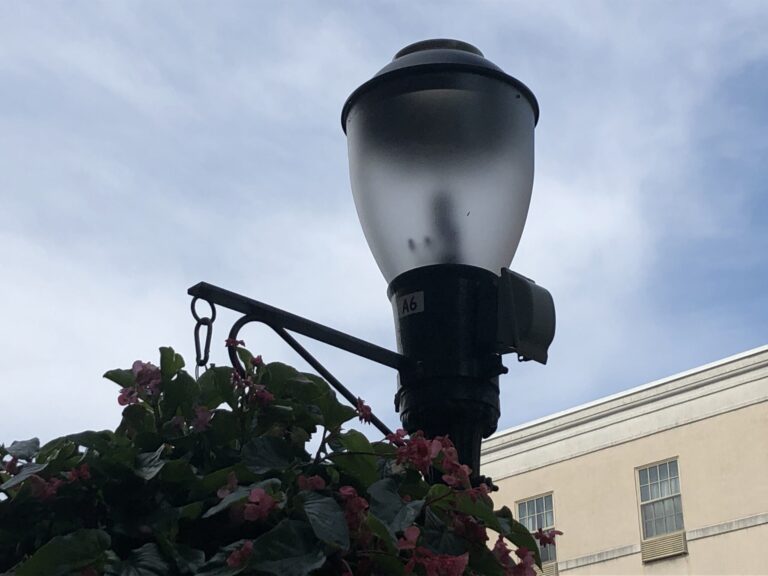 A Cloudy Day In Metropolis – This Week’s Links