Jeremy Baum's work to date represents that of an artist with a distinct visual style who is still finding his way as a storyteller. His comics and illustrations all revolve around the same set of subverted genre themes, as fantasy, conspiracy, and science fiction tropes are blended with his particular pet images. Specifically, Baum likes to draw variations on a particular female figure, one with bulbous, fleshy qualities. His women have pendulous breasts, long faces, big eyes, and huge teeth. Their fingers are long and spidery. Their bodies are frequently made into figures from the Tarot or Hindu mythology. His women are fairies, dryads, aliens, and goddesses, and their motivations are frequently hard to fathom. His work is deliberately enigmatic, inviting the reader to dwell on the image without spelling out its meaning. 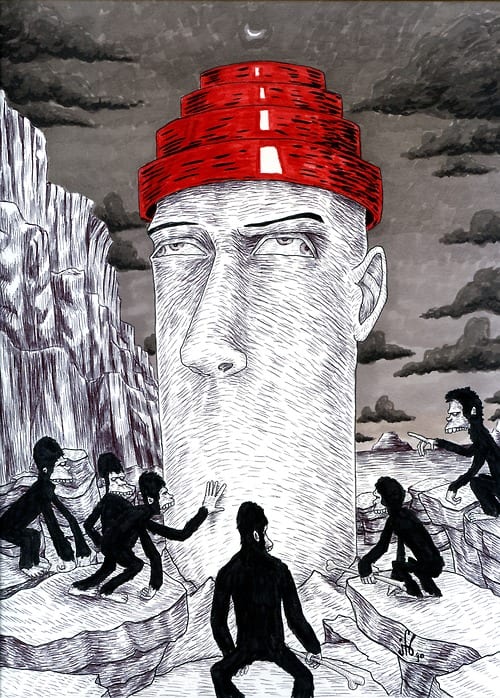 Baum self-publishes at a furious rate. He also publishes anthologies (Memory) and has published the work of other artists, such as Nils Balls and Diego Tripodi. Baum is part of the lively Pittsburgh comics and illustration scene, which seemingly makes little distinction between genre work and alternative work. It's instructive to consider Baum's illustration work first. In his color 8.5 x 11-inch minicomic Medley, Baum takes the reader on a tour of various captioned images; it starts off with his many human-animal hybrids, moves on to an exploration of BDSM ("Creature Comforts"), one of his many variations on amusing religious iconography ("Jocko Homo"), and one of his many images inspired by the Tarot. Certain visual trademarks are present in all of his drawings, like trees with branches that twist and fork upwards, a predominant use of the color blue, eyes turned upward in a kind of blissed-out trance, and a uniform line weight that is given more texture with Baum's almost neurotic use of hatching and small lines. His figures' fleshiness emerges because of those frenetic, insistent lines. The backgrounds are frequently trippy and surreal and the images themselves are mostly static, but taken as a whole in Medley 2 and 3, they tell us a lot about Baum's interests. 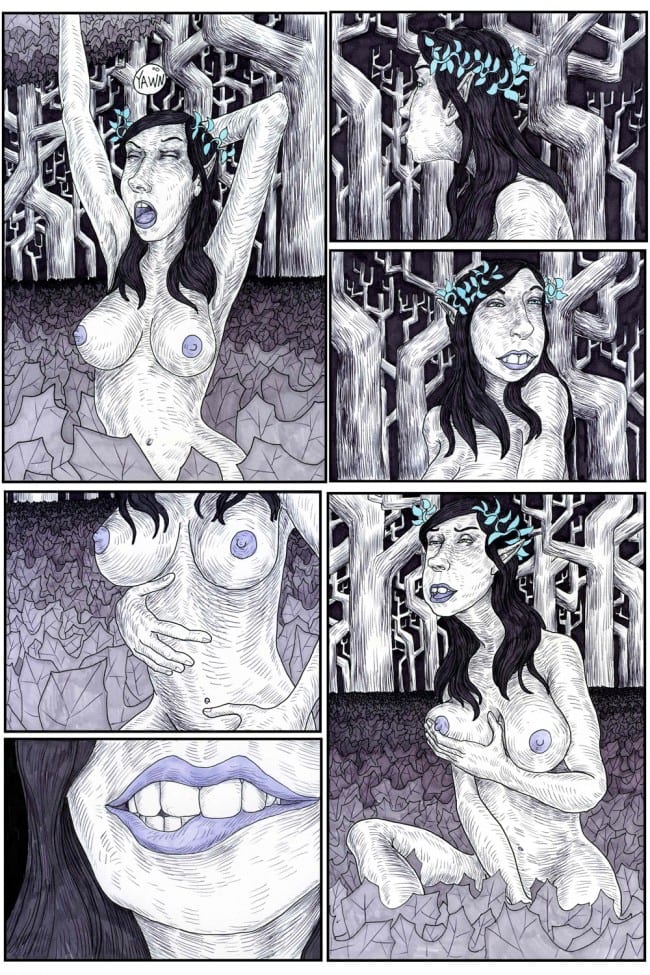 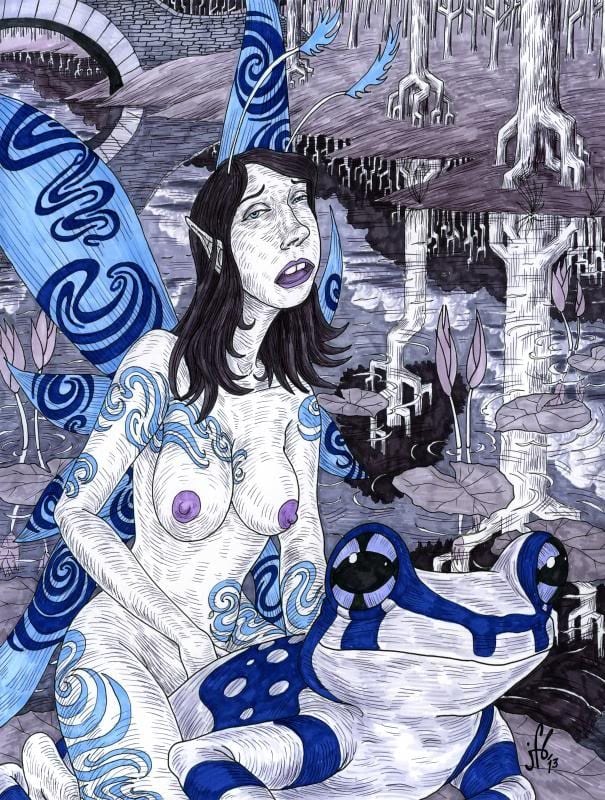 Sometimes, Baum plays that casual but weird erotic quality for laughs, as in "Something About Feet". Here, a character with his typical female form has wings and antennae; she sneaks up on a frog so as to startle it. When she falls back into the water, another fairy laughs long and hard at her. This leads to the two of them having sex, with the first fairy intent on licking the foot of her lover. Baum transfers this image of the foot in the next three panels as the frog grabs the first fairy's foot with his tongue (turning the foot as object of lust into an object of peril) and then swallowing her whole--except for the foot (turning it into a punchline). 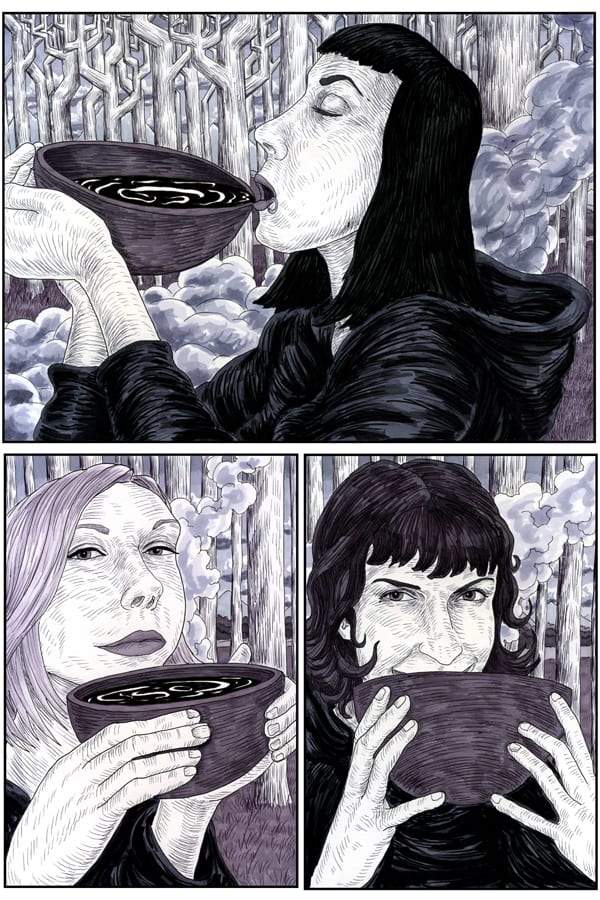 His female figures are not always eroticized. In "Murmur" and "Creation Story" (the latter written by Morgan Ritchie-Baum), the women are depicted as explorers unwilling to stand for mystical nonsense, or as a set of hardened goddesses ritually creating new life. The latter story appears as though Baum is using live models as a reference, because their expressions are so remarkably lively, real and knowing. Indeed, the expressions on his characters often indicate that they know something you don't, but that they aren't telling. Runes float about some of the stories and appear as tattoos on characters on other stories; Baum makes it unclear if they're mystical writings or alien script. In his world, there's not much of a difference.

Transcendental Masturbation features the stories "Diner", "The Faun", and "The Picnic". These stories are from 2010, some of his earlier material. Here, we can see the explicit influence of Moebius at work. Indeed, Baum's visual style can be described as a merger between Moebius's early, scratchy style seen in his Blueberry stories and the bright, trippy, and color-saturated Moebius of his later years. "Diner" is another Baum story marked by the presence of aliens, in they are portrayed as already here and in charge of your life. The silence of the strip helps create the sense of tension and inevitability that the man sitting at the diner is going to meet a horrible fate in some unspecified way. "Fawn" is more of a trifle, a chance for Baum to draw a deer with a woman's head as a kind of wacky metaphor for sexual predation and misogyny. "The Picnic" touches on another potential influence, Bill Plympton, with a figure's head crawling off its body only to be replaced by an insect toting a demon's head. That thread of body mutation and transformation seen in Plympton's work (especially his animation) is mixed with the sort of stillness and elegance of Moebius. This also plays out in the untitled final pages of the comic, featuring an environment filled with multi-eyed statues and an explorer silently trying to understand the meaning of this space. 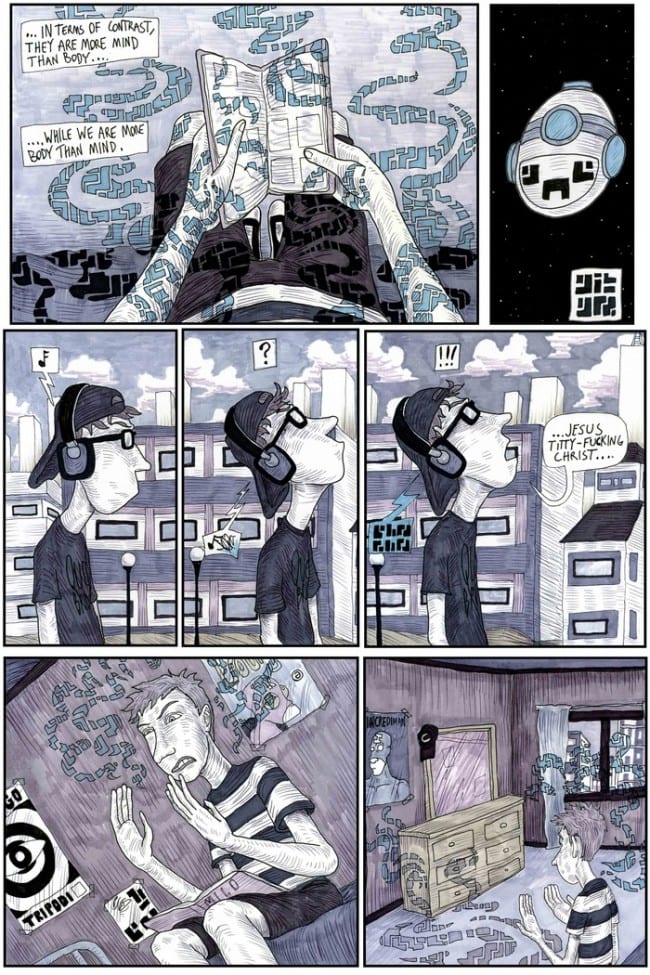 Extravagant Traveler is one of Baum's first long-form stories, and it's from 2012. Time distortion becomes a significant part of his narrative toolbox in this story, as it jumps back and forth in telling the story of Hans, a young boy who is abducted by aliens as part of an effort to save their race as well as humanity by mating with a female. Unlike the narrative in most stories of this kind, however, the abduction is not traumatic. Instead, it saves the life of a boy growing up in an abusive household, surrounded by bullies. There's a great sequence where young Hans is walking and reliving the names and provocations used on him, intellectualizing why they are so effective before snapping back to the actual, hateful words. Then he encounters the typical Baum female character (nude, big eyes, big teeth, but with an open third eye on her forehead and runes tattooed on her body), and we jump back and forth in time. The end of the story features the end of the encounter, when he's dumped back on earth with a full memory of all that has happened. It's transformative for him, but it also fills him with incredible longing, a longing that does not cease when we jump forward in time. It's hinted that it only increases when he senses his own progeny traveling through space, paying him an oblique visit. This is a beautiful, strange story that's cleverly sequenced in terms of its visuals, one that demonstrates Baum's potential as a storyteller. 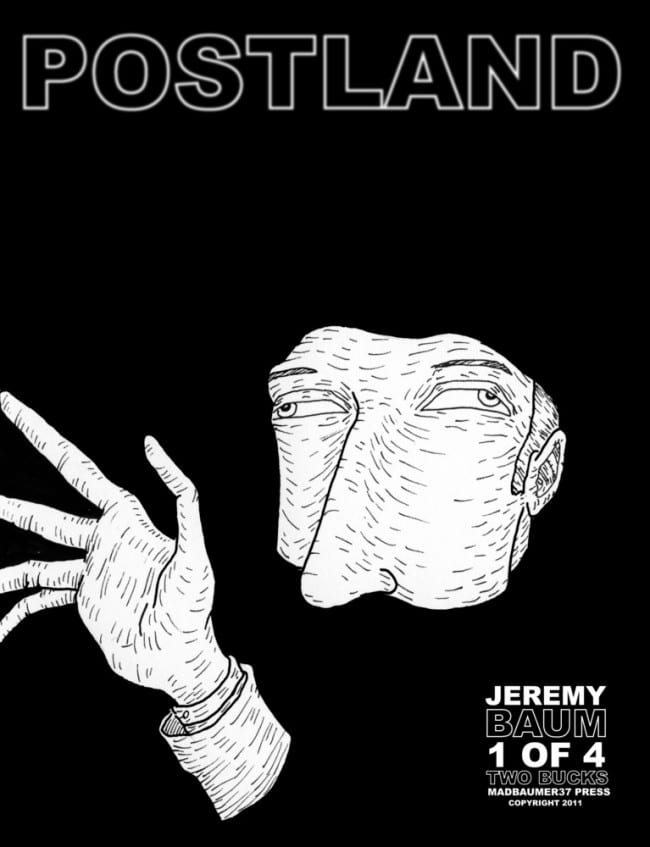 Postland is Baum's longest work at 136 pages, and in many ways it's a culmination of his work and interests to date. It's a black & white comic that's about a series of meetings between a man named Ivan and a woman named Claire at a diner and their recurring dreams. The looping, hypnogogic story structure keeps the reader constantly off-guard as to whether a scene is a dream or "real," just as it's a puzzle for the characters themselves. Nearly every Baum trick and trope is in here: dream logic, trips to mystical realms, nude women with that particular sort of long face and big teeth that he likes to draw, imagery from the Tarot and mythology, and the frequent sense that there's knowledge hidden just beyond our reach. It reminds me a little of David Lynch's film Mullholland Drive in the way that dreams and dreams about dreams impinge upon each other and muddle the characters' reality. Baum's fantasy images are contained and confined to that world of dreams, where they provide a mysterious but symbol-rich environment for the characters. That's a sharp contrast to how he here depicts reality, which consists of drab settings and tenuous attempts at communication on the part of the characters but also has an overwhelming sense of paranoia, confusion, and the sense that everyone else knows a secret that is hidden from you. This is Baum at his most cohesive, as he plays around with familiar genre conventions to create some surprising results. 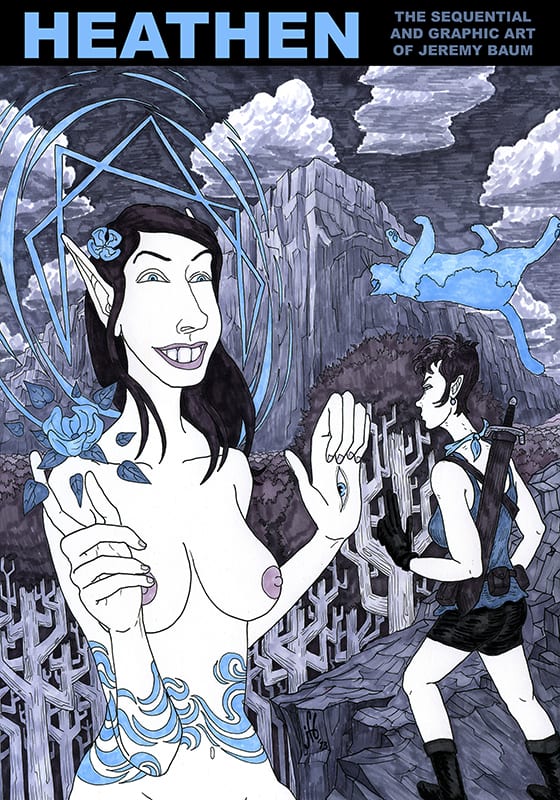 Much of the material discussed here has been collected in Heathen: The Sequential and Graphic Art of Jeremy Baum. This volume unfortunately is smaller 6.5 x 7.5" and strangely drops the captions for the illustrations. It contains the stories "Diner", "A Greater Hell Beyond", "Creation Story", "Murmur", and "Extravagant Traveler". This volume serves as a decent introduction to Baum's work, but his stories are best read in their original formats. One gets the sense that with the conclusion of Postland, Baum has finished cycling through his influences and is ready to emerge as a significant storyteller. There's no question that Baum has a distinctive enough style and a range of interests that are esoteric but appropriately splashy. What will make his comics richer and more cohesive is to continue to add new ideas, more fully-realized characters (as opposed to simple agents of environmental exploration), and a greater subtlety in how he integrates his pet themes and images with other kinds of stories. 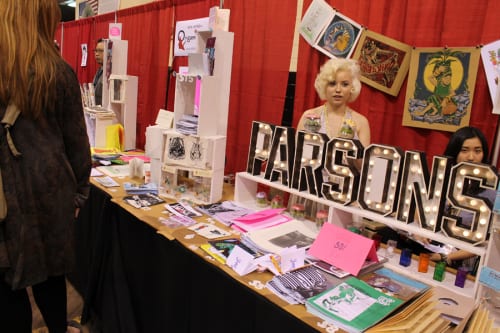 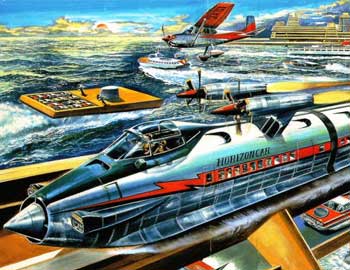