Argentina’s Francisco Solano López was a titan of South American comics, on a level with the great Alberto Breccia, the temporary honorary Argentinean (during the 1950s) Hugo Pratt, and the hugely influential writer Hector Oesterheld (who collaborated with all three).

Frank Santoro's back in full storyteller mode, talking about his recent trip to New York to collaborate with Dash Shaw. (There's another bonus Michael DeForge cartoon, too.)

One night I, Dash, Dan Nadel, and David Mazzucchelli went out to dinner. Dan and Dash have been around David enough times that they don’t get starstruck – but I still do. It’s embarrassing only because I drink too much and start yelling and Dan has do that hand gesture thing where he is saying calm down when Mazzucchelli isn’t looking. Whatever. I was having fun.

Now raise your hand if you [...] imagined that Starstruck must be either a campy sci-fi gender parody or a didactic exploration of how things would be different if women were in charge of the galaxy. The fact that it is not remotely either of these things is one of writer Elaine Lee’s greatest accomplishments. She pulls off the coup, engineers the genre sex-change, without our even noticing. She realized that she didn’t need to do much more than change who got the close-up; instead of Luke Skywalker, it’s the pilot of the fighter off to his left, who actually turns out to be the important one. Lee’s characters have long been there in science fiction; she simply makes them the protagonists and extrapolates from there. Starstruck’s feminism is both as invisible and as pervasive as air, and therefore an accomplishment in its own right.

Most readers of The Comics Journal have probably already seen Tom Spurgeon's essay from this weekend, explaining that his recent hiatus was due to a life-threatening illness. It's a moving and candid reflection on mortality, family, and life in the comics industry. (And the Green Lantern movie!). If you haven't taken the opportunity to look at it yet, you should. A must-read of the week, month, year:

If I learned anything that first 48 hours awake, it was to focus on the next event: the next breath, the next five minutes, the next question written on the notepad, the next time someone might come into the room. To my surprise, after a life of avoidance I'm not that bad at taking things as they come. Although come to think of it, no one carves time like an unproductive writer.

In the Sydney Morning Herald on Saturday, Robert Crumb wrote an open letter explaining the recent cancellation of his trip to Australia:

Sorry, folks. I do feel bad, as I hate letting people down. But I decided I'd rather bear the pain of letting people down than subjecting my long-suffering wife to a 10-day period of dread and anxiety for my well-being. She's been awfully nice to me since I told her I wasn't going! She baked a chocolate cake even!

I know, I know, it's galling to give the Sunday Telegraph sleazeballs the satisfaction. ''Ha ha, we scared him off.'' But they have already got what they wanted out of me anyway, which was to use me to make the City of Sydney look bad.

The worst part is the apparent irresponsibility of these cynical media hacks. What if I'd gone there, and what if some Mark Chapman-type person who'd read that article decided the world needed to be cleansed of scum like R. Crumb? (Mark Chapman shot John Lennon.) This possibility worried Aline deeply.

More on the decision here. And the Daily Telegraph (the tabloid that initiated the whole thing) responds here.

Finally, Eddie Campbell bought the recent Bill Mauldin collections, and writes about some observations that occurred to him while reading the cartoons in chronological order for the first time:

The first is that I am surprised to find that there is no break between the war cartoons and the post-war cartoons. They are continuous. The second is that in the middle of 1944 Mauldin appears to have decided to stretch the proportions of his figures from a normal height of seven or eight 'heads' to as many as ten heads (previously I presumed variations might be explained by pressing circumstances). 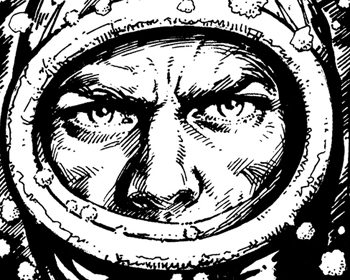 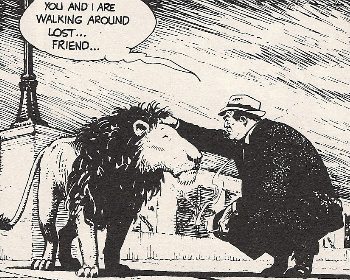